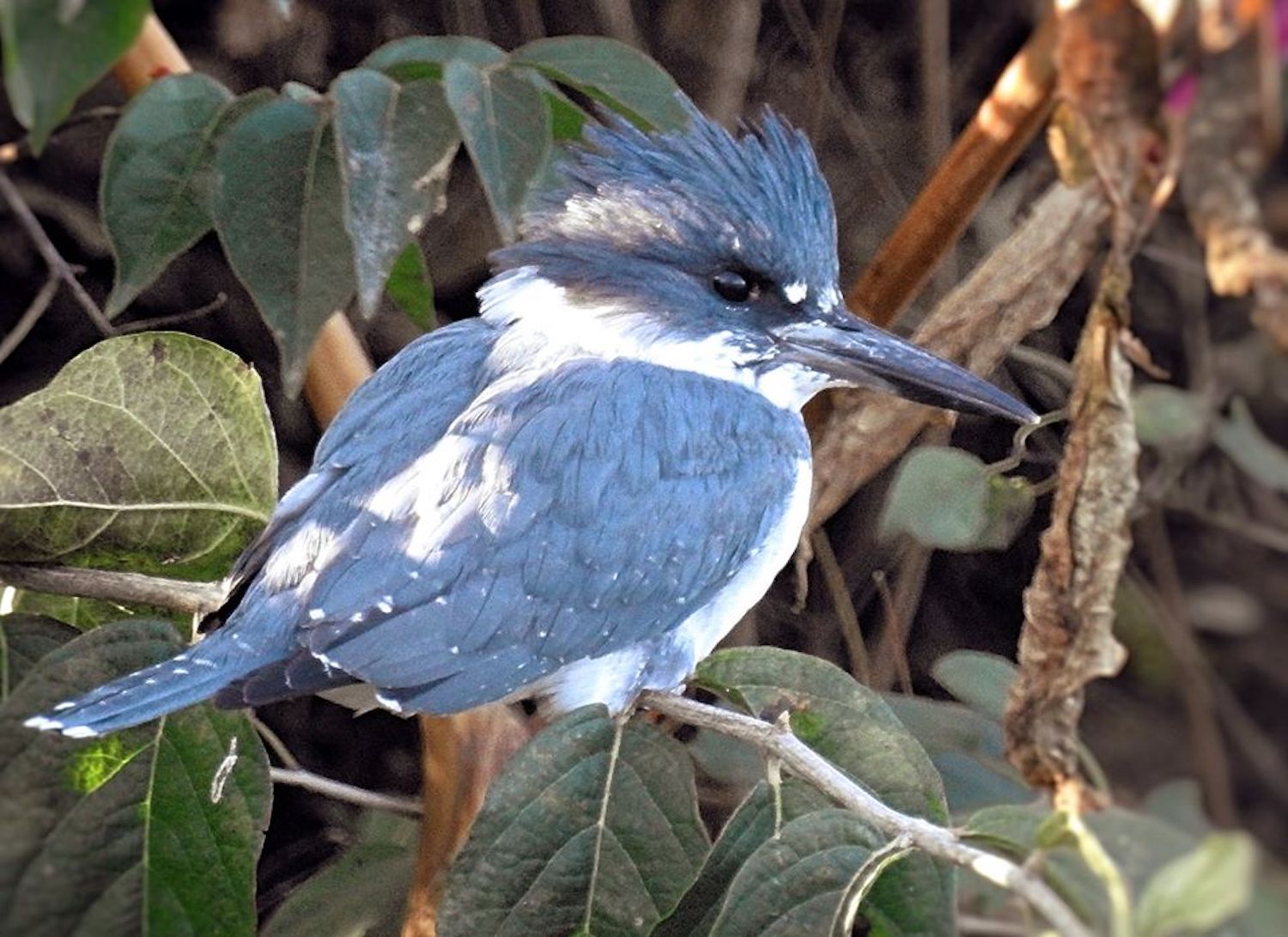 A belted kingfisher. (Photo courtesy of Arielle Cunnea via Will County Wildlife)

If you catch a glimpse of a dark-colored stocky bird with a big head and sharp bill near water, there's a good chance it is a belted kingfisher. These birds are about the same size as a robin, but they may catch the eye more easily because of their lopsided, top-heavy appearance.

However, with belted kingfishers, there's a good chance you will hear them before you see them, according to the Cornell Lab of Ornithology. That's because they have a rattling call that easily catches the ear.

Along with owls, belted kingfishers are among the few bird species that regurgitate pellets of undigested bits of their prey, such as small bones and shells, according to the Cornell Lab of Ornithology.

Here's some more information about these birds.

The belted kingfisher's scientific name is Megaceryle alcyon. The name is Greek in origin, Montana Outdoors reports. In Greek mythology, Halcyone was the daughter of Aeolus, the god of the winds. According to mythology, Halcyone angered the other gods, who then turned her into a kingfisher. Each winter, Aeolus would create calm winds so Halcyone could hatch her eggs safely.

This story in Greek mythology is the also origin of the phrase "halcyon days," which means a time of joy and peace. In Greek, alcyon is another word for halcyon. The "mega" reference in the bird's scientific name means big, so the scientific name roughly translates to, simply, big kingfisher.

Belted kingfishers have mostly blue-gray plumage, with white underparts and a white band on their necks, Cornell Lab reports. They have shaggy crests on their heads that sometimes stand up like mohawks, and their bills are long and sharp like a dagger.

Being around the same size as a robin, belted kingfishers weigh less than half a pound, and their wingspan ranges from about 19 inches to 23 inches.

Belted kingfishers live across almost the entire North American continent except for the farthest Arctic regions of Canada. They are migratory birds in some locales, but the belted kingfishers that live in Illinois and much of the United States live here year-round, Cornell Lab reports.

These birds live near water, most commonly rivers, streams, ponds and lakes. They nest in burrows, which they build into vertical banks of earth, usually away from trees, because tree roots can make it difficult to burrow into the dirt. They typically look for high spots on banks near water, to prevent their nests from flooding. In the winter, look for kingfishers in areas where the water does not freeze.

The main food source for belted kingfishers is fish, mainly small fish. They also eat crustaceans such as crayfish, mollusks, insects and even sometimes reptiles, amphibians, small mammals, young birds and even berries, according to Cornell Lab.

The birds hunt from above, sitting on perches such as branches, poles and wires over water. When they see a fish or other prey, they dive down and grab the prey in their bill. They return to their perch with their catch, then bang their prey's head against the perch before eating it.

Belted kingfishers are a top predator of many aquatic habitats, according to the University of Michigan Animal Diversity Web. They help keep in check small fish populations, preventing them from becoming too populous. Because kingfishers hunt while perched high above the water, clean, clear water is key, so they can see their prey before diving down to catch it. 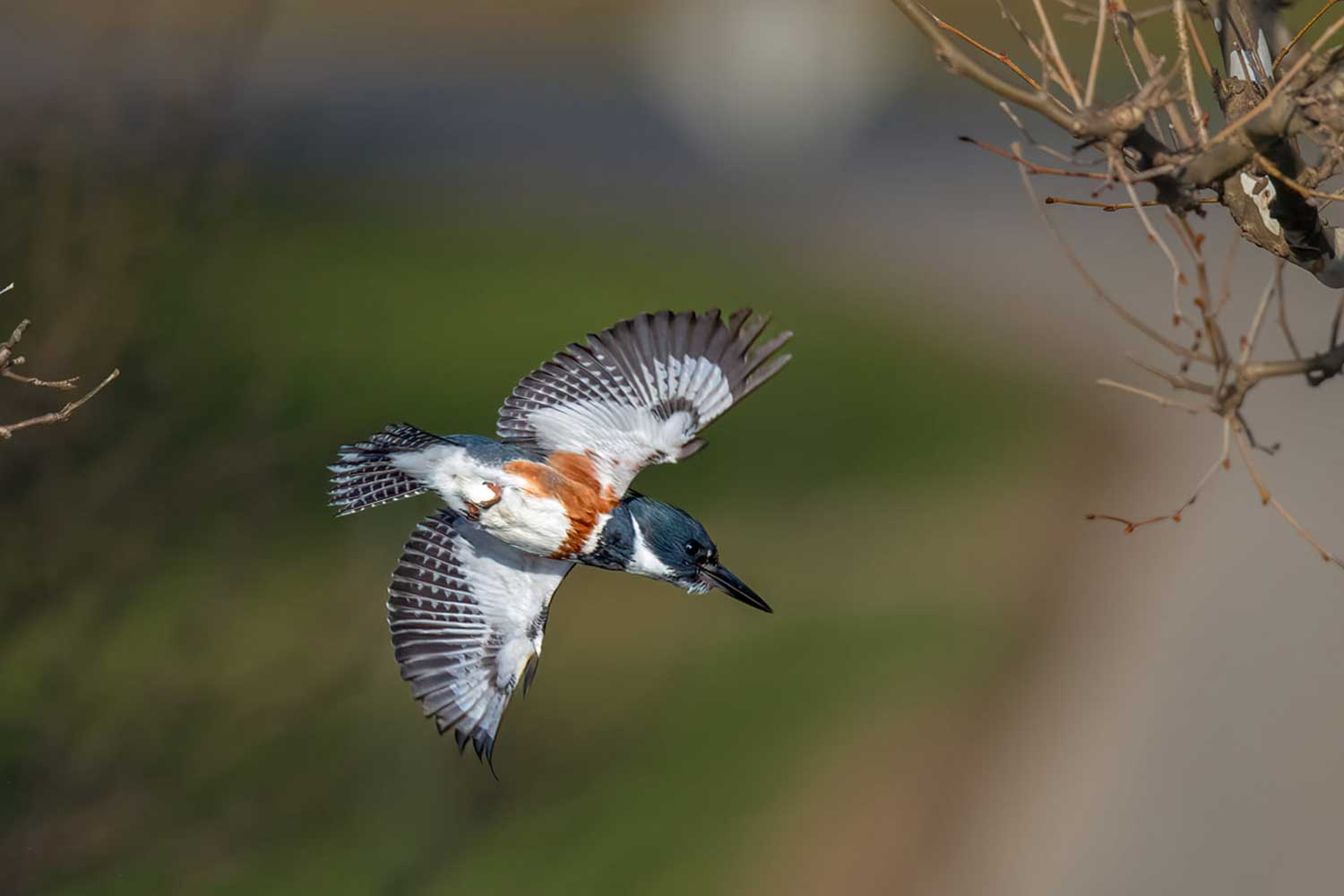 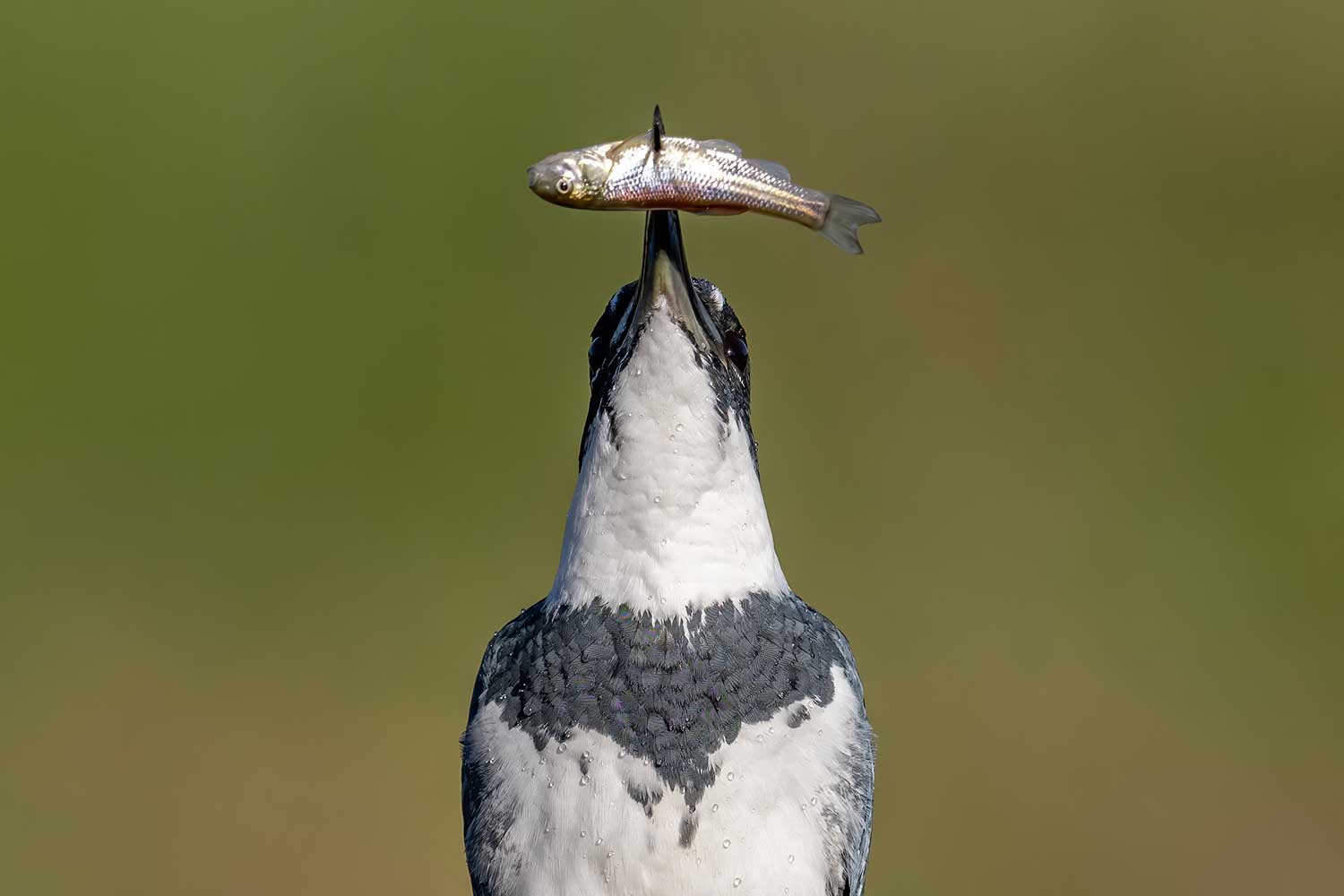 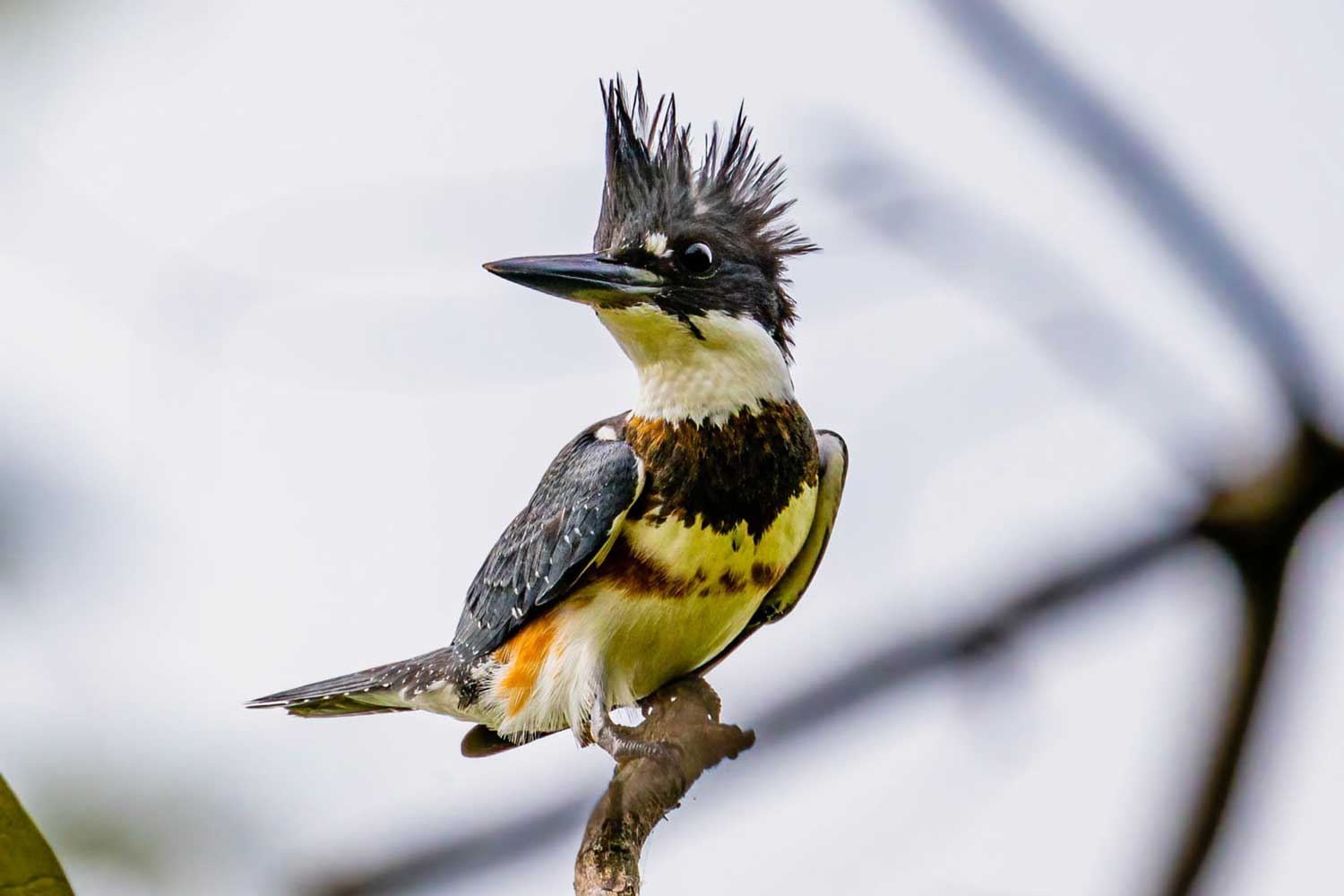 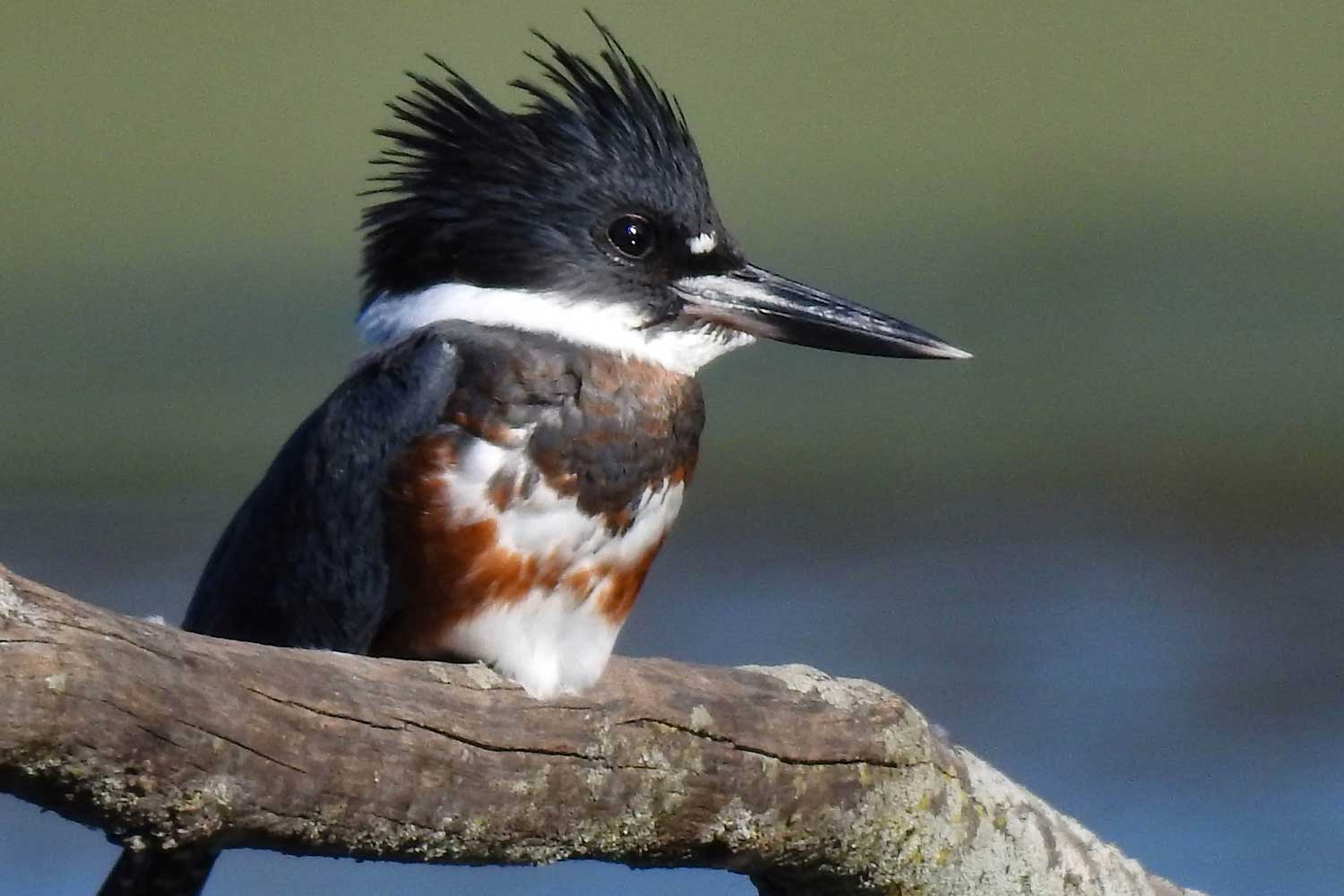 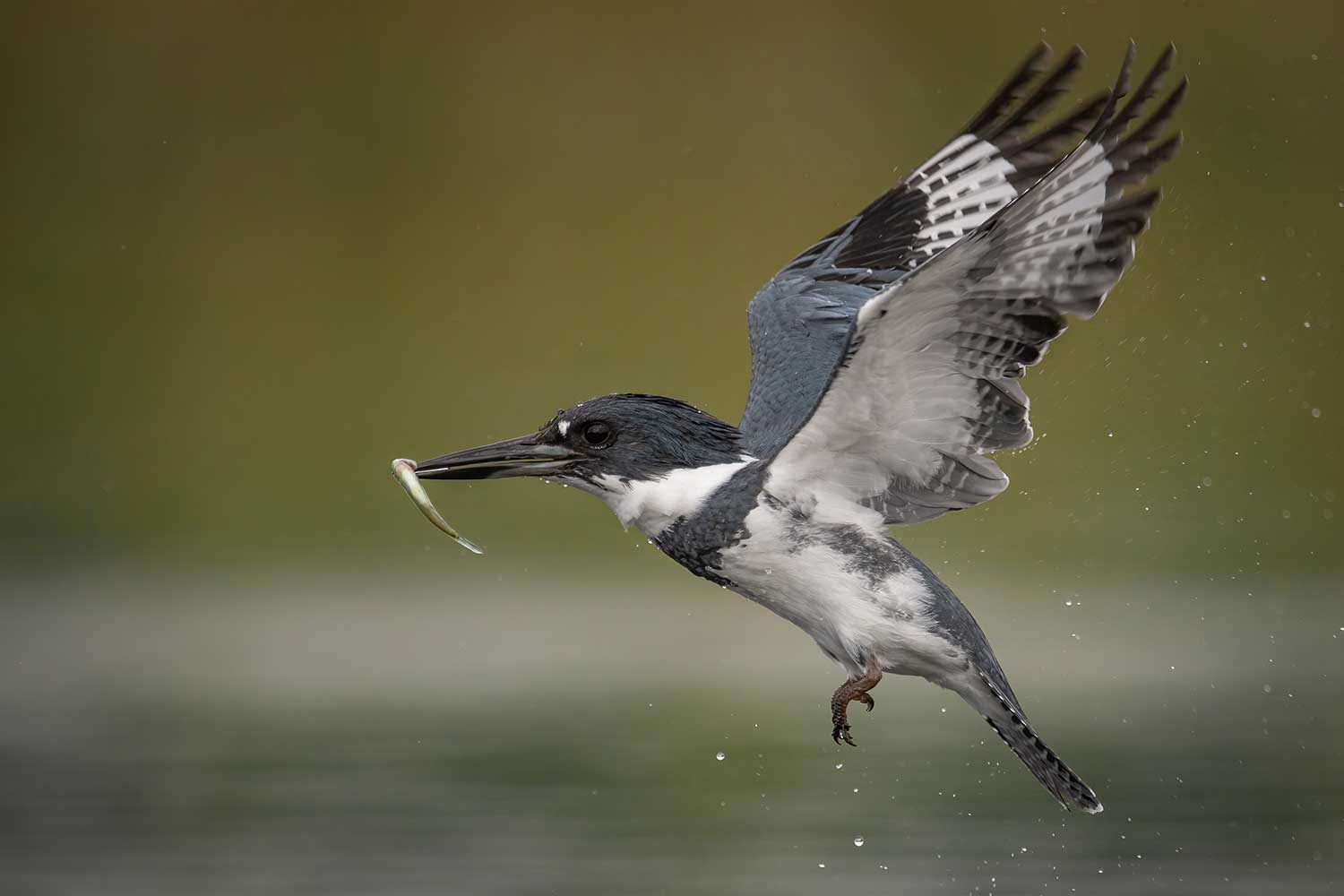 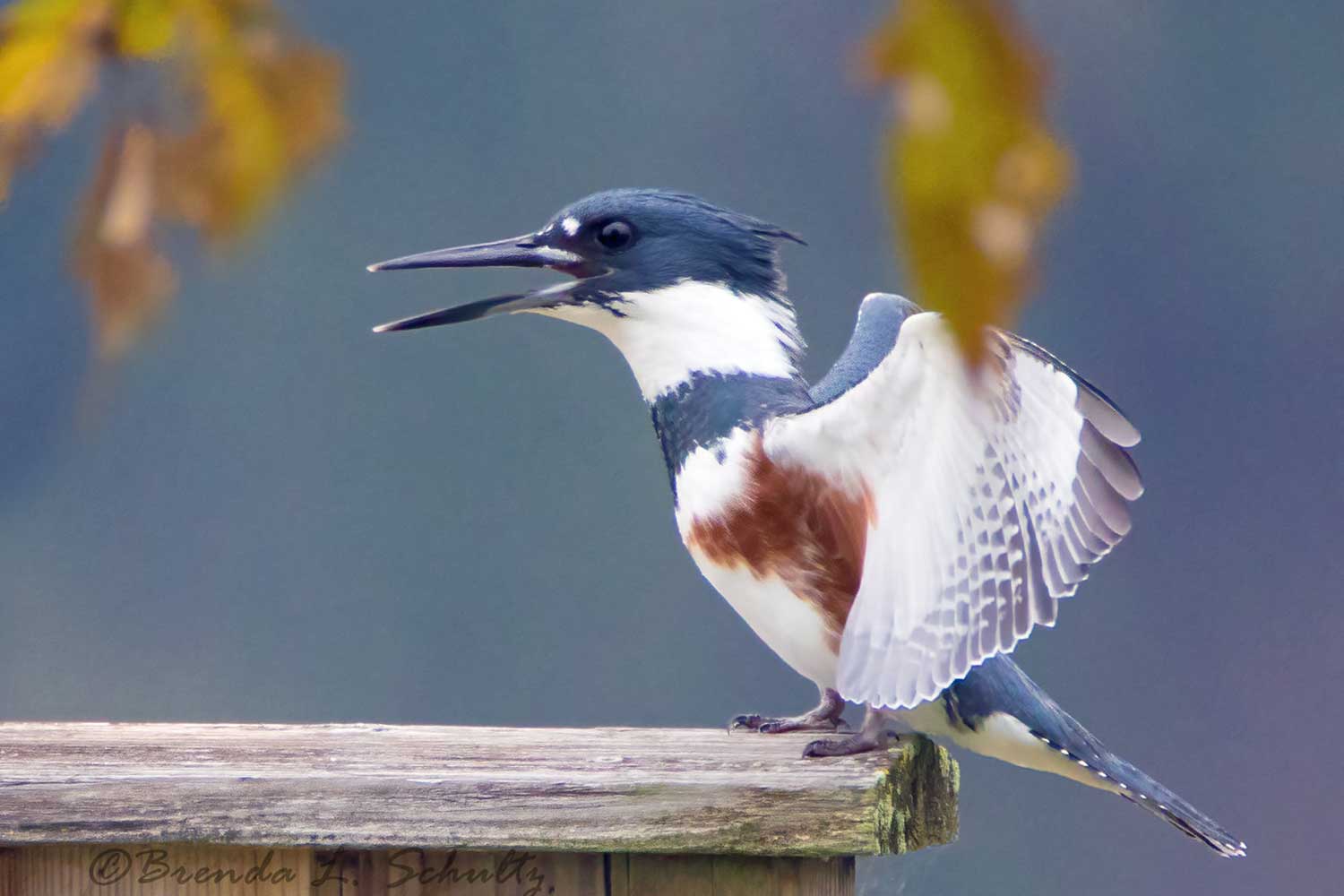