5 things to know about great horned owls, the quintessential owl 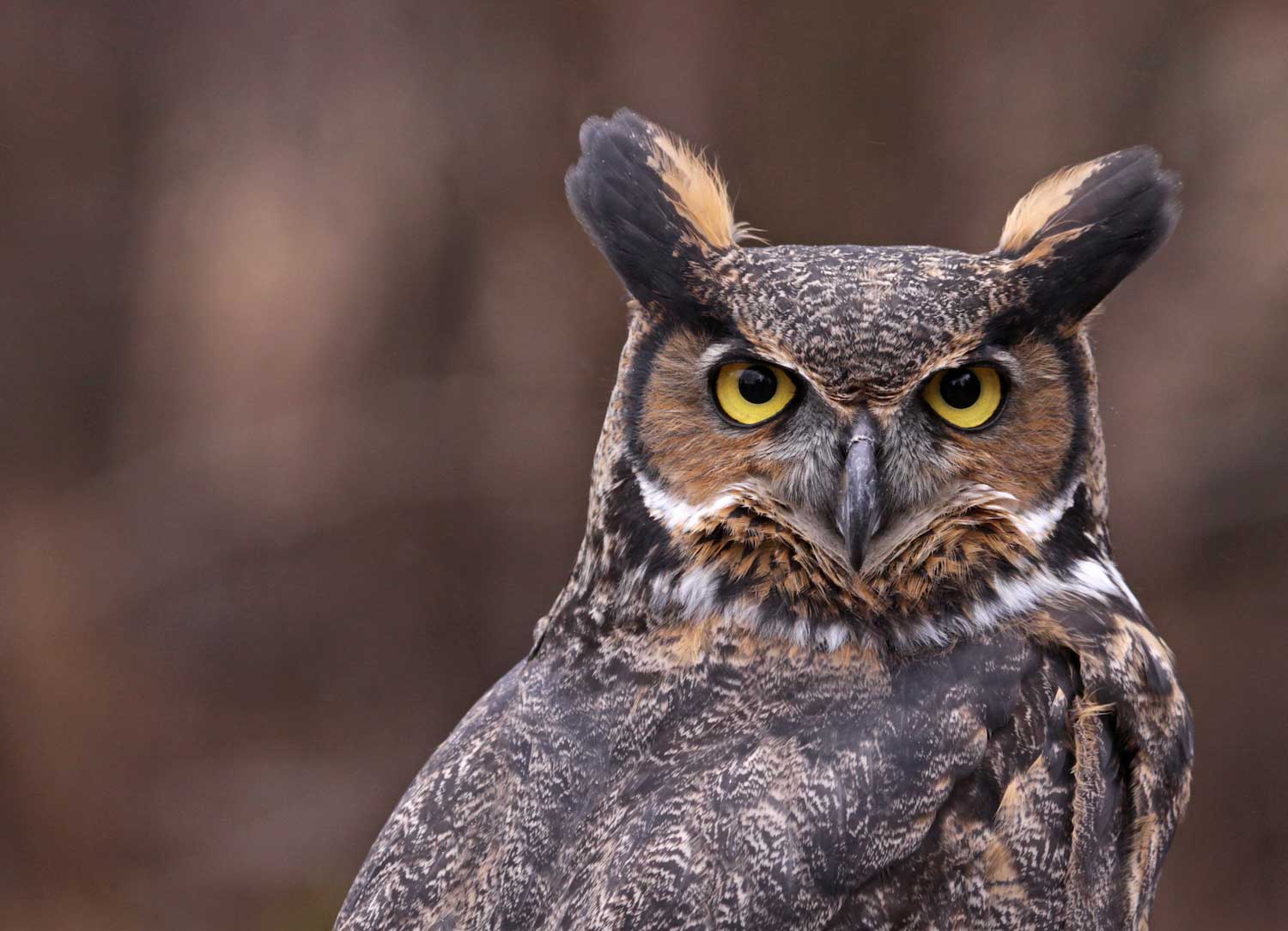 When you think of owls, it is probably the great horned owl that first comes to mind. It is the prototypical owl, the one most familiar to many people.

Great horned owls are the owls of storybooks and legends, and for good reason. They're among the most common owls in North America, and their range covers almost the entire continent, save for the northernmost reaches of Canada and Alaska and some southwestern portions of Mexico, according to the Cornell Lab of Ornithology.

The hoot of the great horned owl is the quintessential hoot. They call out hoo-h-hoo-hoo-hoo into the night, with males and females sometimes singing back and forth to one another, Cornell Lab reports.

Great horned owls are one of the eight owls that live in Will County. Their closest relative is the snowy owl, according to the Owl Research Institute.

Here are five other things that make great horned owls all the more impressive.

They don't really have horns

This might not be much of a surprise, but great horned owls aren't really horned. Those horn-like protrusions aren't ears either, although they are sometimes thought to be. The "horns," which are called plumicorns, are actually just tufts of feathers, according to National Geographic.

Plumicorns aren't unique to great horned owls, although theirs are among the most prominent. Feather tufts are fairly common in owls. Eastern screech owls have small ear tufts, and the long-eared owl and short-eared owl are both named for feather tufts that look like ears, according to the Owl Research Institute. Owls do have ears, but not where those tufts would have you believe. Owls' ears are hidden under feathers behind their eyes.

Their neck anatomy is unique, but also critical

While it's not exactly true that great horned owls — or any owls for that matter — can rotate their heads an entire 360 degrees, they can get pretty close. Owls can turn their necks 270 degrees in either direction, National Geographic reports, which means they can see behind them simply by turning their head. This skill is mighty impressive, although owls are not alone among birds with this ability. Red-tailed hawks can do it too. In fact, it's quite common among birds of prey to have excellent range of motion to help them see all around them.

Owls have this head-spinning ability thanks to their neck anatomy, which is quite complex. They have 14 bones in their necks, compared to just seven bones in the human neck, according to the Chattahoochee Nature Center. Owls also have only one socket pivot connecting their heads to their bodies, while humans have two, which restricts movement.

If humans turned their heads as far as an owl can, it would cause significant damage to the arteries carrying blood around the head and neck and lead to internal bleeding. Owls are able to avoid similar injuries because they have a network of backup arteries that continue to offer a fresh blood supply when other arteries are cut off by their turning heads, according to National Geographic.

They have excellent vision and hearing

The eyeballs of great horned owls and other owls are fixed in place, so they can't move them around in the sockets, Cornell Lab reports. This is one reason that the ability to turn their heads extensively from side to side is so useful. But their inability to move their eyes around isn't too much of a deficit, because they have excellent vision.

A great horned owl's eyeballs are about the same size as a human's, the Chattahoochee Nature Center reports. They only see in black and white, but their eyes are 35 times more sensitive than ours. They can see objects with only 5 percent of the light that a human needs to see them.

In addition to excellent vision, these owls have exceptional hearing as well. They can hear sounds from as far as 10 miles away, the nature center reports. Not all their senses are heightened, however. Great horned owls do not have a very good sense of smell, so they rely on their hearing and vision to aid them in hunting.

They aren't picky eaters — and they're built to hunt

Great horned owls are carnivorous, and they have the most diverse diet of all the raptors that live in North America, Cornell Lab reports. Their preferred food is small mammals, but they also eat birds, reptiles, amphibians, fish and insects. They are one of the few animals that will regularly eat skunks.

While they eat a lot of small rodents, they can and do prey on animals similar in size to them, including other raptors like the osprey, peregrine falcon and other owl species, Cornell Lab reports. They are even able to prey on animals that weigh more than them. They mostly hunt at night, perched above as they watch for their next meal. Once they have prey in their sights, they swoop down and catch it in their talons.

They aren't dainty eaters either. Some prey, like small rodents, they swallow whole, National Geographic reports. With larger prey, they will rip it into large chunks before swallowing it. Not everything they eat can be digested, so they regurgitate pellets of the indigestible pieces.

They are almost silent in flight

The extremely soft feathers that great horned owls have help insulate them against the cold, and these feathers also stifle the sounds their wings make in flight, Cornell Lab reports. Their feathers, though, aren't the only thing contributing to near-silent flight.

Normally, the bigger the bird, the louder they are in flight, according to the National Audubon Society. However, this isn't the case for many owls, including the great horned owl. Owls' wings are large compared to their body size, and this lets them fly more slowly and with little flapping. The structure of their feathers also helps deaden sound.

Most birds' feathers have comb-like edges, and the way air moves through the feathers creates a swooshing sound as they fly. However, owl feathers have velvety fringe on the trailing edge, and this both streamlines airflow in flight and absorbs the sound that is produced, the Audubon Society reports.