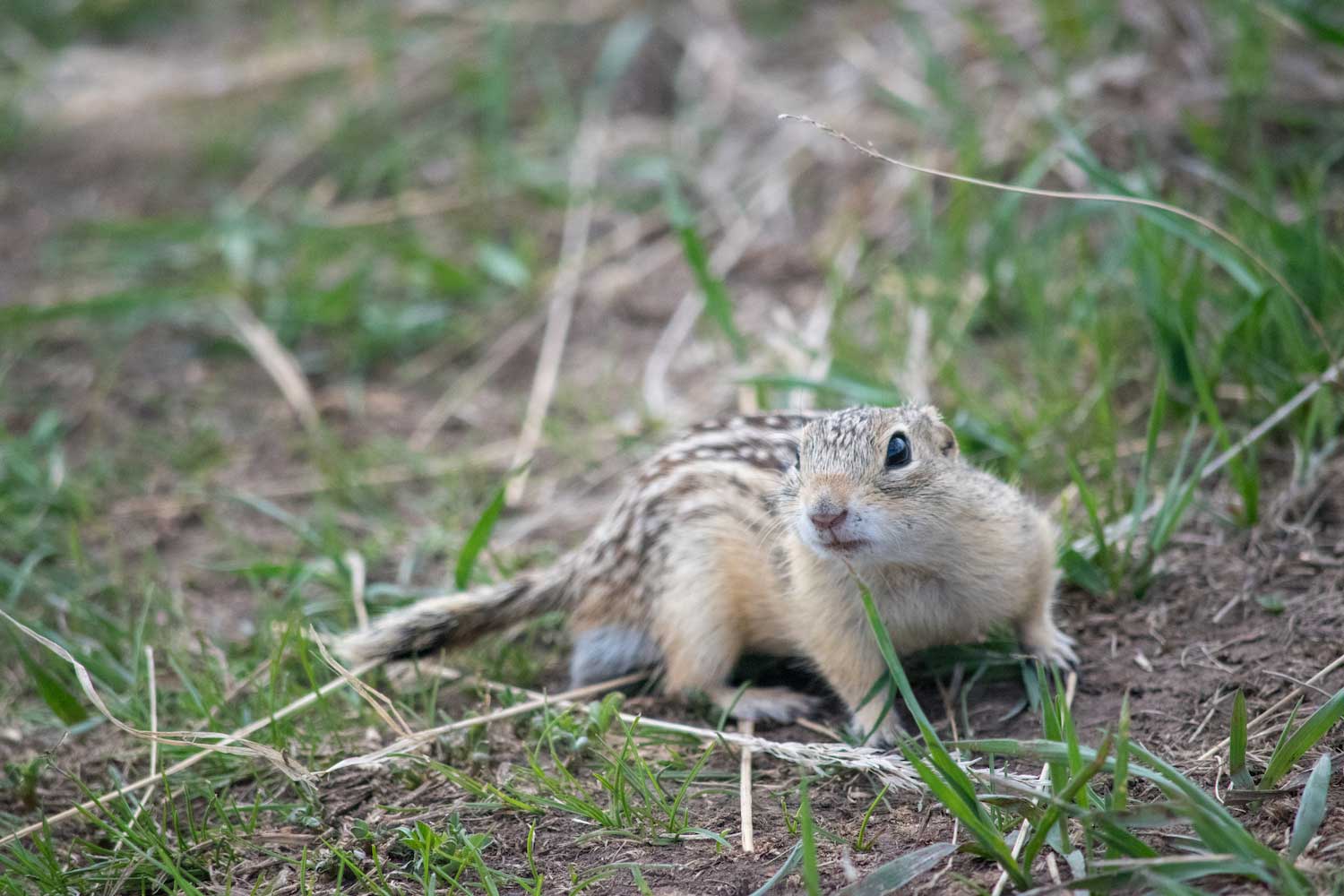 Tiny creatures scurrying across the ground are often all assumed to be chipmunks, but in many cases they are actually ground squirrels.

Thirteen-lined ground squirrels are one of two kinds of ground squirrels that live in Illinois. They are often confused with chipmunks. The easiest way to tell them apart is by their stripes. A ground squirrel has more stripes — 13, as you might expect — and their dark stripes have a dotted appearance. Chipmunks have just five stripes, alternating between light and dark brown, that are wider in appearance.

Unlike their tree squirrel counterparts, 13-lined ground squirrels are one of the few animals in our area that hibernate in the winter. In fact, they can spend as many as 250 days a year hibernating, according to Wildlife Illinois.

Thirteen-lined ground squirrels are diurnal, which means they are active during the day. They create burrows in the ground, so much of their time is spent below ground.

Here's more information about these creatures.

Thirteen-lined ground squirrels are named for their stripes. Although some of the squirrels have 13 stripes, the number can vary, according to the Illinois Department of Natural Resources.

The stripes alternate between dark brown and light brown and run the length of their backs, stopping at the neck. Some of the squirrels have seven dark stripes and six light stripes, while others have seven light stripes and six dark stripes, according to the University of Michigan's Animal Diversity Web. The dark brown stripes usually have tan spots, giving them a dotted appearance.

The most identifiable characteristic of the 13-lined ground squirrel is the stripes on their backs. They otherwise have light brown fur with dark brown tails that end in a lighter-colored tan tip, according to IDNR.

These squirrels weigh less than 1 pound and range between 4 1/2 inches and 6 1/2 inches long, and their tails are about half the length of their bodies. Their tails are slightly bushy, but not like that of a tree squirrel. They also have short ears.

These squirrels are native to North America. They are prairie animals, and historically their range has included the plains of central North America, according to Animal Diversity Web. However, as land has been cleared, they have extended their range further north and east. In Illinois, they live in the northern two-thirds of the state, IDNR reports.

Thirteen-lined ground squirrels typically live in areas with short grass and soils that are sandy or well-drained. They prefer short grass so they can see above it while standing on their hind legs. The sandy and well-drained soils are essential for building burrows. Because of their habitat preferences, these squirrels commonly live at golf courses, parks, roadsides, cemeteries, airports and in residential yards.

Thirteen-lined ground squirrels are omnivores, but they predominantly eat plants, particularly seeds. In fact, their scientific name is Spermophilus tridecemlineatus, and spermophilus translates to "seed lover," according to Animal Diversity Web. In addition to seeds, they eat grasses, clover, insects, bird eggs and even sometimes carrion and other small vertebrates.

Just like tree squirrels, 13-lined ground squirrels hoard food. They do this so they have food to eat when it is scarce, such as during winter. They transport food to underground burrows in pouches they have in their cheeks.

Thirteen-lined ground squirrels are important ecologically because they aerate the soil and help condition it for plant growth because of their burrowing behavior, according to Wildlife Illinois. In addition, they serve as a food source for animals including hawks and other raptors as well as weasels and badgers.