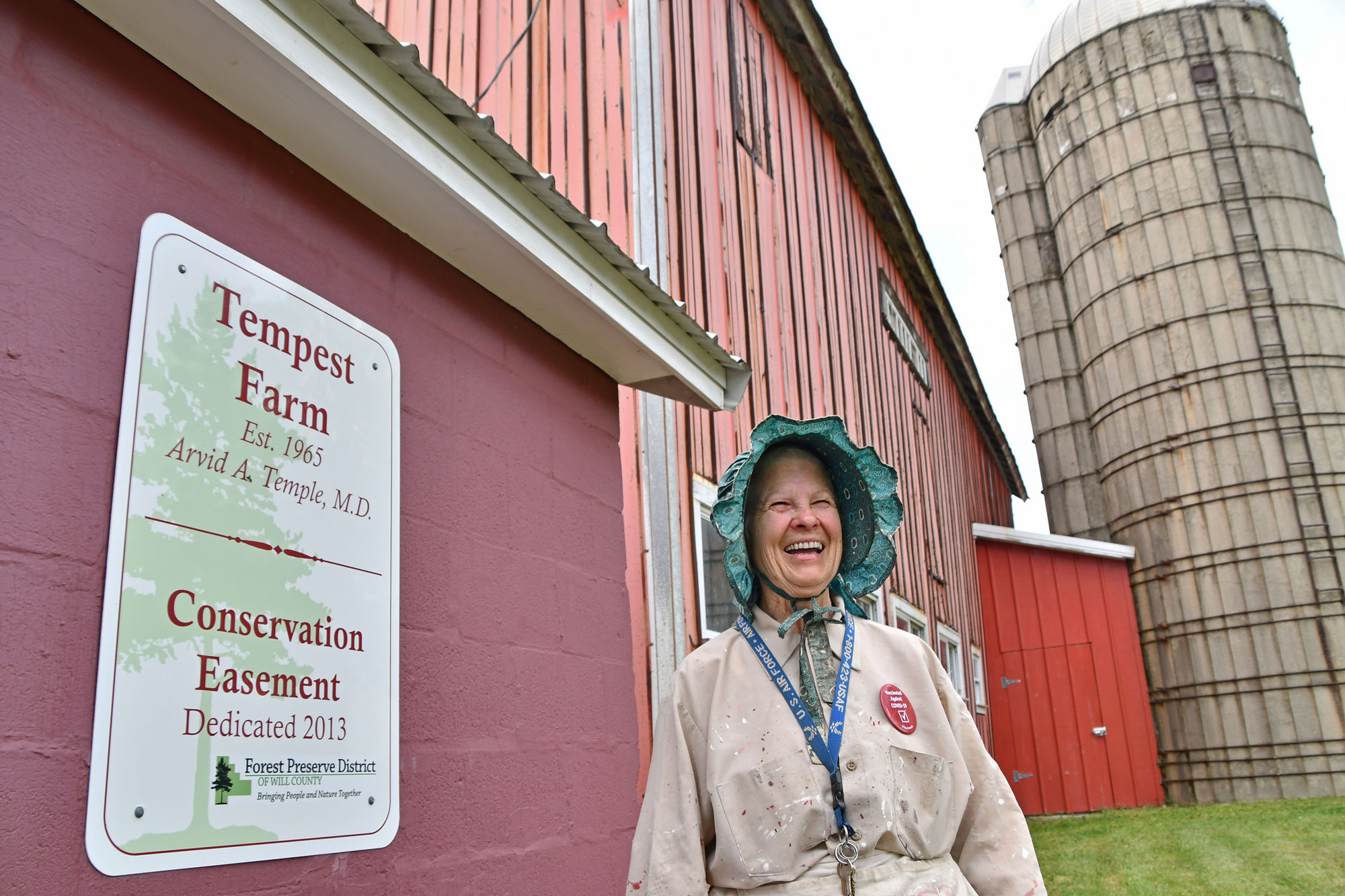 Lisbet “Beth” Temple, the woman behind the largest land gift to the Forest Preserve District by an individual, says the donation is a way to honor her late husband and she hopes her actions inspire others.

Temple is donating a 160-acre farm in Washington Township to the District. The first 40 acres were transferred late last year. The land, known as Tempest Farm, is located off South Yates Avenue, east of Beecher.

The farm had special significance to her husband, Dr. Arvid Temple, who worked for many decades as a general surgeon in Chicago. Because they were Jewish, his parents, Ester and Benjamin Teplitsky, could not own land in a section of Poland controlled by Russia in the early 1900s. As a result, they emigrated to the United States and bought a home in Chicago and instilled a love of land in their son.

“Because his parents couldn’t own land in Poland, Arvid wanted to own something here,” Beth said. “And he was very much into the preservation of farmland and the concept of land being open and of us being stewards and taking care of it.”

Arvid, an avid horseman and animal lover, bought the Washington Township farm in 1965 four years before he married Beth. Though they never lived at the farm full time, he and Beth spent many wonderful years there tending to their gardens and animals, working in the wood shop and enjoying the nature surrounding them. Beth even recalls stints where she milked cows and shoveled manure.

The donation to the Forest Preserve is a way to preserve her husband’s legacy, Beth said.

“He was one of those rare human beings who had nothing but good will for everyone regardless of race, creed or color,” she said. “He came from a large immigrant family, worked hard not just for himself but for others, and was truly a righteous person.”

Beth, who is retired from careers in academia and computers, sat down for an interview recently in her brown brick Flossmoor home to talk about her life, her husband and her donation.

While sitting on a couch in her living room, she could see her backyard and the intricate bird feeders her husband created for her years ago. Anytime she would ask for a new addition, he would create another feeder to add on to her “candelabra” shaped feeding system, which has one bird feeder shaped like the Parthenon.

“He was an extremely creative person, and he was very, very talented with his hands,” she said.

He also faced discrimination in his life for being Jewish. He couldn’t enroll in the medical school of his choice because they had a 10 percent quota, Beth recalled. He enrolled at Chicago Medical School instead in the 1940s and went into practice in the Hegewisch neighborhood in Chicago. He gave up his practice – along with his horse and other possessions – when he was drafted into the Army for the Korean war around 1950.

“He served our country as a captain in the medical service and he trained medics to prepare them for what would happen,” she said. “He didn’t talk much about that.”

When he came back to the Chicago area Arvid continued his love of horseback riding in the dressage style with a flat saddle and a double rein. “My husband was very good at it,” Beth said. “He was very strong.”

Arvid, who died in 2007, also spoke many languages and was very intelligent, she added.

From good to better

In addition to honoring her husband, Beth said she hopes her gift to the Forest Preserve will educate others about the benefits of land donation and inspire them to consider giving similar donations.

There are good business reasons for putting land into a conservation easement, which Beth did in 2013. The tax breaks will help her now that she is retired and she has been able to take a portion of the conservation easement’s value off her income taxes over several years. And as the land is being turned over to the District in phases, she will save on property taxes and insurance costs and upkeep for the parcels.

When asked what she hopes will become of the 160 acres that has both Trim Creek and Pike Creek running through it, she visualized the future.

“I think it should look like what the prairie looked like before they invented the self-scouring steel plow,” she said. “We need to heal the land and bring back the prairie.”

And that will take time, she added. But at the age of 77, Temple said she believes in having patience and using time to one’s advantage.

“Time is the best tool there is when it comes to investing or gardening. Some people plant big trees, but I plant a little twig of a tree and I wait. Time will change it. Time will convert it from what is today, which is good, to something better.”

Citizen of the world

“Beth’s gift allows us to create a new standalone preserve on the east side of Beecher in the Trim Creek watershed, our first in this area” Schultz said. “The land will be restored to wetlands and prairie and could form the base of a larger preserve if we continue to acquire adjacent properties.”

Now that the Forest Preserve has accepted the first 40-acre donation, Beth said she can relax a bit.

“It’s a feeling of comfort,” she said.

The site is teeming with salamanders, green frogs, tree frogs, barn swallows and tree swallows and one of her greatest joys is sitting quietly at Tempest Farm soaking up nature.

“It’s a place I can go where there is utter peace,” she said. “If I want to sit down on the ground and watch the clouds, it’s OK.”

Beth will continue to tend her 10 garden plots at Tempest Farm, which was named after her husband’s favorite horses and dog. All the vegetables grown there – including collard greens, turnips, kale, peas, spinach, onions, potatoes and heirloom tomatoes – will be donated to the Respond Now Food Pantry in Chicago Heights, as they have been for many years.

She will continue to make toys for children out of scrap wood using the many different types of saws her husband taught her how to handle at the farm. The wooden toys range from decorated wood blocks to animal trains and dinosaurs.

And she will keep attending programs at one of her favorite Forest Preserve spots, Plum Creek Nature Center in Crete Township.

“I love going to the talks and the walks and the painting classes and watching the children play. It’s a joy.”

Beth said she wants to make things better by helping others and by giving back through her donations.

“It’s about being a citizen of the world,” she said. “It’s my obligation as a human being to not damage this world.”