For Barb Ferry, raising monarchs is more than a hobby 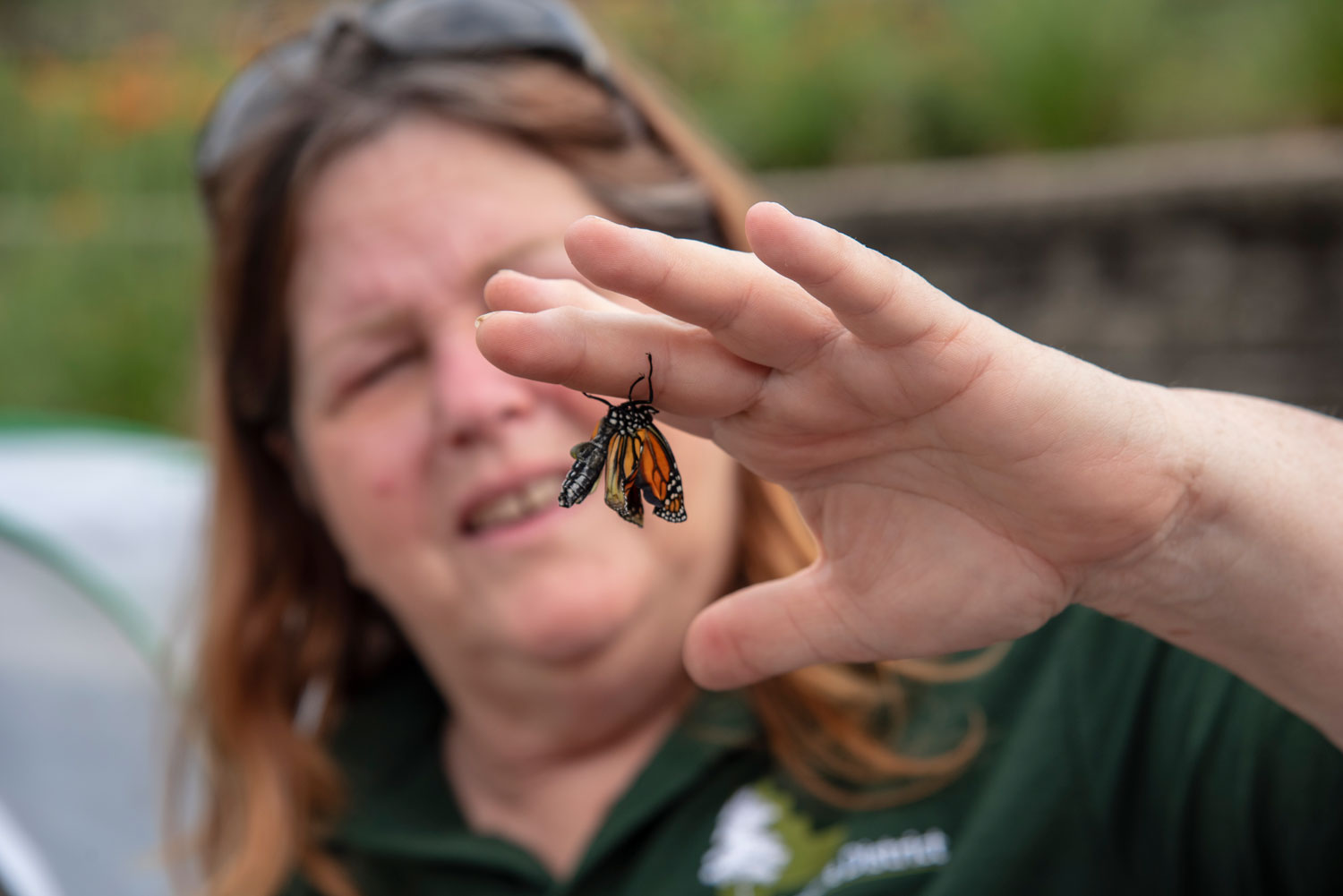 Barb Ferry observes a monarch butterfly that recently eclosed, or emerged, from its chrysalis. (Photo by Chris Cheng)

Barb Ferry talks to butterflies, but not in a way that would make a stranger quickly walk in another direction. Ferry has been raising monarch butterflies at her home for about seven years, and her conversations with them speak to her passion about the species and their importance in the world.

Her interest in butterflies and nature in general dates back to her childhood, and today it's a full-fledged hobby. She even has had her yard certified as a Monarch Watch Monarch Waystation and is on her way to having it certified as a wildlife habitat.

Her yard is full of wildlife — opossums, raccoons, "a host of wonderful birds" and, of course, butterflies. Her interest in raising monarchs at home stemmed from the realization that as an adult she wasn't seeing as many animals outside as she did as a child.

"Growing up, I remember seeing a ton of caterpillars and insects and really interesting little creatures, and as I got older I didn't see them anymore," said Ferry, a longtime Forest Preserve District volunteer.

Through the years, Ferry has released hundreds of butterflies. Last year alone, 150 monarchs made their way into the wild after eclosing, or emerging, at Ferry's home. She considers raising butterflies a way to educate the public about the importance of monarchs as pollinators and about pollinators in general.

"The reason I want to educate people is because these guys help produce one-third of the world's food," she said. "People say, 'I don't like bugs,' and I say, 'Well, do you like to eat?' No matter how gross and yucky they look, they are very important to your life."

This is the message Ferry has for people when she takes her butterfly habitats on the road, setting them up at various events hosted by the Forest Preserve District and elsewhere in the community. The monarchs are a big draw, especially for kids.

For Ferry, the ultimate goal in raising the monarchs and releasing them is contributing to the health of the butterfly's population. The monarch population has been plummeting in part because of a decline in the abundance of milkweed, which is the only plant monarch caterpillars feed on.

While the decline in milkweed is a large-scale problem, anyone can contribute to creating a habitat for monarchs by planting milkweed at home. And you don't have to limit yourself to milkweed. Bees, butterflies, birds, bats, beetles and other small insects and animals all pollinate plants, so planting your yard or garden with that in mind helps create a healthy habitat for wildlife, Ferry said.

"If there's nothing eating your yard, you're not planting the right stuff," she said. "Ninety-nine percent of people plant for pretty, not for sustainability."

Not all of Ferry's monarchs are a success story. Like all species, monarchs can get certain diseases. For example, Ophryocystis elektroscirrha, or OE, is a parasite that can infect the butterflies. Infected adults have spores of the parasites on their bodies, which they then leave behind on eggs and milkweed leaves, which in turn infects the pupae and larvae, according to Monarch Joint Venture. Monarch butterflies with severe OE infections may not fully emerge from their pupa because they get stuck or they are too weak to extend their wings. Less severe infections can lead to a shorter lifespan and the butterflies may not be able to fly as well.

To help prevent the spread of OE, Ferry tests her butterflies for the parasite before releasing them. To test them, she simply places a piece of tape on the abdomen and thorax of the monarch and then places the tape under a microscope to look for spores.

While the vast majority of her butterflies are free of disease, she has had a few with OE infections. In these cases, she euthanizes them by placing them in a plastic bag that she puts in the freezer. Humanely euthanizing these infected butterflies helps to keep the disease from further spreading among the monarch population as a whole, increasing the chances for a healthier species.

"I know it's kind of like playing God with nature, but if we can have a healthier population and increase their survival, we are going to help if we can," she said.

For the most part, her monarchs eclose in good health and are soon released to make their way in the world. The entire life cycle takes about 30 days, starting with an egg laid on a milkweed leaf, Ferry said. The eggs hatch after a few days, then the larva, or caterpillar, feasts on milkweed for about 10 to 14 days before it starts the process of metamorphosis, transforming itself into a chrysalis. About 10 to 14 days later, the monarch will eclose from the chrysalis, completing the life cycle.

In the larva stage, the caterpillars grow immensely, to 200 times their size when hatched, Ferry said, equating it to a newborn baby growing to be 20 stories tall in their first two weeks of life. That's why milkweed plants are so important, because it's the only thing they eat. The understanding of the importance of the plants and their role in sustaining wildlife gets to the heart of what Ferry is trying to achieve.

"Even if I can get two or three people excited about planting for pollinators, I've done my job," Ferry said. "We have to excite the younger generation because if we don't get them involved their kids aren't going to see half of what we can see."