Your guide to spring snake spotting

As temperatures increase, so can sightings of these reptiles out in the preserves

Spring is the season of renewal, when the world around us slowly seems to come to life after a long, cold winter. And among the species just starting to again make their presence known throughout Will County are snakes.

Now, as the temperatures warm for spring, is when snakes become active again after spending the winter underground.

Illinois is home to 39 species of snake, according to the Illinois Department of Natural Resources. Seventeen have been documented in Will County, although not all of those are regularly seen in the area, Buckner said.

Take the eastern massasauga, for example. 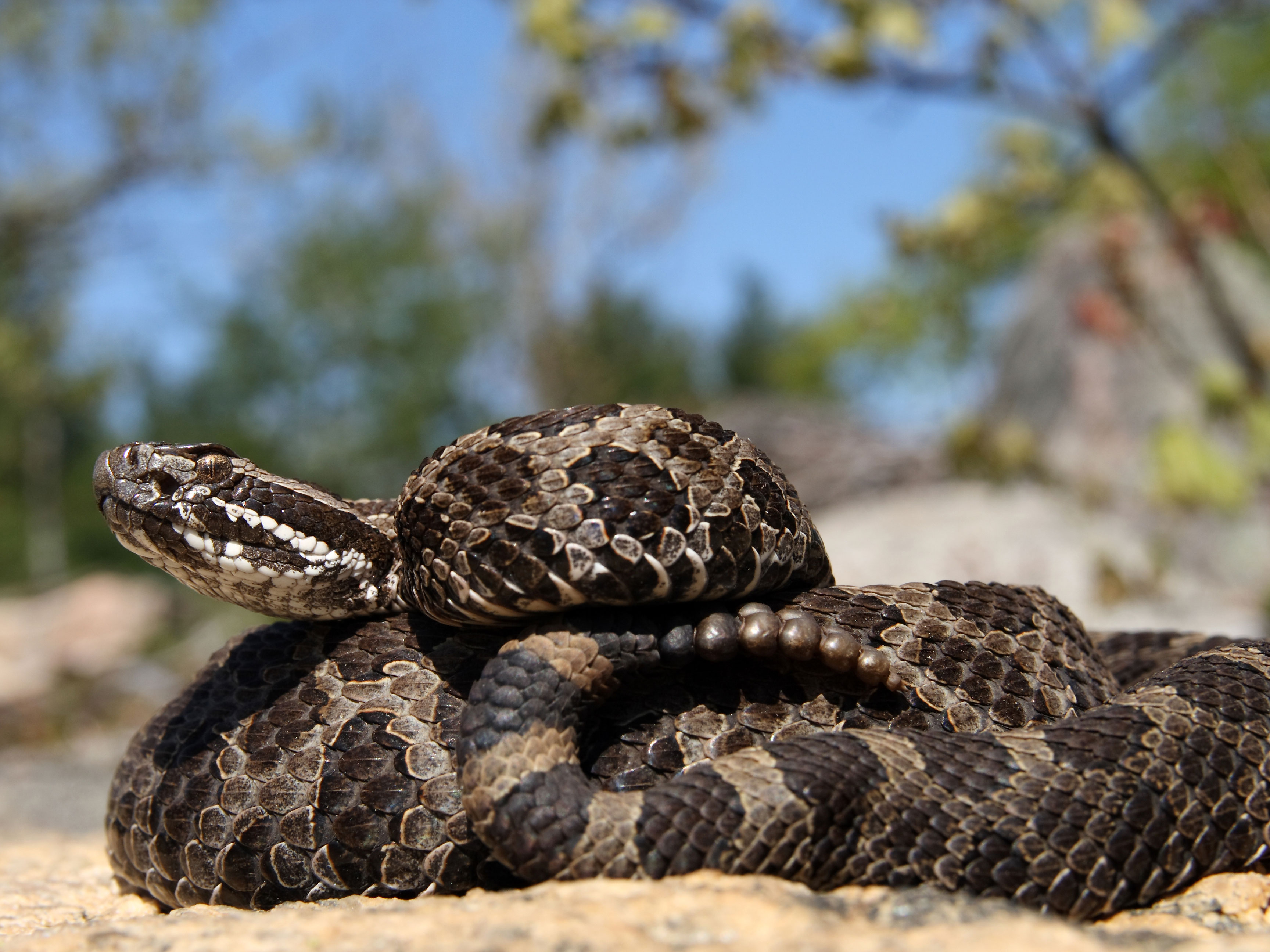 It was last documented in Will County in the 1980s at Goodenow Grove Nature Preserve and has likely extirpated from the area, Buckner said. However, the massasauga, which is on the state’s endangered species list, will be the subject of a statewide survey this year to determine where it is present in the state.

On the other hand, some of the commonly seen snakes include the foxsnake, northern water snake, brown snake, eastern hognose snake and two kinds of garter snakes – the common garter snake and plains garter snake.

Will County is also home to the bullsnake, the largest snake in North America, which can be up to 9 feet long, Buckner said. 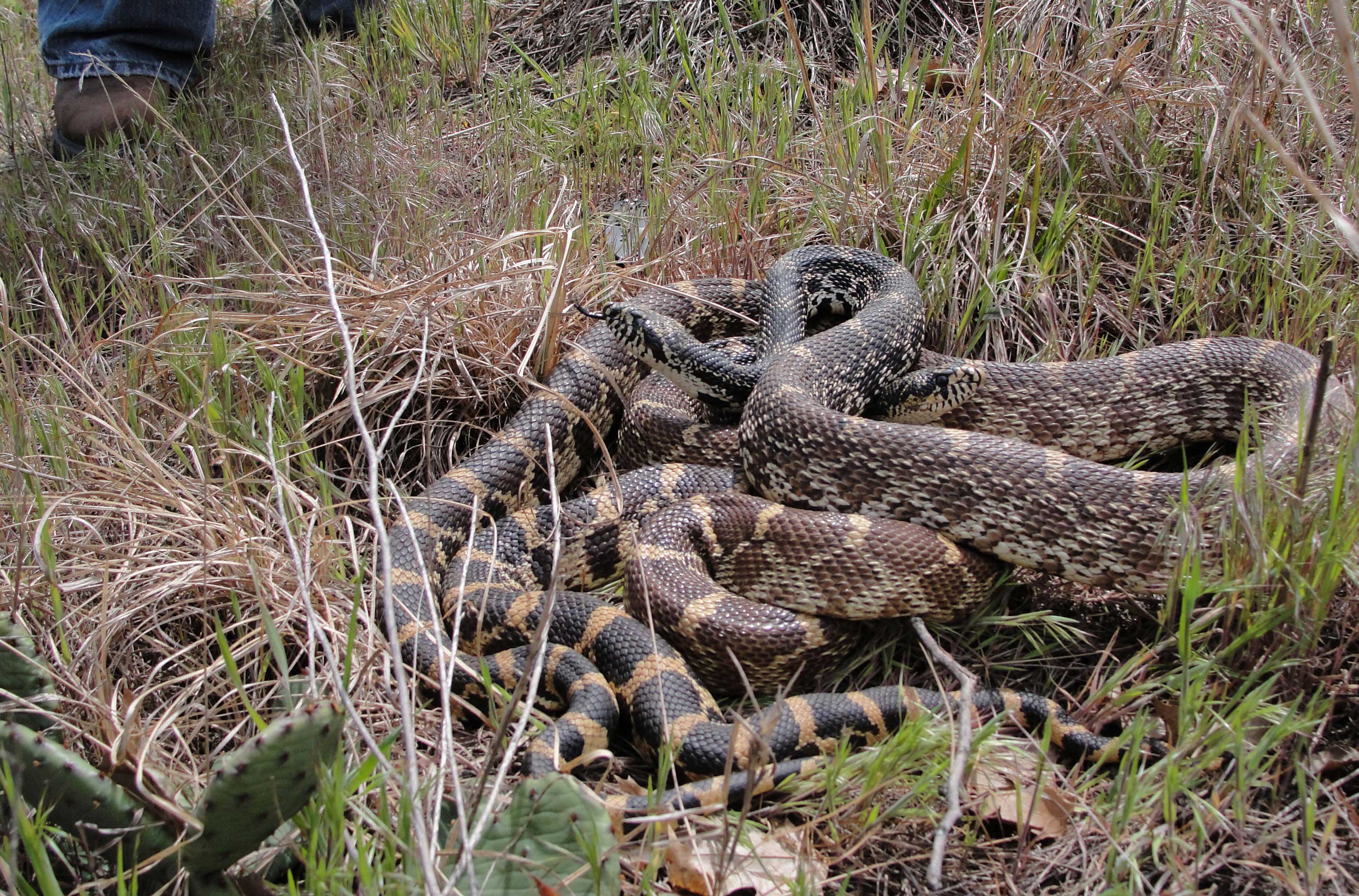 Snakes spend the winter underground in torpor – a period of physiological inactivity in which their metabolic rate drops significantly. Different species of snakes make their way above ground following their period of torpor at different times, Buckner said. In our area, garter snakes and hognose snakes are among the earliest, he explained, adding that he saw a garter snake out in the preserves in January this year.

For some snake species, the increasing amount of daylight drives their move above ground, while others rely on temperature to dictate when they first emerge in the spring, Buckner said.

We often see snakes in the spring because they like to bask in the sun on warm, sunny days, he said. This helps them warm up after a long, cold winter. 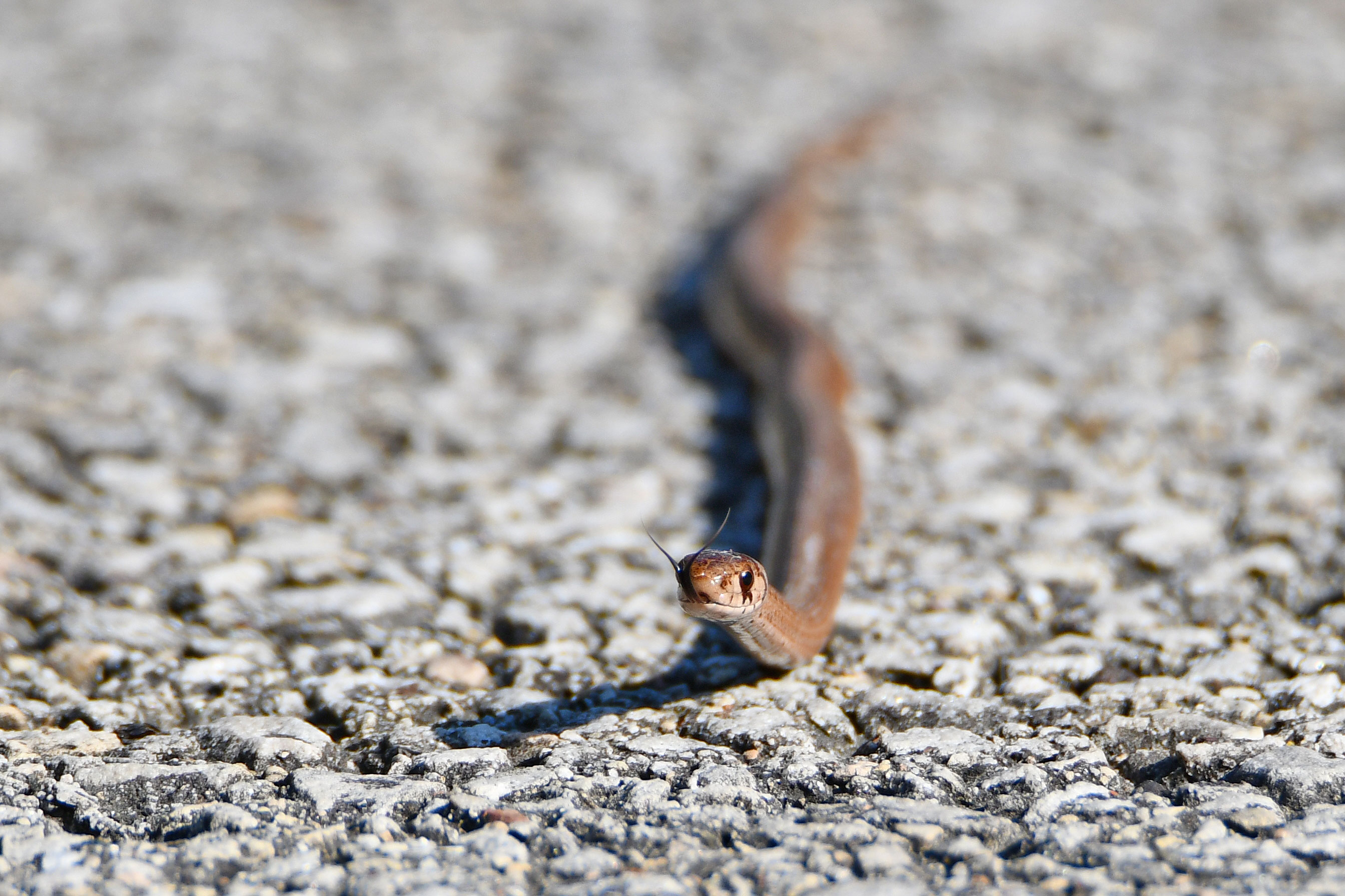 In the spring, finding snakes isn’t too much of a challenge if you know where to look. Because they are trying to warm their bodies up, looking in spots where they can bask in the sun is a good way to find them, Buckner said.

Different preserves offer different opportunities for snakes to bask in the warm sun. At Lake Renwick Heron Rookery Nature Preserve, for example, there’s a small pond area along the path to the nesting platforms where snakes can often be seen basking along the tree branches and limbs at the water’s edge, Buckner said.

Preserves with paved trails are often used for basking as well, he said, because the asphalt pavement warms up in the sun. Centennial Trail and Hickory Creek Bikeway, for example, are good places for spotting snakes this time of year. They aren’t often seen on the crushed limestone trails in the preserves because the limestone surfaces don’t heat up like pavement does.

At Sugar Creek Preserve, home to the District’s administration center and an access point for the Wauponsee Glacial Trail, snakes are a common sight during spring along the paths near the start of the trail because it’s nice and sunny, Buckner said. Further along, the trail is more shady, providing few good opportunities for basking. In general, head for sunny spots if you’re trying to view snakes in their natural environment during the spring season. 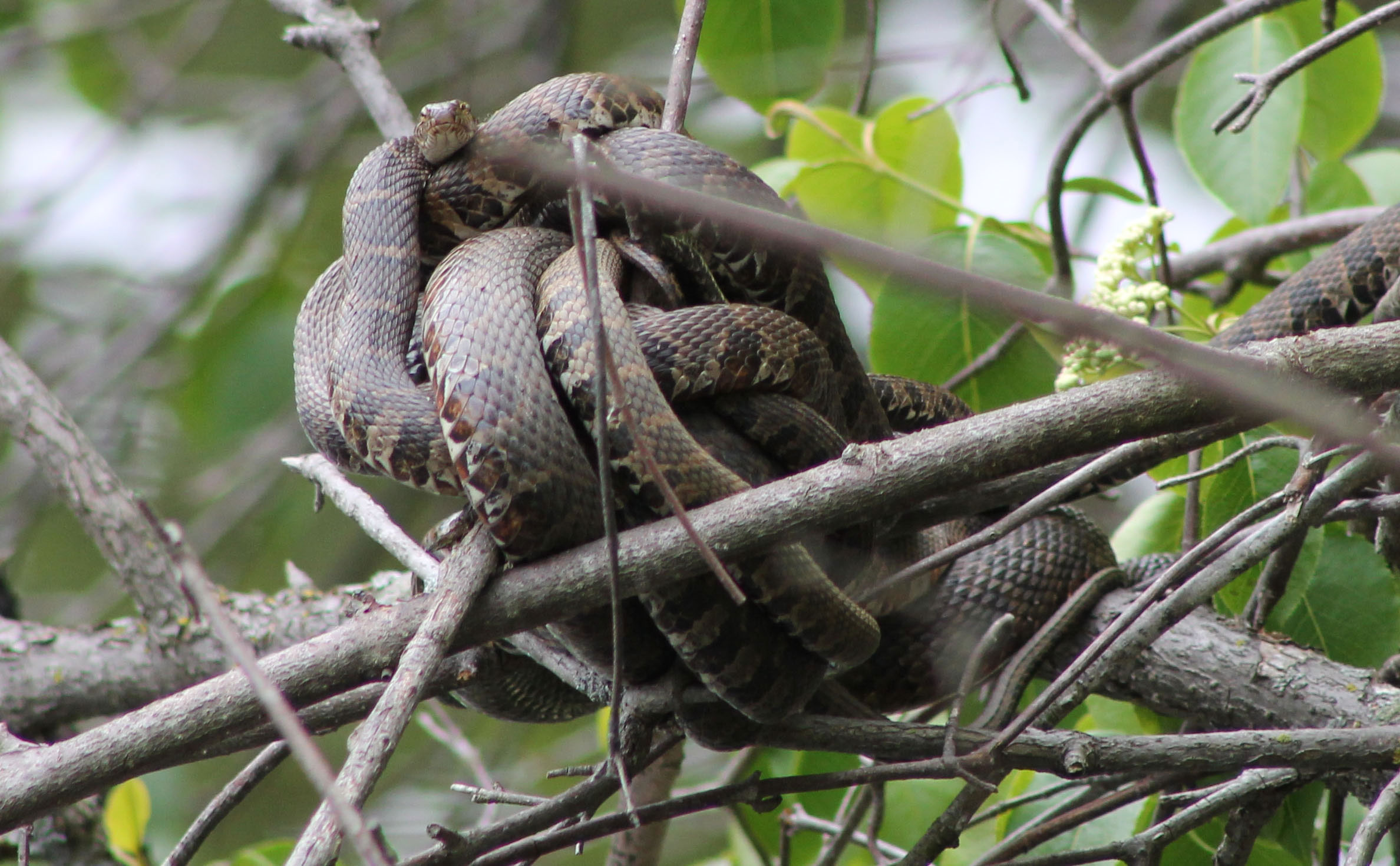 Snakes in a Mating Ball (Photo by Chad Merda)

It’s still a little early for mating season for the snakes that live in our area, but reproduction will begin a little later in the spring, Buckner explained. Different snake species mate at different times. Here in Will County, garter snakes are among the earliest to mate, and they are also among the species that create “mating balls” – when male snakes swarm the females and create an intertwined mass of snakes.

After mating season in the spring, the young snakes are born or hatched in late summer or early fall, IDNR reports. Snakes are classified as oviparous, ovoviviparous or viviparous depending on how the young are born. 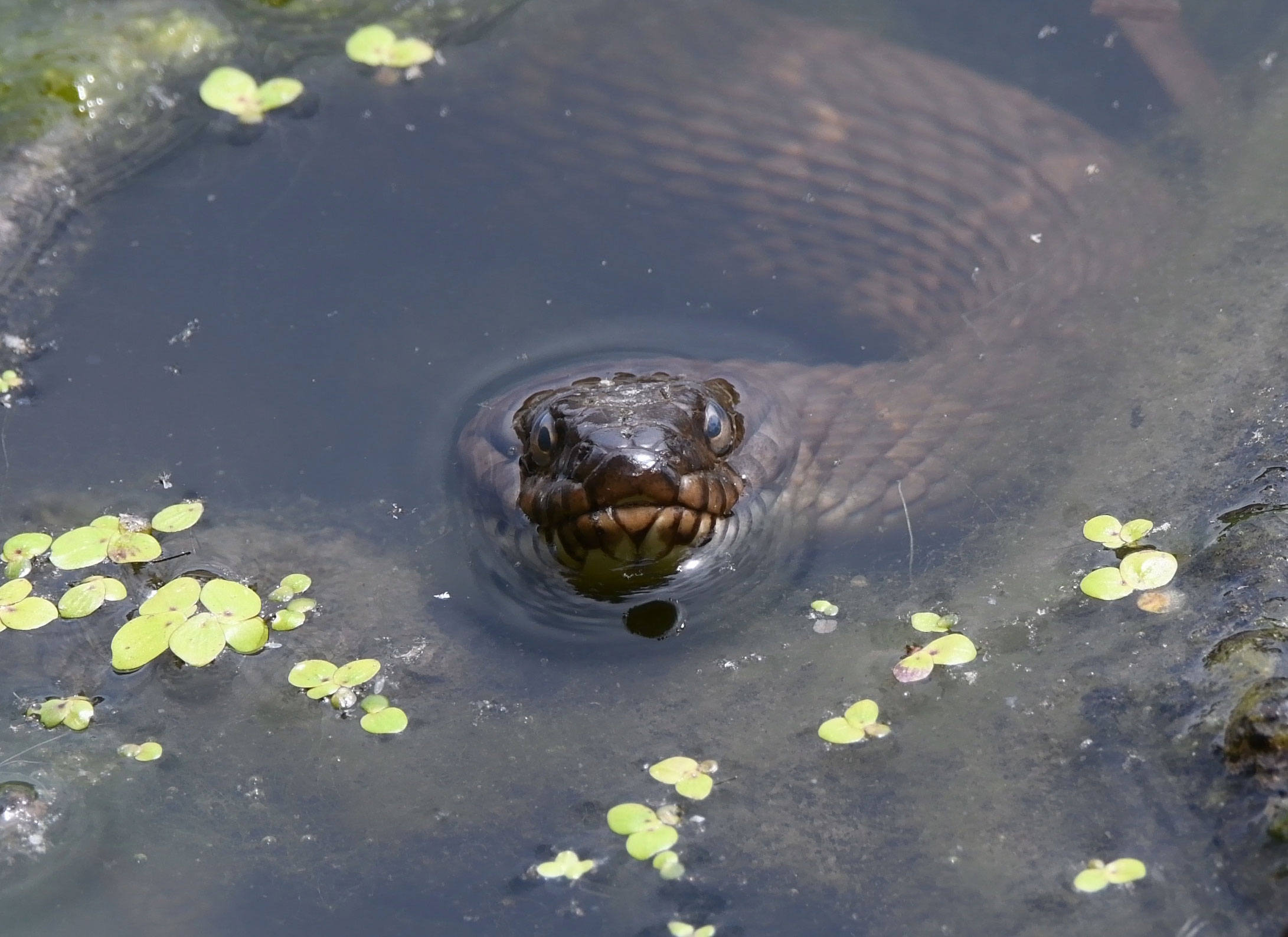 In Will County, no precautions need to be taken to stay safe from snakes because no venomous snakes live in our area, Buckner said. Only four snakes found in Illinois are venomous – the copperhead, cottonmouth, massasauga and timber rattlesnake, IDNR reports. None of these live in Will County or even in northern Illinois.

People often think snakes they see in the water are dangerous water moccasins, Buckner said, but it’s simply not true. While cottonmouth snakes, a type of water moccasin, do live in Illinois, they inhabit only the swamp and wetlands of the southern portion of the state, according to IDNR. What people are most likely confusing for a water moccasin is a northern water snake, which is not a threat to humans.

Most snakes we see in the preserves are not aggressive and will avoid humans, Buckner said. A few, including the fox snake and the northern water snake, can become aggressive if provoked, even unintentionally, but still pose no risk to humans.

“Neither one can hurt you,” he said.

The Benefit of Snakes

Because snakes are one of the most feared animals on the planet, it can be easy to forget that they, like all living creatures, play an important role in keeping the ecosystem healthy and balanced. Primarily, snakes serve as a natural form of pest control. They keep the population of rodents like mice and rats – two other animals we love to hate – in check, PBS reports. Removing snakes from an area can result in an explosion in the rodent population.

And in the animal kingdom, nearly every living creature is both a predator and prey. In areas that can sustain a large population of snakes because of a steady food supply, the snakes often become the prey of birds and mammals living in the area, Save the Snakes reports. And while Will County is not home to any venomous snakes, snakes in some parts of the world that are not a threat to humans feast on venomous snakes as a regular part of their diet, according to PBS.