More than 20,000 species exist worldwide, and those bees are crucial to the world's food supply

Many people view bees as a nuisance, something to be kept at bay and avoided at all costs while outdoors. Understanding the role bees play in our food supply, however, can change our irritation with these insects into something more positive.

Bees are the world’s primary pollinators, transferring pollen and nectar from male plants to female plants so they can produce flowers and seeds to reproduce.

More than 20,000 bee species exist worldwide. Of those, about 300 species are native to northern Illinois, said Laura Rericha, wildlife biologist with the Forest Preserve District of Cook County. Among the bees commonly seen in Illinois are bumblebees, sweat bees, carpenter bees, cuckoo bees, mason bees, leaf cutter bees, mining bees and plasterer bees, the Illinois Department of Natural Resources reports. Honeybees, the only bees that produce honey, can also be found throughout Illinois and are an important pollinator, although many other bee species found in Illinois are useful pollinators as well.

The Importance of Bees for Our Food Supply 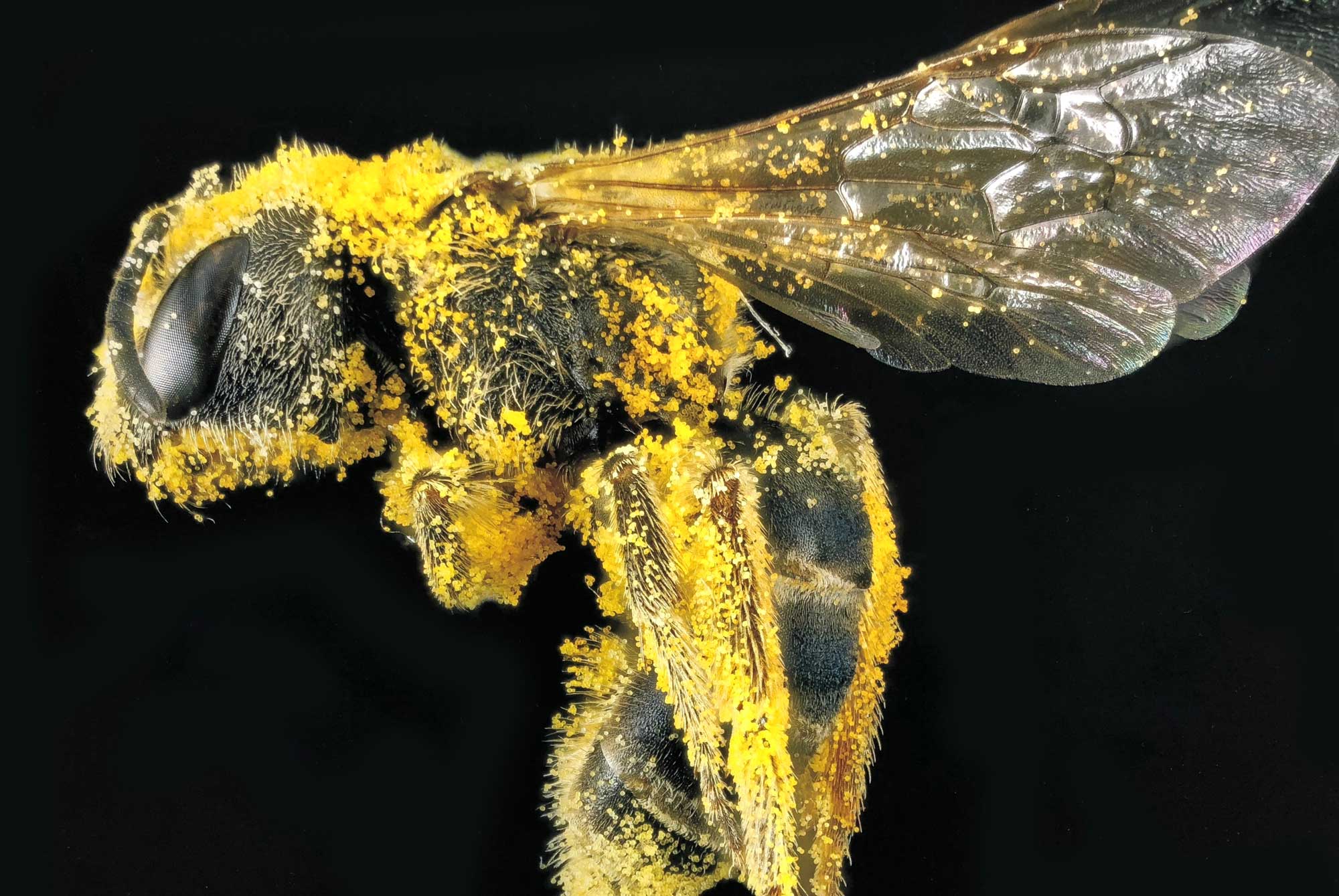 A bee covered in pollen. (Photo via Shutterstock)

More than 75 percent of the world’s food supply is dependent on pollination by bees, insects and other animals, according to the United Nations Food and Agriculture Organization. In addition, between $235 billion and $577 billion in food production worldwide is at least partly dependent on the activity of pollinators.

In the United States, honeybees are responsible for about $20 billion in food production and are necessary for pollinating many important crops, the American Beekeeping Federation reports.

The reason honeybees are so crucial is because they are the most manageable of the world’s pollinators, said local beekeeper Mike Rusnak, who maintains the hive at the Forest Preserve District’s Plum Creek Nature Center.

And because many beekeepers can travel with their hives, they are in high demand throughout the year, traveling across the United States to help pollinate the foods we eat every day. Take almonds, for example. In the winters, thousands of beehives are taken to California to pollinate the almond trees. These trees depend entirely on honeybees for pollination, according to the American Beekeeping Federation.

“In the United States, every beehive on wheels is in California at the end of February to pollinate almonds,” Rusnak said.

The timing of the bees’ arrival is important: If they arrive too early, they won’t pollinate the almonds, and they have to leave as soon as pollination is complete because the farmers spray the trees with chemicals that can harm the bees.

After almond pollination is complete, many of the beehives continue traveling throughout the United States on a mission to pollinate various crops, Rusnak said. They move to Washington to pollinate the apple trees, Oregon for the cherry trees, Michigan for the blueberry crop, Wisconsin for the cranberries and then many end up here in Illinois in July to pollinate the pumpkin crop.

Nuts and stone fruits (such as cherries, peaches and plums) are just a few examples of foods that are “totally dependent on bees,” Rusnak said. Without them, these foods would be much more expensive for consumers because the cost to produce them would be much higher.

How a Honeybee Hive Works 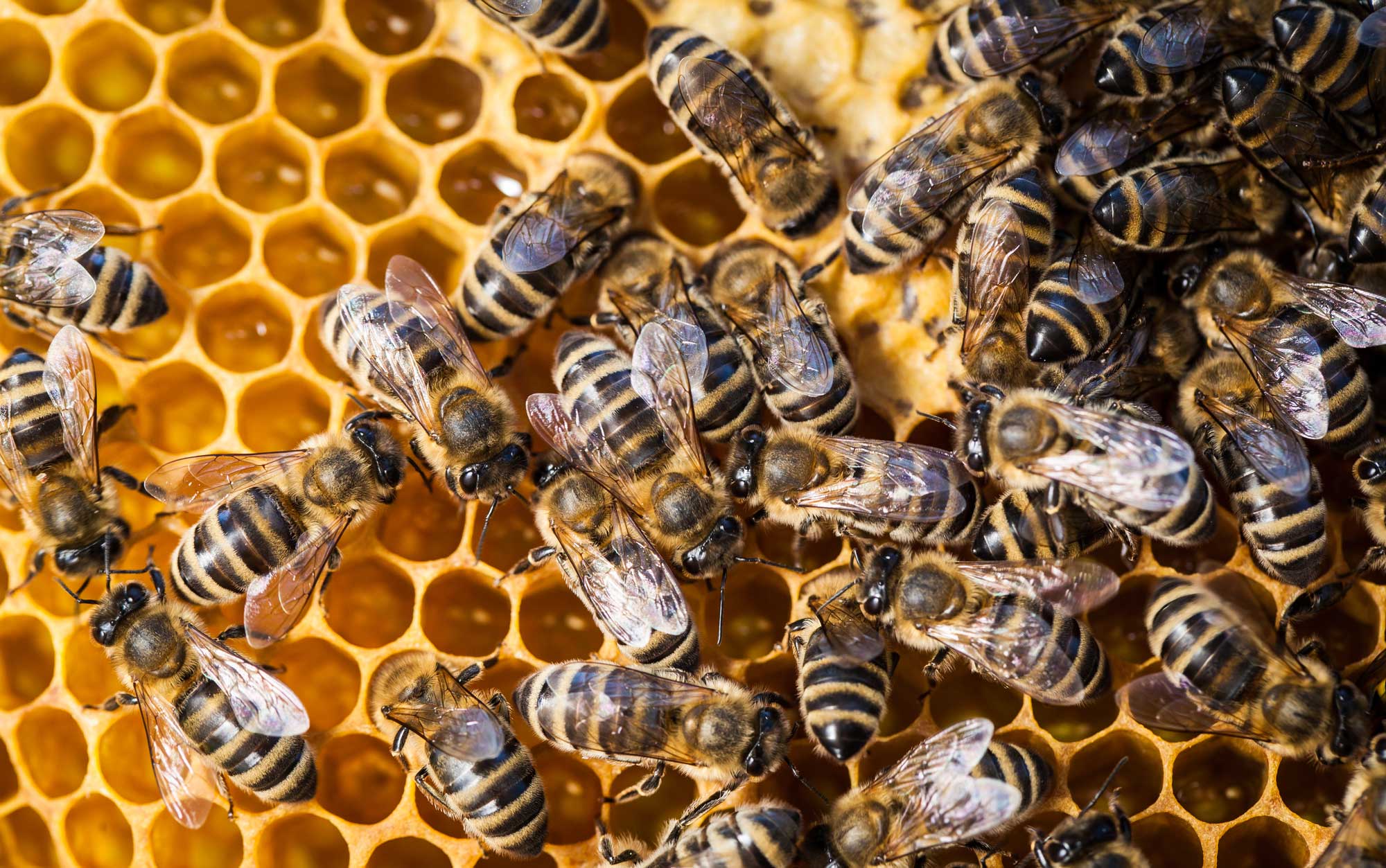 The bees in a honeybee hive all work in service to the queen, who is the only fertile female in the hive. The worker bees are all females, and they do all of the labor to maintain the hive: preparing the food, guarding the hive and heating and cooling the hive. The drone bees, the males in the hive, have just one job: to mate with the queen, who can lay thousands of eggs a day in the warm months, Rusnak said.

About 90 percent of the honeybees in a hive are female worker bees, Rusnak said, while only 10 percent are male drones. And the worker bees are the ones responsible for pollination, because they are the ones that leave the hive to collect pollen and nectar.

(Click and drag your mouse to explore all angles of the beehive. Note: 360-degree experience may not work on all browsers)

Worker bees live only about six weeks during the summer months, but in their short lives they travel a distance equal to approximately 1.5 times the circumference of Earth, according to the American Beekeeping Federation.

The short lifespan for the honeybees is related to their workload. “Their wings wear out and they just don’t come home,” Rusnak said.

And while a hive of bees can produce about 60 pounds of honey for every 1 pound of beeswax, the actual output for each bee is shockingly small. Each worker bee makes about 6 drops of honey in its lifetime, and of that 3 drops is consumed, Rusnak said.

How to Help the Bees 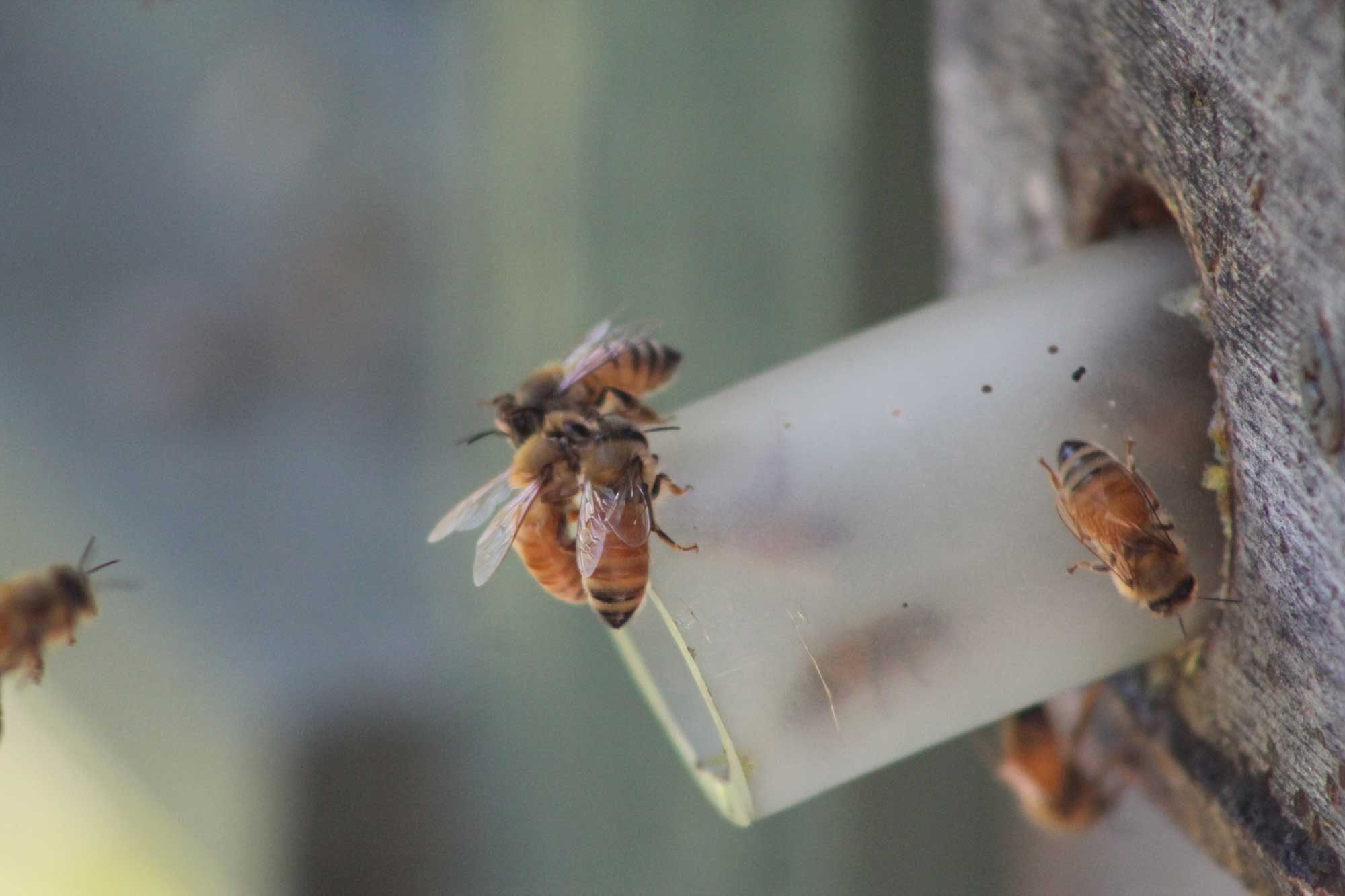 Bees have garnered headlines the past few years because their population has been declining, due to a phenomenon called colony collapse disorder, or CCD, which was initially identified in 2006. According to the U.S. Department of Agriculture, colony collapse disorder is defined as a dead colony that has no living adult bees but still has a live queen bee as well as immature bees and honey. Since 2010, the number of hives lost to CCD has declined, but the bee population continues to face many threats, including diseases; pests and parasites; exposure to pesticides; and poor nutrition.

You can do your part to help the bee population flourish by taking a few simple steps in your own yard and garden:

And, under most circumstances, you don’t need to fear bees or the potential for bee stings. Among most bee species, it’s only the females that have the stingers – and they don’t want to sting you, Rusnak said. A bee that stings faces certain death, so it’s something they avoid. Rusnak explained that he’s been stung many times through his beekeeping work, but that’s because it sometimes requires him to be in the hive, which agitates the bees. Otherwise though, he often enjoys just sitting back and watching the buzzing hive in action without fear of being stung. 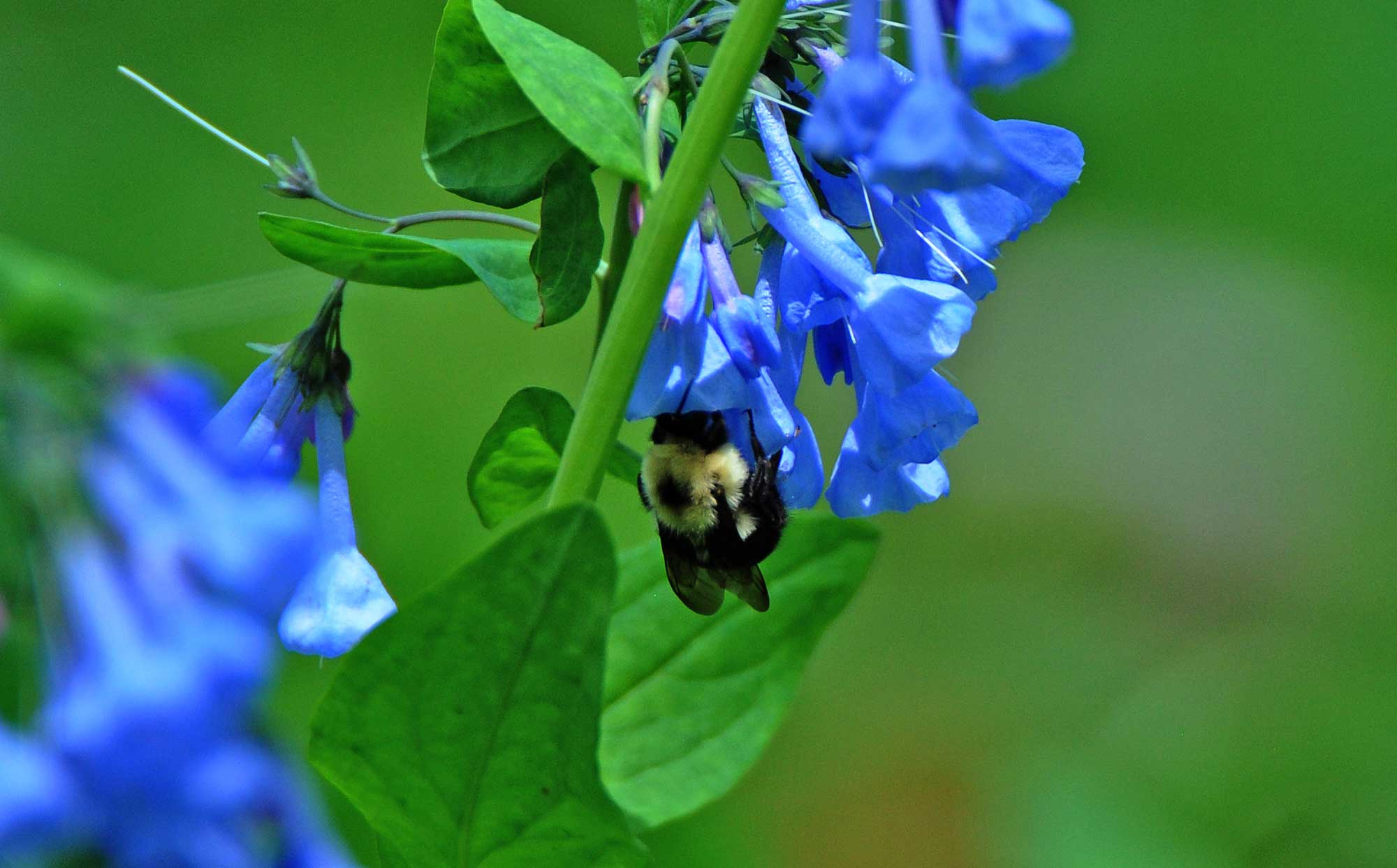 Rusnak has been a beekeeper for about 15 years and has 36 hives in Will County and throughout Illinois. He regularly hosts “Meet a Beekeeper” programs at Plum Creek Nature Center.

He said the programs are informal, and provide an opportunity for people to observe the hive at Plum Creek and ask questions of an experienced beekeeper. “Come on in and ask every question under the sun,” he said, encouraging people interested in attending one of the programs.

Many who attend are interested in getting started in beekeeping or are beginning beekeepers, but Rusnak said it’s a family-friendly event. Kids are encouraged to attend and ask questions, and those youngsters who are able to find the queen in the hive can visit the front desk for a sticker for their efforts.