Allison Borecky’s boots crunched into the snow and ice crust as she walked the southern regions of Braidwood Dunes and Savanna Nature Preserve on a cold winter day.

Dressed in insulated overalls and thick boots while clutching a clipboard, the natural resource management crew leader patrolled the site looking for two crews that were out throwing handfuls of seed into the snow. Eventually, she joined a crew tossing seed near tall grass, just beyond a frozen pond filled with cattails.

“People are used to planting in bare soil and bare ground,” she said. “What we’re doing is overseeding in the snow. We’re throwing down seed in the bare areas between the plants. The snow insulates the seed and protects it until conditions allow for it to germinate.”

Staff mixed seed with rice hulls to make it easier to spread.

“That just acts as a carrier for the smaller seeds, so they don’t all sink to the bottom of the bag or the bucket,” Borecky explained. “Our goal is to get it out there, get it on the ground and let nature do what it does.”

The cold-weather seed distribution of around 350 different plant species takes place each winter in preserves throughout Will County. Snow cover is required for this annual endeavor, which requires the seed to lie dormant until spring arrives.

For more than 20 years, the Forest Preserve has been spreading literally tons of seed over hundreds of acres during winter to restore the plant diversity that once adorned the Will County landscape. Precious seeds are hand tossed or spread by tractors in January or February, not exactly what most people would expect what with spring planting so ingrained in the average gardener’s mind.

But snowy winter days are the perfect time to set this seed-to-sprout cycle in motion. And after experimenting with different times in the winter, Forest Preserve staff believe they have found the snow seeding sweet spot.

“We experimented with earlier and later in the winter and are now feeling like January or early February is the prime time to get the seed down, especially when the ground is frozen and there is light snow cover,” said Floyd Catchpole, land management program coordinator. “Snow cover hides the sown seeds so the plants can wait until spring to emerge.

“Seed planted in fall can be eaten by small mammals and bugs,” Catchpole explained. “In winter, the bugs are mostly dormant. And the seed often melts into the snow on a sunny day, making it hard for mammals to find.”

Even better is when additional snow falls and buries the seed, he added.

“The ground is broken up by the freeze/thaw cycle, and melting snow and rain washes the seeds into tiny cracks in the ground. Many seeds need exposure to winter temperatures, a process called stratification, before they can germinate in the spring. Nothing stratifies native seed better than being out in winter.”

Juli Mason, the Forest Preserve’s land management program coordinator, said this theory was proven when a contractor was hired to seed a former farm field in 2018. Part of the field was seeded during cold conditions in mid-February. Then the contractor’s tractor got stuck in the mud as it was clearing the field and it couldn’t be freed until spring. The rest of the seed was sowed in late March.

In the 2019 growing season, the difference was apparent, Mason wrote in an article for the Grassland Restoration Network. The area seeded in spring was dominated by foxtail, an annual grass that tends to fade quickly in restorations once the native plants get established. In contrast, the portion of the field that was originally seeded during the winter had a diversity of native plant species including: blue vervain, tall coreopsis, common boneset, sneezeweed, water horehound, black-eyed Susan and false boneset.

The message was clear, Mason wrote: “Don’t wait until spring to seed a diverse prairie mix, unless you want to give warm season grasses an advantage at the expense of diversity.” 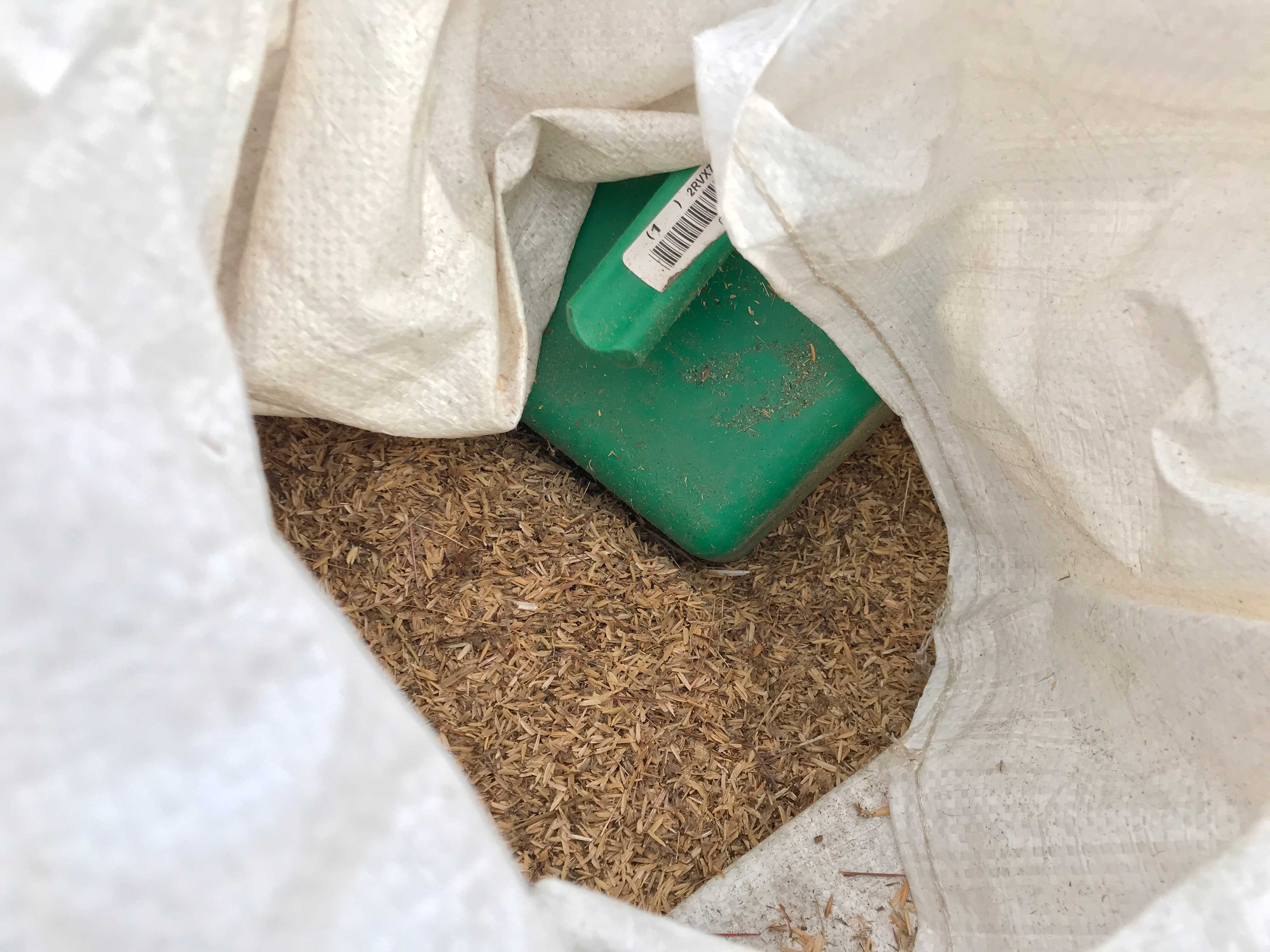 Each winter, staff and contractors spread thousands of pounds of native seed, which comes from three main sources: purchased, donated or collected.

Purchased seed is typically used for larger restoration seeding projects such as the one at Prairie Bluff Preserve in Crest Hill.

The seed being used in southern Will County preserves that feature sandy soil comes from an agreement with The Nature Conservancy. The agency provides surplus seed from a nursery in an area of Indiana that features the same type of sandy soil. In exchange for the seed, the Forest Preserve provides monitoring and management assistance at the nursery.

Some of the seed also comes from seed collection within the forest preserves.

“Staff and volunteers collect seed from various preserves and use it to establish native plants where invasive species control has left bare ground and in areas that are degraded and need more native diversity,” Catchpole said.

Most of the winter seeding takes place in areas where agricultural fields are being retired and converted back to native habitat.

“The rest of the seed is primarily used in areas where invasive species have been treated or where the native community has been otherwise declined,” Mason said. “Broadcasting native seed is needed to facilitate the recovery of native communities.”

While the winter seeding process has been going on for a couple of decades, Catchpole said he doesn’t really see a time when it won’t be necessary.

“I doubt we will ever stop seeding," he explained. "All our preserves have lost native plants, and there is so much land that we have not even begun restoring." 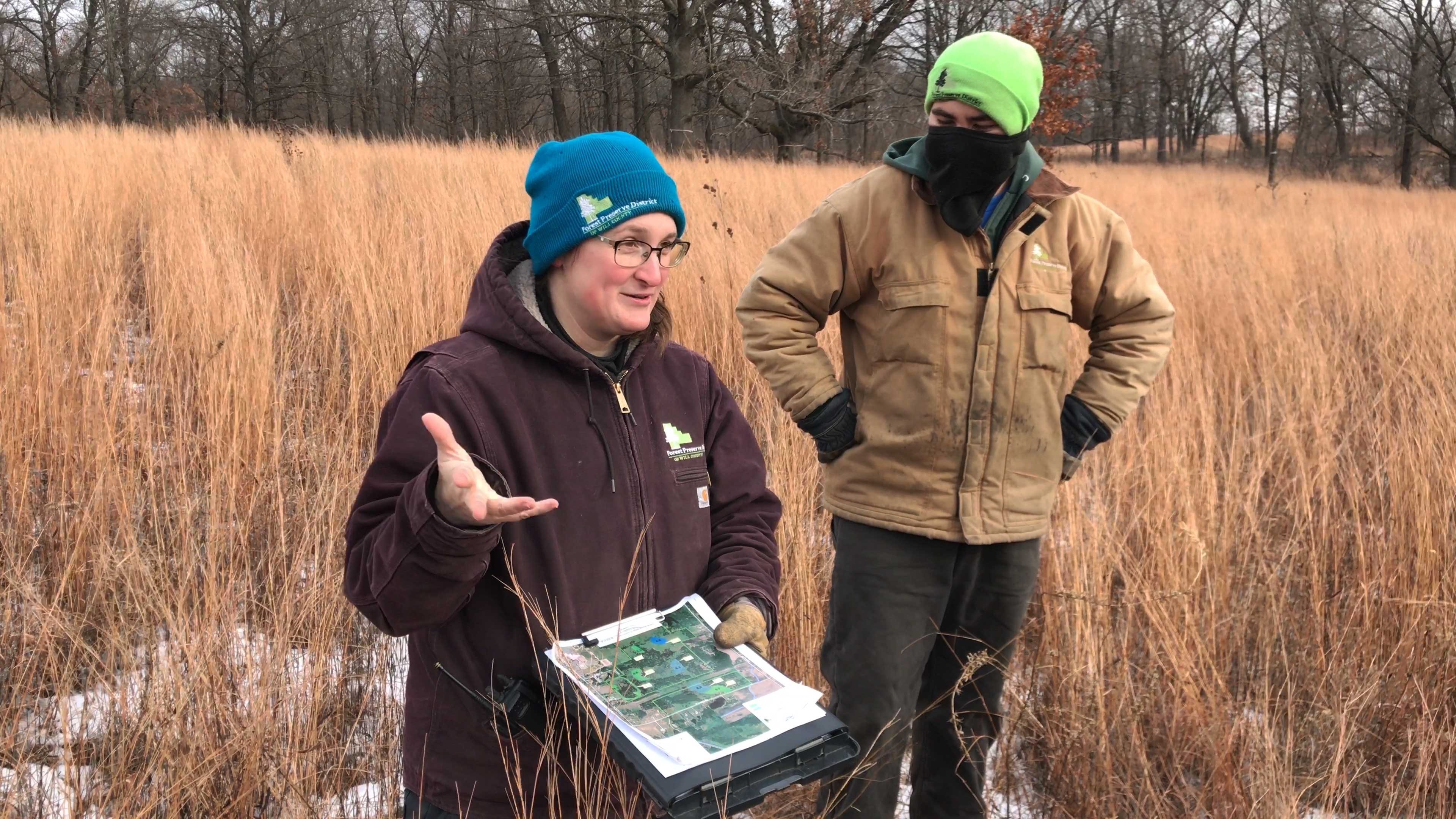 Borecky (pictured above) fellow Forest Preserve staffers and contractors will keep walking gingerly over snow and ice each winter as they spread seed for seasons to come.

“We’re missing certain species here,” she said during work at the Braidwood Dunes site. “We know they used to be here because we have records of it. But they’re just not found any more, for one reason or another. So, we’re trying to reintroduce some of these species or (in some instances) get them back to healthy, historic levels.”

Borecky, who started with the District in 2003 as a seasonal employee, loves visiting Braidwood Dunes in the spring and summer to see the fruits of the Forest Preserve’s labor.

“It’s neat to see the changes to the front section of Braidwood Dunes,” she said. “It’s almost unrecognizable. There has been so much work being done to thin out the invasive plants, shrubs and trees, it looks so much different than it did 15 years ago.”