Why are some animals the wrong color?

Animals are one of the first things we learn about as kids. We learn that cows moo, lions roar and frogs ribbit. We learn about farm animals and wild animals from storybooks and songs, and as our knowledge grows, we learn how to identify different animals by their appearance.

In addition to size and shape, one of the first things we consider when identifying an animal is its color. We know deer are brown and skunks are black with that iconic white stripe. We know birds come in many colors and sizes, and those colors and sizes are what help us tell a robin from a sparrow, for example.

But sometimes animals are seemingly the wrong color. In some cases, this is easily explained away. Some animals, particularly those in the arctic, change color in the winter to match the snowy landscape. And some animals, namely the chameleon, are famous for their color-changing ability. Other times, though, a wrong-colored animal seems to defy explanation, or at the very least generate awe.

Learn more about why animals sometimes look much different than we expect — or sometimes aren’t what they seem at all.

In some cases, an animal may not be the color you expect it to be simply because multiple color expressions occur in some species. One such example is the red fox. While most red foxes are the rusty red color we are so familiar with, not all are, and this often takes us by surprise. Some red foxes are the usual reddish-brown but with a black stripe down their backs and another across their shoulders, while others can be silvery or nearly black in color. The striped foxes are called cross foxes, and this phenotype occurs in about 25% of red foxes, according to the Animal Diversity Web. Silvery or black foxes are called silver foxes, and they are much more rare, occurring in only about 10% of red foxes. 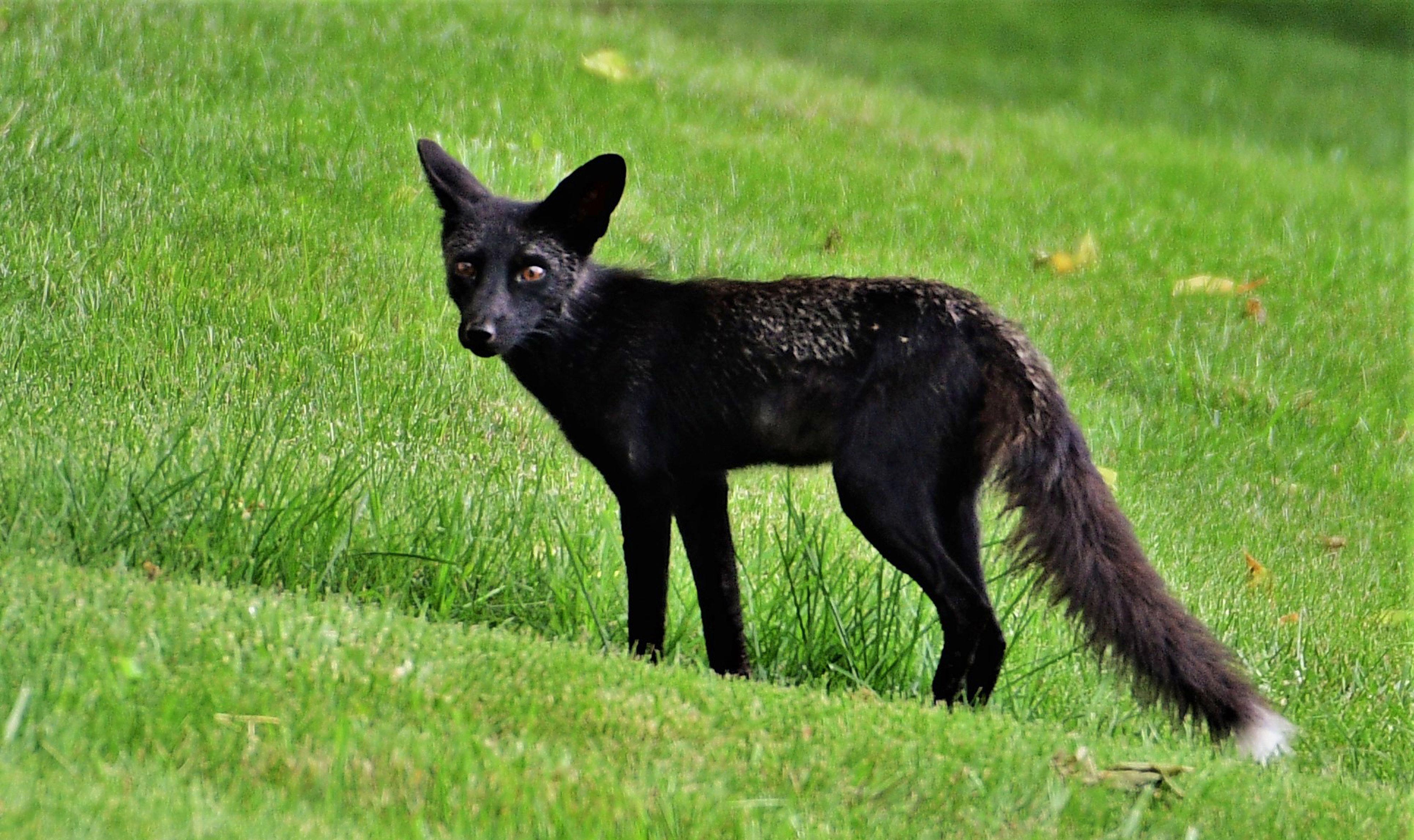 Similarly, coyotes are not always the color we expect. Most are grayish-brown in color, but their fur can range from a blonde-like color to a reddish-brown to a dark gray or almost black color, according to the Pennsylvania Game Commission. When coyotes are a different color than their usual grayish-brown, they are often confused with other animals, like wolves or even dogs.

For some animals, namely bird species, it’s normal for males and females to be entirely different colors. Take two of our most brightly colored birds, indigo buntings and northern cardinals. Male buntings are a bright blue, while male cardinals are an eye-catching red. The females are more drab in appearance, however. Female indigo buntings aren’t really indigo at all. Instead, they are brown in color. And female cardinals are mostly buff colored with just a few red highlights. Many ducks also have much more colorfully feathered males than their female counterparts.

In many cases, when an animal is not the color it should be, it is white or partially white instead. This can result from one of two conditions caused by genetic mutations: albinism or leucism. Both conditions relate to how pigment is expressed in an animal, but they occur for different reasons.

Albinism results from a genetic mutation that disrupts that animal’s ability to produce melanin, the pigment that gives many animals their color, according to the National Park Service. Animals, including humans, with albinism must inherit the gene from both parents, although the parents themselves may not necessarily have albinism. Only melanin production is affected by albinism. Because these animals still produce other pigments, animals whose coloring is dependent on pigments other than melanin will still display these colors. For example, some snakes produce carotenoids that affect their coloring. These pigments are still produced and expressed, so the animals may have color in these areas and be white everywhere else.

A leucistic robin (Photo via Shutterstock)

Leucism also has to do with melanin production, but these animals still produce melanin. The problem is in how the melanin is distributed in the animals’ fur, feathers and skin. In some areas, the melanin is distributed normally, while in other spots it is absent, according to Project FeederWatch. Leucism can result in just a few white patches or an almost entirely white appearance. Animals that are partially white as a result of leucism are sometimes called piebald.

How can you tell if an animal is white because of albinism or leucism? The easiest way is to check its eyes. Animals (and people) with albinism will have pink or reddish eyes because the lack of pigment makes the color of the blood vessels in the eye visible, according to the National Park Service. Portions of their skin not covered by fur or feathers will also be light colored or pale colored. For example, while a bird might normally have orange legs, a bird of that species with albinism will have pale-colored legs because the skin lacks pigment.

Both leucism and albinism are rare in animals, although albinism is much more rare, occurring in between 1 in 20,000 and 1 in 1 million animals, depending on the species, Treehugger reports. It is thought to be more common in amphibians, reptiles and birds. Animals with leucism and albinism can be more vulnerable than other animals because of how it affects their camouflage and social structure, as well as placing them at increased risk of poaching. So, when they are found in the wild, they are often taken to animal sanctuaries and zoos so they can be protected.

Albinism and leucism aren’t the only genetic mutations that can cause an animal to stand out for its unusual coloring. It happens in many other ways as well, resulting in other seemingly miscolored animals. 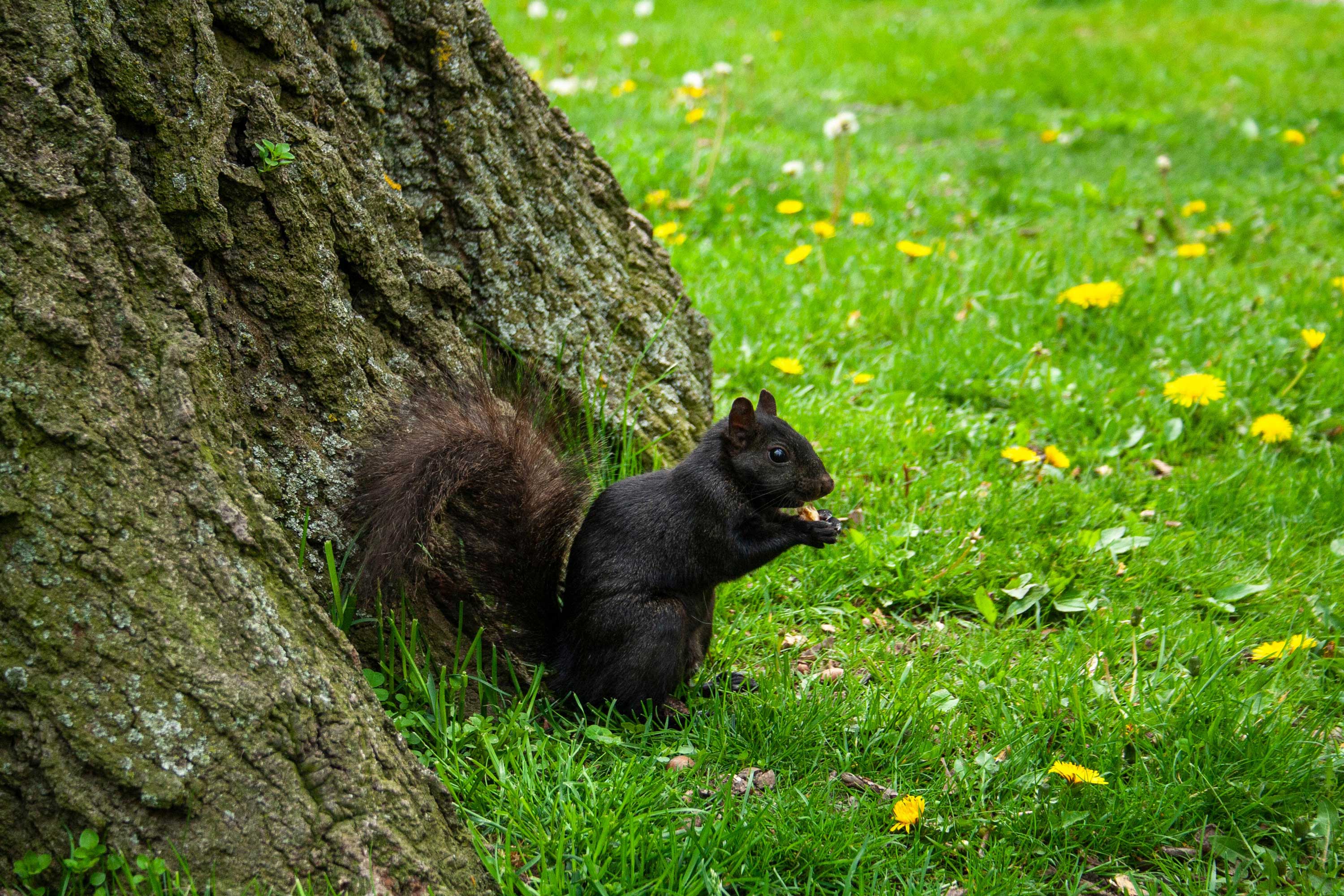 Other animals can experience melanism as well. In fact, the black panther is the melanistic expression of a jaguar, although it was once thought to be a separate species altogether, according to the Children’s Eternal Rainforest. Other wildcats can also be all black because of melanism. And melanin is not the only pigment that can be affected by genetic mutations. Erythrism is a condition that results in overproduction of red and orange pigments, while xanthism is the overproduction of yellow pigments.

Black squirrels are common enough that they don’t generate headlines, but sometimes it’s quite the story when an animal turns up looking anything but normal. Case in point: yellow cardinals. We know male cardinals are red and females are a buff color, but every once in a while a yellow cardinal is spotted in the wild, and it’s a real showstopper. Such was the case in 2021 when a yellow cardinal was spotted in Rushville, Illinois. Similarly, yellow cardinals seen in Alabama in 2018 and in Florida in 2019 generated a lot of fanfare.

Yellow cardinals are a one in a million phenomenon — and probably even more rare than that, Gregory Hill, a professor at Auburn University who is an expert on bird coloration, told CBS News. The unusual coloration is the result of a genetic mutation that blocks yellow pigments consumed by the birds from being converted to red pigments, which normally give the birds their color. Instead, those pigments, called carotenoids, are expressed as yellow.

Only about three yellow cardinal sightings are reported each year, and while cardinals are the most well-known example, it can occur in any red-colored bird, according to Hill.

Sometimes an animal is not the color you expect it to be because you aren’t actually seeing the animal you think you are. Many animals have lookalikes, and sometimes it’s more a case of mistaken identification than an animal being the wrong color.

One such example would be foxes. Many people are familiar with red foxes, but gray foxes — another species altogether — have a range that overlaps with red foxes in many places. The two foxes live in many of the same types of habitat and have many of the same behaviors and look quite similar. Adding to the confusion is that red foxes can sometimes have gray fur or gray patches and gray foxes can sometimes have red fur or red patches, according to the National Wildlife Federation. The easiest way to tell the difference between a red fox and a gray fox is to look at the tips of their tails. A red fox will have white fur at the tip of its tail, while a gray box will have a black tail tip.

This can also be true of many bird species. The green heron, for example, has a similar body shape and habitat to the black-crowned night heron, least bittern and little blue heron, which can create some difficulty in identifying what bird you are seeing. In these cases, it’s helpful to know some of the distinguishing features between the two species so you know what bird you are seeing.