What you need to know about tick season

It's important to be vigilant about ticks when outdoors

After a long winter, nothing compares to spending time outside. But in Will County, spring is the season when it’s most important to be vigilant about ticks when outdoors.

Tick-borne illnesses, along with those caused by mosquito and flea bites, more than tripled in the United States between 2004 and 2016, according to a 2018 report by the Centers for Disease Control and Prevention.

In Illinois, adult ticks are most active in April, May and June, according to the Illinois Department of Public Health. While tick season continues through the summer into mid-fall, the life cycle of different tick species varies and plays a role in when they are most likely to be found on humans.

At least 15 tick species can be found in Illinois, but the Illinois Department of Public Health reports that only a handful are typically encountered by humans: the American dog tick, sometimes referred to as the wood tick; the blacklegged tick, more commonly known as the deer tick; the brown dog tick; the lone star tick; and the winter tick. 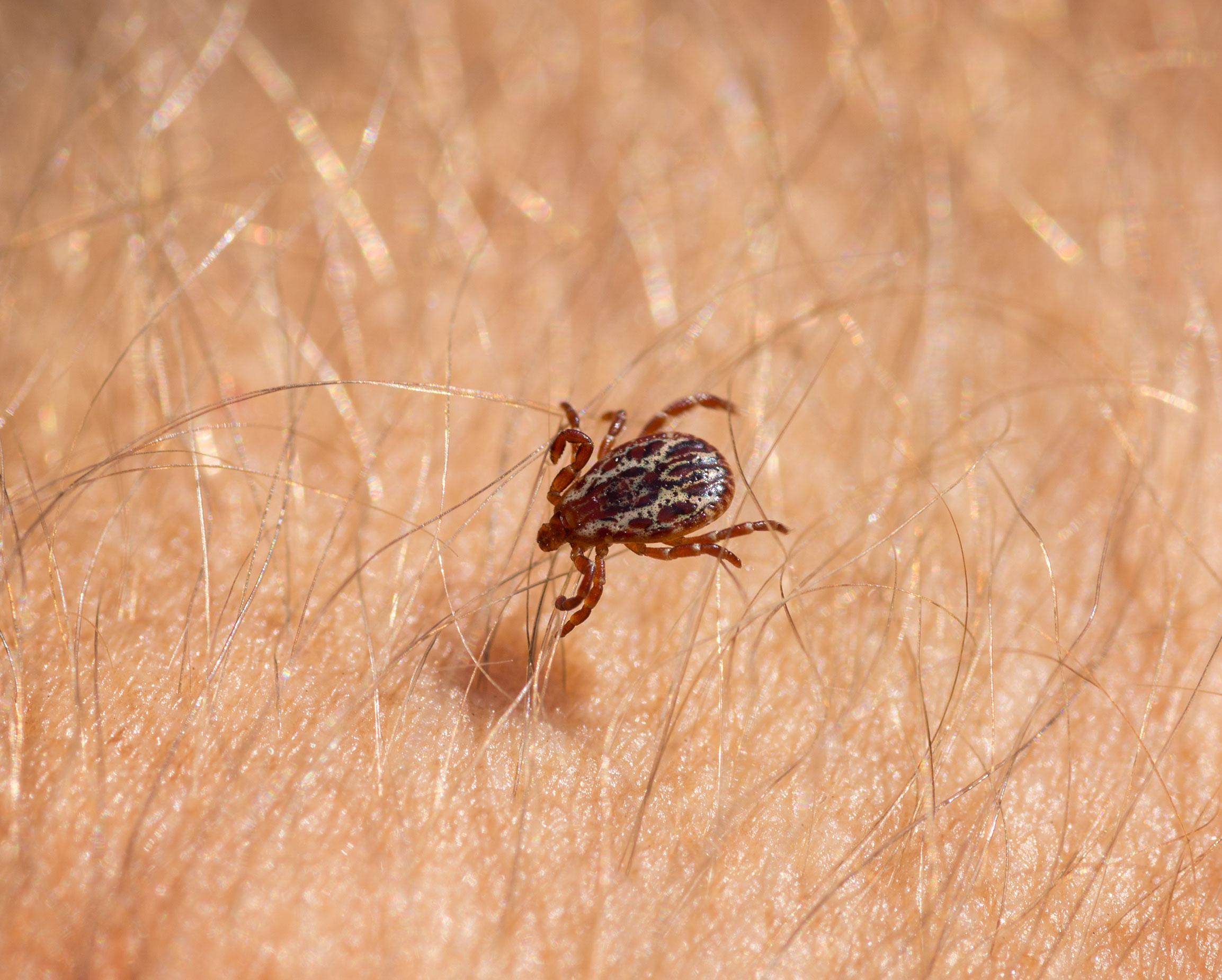 Of the five tick species encountered by humans, three — the American dog tick, the blacklegged tick and the lone star tick — are known to transmit diseases to humans, the public health department states. In Illinois, the most common diseases associated with tick bites are Lyme disease, Rocky Mountain spotted fever and ehrlichiosis.

Ticks — which are actually arachnids and not insects, as commonly thought — are divided into two categories, hard ticks and soft ticks. Hard ticks have a hard shield behind their mouth parts and are shaped like a flat seed when they are unfed, while soft ticks do not have a shield and more typically resemble a raisin in shape, the Department of Public Health reports.

The species most often "picked up" by humans are the hard ticks commonly found in Illinois. Soft ticks, on the other hand, feed on bats and birds and are not usually encountered by humans unless they are nesting or roosting in a building.

After ticks hatch, they must consume blood from humans and other animals for survival. Because they feed on different animals during different stages of their lives, they can pick up diseases and transfer them to their hosts.

Tick-borne diseases can range from mild to severe, and many of the illness have similar symptoms, including fever, chills, body aches and pains, and a rash, the CDC reports. Rashes can vary depending on the illness. For example, with Lyme disease, a target- or bullseye-shaped rash is often the hallmark and typically develops before other symptoms. The rash that accompanies Rocky Mountain spotted fever can vary greatly from person to person, but typically starts as small, pink-colored, non-itchy spots that later proceed to a reddish or purple-colored spotted rash.

The CDC advises anyone who experiences a tick bite and develops symptoms associated with tick-related illness within a few weeks of the bite to consult a health-care provider.

Protecting yourself from tick bites 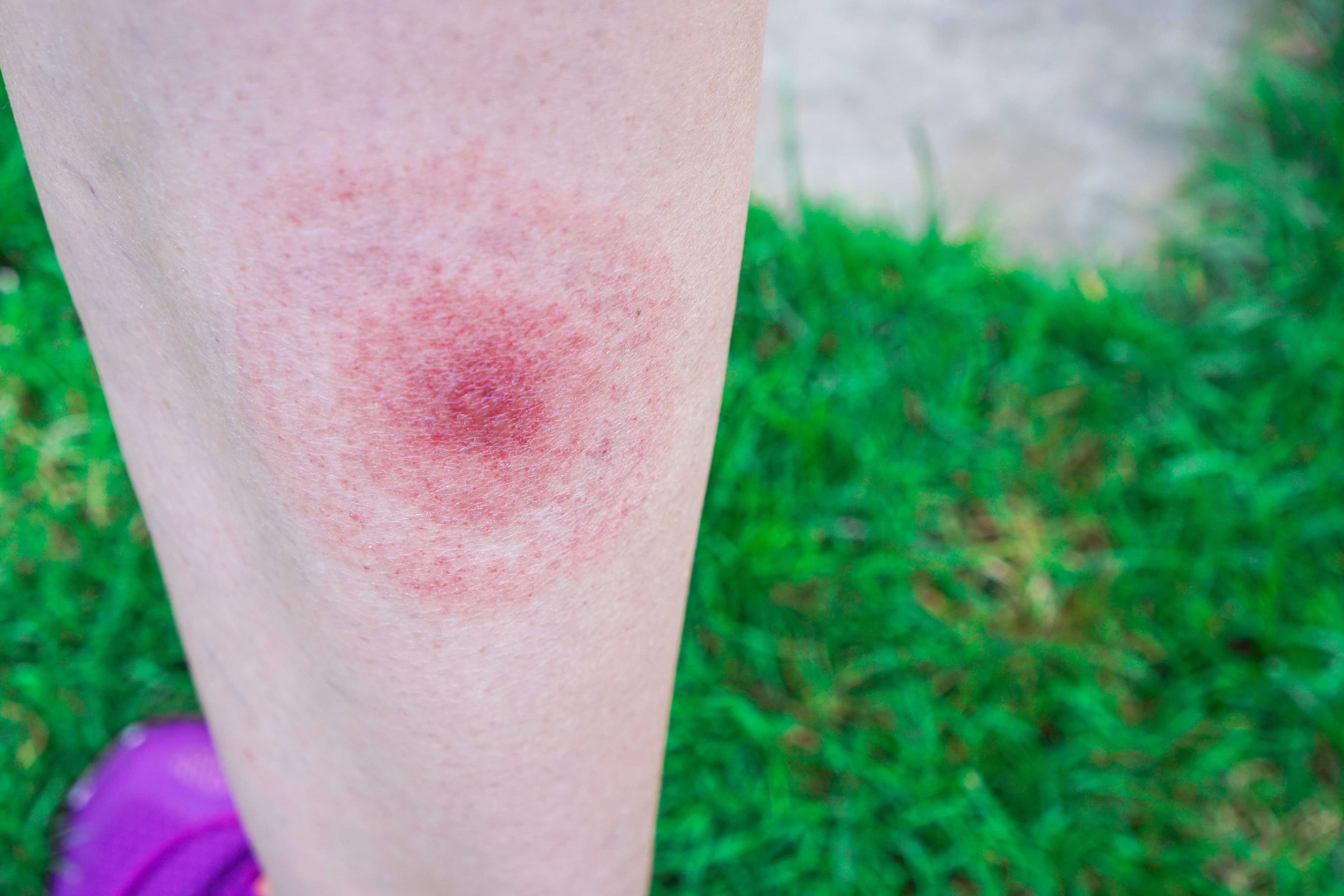 The bullseye-shaped rash that comes with Lyme disease. (Photo via Shutterstock)

The best way to prevent tick-borne disease is to protect yourself against tick bites. To do so, it’s helpful to understand where ticks live and where you may encounter them.

The tick species that are prevalent in Will County and throughout the state live in grasses and shrubs, and not in trees, according to the Illinois Department of Public Health. Ticks move by crawling — they cannot fly or jump — so they typically lie in wait and then quickly move onto a host animal as it moves by.

If you are in areas where ticks are known to be, you should take the following precautions to help avoid bites:

People who spend time in grassy areas should check their clothes and body every two to three hours to help catch and remove ticks before they bite, the health department advises. Make sure to check children, too, if they've been playing outdoors.

Once arriving home, it’s a good idea to immediately remove and check your clothes, and then launder them. This helps to prevent ticks from getting into your house or on other clothes.

If you do find a tick, remove it immediately. If it’s already embedded itself, use tweezers and apply slow, steady pressure to remove it, not using more force than necessary, IDPH advises. Don’t jerk or twist while pulling because that can cause the mouthparts to break off and remain in the skin. 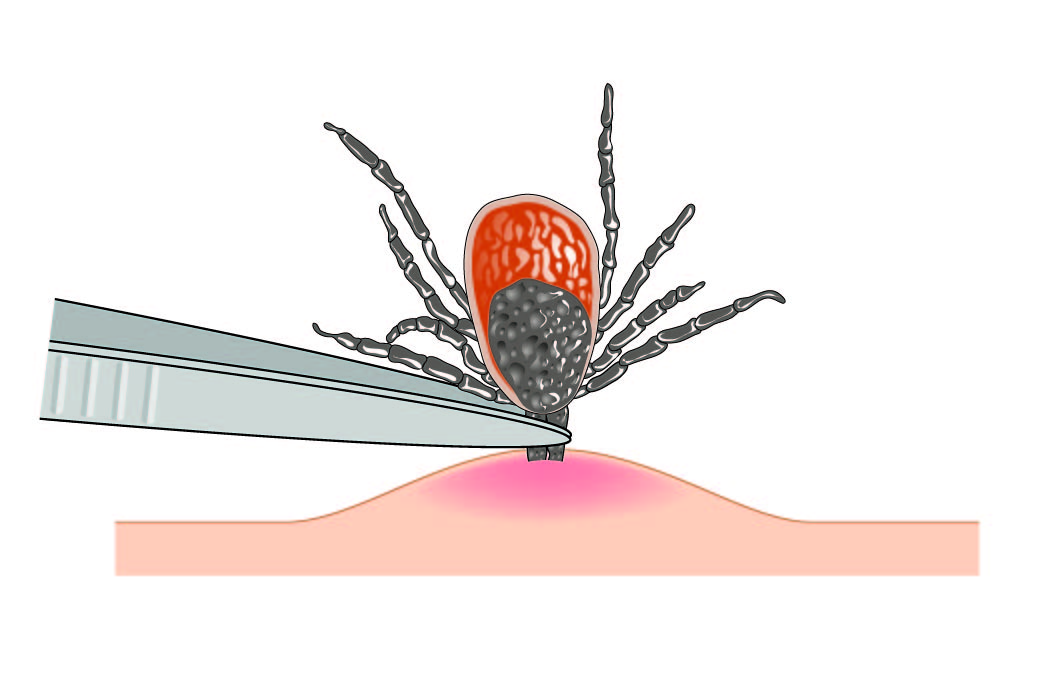 The CDC recommends disposing of live ticks by placing them in alcohol and sealing them in a bag or container or, alternatively, flushing them down the toilet. Do not crush ticks with your hands or fingers.

Once a tick is removed, wash the site of the bite as well as your hands with soap and warm water and use an antiseptic on and around the area of the bite.

Many people have heard old wives’ tales about tick removal, but those tricks — burning a tick with a match or covering it with nail polish or petroleum jelly — should be avoided.

You can help monitor ticks in Illinois through the I-TICK program run by the University of Illinois College of Veterinary Medicine. The goal of the program is to find out more about where and when Illinois residents are encountering ticks.

Through the I-TICK program, several hubs have been identified throughout the state, and these hubs serve as the distribution point for tick collection kits. The hubs then collects the kits to send to university researchers for further study.

I-TICK relies on volunteers throughout Illinois, working with their local hubs, to collect ticks they find on themselves and to record data for the next five days, reporting this information and returning their collection kit within two weeks of the tick encounter. According to the university, ideal volunteer participants for the program are those who work outdoors regularly.