These animals mate for life

Does that mean they love each other like humans? It’s hard to say

Love is a many-splendored thing, but it may be mostly a human thing, too.

It’s hard enough to define love among humans, so understanding love among animals is a tough nut to crack. But we know that some animals grieve the loss of members of their family groups and some are fiercely protective of their offspring, two defining characteristics of human love. And some animals pick a mate and stick with them for life, another behavior that is often considered uniquely human.

It would make perfect sense to us humans that lovebirds, a kind of parrot, mate for life, and they really do, Smithsonian Magazine reports. Continued monogamy between pairs of lovebirds is actually essential to the social structure of their flocks. But do they truly love their partner? And why do they choose a mate for life while so many others do not?

Scientists don’t understand why some animals choose to mate for life while most do not, but one common theory is that monogamy was adopted as a strategy by animals that have a better chance of surviving to maturity if both the mother and the father have a role in raising them, Live Science. This makes sense on its face, but there are known examples of animals that are monogamous despite the fathers playing no part in raising the offspring.

It’s safe to say that even among strictly monogamous animals, it isn’t necessarily love as we know it that keeps them together. And how they show their affection isn’t something we can relate to as humans either. We wouldn’t recognize their courtship displays, and they certainly wouldn’t recognize ours.

Here’s is a non-exhaustive list of some of our local wildlife that mate for life and how they choose a partner and raise their offspring. 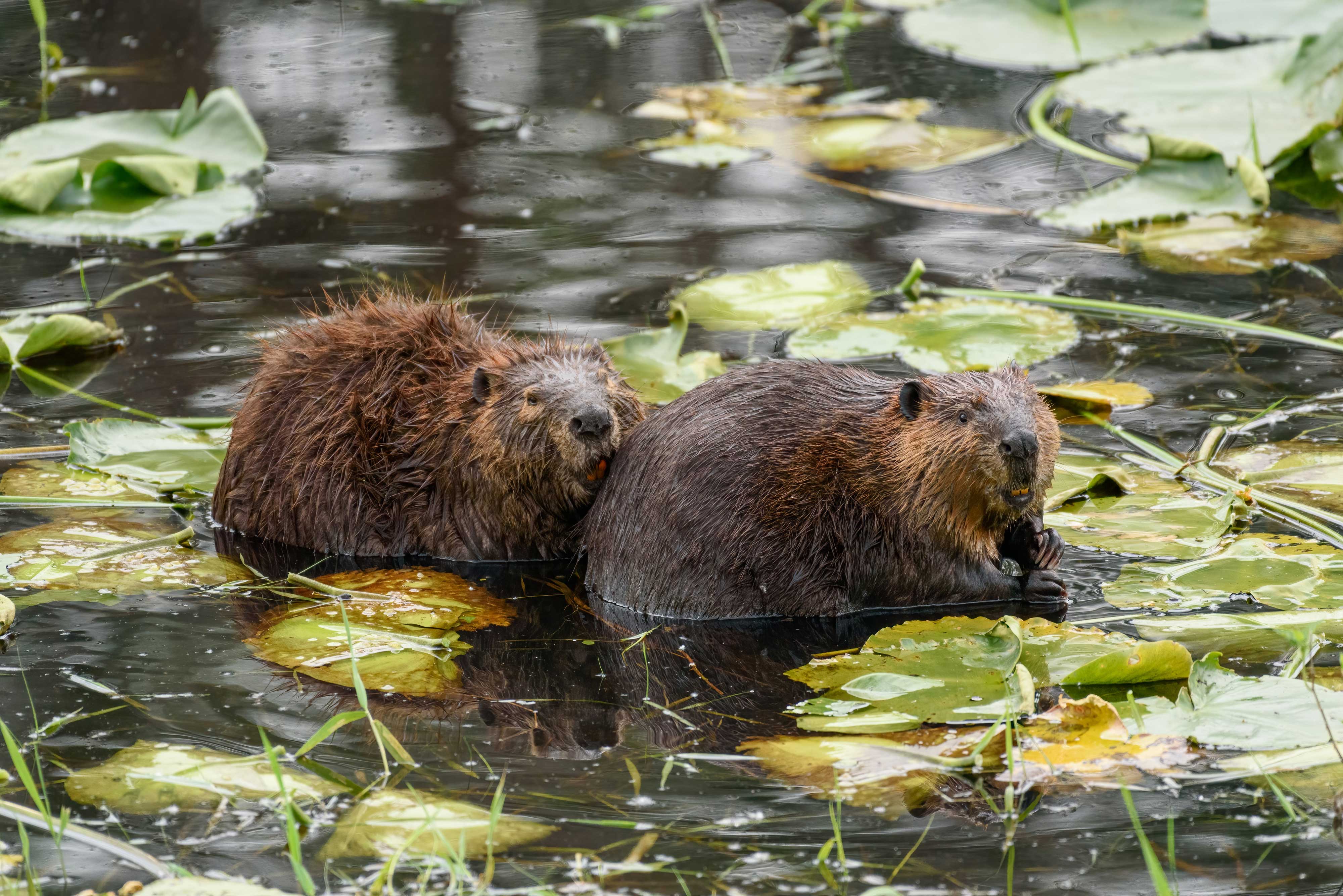 Animal researchers believe that North American beavers mate for life, although if one half of the pair dies, the surviving mate will seek a new partner, Animal Diversity Web reports. Aside from these lifelong partner bonds, beavers also form tight family bonds and are very social animals.

Beavers live in family groups consisting of the mated male and female, the baby beavers born that year, called kits, and the surviving young from the previous year, called yearlings, according to the Smithsonian’s National Zoo & Conservation Biology Institute. In some beaver families, older adults may also stay with the group, but only the male and female mated pair breed each year.

Beavers typically mate between January and March, and the kits are typically born between April and July. They weigh about 1 pound at birth, and they are proficient swimmers at about a week old, the zoo reports. The kits stay with the group for about two years and usually leave to live on their own just before their mother is about to give birth to a new litter. 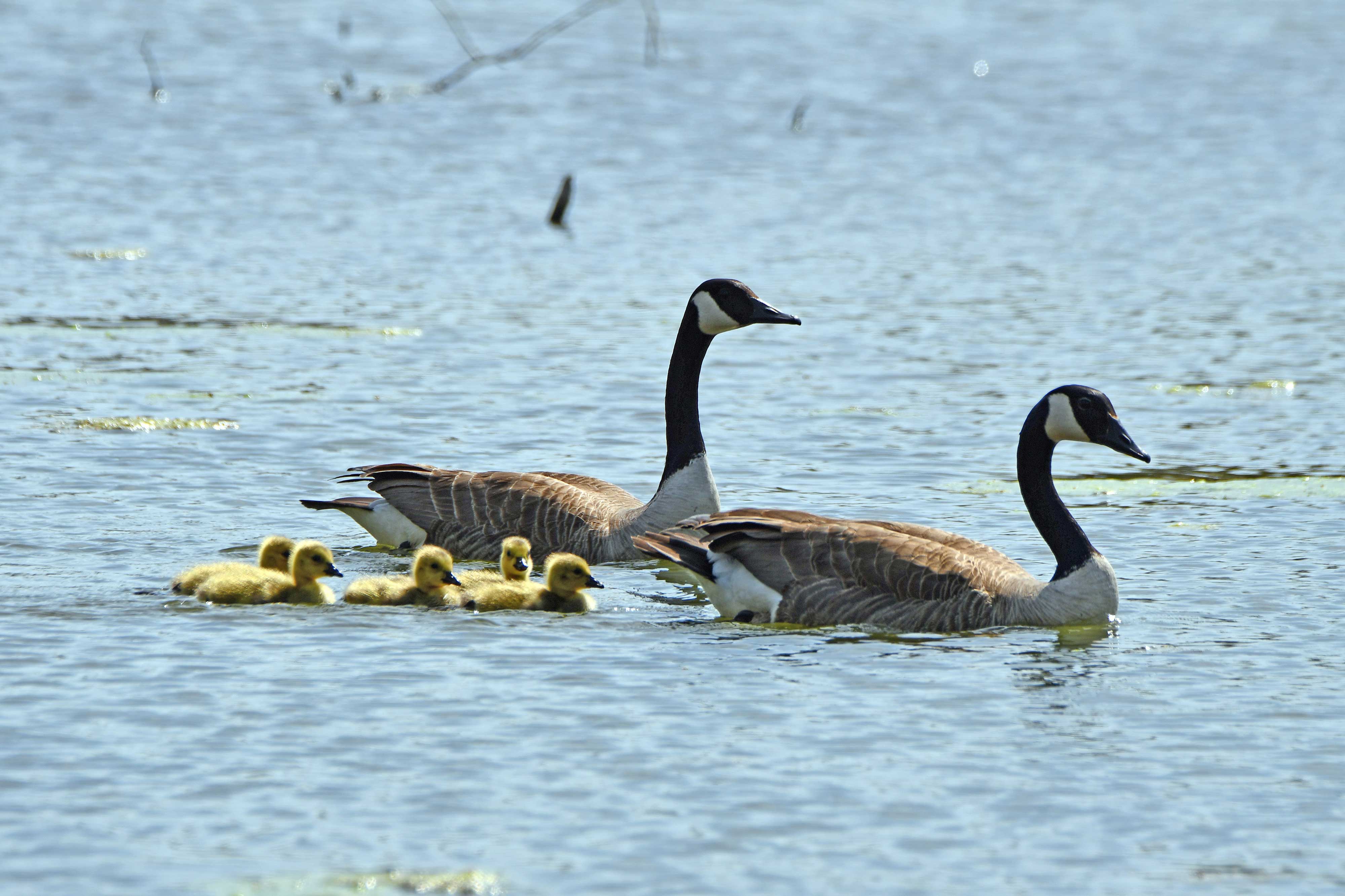 Canada geese have a specific way of choosing a mate, and once they do, they stay together for the long haul, not usually mating with any other geese unless their partner dies, Animal Diversity Web reports. The geese engage in “assortative mating,” which means they select a partner that is similar to them in size.

Canada geese choose their mate when they are 2 years old or 3 years old, according to the Iowa Department of Natural Resources. For the first year of their life, geese live with their parents. After about a year, they leave their family group to live with other young, unpaired geese in groups called gang broods.

When it’s time to mate, the pair will separate from their flocks. The female is responsible for choosing the location for and building the nest, according to the Cornell Lab of Ornithology. She also incubates the nest while her partner stands watch to protect her and the nest from predators and other dangers. Their clutch usually includes between two and eight eggs that hatch after 40 days to 50 days. The goslings are able to leave the nest after a day or two, at which time they can already walk, swim and feed themselves. 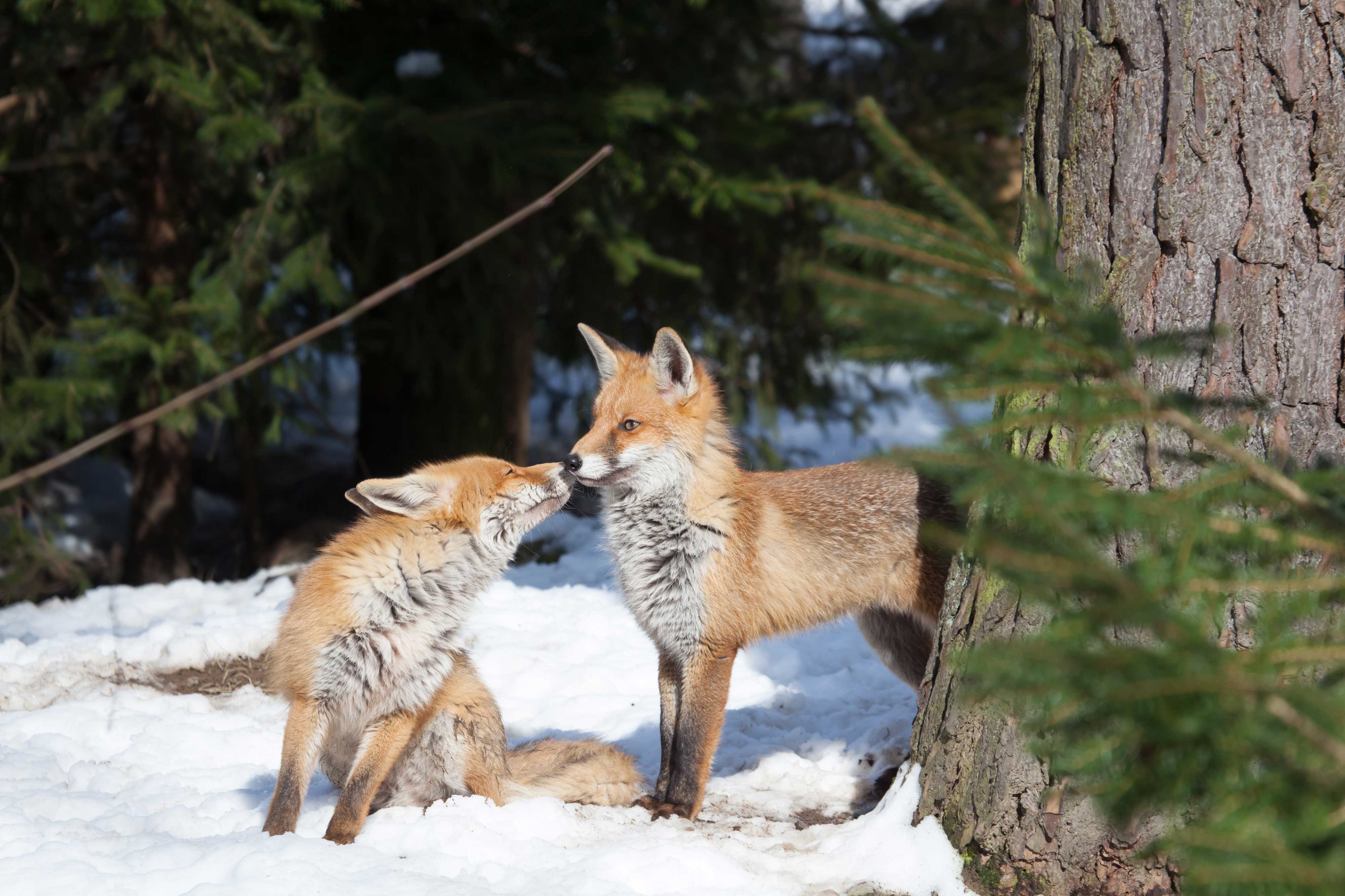 Red foxes can be monogamous, but they are not exclusively so. While some males and females do pair up for life, other males are known to mate with multiple females, Animal Diversity Web reports. In some cases, females who have mated with the same male will share a den.

Mother foxes remain with their kits until the fall following their birth, Animal Diversity Web reports. They reach maturity about 10 months after they are born, but they do not typically mate until they are yearlings. 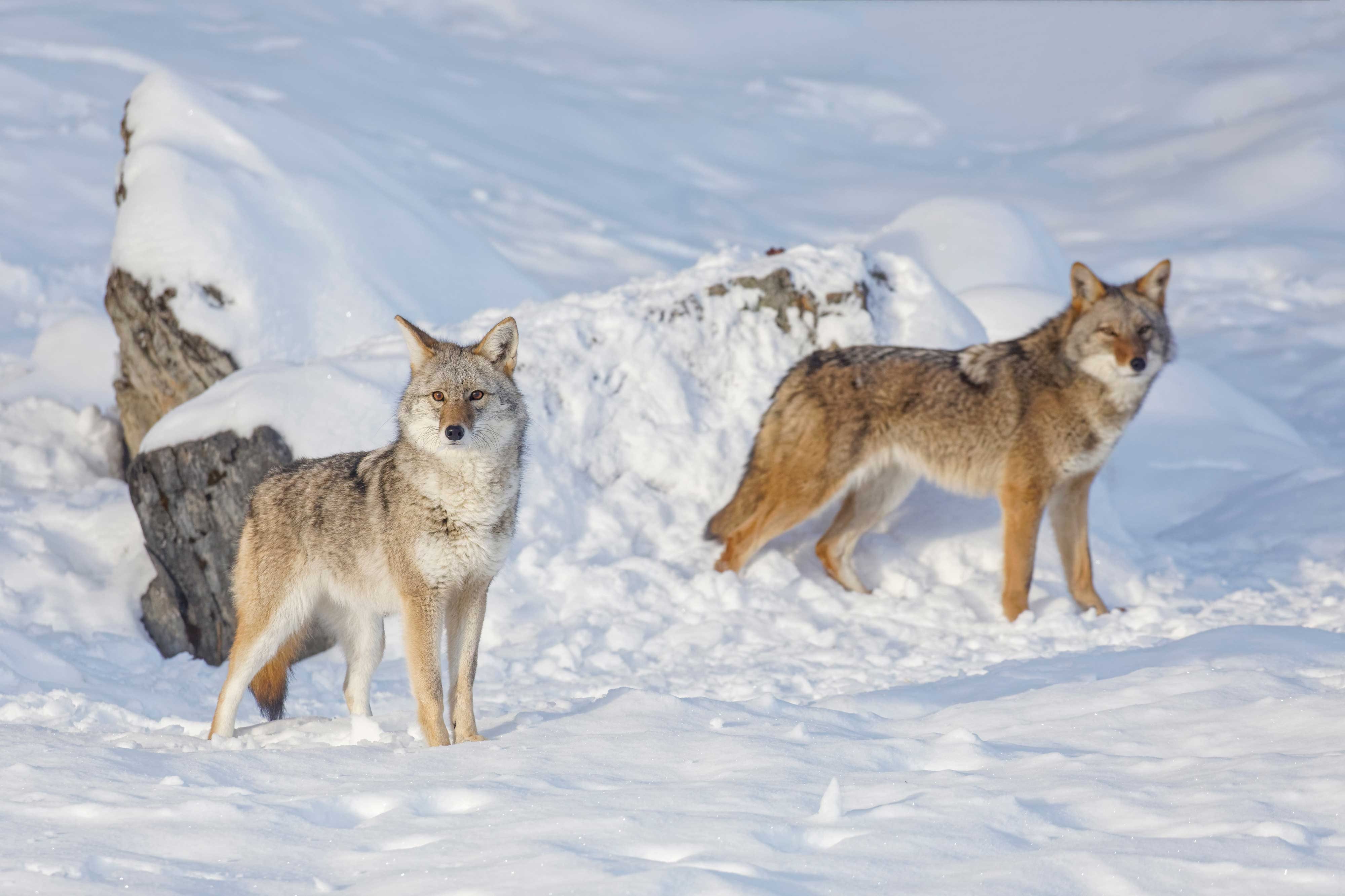 Coyotes are generally thought to mate for life, and they typically live in tightly bonded and well-organized packs, according to the Urban Coyote Research Project. Most often, a pair of coyotes will remain bonded until one of them dies. When this happens, they will form a new partner bond and continue breeding with the new partner.

Mating season for coyotes is February and March, but only one pair within a pack, the alpha pair, will mate. Pups are usually born in April or May, the coyote research project reports. Litters can range greatly in size but most typically include four to seven pups.

While in the den, both the mother and father as well as other adults in the pack help care for the pups, according to Pennsylvania State University. The pups will stay in their dens for several weeks before they start traveling short distances with adults from their pack. Coyotes reach maturity by 1 year old. Males will leave the family pack when they are about 6 months to 9 months old, while female will often stay with the family group.

Coyotes and red foxes aren’t the only canids that mate for life. Gray wolves do as well, Treehugger reports. Wolves live in family groups, or packs, consisting of the male and female pair along with their offspring spanning multiple generations. In many packs, the older siblings help take care of the younger wolves. 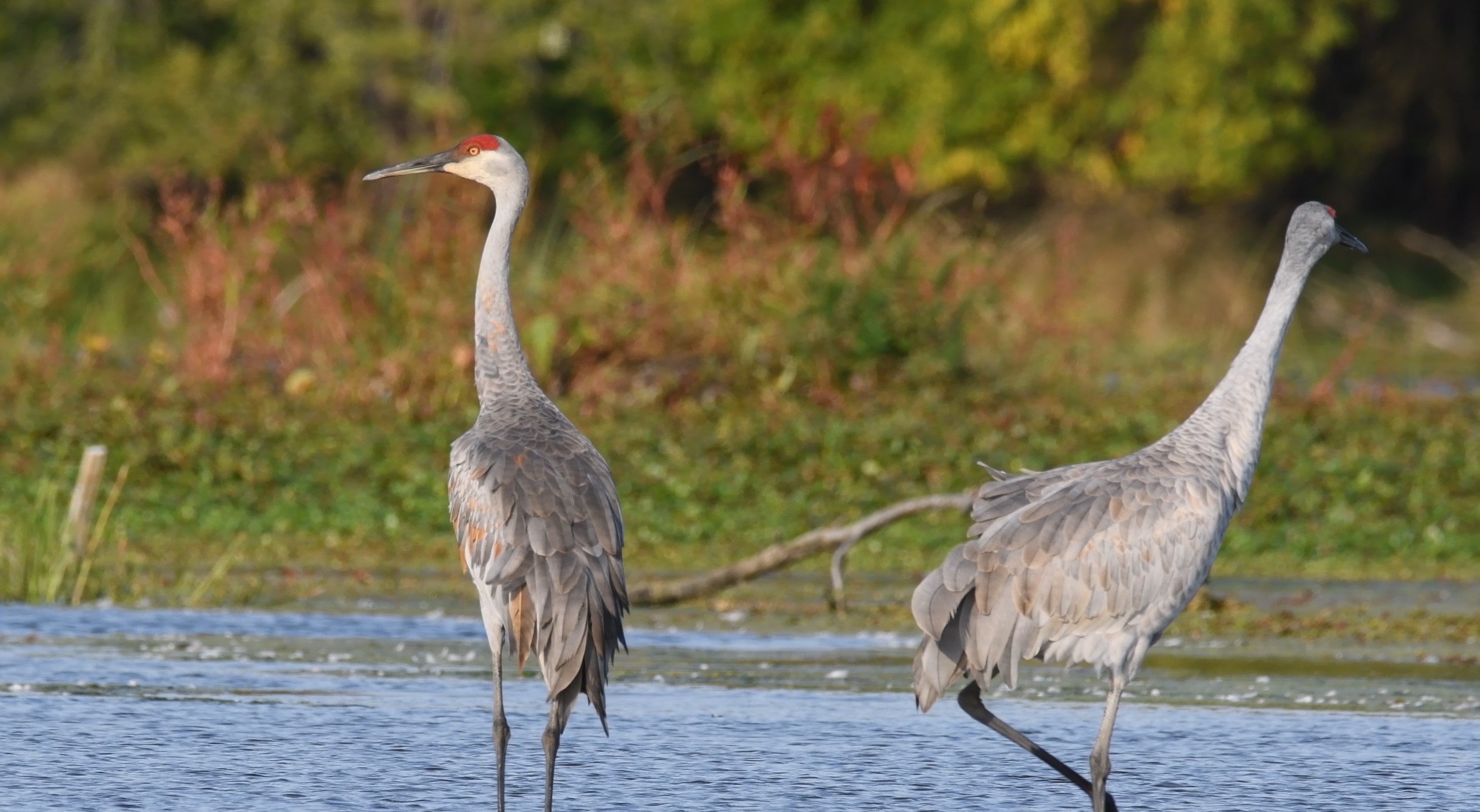 Sandhill cranes choose a mate based on their courtship dancing displays in which they bow, leap, pump their heads and stretch their wings, according to the Cornell Lab of Ornithology. Once they choose a mate, they stay together for life, although they will choose a new mate in the event that one half of the pair dies.

Sandhill crane pairs build their nest together, and the pair care for their nest together, with the males typically keeping a watchful eye on the nest as the female incubates the eggs, according to the National Wildlife Federation. Females usually lay two eggs each nesting season, but only one usually survives long enough to fledge the nest.

The mated pairs stay together all year, and in the fall, they migrate south for the winter with flocks consisting of other family groups, Cornell Lab reports. The young cranes will leave their parents to leave on their own the spring after they are born, when they are about 9 months or 10 months old. 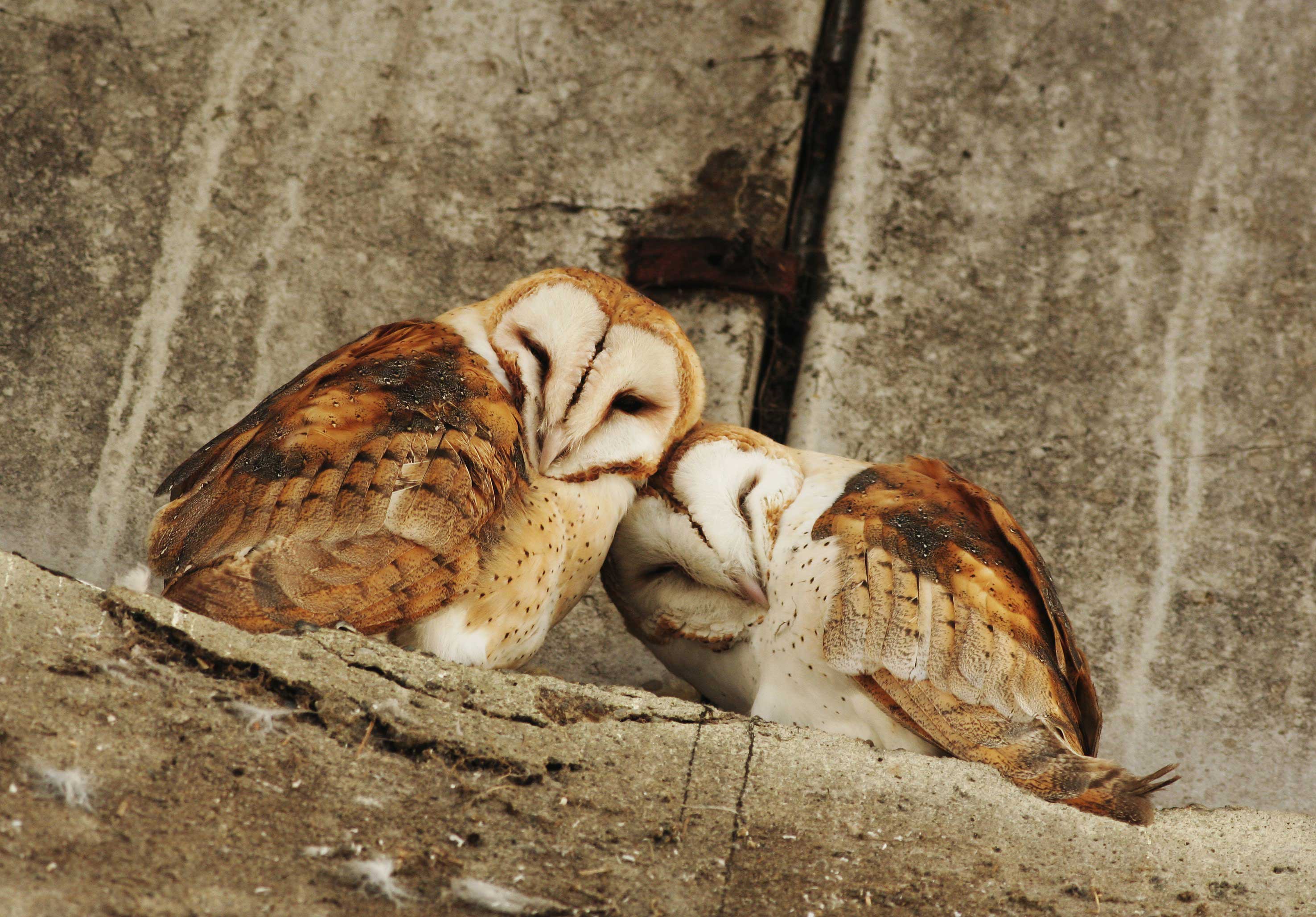 Typically, barn owls mate for life, although in some cases males are known to mate with more than one female, according to the Cornell Lab of Ornithology. Males work to attract a partner with mating flights called display flights. One mating flight used by barn owls is called the moth flight, and the male owls will hover in front of the female with his feet dangling. The males will also showcase potential nesting sites by flying in and out of them.

Once a barn owl couple has paired up, the male will begin to deliver the female prey he has hunted in preparation for her laying eggs. Barn owls nest in tree cavities, caves, burrows, crevices and human-made structures like barn lofts and nesting boxes. The female will make a crude nest from regurgitated pellets that she shreds with her talons, the Cornell Lab reports.

Barn owl chicks are cared for by their mother. The males bring food to the nest for the female and the owlets, but it’s the mother who feeds the young owls, according to the National Audubon Society. After a few weeks of caring for the babies, the female will resume hunting as well. 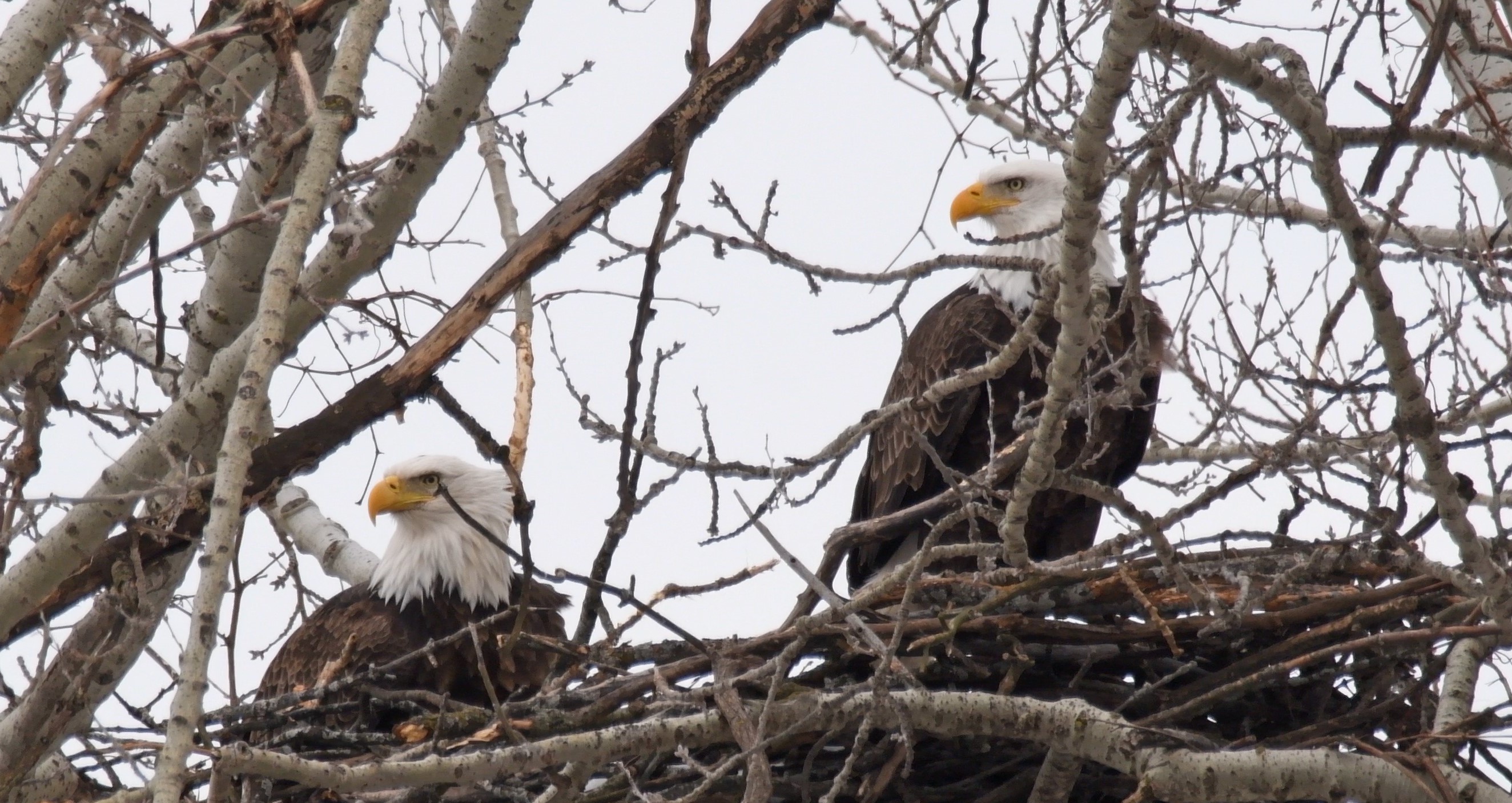 Bald eagles don’t mate until they are 4 or 5 years old, but once they select a mate they remain together for life, according to the National Eagle Center. Signs that an eagle has reached sexual maturity are their trademark all-white heads and tails.

When a male eagle has reached maturity, he will begin to look for a mate.Sometimes courtship is simple, like perching together with a female, preening or assisting in nest building. Sometimes, though, male eagles perform elaborate courtship flights or a high-speed chase to entice a female, according to Journey North.

Eagles build their nests several months before eggs are laid. They will reuse their nests year after year, but they do maintenance work to the nest each year before it’s time for the female to lay eggs, the eagle center reports. Both males and females bring material to the nest, but the female is mainly responsible for constructing it.

Among many monogamous bird species, only the female incubates the eggs, but male and female eagles share these duties, although the female generally spends more time on the nest, according to the eagle center. Once the eaglets are born, the female spends the most time caring for and feeding them, although the males also spend a lot of time around the nest. 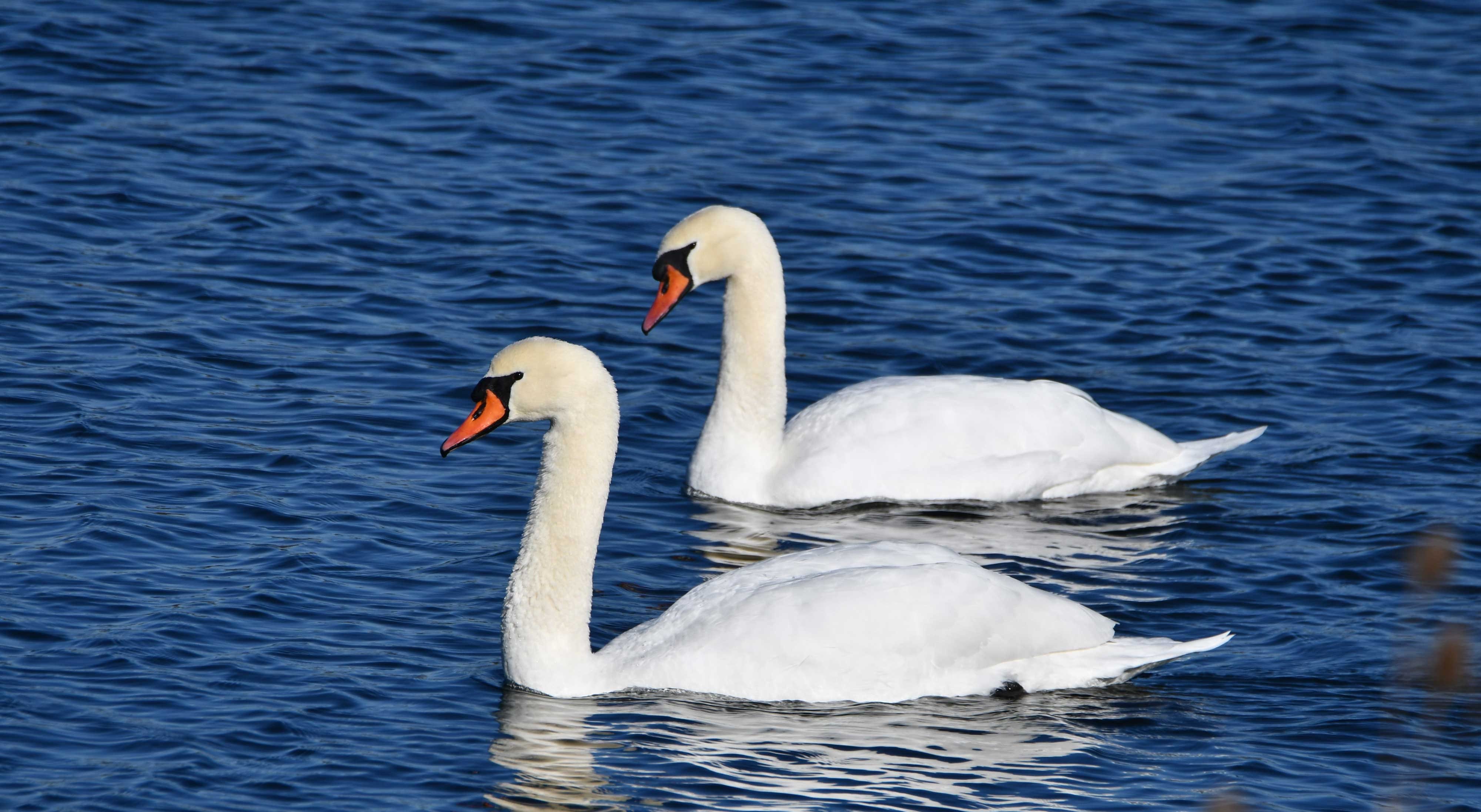 Three swan species populate our waterways — mute swans, trumpeter swans and tundra swans — and all three species most typically form long-lasting pairs. Trumpeter swans and tundra swans are monogamous and mate for life, but our most well-known swans, mute swans, are not strictly monogamous, according to Animal Diversity Web. While many swans do form long-term partnerships, some mute swans will have multiple mates or will leave one partner for another.

Among all three swan species, females and males share in the incubation duties, although the females will spend more time on their nests, according to Animal Diversity Web reports. The baby swans, called cygnets, are cared for by both their parents. Both the mother and father will bring food to the cygnets, and both will keep a watchful eye and chase off predators.

Monogamy in even the simplest sense is rare among mammals, but prairie voles, a type of rodent, take it to another level entirely. The relationship between a pair of prairie voles raising offspring is most similar to how we commonly view human partners raising children. Monogamous prairie voles share spaces and help groom each other, share the responsibility in taking care of their babies and support each other, according to Treehugger.

Before mating, male prairie voles show no preference for any particular female and actually can’t even distinguish between females, National Geographic reports. After reproducing, however, the males show a strong preference for only their mate and can recognize them by the appearance, scent and possibly even behaviors.

Female voles expect their male partners to help in rearing their young, and if they don’t the female will physically pull the male by the neck back to their shared home, Smithsonian Magazine reports. And when one half of a mated pair of prairie voles dies, its surviving partner grieves its loss.