The Sages of McKinley Woods

This is one family's story of what life was like living in the old Civilian Conservation Corps barracks in the late 1950s.

Editor’s note: In response to the story "McKinley Woods World War II Connection," the Forest Preserve received an e-mail from Luann Sage Nash, which read in part: “We lived in one of the old [Civilian Conservation Corp] camp homes (at McKinley) till 1973 when my father, Arthur Olin Sage, Custodian of the Will County Forest Preserve, retired at the age of 75.”  We talked to Mrs. Nash, and this is what we learned.

The barracks at McKinley Woods had stood empty for more than a decade. They had once housed hundreds of workers, part of a huge national army, the Civilian Conservation Corps (CCC). Corps members were employed by the federal government to combat the Great Depression by construction improvements to America’s vast parklands. By 1942, the program had ended, but the buildings that housed the workers remained at McKinley.

In 1957 Arthur Olin Sage, who was a farmer in Channahon, was hired by the Forest Preserve District of Will County’s Superintendent John Jevitz to serve as custodian of McKinley Woods. He was also deputized as a Will County sheriff’s police officer in order to deal with any situations that might arise in the preserve. He was paid, his daughter Luann Sage Nash recalls, $60 a week, and the family would be provided housing in one of the CCC barracks.

Arthur and Lucille Sage had seven children. Two sisters had married and settled elsewhere, so five of them – Don, Marilyn, Arthur Jr., Nancy and Luann – moved into the wooden building with their parents. At age 3, Luann was the youngest, her sisters were ages 7 and 14, and brothers, 10 and 17. 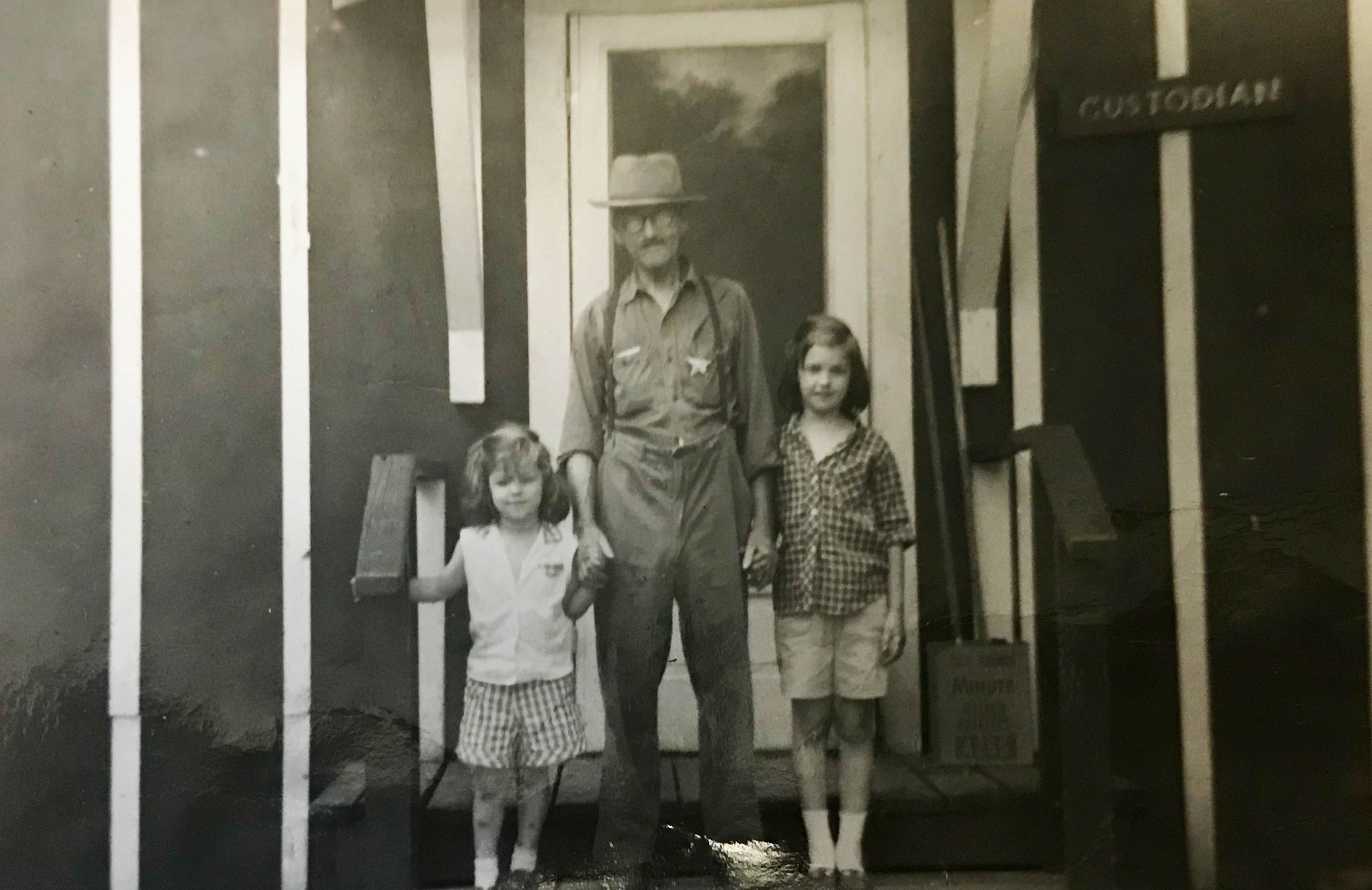 The accommodations were sparse. The family lived in the front part of the barracks. The front door opened to the kitchen and behind that was the family living room. A hallway led to rooms on both sides. These served as the bedrooms for the parents and girls. The boys slept in the living room.

A large room in the back of the barracks and several rooms connected to this large room had deteriorated over the years and were locked off.

In the kitchen, cooking was done, at first, on a coal stove. Some years later, the Forest Preserve installed a propane gas stove. A second coal-heated stove warmed the living room. The family had a television – though reception was often interfered with by the location of the building, situated at the bottom of a steep hill, and by traffic moving outside the preserve.

The building had running cold water only. Hot water required heating it on the stove.

Luann was aware, even as a young girl, that her father was supplied with very little to perform his day-by-day duties, like grass cutting and painting. Arthur Sage brought many of the tools he used from his farm. Eventually, the Forest Preserve provided him with a mower, but, Luann said, even it was used and well past its prime. It left such a narrow cut that she is still amazed that her father was able to mow so much land with it. 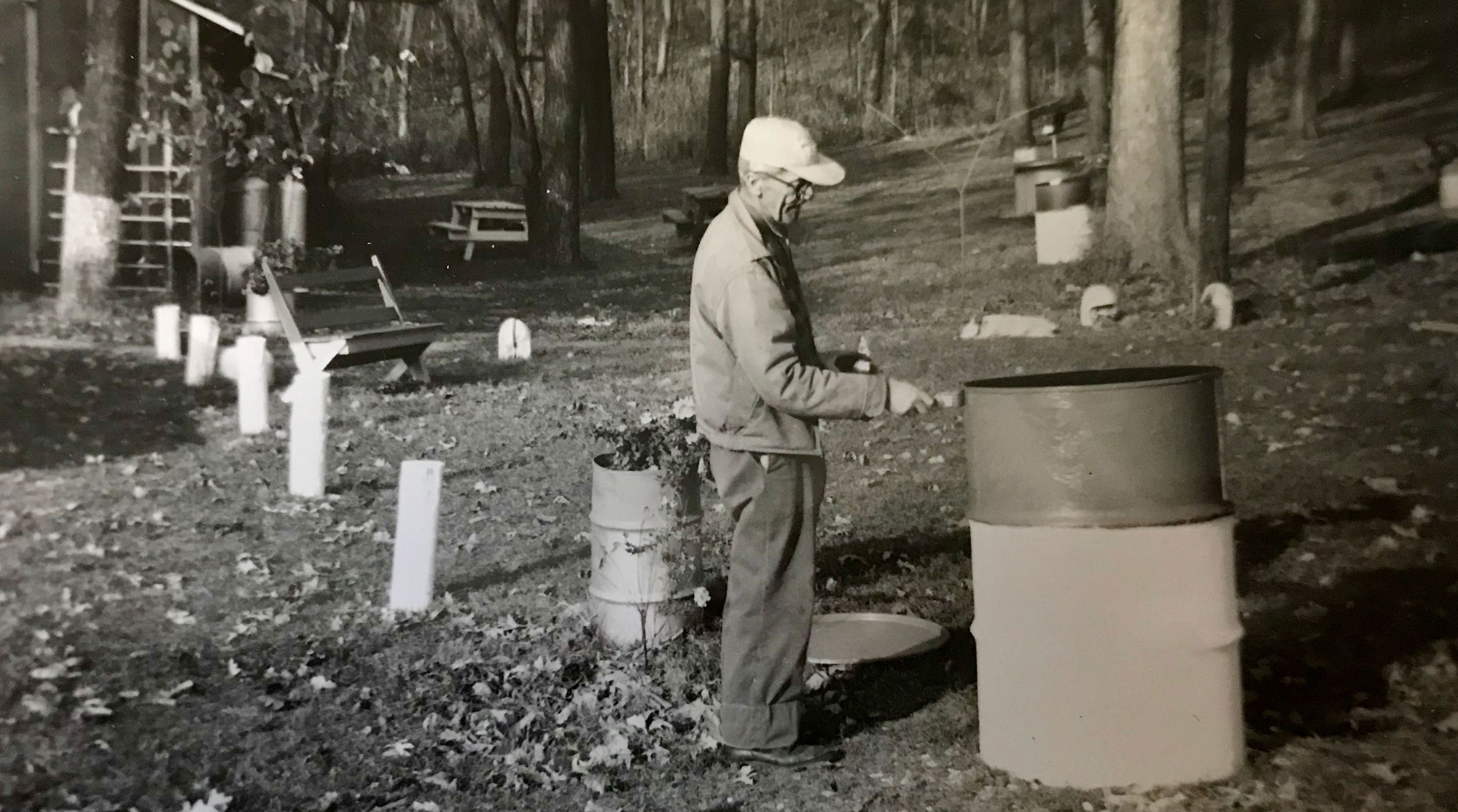 Arthur Olin Sage, custodian of McKinley Woods from 1957 until 1973, painting an oil drum used as garbage receptacles in the preserve. (Nov. 1963)

The children had to pitch in when needed. Luann remembers that when her father would declare that the family was “going into town” on wintry days, the kids had to scatter cinders on the long, steep road in order for their car to get traction up the hill.

The most terrifying experience the family faced at McKinley Woods occurred in the early morning hours when Luann was just four years old. She needed to go to the bathroom, and when she stepped out into the hall, she froze in her tracks. One of the walls was on fire, she told her sister when she urgently awoke her. They discovered it was not the wall but the neighboring building that was ablaze.

Luann vividly remembers fire trucks arriving to fight fires to several of the buildings. This was an act of arson, and although there were suspicions as to who set the fires, no one, to Luann’s knowledge, was ever arrested for the crime. (The only reference to this fire in the minutes of the Forest Preserve District of Will County Board of Commissioners’ meeting for December 18, 1958, was the following: “Moved by Commissioner Liberty and seconded by Commissioner Meyer that the board allow the Channahon Fire Department the sum of Fifty ($50.00) and the Minooka Fire Department the sum of Twenty-Five ($25.00) for services rendered at the McKinley Woods fire August 15, 1958.”)

Despite the austere living conditions, fond childhood memories remain. In the winter, the nearby I&M Canal Tow Path would overflow and create a frozen pond, what Arthur Sage called a “bayou.” This the children would use to ice skate, having their own private pond. These memories were of particular pleasure to Luann because, “You know, we kids did not have much to do for fun.”

She also recalls that once or twice a year, a church picnic was held at McKinley Woods. “We loved the ice cream and soda,” she remembers. These were rare, special treats for the children. 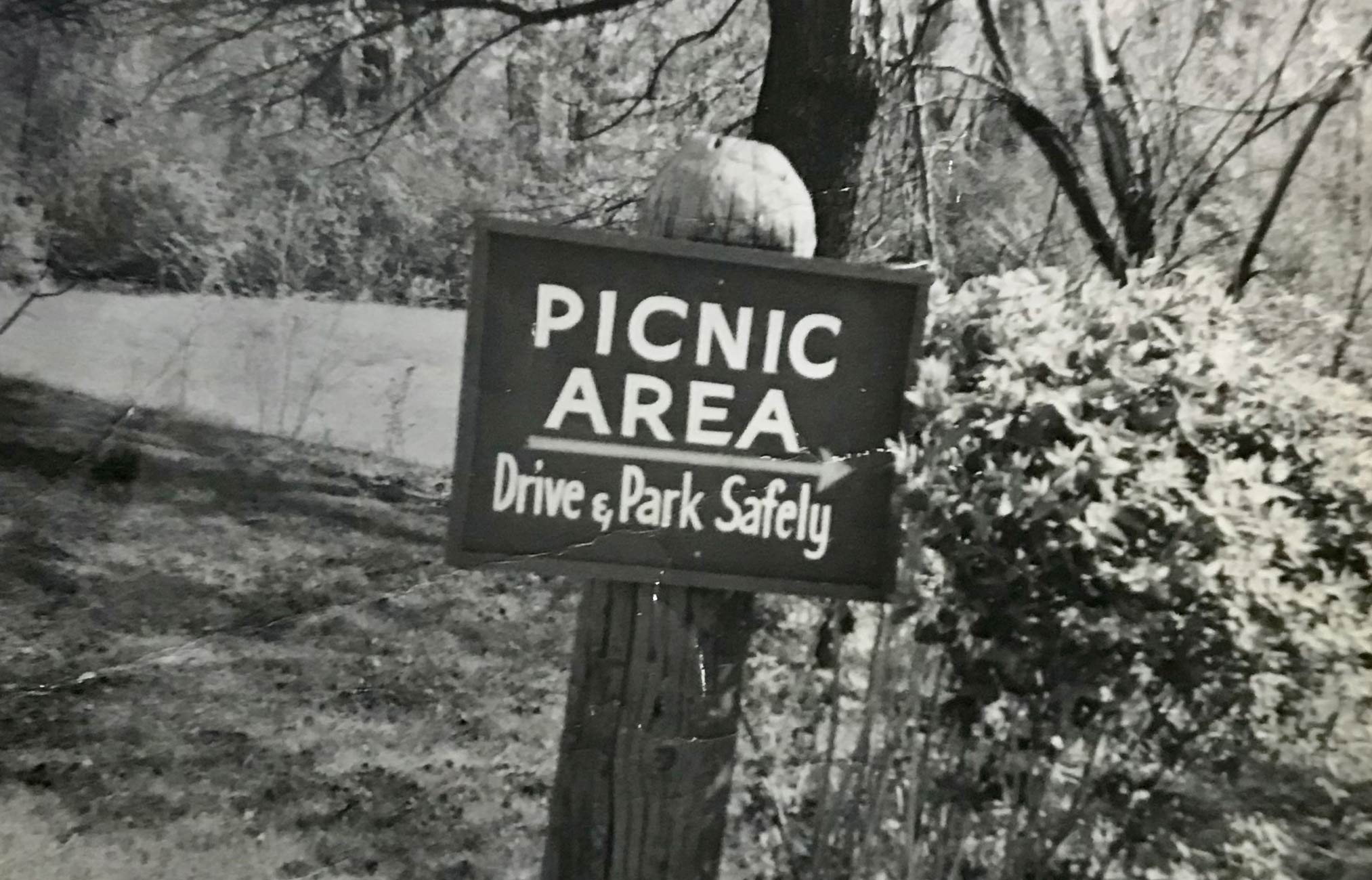 But there were also other darker moments. Luann tells how her father was on the roof of the building cleaning out the chimney, because, Luann says, the danger of “fire was always a concern,” the dry wooden building a potential tinderbox. The roof collapsed beneath Arthur and he fell to the floor below. He was hospitalized and would suffer back pain the rest of his life.

A more gruesome incident occurred when Arthur was operating a saw, making picnic tables. The saw slipped in his hand, slicing all four fingers. Doctors were able to save the fingers, but Luann’s father’s hand was never the same.

In those days, not many people visited McKinley Woods even though the preserve was open to the public. They encountered visitors only infrequently. But Luann does remember that motorcycle gangs would come down from Chicago to party in the preserve. Arthur Sage would approach these groups to talk with the visitors, reminding them of park rules and closing time.

In 1973, Sage retired at the age of 75. By this time, Luann, both brothers and one sister had married and moved away. The Sages vacated their home of 16 years, and Arthur, Lucille and sister Nancy moved to Shorewood.

Her family’s experience of growing up in a monument to the past, a simple, wooden barrack that once housed men who were part of an epic effort to lift the country out of the worst economic crisis it had ever known, stands as a singular story in the history of the Forest Preserve District 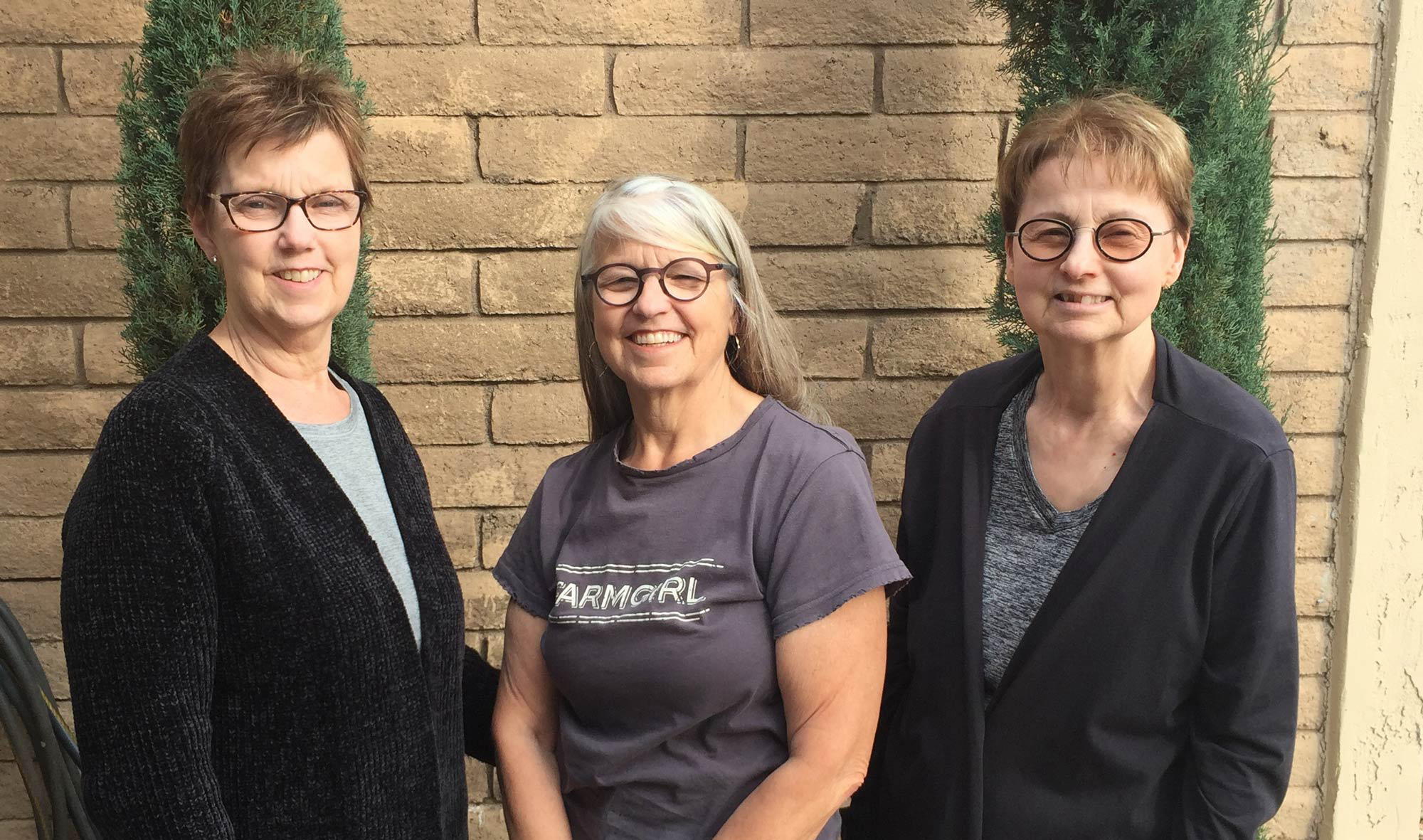 The Sage sisters today (from left): Nancy, Luann and Marilyn.