The problem with plastic

The throw-away era: We're living in the age of plastic, and we're only beginning to understand the consequences

It’s hard to imagine a world without plastic, but the problem with plastic is that we don’t fully understand how it affects us and the world around us.

In the grand scheme of humanity, plastic is a very new phenomenon. Its use increased dramatically after World War II, when improvements in manufacturing made it much cheaper and easier to produce, the BBC reports. And what’s not to love about plastic? It’s cheap, lightweight, durable, waterproof and can be used to make almost anything we can think of.

It probably feels like hyperbole to say that plastic changed the world, but it truly did. Food is safer because it can be wrapped in plastic, preventing transmission of food-borne illnesses. Plastic products can be used to insulate and seal our homes and buildings, making them more energy efficient. Even medicine today is improved by plastic because many commonly used items like syringes are more accessible and affordable when made with plastic. And this is just the tip of the plastic iceberg when it comes to how this material has shaped society. 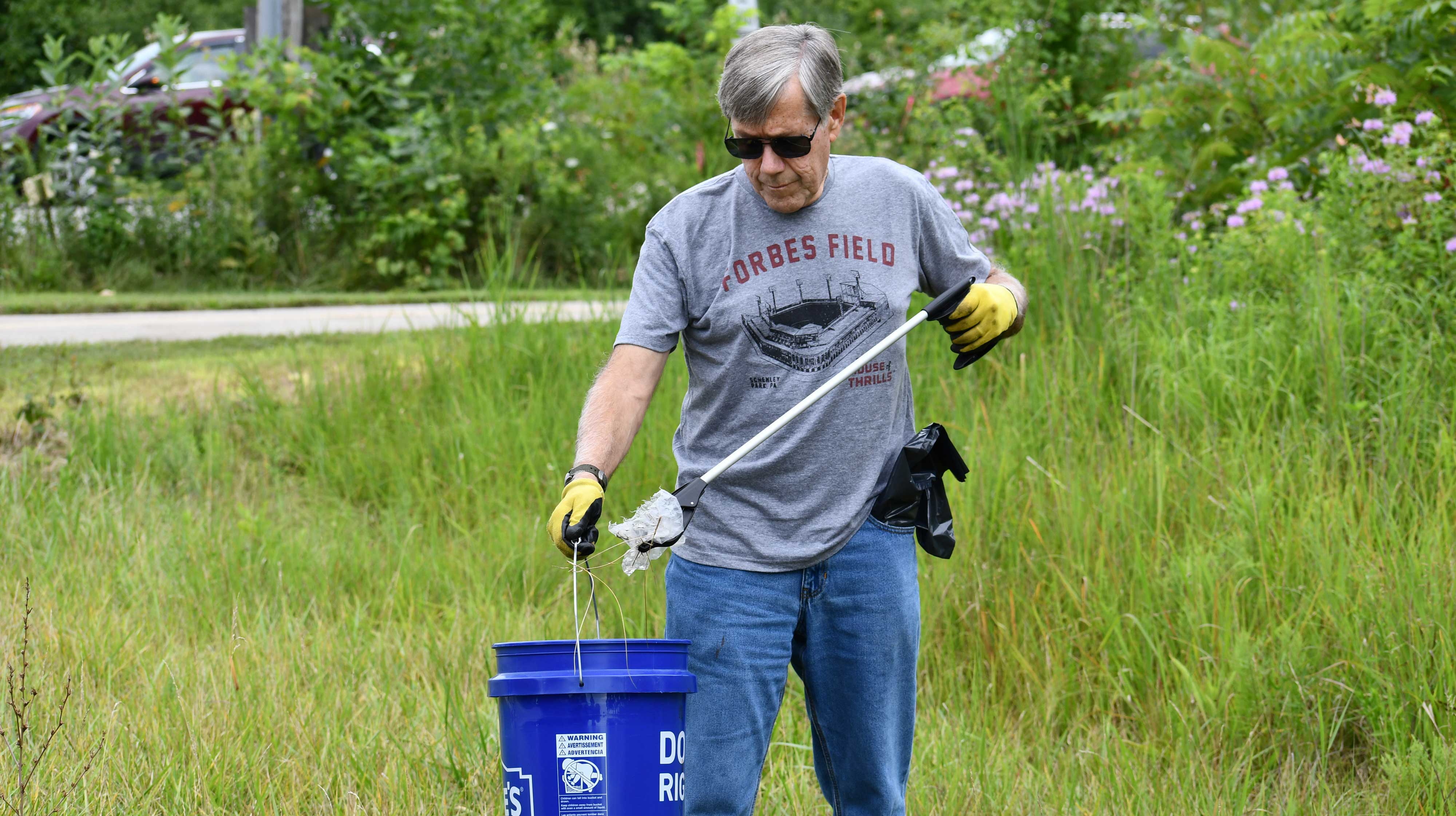 What are we doing with all that plastic? Plenty. Your everyday life is probably filled with plastic. The pint of blueberries and gallon of milk you bought at the grocery store were packed in plastic. Your laundry detergent and toilet bowl cleaner come in plastic containers. And all of these items are intended to be used just once and thrown away.

In fact, about 40% of the plastic produced today is for single-use plastics, according to National Geographic. While some of these single-use items are critically important, such as surgical gloves, many are not. Think about your last stop for iced coffee. Did in come in a plastic cup? With a plastic straw? Or your last take-out meal. Did it include plastic utensils wrapped in plastic? And plastic food containers?

Where do all these plastic items go when we are done with them? Ideally, they are recycled or otherwise properly disposed of, but we know that’s not always the case because of the plastic litter we see almost everywhere. 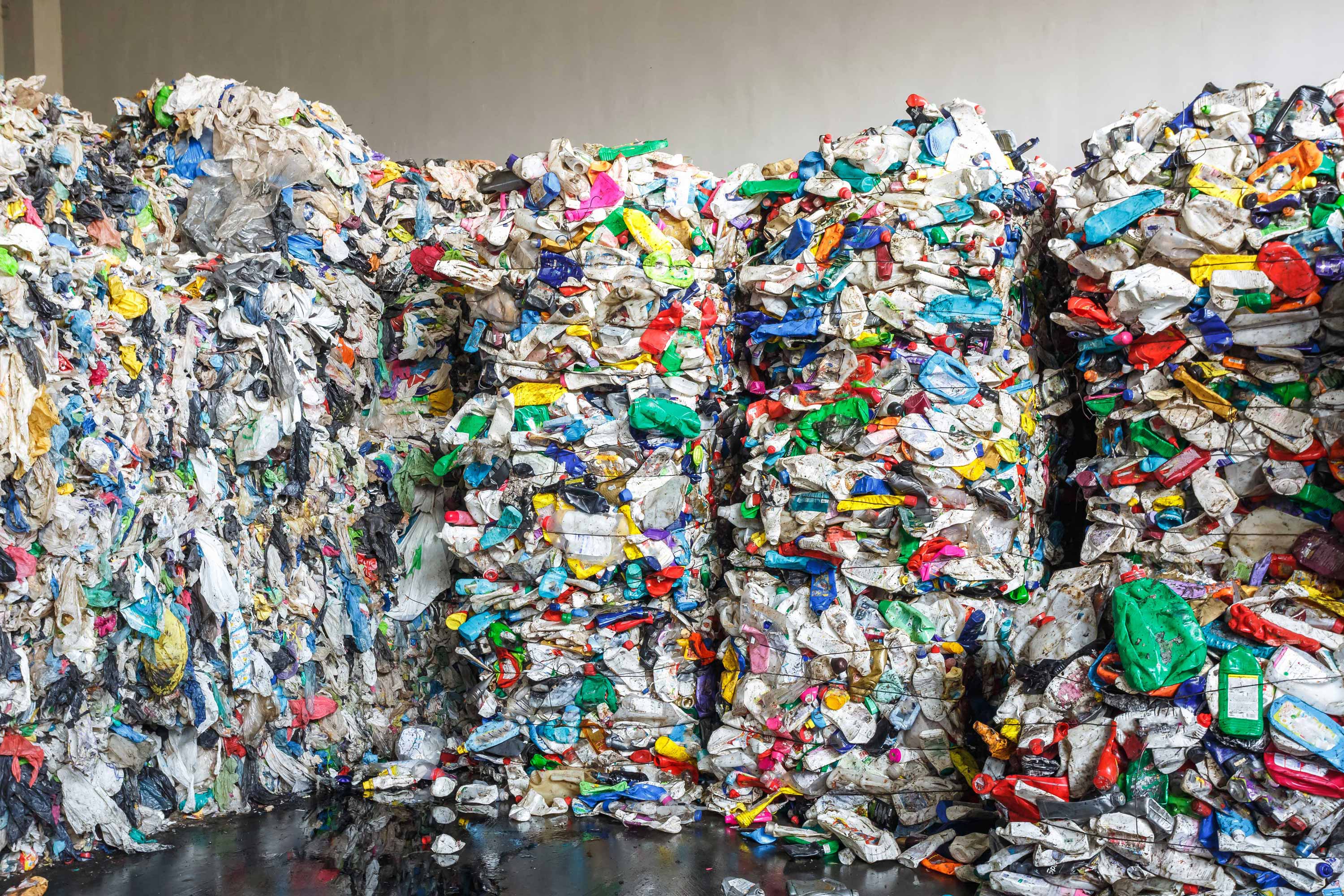 The myth of plastic recycling

And even when you do the responsible thing and put all your plastic bottles and jugs into your recycling bin, it very likely isn’t going where you think it is. Only about 20% of all plastic worldwide is recycled. In the United States, it’s even worse; only 9% of plastic is recycled, National Geographic reports.

Until a few years ago, much of the plastic recycled in the United States was shipped to China, to the tune of about 700,000 tons a year, NPR reports. We weren’t alone in the endeavor, with about 7 million tons of plastic shipped to China a year from all over the world. But China doesn’t want to be a dumping ground for the world’s plastics anymore. In 2018 the country stopped accepting shipment of plastics because it was polluting its land and waterways and much of it was too expensive to recycle. Now people are continuing to recycle plastic, but there’s nowhere for it to go except our landfills.

Recycling plastic isn’t as easy as many people think because many plastic products are made from more than one kind of plastic as well as other chemicals, and the components cannot be separated to be recycled, according to Consumer Reports. In addition, a lot of plastic is contaminated with food waste and other residue, adding to the cost and reducing the efficiency of recycling efforts.

So if it isn’t recycled, where does it go? About 76% of plastic trash in the United States winds up in landfills, and an additional 16% is burned at very high temperatures, according to Consumer Reports. One percent of plastic ends up as litter in our oceans. 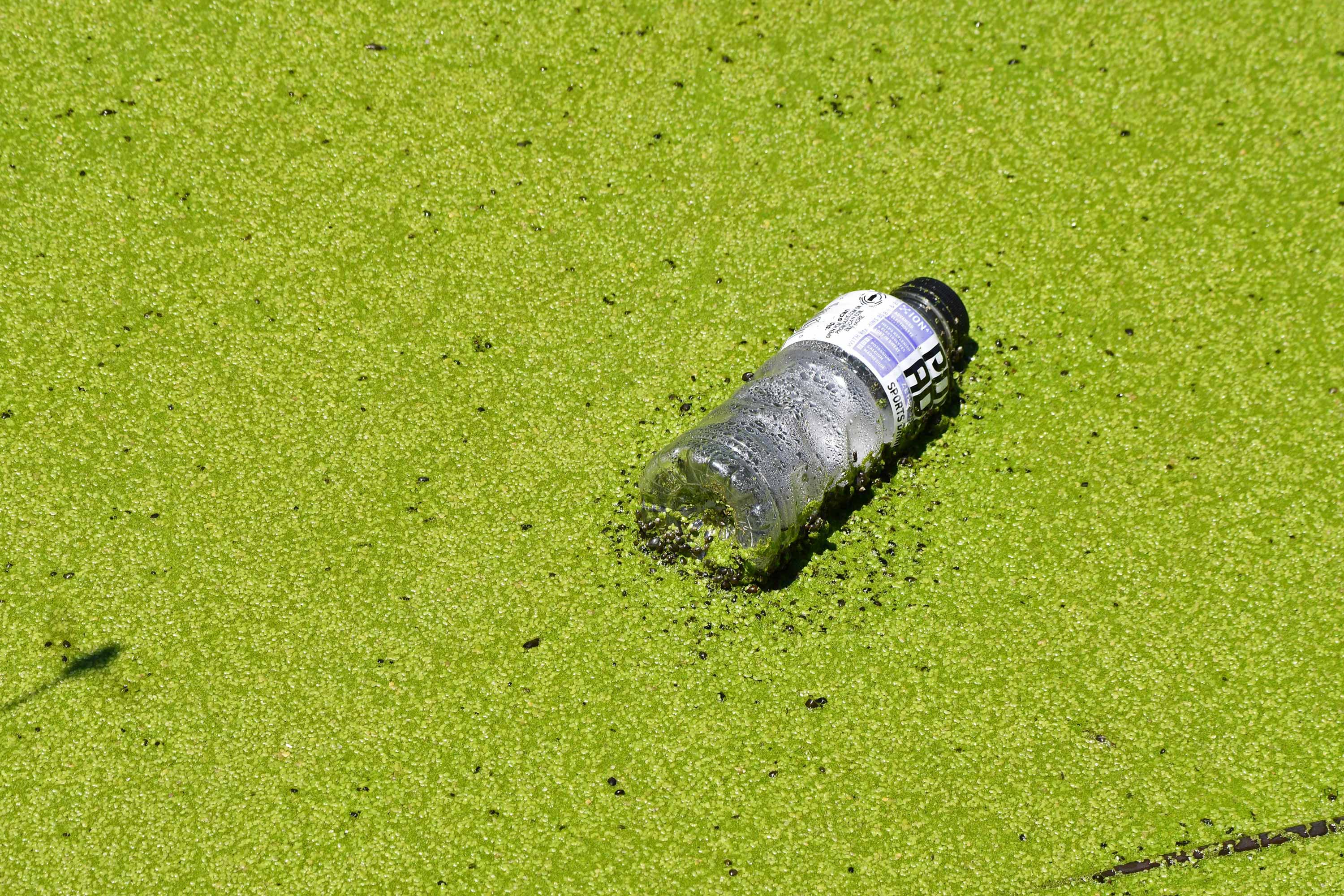 Plastic will always be plastic

All the plastic that isn’t burned — whether it makes its way to a landfill or enters the stormwater system and eventually makes it way to a local river and then all the way to the ocean — will change shape and form over time, but plastic will always be plastic because it doesn’t decompose, at least not for hundreds of years at best. In fact, virtually all the plastic that has ever been created still exists, EarthDay.org reports.

Instead of decomposing as other garbage does, as plastic is exposed to the elements on land or in water, it breaks down into smaller and smaller and still smaller pieces, according to the National Oceanic Atmospheric Administration.

These small plastic pieces, called microplastics, are everywhere. They have been found in every corner of Earth, even in the remotest of places mostly free from human interference. Microplastics have been found deep in the oceans and in the dust that is moved from place to place by wind, National Geographic reports.

Both on land and in our oceans, plastic litter is a big problem. Bigger pieces of plastic waste — cups, bottles, wrappers and the like — are unsightly, but the problem with plastic doesn’t end when the litter no longer mars the landscape. Microplastics — technically defined as pieces of plastic that are smaller than 5 millimeters — continue to pose problems long after they’ve become too small to see. In fact, these tiny plastic pieces are even in our drinking water and many of the foods we eat. 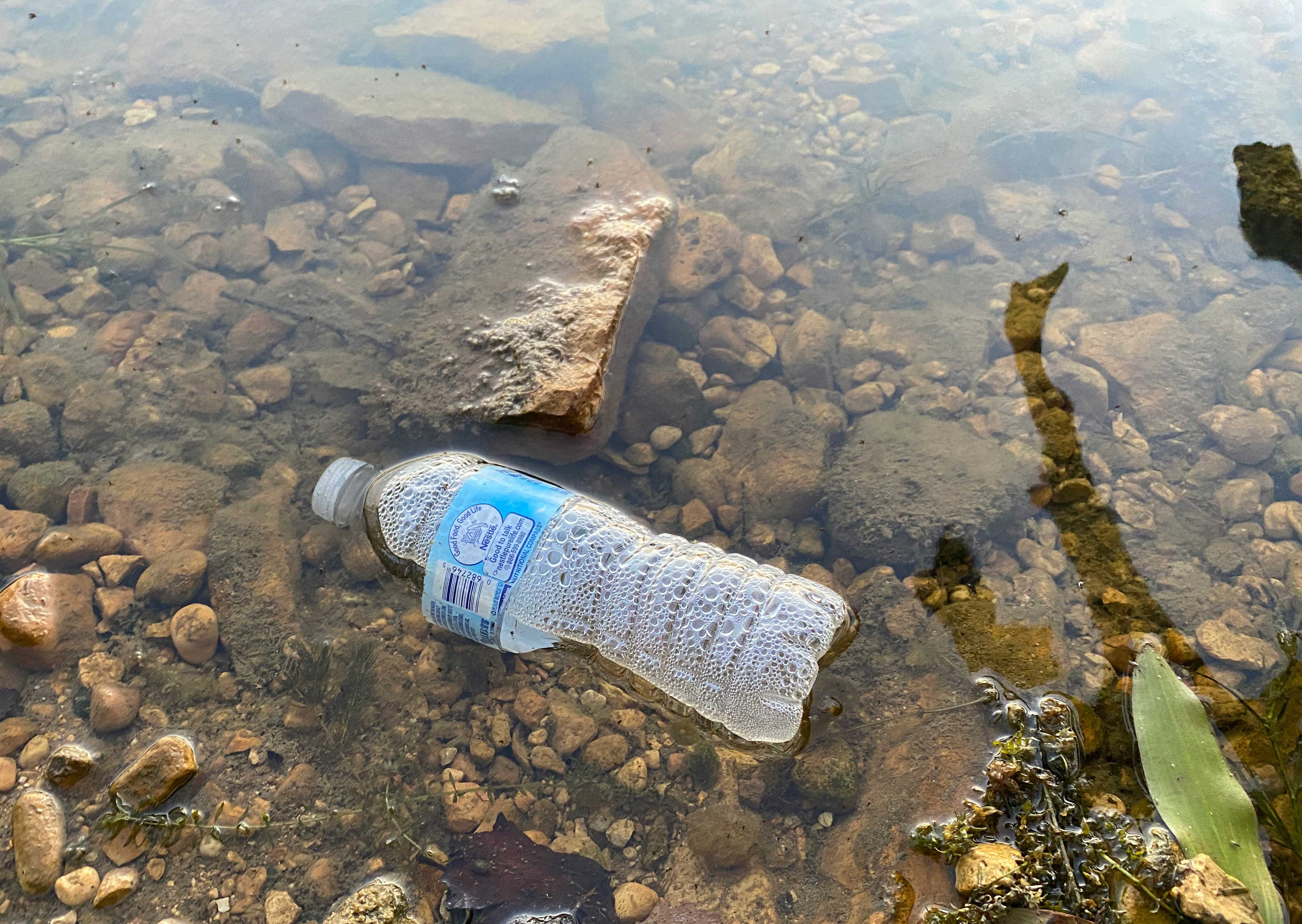 The plastic we eat

Plastic is so pervasive and prevalent in our world that we are full of it too. That’s right — those tiny microplastics are in our bodies. Tens of thousands of them, in fact.

So what’s the problem with consuming plastic? No one really knows. Remember, the prevalence of plastic is still a relatively new problem, and although research is being done to determine its effects on human health, it is still mostly unknown.

Over time, ingesting plastic could be toxic to humans, but scientists don’t know how much our bodies can tolerate without ill effects, National Geographic reports. Negative effects could be possible at certain levels because some kinds of plastic are made with chemicals like chlorine and others can pick up toxic chemicals from the environment as they pass through it. 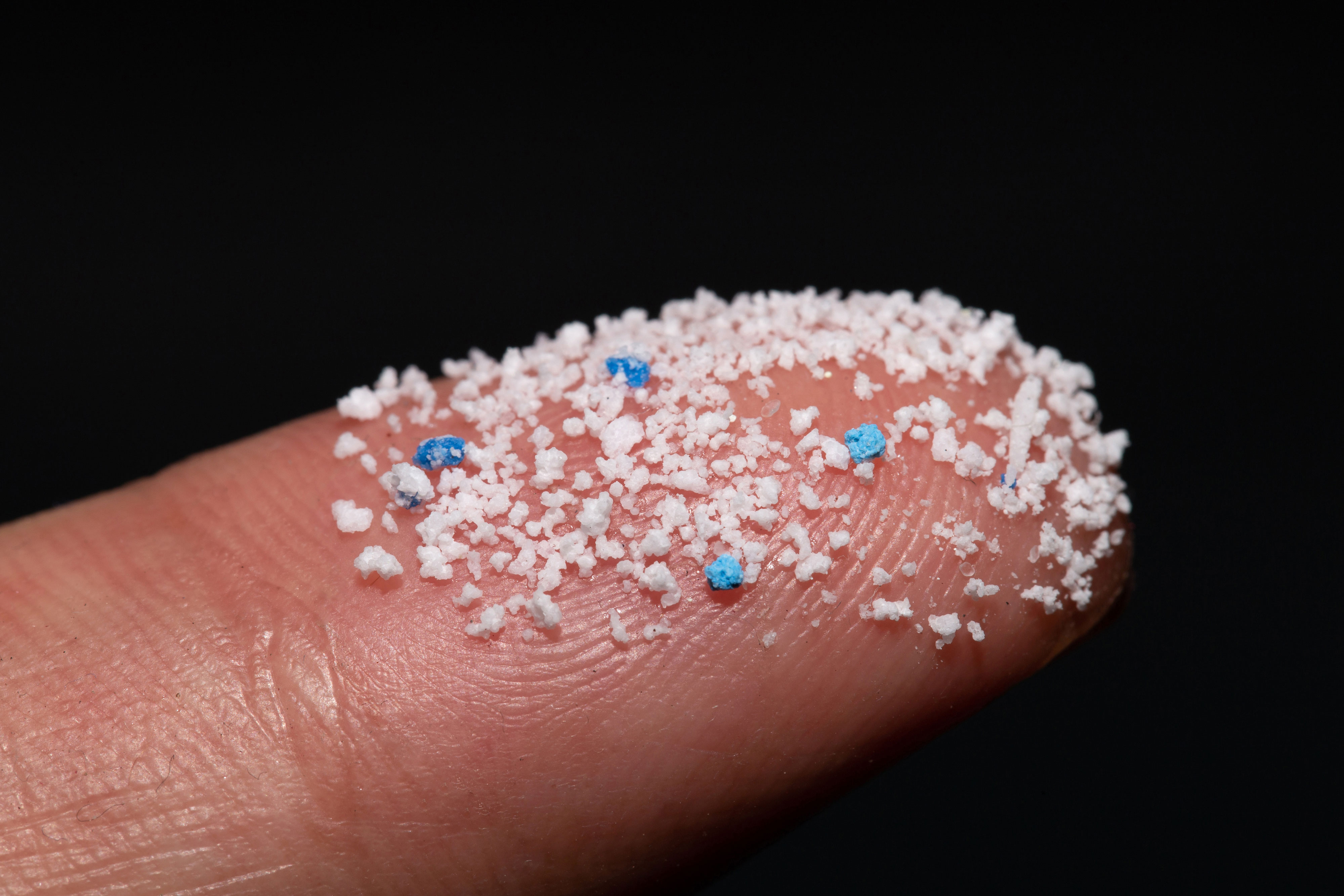 Where we go from here

Our consumption of plastic — both literal and figurative — shows no signs of slowing. Quite the opposite, actually, if you recall that plastic production is expected to quadruple by 2050. But if the first step to solving a problem is, as they say, admitting you have a problem, we may be heading in the right direction.

In many circles, there’s no debate that humans are using too much plastic. To that end, many of the most prolific plastic items have been banned in some areas. Take plastic shopping bags. Americans use about 100 billion of these bags a year, according to the Center for Biological Diversity. However, their use has been banned in several cities and states, including California, Connecticut, Delaware, Hawaii, Maine, New York, Oregon and Vermont. Here in Illinois, the bags are still commonplace, but you can do your part to reduce their use by keeping reusable bags in your car.

Another everyday item that’s been the subject of bans is plastic straws. Several cities, including Seattle and Washington, D.C., have banned their use, and several corporations have changed their cup design so straws are no longer needed. Take Starbucks, which rolled out cups with strawless lids in 2020 to help reduce the use of plastic straws. Dunkin’ unveiled a strawless lid in 2021 and is also testing biodegradable straws in some markets. You can contribute to the cause by passing on taking a straw with your drink when dining out or getting takeout. Love drinking with a straw? There are plenty of reusable straws on the market, including silicone and stainless steel options.

These steps — both individual efforts and large-scale actions like legislative bans and corporate initiatives — put us on the right path, but based on the amount of plastic produced each year it’s not enough to stem the tide. To truly make measurable progress in ridding the environment of plastic, we have to do a better job of recycling it and using less of it. Both these steps require individual action — things you can do in your own life — and large-scale efforts by governments, industries and corporations.

If we don’t, our natural areas, particularly our oceans and other waterways, will become increasingly filled with plastic. Already, it’s estimated that the world’s oceans will be filled with more plastic than fish by 2050, the World Economic Forum reports. Is that the future we want for the next generations?