The plight of the bumble bee

One of our most important — and fuzziest — insects is facing steep population declines, putting their very survival at risk.

Bumble bees, those big and bumbling bees that seem so much less threatening than other stinging insects, are critical pollinators, buzzing from flower to flower to feed on nectar and pollen. All that eating by the bees creates an unintended — but enormously useful — consequence: pollination, according to the U.S Forest Service.

Bumble bees pollinate the wildflowers in your yard and neighborhood parks and gardens, but also many agricultural crops, including tomatoes, squash, berries and alfalfa. All told, more than 80 percent of the flowering plants across the globe require a pollinator for reproduction, according to the U.S. Department of Agriculture. In fact, one in every three bites of food is made possible by pollinators. And the most important pollinator in the world? Bees.

Unlike honey bees, bumble bees are native to the United States, one of several types of bees native to our continent along with carpenter bees, leafcutter bees, mason bees, mining bees and plasterer bees, according to the Illinois Department of Natural Resources.

Like many other pollinators, native bee populations are on the decline across much of their range, IDNR reports. In the case of bumble bees, they are much less populous than they used to be. In fact, you’re almost 50 percent less likely to see a bumble bee today in any given place in North America than you were before 1974, according to a study published in Science.

Researchers believe bumble bee populations are in danger because of climate change, according to a study published in Science. As temperature and precipitation patterns change, many bumble bee species could be at increased risk of extinction.

One reason for this is because bees are better equipped for cooler weather. Because they can generate heat while flying and are protected and insulated by the fuzzy hairs covering their bodies, bumble bees are typically one of the first insects seen each spring, National Geographic reports.

As Earth gets warmer, bumble bees are increasingly susceptible, according to the Science study. In warmer weather, bumble bees can overheat, and climate change also affects the plants they rely on for their food supply.

However, climate change isn’t the only factor having a negative effect on these bees. Other drivers in the downward population trend of bumble bees include the use of pesticides like neonicotinoids, which are toxic to all bees, as well as habitat loss, pathogens and the release of non-native bees to aid in commercial pollination, National Geographic reports.

In the case of bumble bees, their work as pollinators makes them especially crucial. Read on to what makes these fuzzy bees so special and what you can do to help ensure they are here for good. 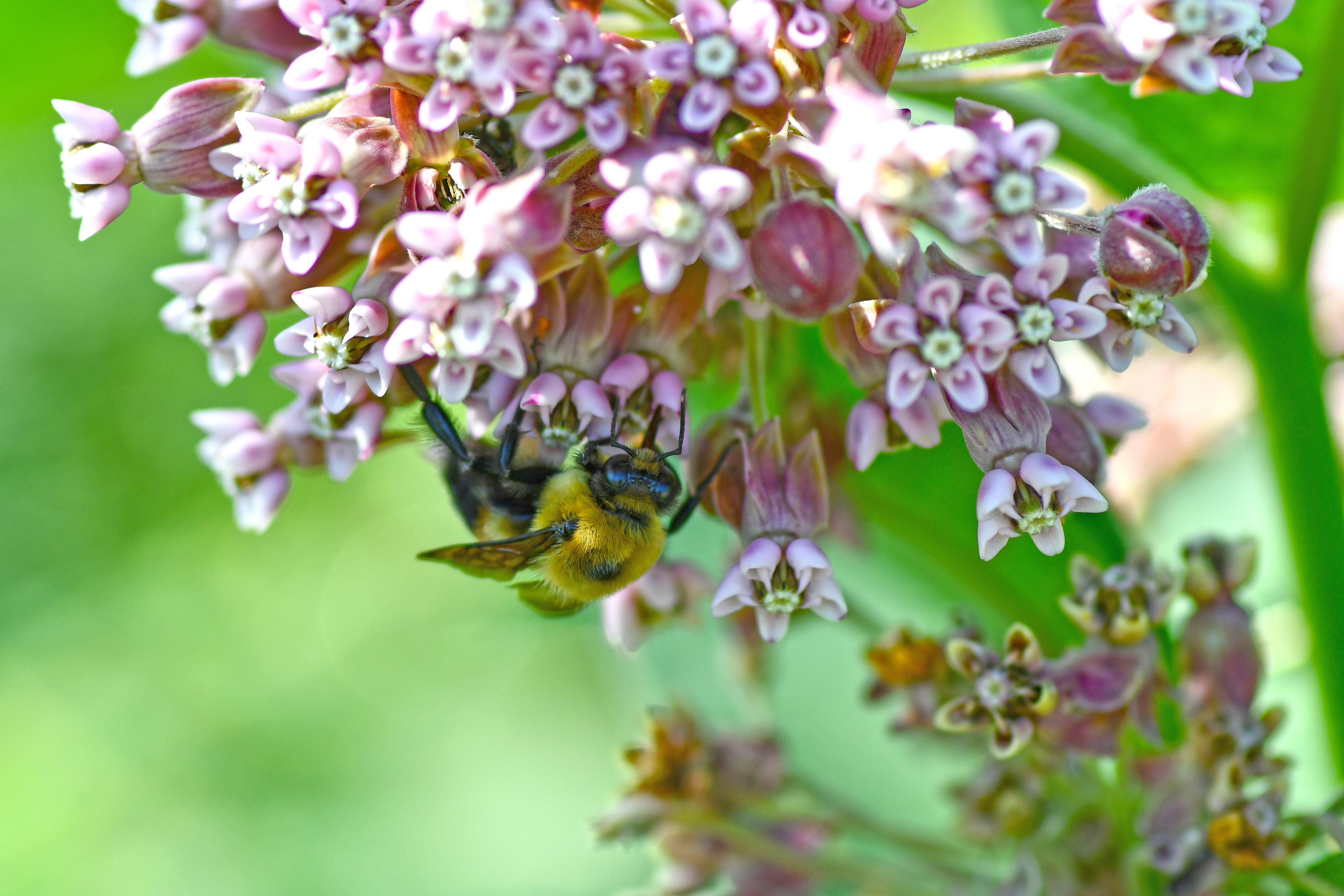 Honey bees get all the buzz for their work pollinating plants, including important crops that are a part of our food supply. But bumble bees are important pollinators too, and they have some pollinating powers that are unique to them. One such behavior is sonicating, or buzz pollination, which is essentially a certain kind of buzzing that some plants require for them to be pollinated, according to the U.S. Forest Service. These plants, which include tomatoes, cranberries and some related plants, don’t produce nectar, but bumble bees still visit them for pollen. To collect the pollen from these plants, the bumble bees vibrate their wing muscles to shake out the grains of pollen.

Because bumble bees have longer tongues and different wing-vibrating abilities, they are more efficient and effective pollinators of some plants than bees such as honey bees, Clemson University reports.

Even the fuzzy nature of bumble bees is a boon to their pollinating power. All those hairs covering their bodies make it easier for pollen to stick to them, according to the University of Wisconsin. Plus, bumble bees are able to fly in colder and wetter weather than other bees, both because those hairs help insulate them and because they have the ability to shiver to raise their body temperature. This shivering ability allows them to fly when it’s too cold for many other insects to take to the air. 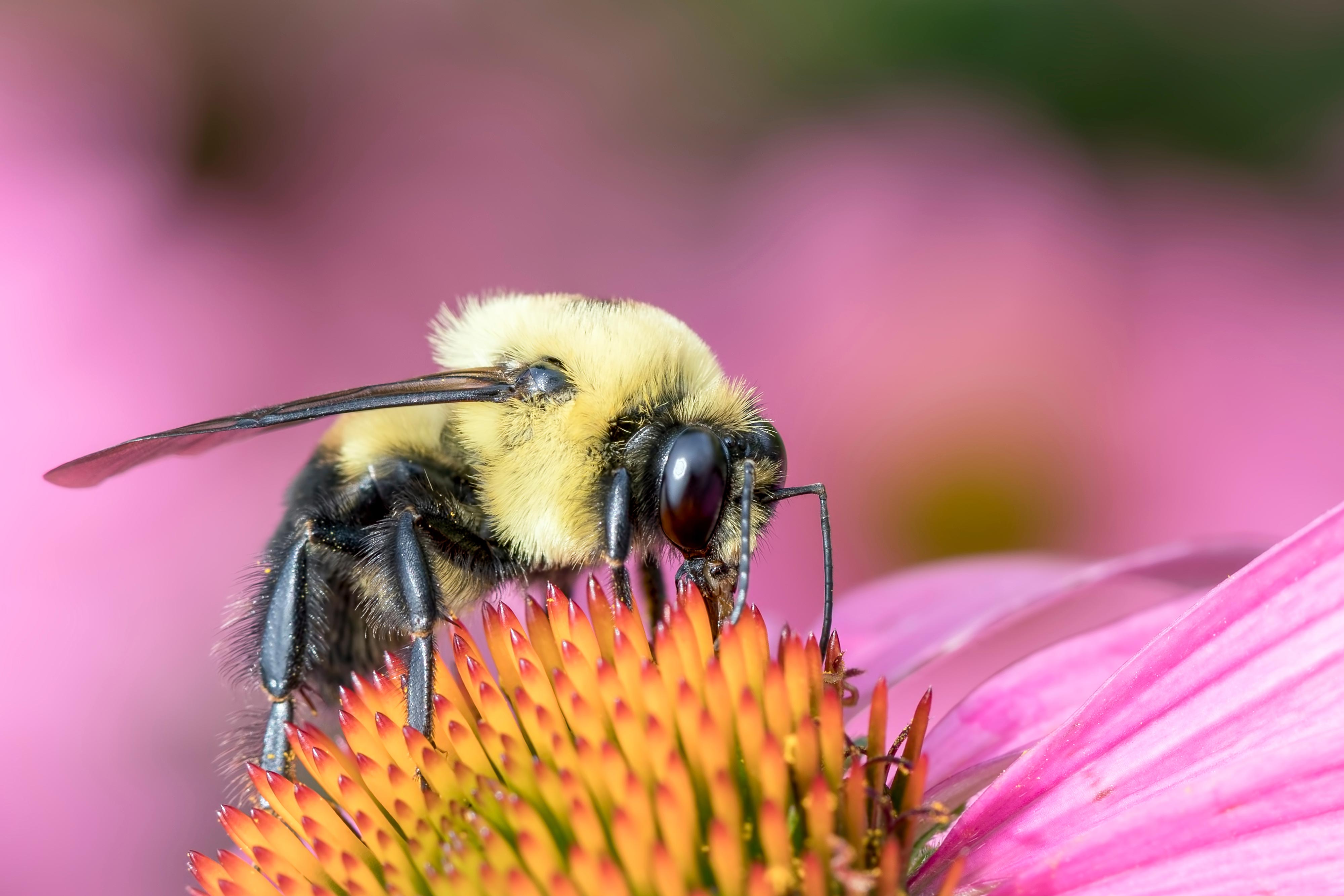 They are social creatures

Most native bees — carpenter bees, sweat bees, mason bees, leafcutter bees, mining bees and more — are solitary creatures, coming together with other bees only to reproduce, but bumble bees are a notable exception to this. Bumble bees are social, living in colonies, according to the Xerces Society.

Like honey bees, the bees in bumble bee colonies have different jobs, and their generations typically overlap during spring, summer and fall. Each colony is led by a female queen, and the other bees are worker bees with different jobs to perform to maintain the hive. Most bumble bee colonies are underground, often in abandoned rodent holes, although they will also nest in tree cavities and abandoned nests, the Xerces Society reports. They can house anywhere from 50 to 500 bees.

In the fall, all the bees except the young queens die off. The queens will dig holes just beneath Earth’s surface and overwinter there, emerging in the late winter or early spring and laying eggs to restart the life cycle, according to the Xerces Society.

They need our help

Because bumble bees seem to be particularly endangered by extreme and rising temperatures, they would benefit from an effort to increase green spaces in urban areas, National Geographic reports. This would give them a place to get away from the heat and also provide feeding and nesting grounds.

While this kind of effort requires planning at a higher level, there are things you can do on your own property to help bumble bees. One easy way is by planting native plants that the bees can feed on, National Geographic reports. You can make your garden most useful to bees and other insects by incorporating plants with varying bloom times, ranging from spring to fall, to ensure a steady food source all throughout the growing season. Even letting dandelions remain in your lawn will provide a good early-season food source for bees and other pollinators.

Bumble bees will also benefit if you eliminate the use of chemicals such as herbicides and insecticides in your yard, the National Wildlife Federation advises. Neonicotinoids, a type of insecticide, are particularly insidious because these chemicals are taken up by plants’ vascular systems, meaning bees and other insects are exposed to them when they feed on the nectar and pollen even long after they were applied to the plants.

Finally, keep in mind that bumble bee queens overwinter just below the ground. If you can avoid mowing, raking or tilling your yard until April or May, you’ll help ensure these queen bees are able to lay their eggs and start their life cycle anew.