For 60 years, a parcel of land on the northern edge of Joliet’s downtown lay all but forgotten. Overgrown with vegetation, this land was once a place where thousands of men came to work and contributed to the great industrialization of America following the Civil War. In 1998, the Forest Preserve District of Will County opened to the public this window to the past with the grand opening ceremony of the Joliet Iron Works Historic Site.

To this day, Joliet is known as the “City of Stone and Steel.” These references date to the 19th century when rich deposits of dolomite limestone along the Des Plaines River valley led to quarrying in the Joliet, Lockport and Lemont areas of Will County. “The city of Joliet actually sits on a thick bed of dolomite just below the surface,” The Herald-News reported in a 2016 article. “Quarrying was Joliet’s first industry, paving the way for early settlement and later the nickname ‘Stone City.’

“By the 1890s, some twenty-five quarries were operating between Joliet and Lemont. Over the decades, limestone blocks were used for foundations, bridge abutments, aqueduct piers and lock walls. The unique color of Joliet limestone made it a favorite for countless homes, commercial buildings and churches in the area.”

And just four years after the end of the Civil War, the Union Coal, Iron and Transportation Company was formed and construction began on an iron and steel factory in Joliet.

Thus was born an industry that would be the bedrock of the Joliet economy for six decades.

The story of the Joliet Iron Works had its beginnings in the 1850s with the nation’s expansion westward. Railroads were booming and the demand for iron and steel was high. The invention of the Bessemer Converter in England soon found its way to America and, in his report to the Forest Preserve District of Will County titled The Blast Furnaces of the Joliet Steel Works: 1873-1937, Dr. Jack Bergstresser of the University of Alabama at Birmingham, discovered that the Joliet plant was the ninth in the nation to adopt this new technology.

Bergstresser, who spent three summers surveying the site, wrote: “The Bessemer or pneumatic process was a technological breakthrough of the mid-19th century that made high volume steel production possible. Earlier methods were expensive and time-consuming, yielding small batches of steel that only could be used economically for making such items as fine cutlery, springs and edge tools. High volume products like railroad lines were made of iron, a cheaper alternative than steel, but one that produced a much less durable product. Prior to the introduction of the two-converter plant, the Union Coal, Iron and Transportation Company, which had made iron rails on the site since 1870, produced 100 tons of iron per day in its puddling furnaces compared to over 300 tons of steel that could be made daily (with the Bessemer converters). The greatly increased production of cheaper, longer-lasting Bessemer steel rails, helped to usher in a whole new era of railroad building just at the moment when westward expansion across the continent was reaching its peak.”

Construction of the Joliet mill began in 1869. To accommodate the growing demand for steel rails, two blast furnaces were erected at the Joliet site. After all of the expenses to build the plant, however, the Union Coal, Iron and Transportation Company did not have sufficient funds to open it.

A reorganization of the company in 1873 resulted in the newly formed Joliet Iron and Steel Company. But a stock market crash and the failure of American banks, known as the Panic of 1873, delayed the opening of the plant yet again.

The Panic of 1873 lasted for six years. By 1879, the Joliet Steel Company finally opened. American industry was back on its feet, and the demand for workers increased. Many of these jobs were filled by immigrants, the first arriving from northern and western Europe and possessing industrial skills.

These were followed by immigrants from eastern and southern Europe, who were largely unskilled but willing to work long hours for low pay. 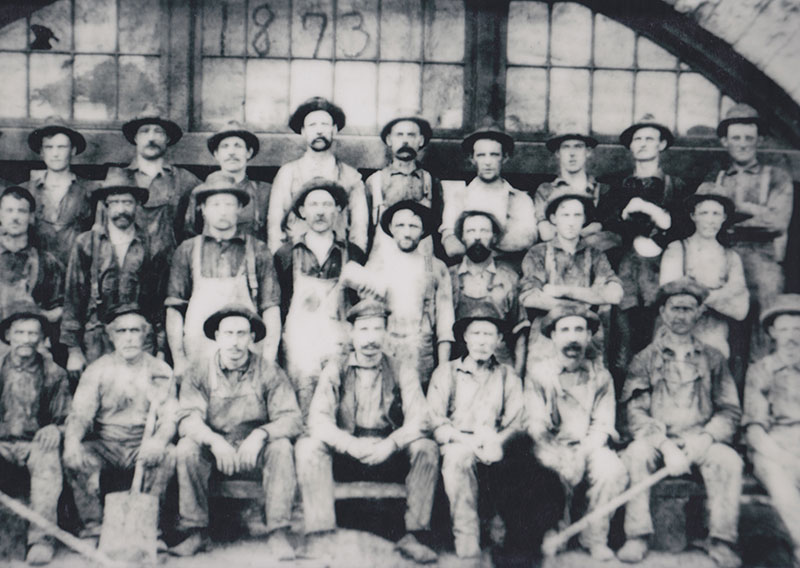 During the 1880s, the Joliet mill was in full operation. Its location was beneficial to take advantage of expanding markets. According to Bergstresser, the plant “occupied a central location between the ore supplies of Lake Superior and the Iron Mountain district of Missouri. Secondly, the Joliet area contained extensive deposits of coal and limestone that could be used, respectively, as fuel and building stone. In addition, several railroads, including the Chicago and Alton and the Rock Island, which (both) ran through the site, and the Michigan Central, which lay nearby, offered a convenient assembly system for raw materials as well as a shipping outlet for the mill’s finished products. Lake ore could also be delivered to the site via the Illinois and Michigan Canal, which flowed past the factory.”

During this period, two blast furnaces towered 72 feet into the sky.

Each furnace required the complicated coordination of 250 workers, who loaded materials — iron ore, limestone and coke — into wheelbarrows and were transported by elevator to the top of the furnaces where the materials were dumped in.

Local steel played a major role in the outward and upward building of America. In 1871, the Great Chicago Fire destroyed much of the city, and former wooden structures were replaced with steel buildings. In 1885, the 10-story Home Insurance Building was completed in Chicago. This was the first modern skyscraper with its steel load-bearing frame. Throughout the next 20 years, Chicago would lead the world in designing and building steel frame skyscrapers.

Managers of the Joliet factory appear to have been socially advanced for their day. In 1889, at a cost of about $75,000, they built the Steel Workers Club, “apparently the pioneer workingmen’s club of any size in America,” according to Will County ILGenWeb’s The History of Joliet Illinois 1927. Membership was restricted to employees of the factory, who paid a nominal fee of $2 per year to use the facility.

“The club contains pleasant reading rooms, with more than sixty periodicals and newspapers, a large billiard room with six tables, a well-furnished and lighted gymnasium and handball court, fine bowling alleys, a tennis court and an athletic field. There is a bath room with a swimming pool, shower and tub baths, a kitchen, card rooms, and a large reception room and three pianos, a large assembly room seating more than nine hundred people.”

In 1901, the United States Steel Corporation was founded, the largest business enterprise ever known. It began with a merger between Carnegie Steel and the Federal Steel Company that soon began to buy and incorporate other companies. The Joliet Steel Works, as it was then referred to, was one of these companies acquired in 1901. In that first year of operation, U.S. Steel produced 67 percent of all steel made in the United States.

Illinois was second only to Pennsylvania as the largest manufacturer of steel rails in the world, and the Joliet plant employed more than 2,000 men with an annual payroll in excess of $2 million. 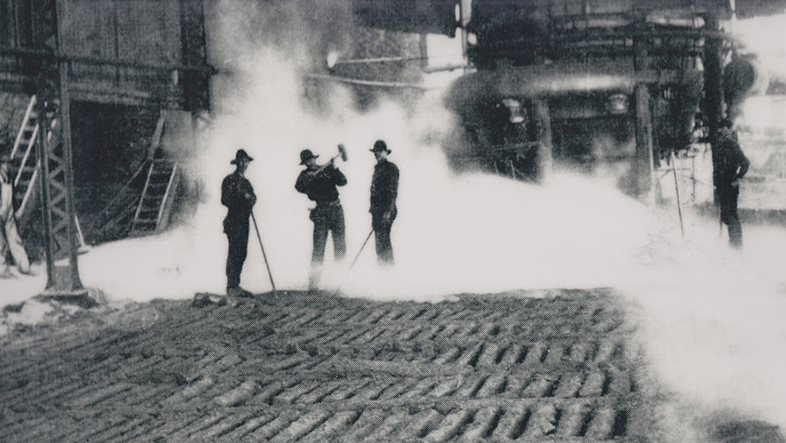 Photo via Forest Preserve District of Will County archives

Two more blast furnaces were added to the factory in 1904 and 1906 respectively. More mechanized than Blast Furnaces 1 and 2, they contained hoist systems that lifted raw materials and dumped them into the furnaces. Furnaces 1 and 2 remained working, and the site moved toward continuous operation.

Along with the mechanization of the plant came the nationwide safety movement. As early as 1901, U.S. Steel promoted the well-known “Safety First” slogan of the National Safety Council. The Joliet Works (another reference to the plant) was at the forefront of safety and received national recognition for industrial safety measures.

In 1913, the company newsletter, The Mixer, debuted. “The Mixer is sort of a meeting place where we congregate each month and get better acquainted,” the newsletter announced. “Here we exchange ideas on the home, safety, education, and many other timely, appropriate subjects of interest to the majority. And what makes our little magazine all the more interesting is that it is the combined product of a large and ever increasing number of employee contributors.”

When the Unites States entered the Great War in 1917, demand for steel increased dramatically as orders for weapons and vehicles came pouring in. The Joliet Works experienced its highest production during this time.

The stock market crash of 1929 ushered in the Great Depression and the ultimate end of the Joliet Works. The factory was now 60 years old, and with demands for its products eroding, U.S. Steel closed the facility. In 1933, the blast furnaces went cold and, by the end of the decade, the plant was disassembled and its machines and usable parts, including the blast furnaces, were shipped to other U.S. Steel factories for reassembly.

What was left were the foundational ruins of the once bustling factory. 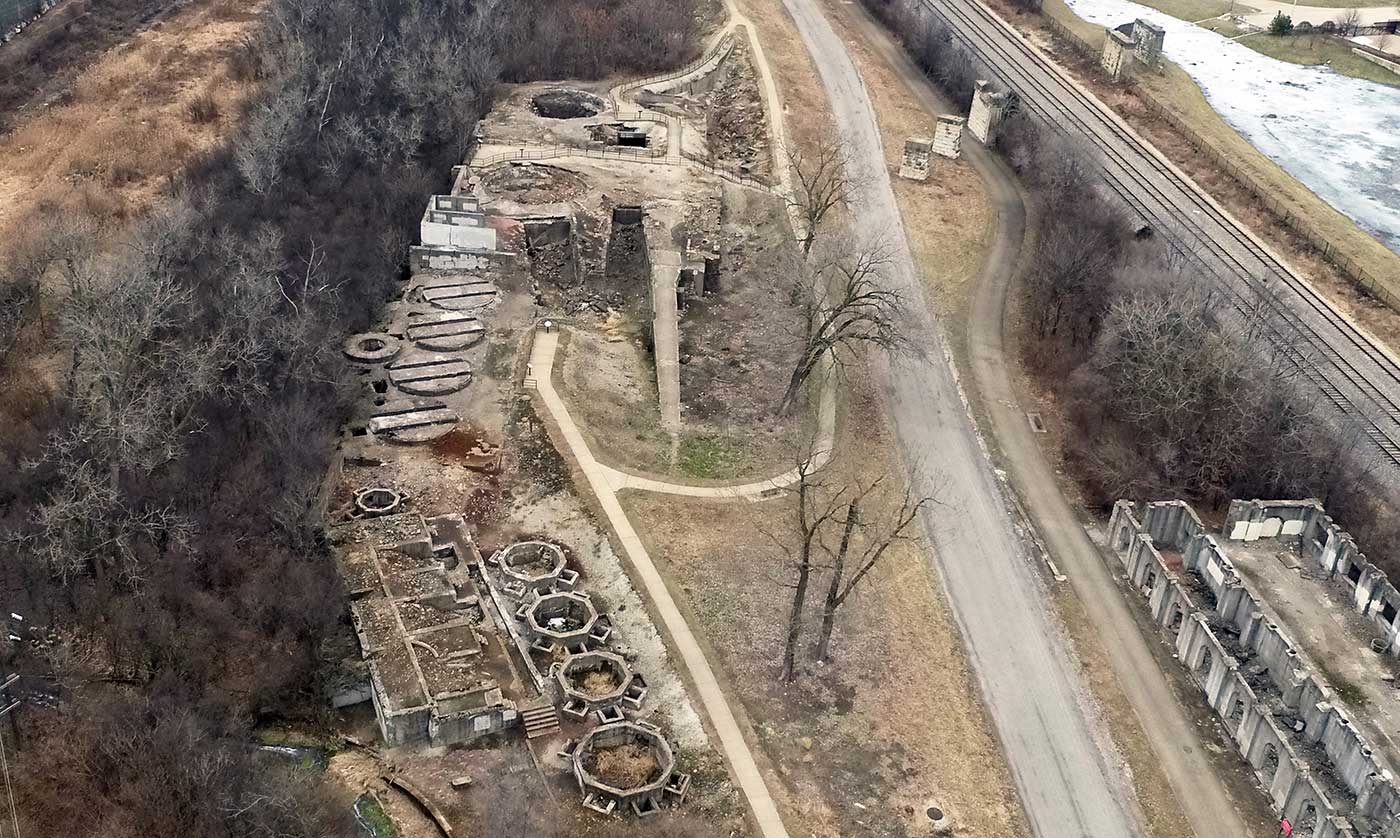 Decades passed, and memories of this site that gave rise to the City of Steel faded. Then, in the early 1990s, an open space organization, CorLands, began negotiating with U.S. Steel, which still remarkably owned the land on which the Joliet Works existed. U.S. Steel agreed to donate the land, 45 acres, to CorLands if it could be developed as a memorial to the factory and the thousands of men who worked there.

The District acquired another 7 acres in 1996 and 1997 for a parking lot for the preserve.

It was Bergstresser’s report that guided the District in interpreting the layout of the factory, represented by the foundations that remained. The District developed the property for self-guided tours. A .59-mile concrete walkway extends through the linear site. Beside each of the foundations is a wayside exhibit, which utilizes text to describe what originally stood there and how this contributed to the iron-making process, and a graphic showing the structure or explaining the smelting process. Each interpretive exhibit also includes a description of the job that was required by the worker of that job.

This was because the Forest Preserve District of Will County strove to tell the factory’s human story as well as the manufacturing one. In many ways, the Joliet Works stood as a microcosm of what was happening throughout the nation during the Industrial Revolution. Thousands of immigrants, having entered the country through Ellis Island in New York, found their way to Joliet and took the menial labor jobs that the Joliet Works offered. Laboring 12 hours a day, six days a week, these workers were paid little, between $2 and $9 a day, but from those meager earnings they were able to buy a home and raise their families. All of their children born in Joliet entered the world as United States citizens – the grandfathers and great grandfathers of many.

As time passes and Joliet’s steel industry falls further into the past, the Joliet Iron Works Historic Site will survive to tell the story of the City of Steel.