Our waterways are drowning in plastic

Bundled up in multiple layers for warmth and water resistance, the group scoured the shoreline searching for man-made materials marring the beauty of the preserve during the Forest Preserve District’s fourth annual “River Shoreline Cleanup” program.

“We’re appreciative that on such a crummy day, so many people would be willing to give their Saturday morning to come out and do this not-so-glamourous work,” said Tina Riley, facility supervisor at Four Rivers Environmental Education Center in Channahon.

Picking up litter at Rock Run Rookery, however, isn’t your normal cleanup task. Unfortunately, the site is besieged with microplastics, which are tiny pieces of plastic that may become smaller as they are batted around by the elements, but they never truly go away, Ward said. Once the plastic is in the water, it gets into the food chain and both fish and birds will eat it, which is a problem in rivers and oceans around the world.

Locally, these plastics blow or flow into area waterways and make their way into Rock Run Rookery through a channel to the Des Plaines River. The channel was created years ago when the site was a quarry, and the garbage that flows into the river comes from multiple sources, including wastewater treatment plants that discharge into the river. Trash also blows in from garbage trucks, trash cans, yards, roadways, etc.

“So once it makes its way into here, it kind of gets blown around and never goes anywhere else,” said Erin Ward, an interpretive naturalist for the Forest Preserve District. “Picking it up will really make a difference in the bird habitat that is here.” 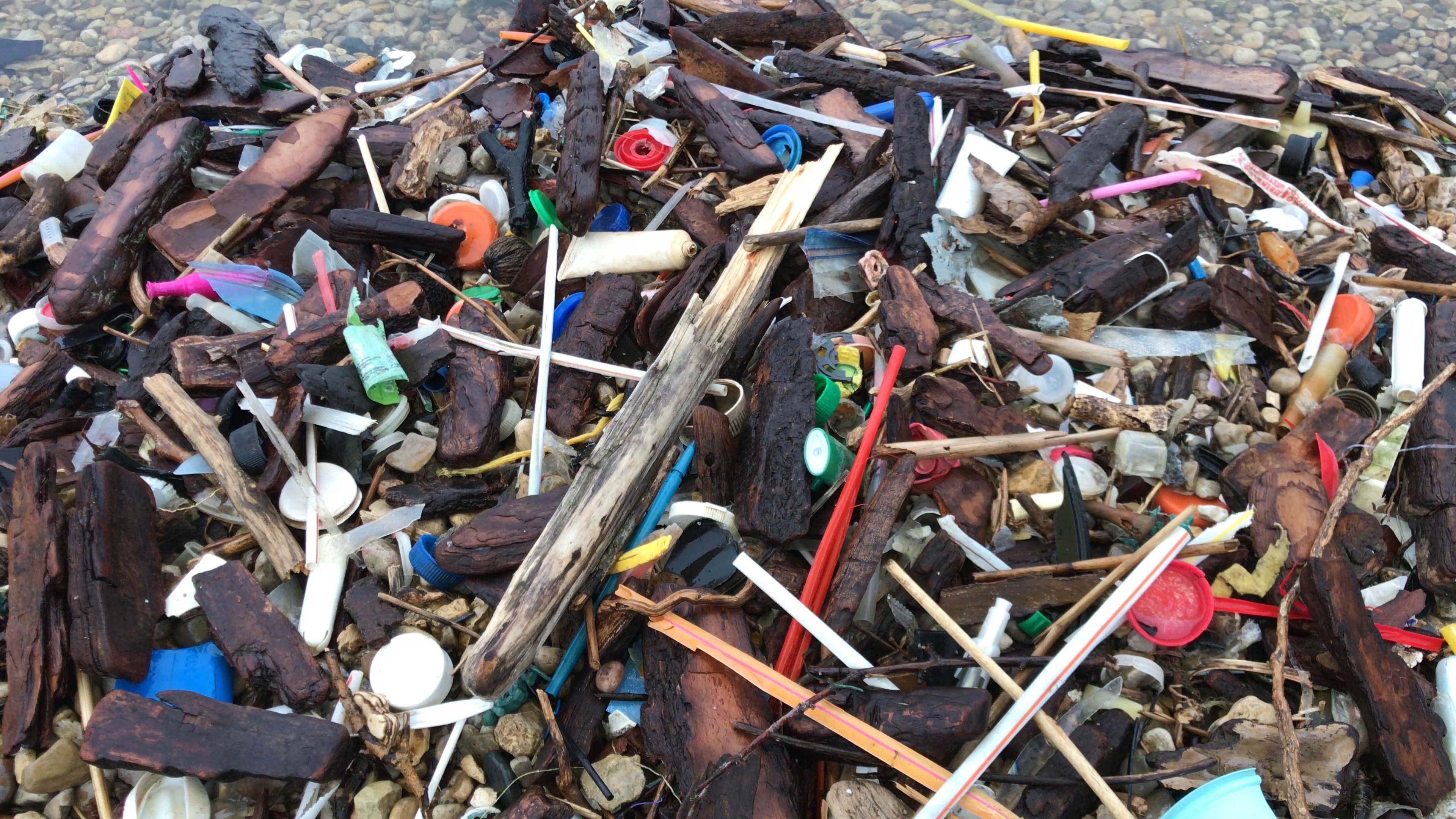 Taira Tracy of Joliet, who works in the environmental department at Ineos Enterprises, which is located just down the river from the rookery, said she volunteered Saturday as an individual but she brought a few coworkers with her for the cleanup day.

“I just can’t believe how much stuff people throw away and it affects the fish and the environment,” she said. “People throw away one piece of trash but they don’t realize how much it accumulates with everybody else’s trash. I wish more people would volunteer and help because it’s really beautiful out here and we need to keep it beautiful.”

Kevin Mikuta of New Lenox said he showed up because he cares for the environment.

“It’s actually pretty shocking to me,” he said of the accumulation of plastic. “I’m not surprised at the amount of trash, but I’m surprised at how small the pieces are. It’s appalling. These are tiny bits. I didn’t think I’d be on my hands and knees as much as I am.”

William Grieshaber of Joliet Township, who shoreline fishes at Rock Run Rookery and other Forest Preserve spots, said he decided to help clean the site because he wants to escape the modern world when he enters a preserve, not be surrounded by reminders of it.

“I like to hike and explore and the thing that makes these places beautiful is the lack of human destruction,” he said. “When you go back and see constant reminders of daily life, it’s really kind of depressing. I just want to do my part and help clean up and make it a beautiful place.”

Gail Durkee of Channahon said she has attended a lot of guided bird walks and takes a lot of pictures in the preserves, but Saturday was the first time she volunteered for a cleanup day.

“I know from walking the different areas that it’s very littered and I wanted to help,” she said. “And I know it helps the birds if it’s cleaner.” 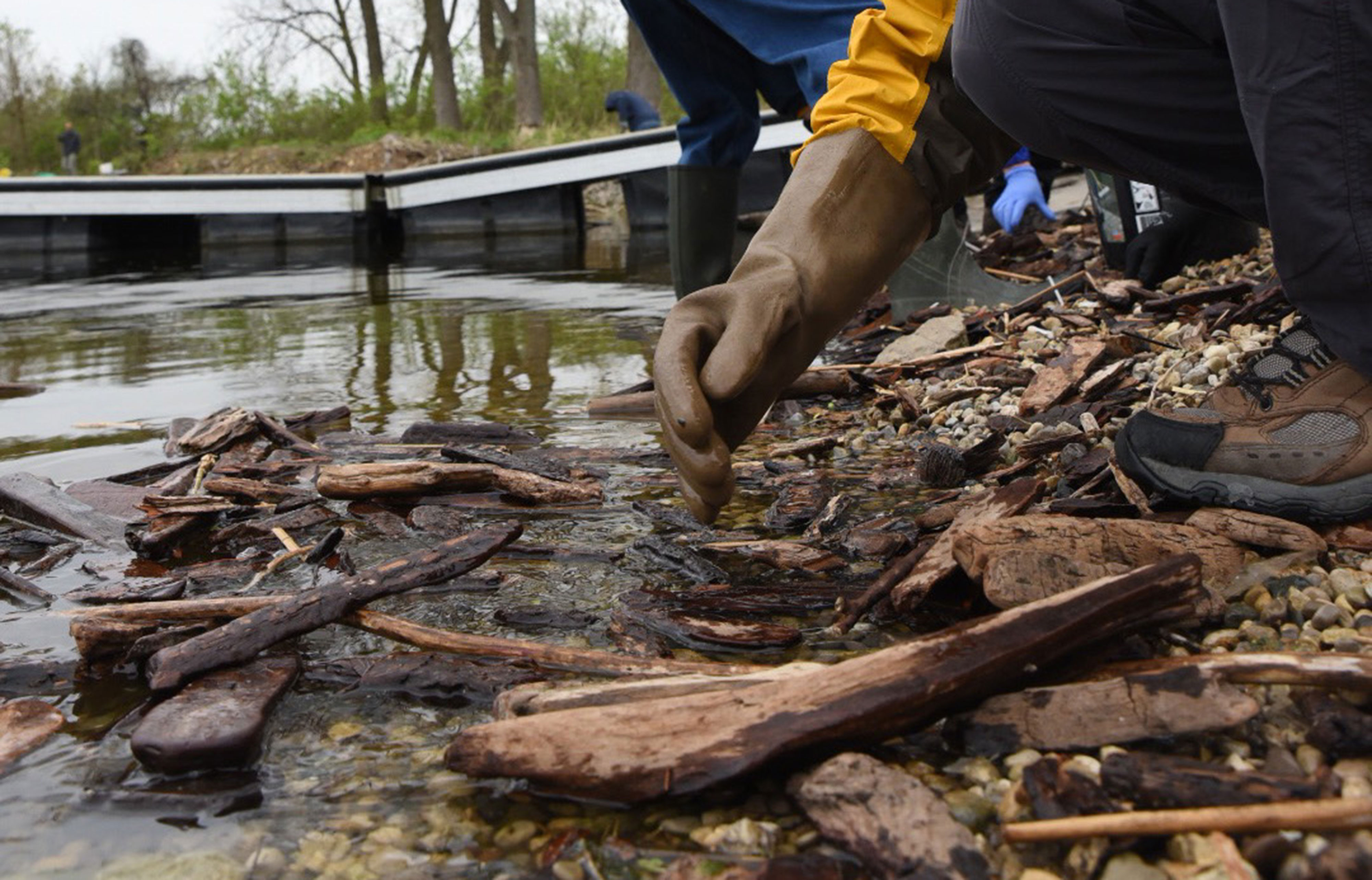 One of the commonest items found during the cleanup day were plastic cigar tips. Toys, bottle caps, barrettes, hair brushes, pens, lighters, plastic toothpicks, straws, personal hygiene products and nondescript chunks and slivers of plastic all wind up becoming flotsam and jetsam in the river and rookery.

Some of the odder items found during a past river cleanup are displayed at Four Rivers Environmental Education Center to educate people about properly disposing of trash and plastic. As the word gets out about how plastic is contaminating our world, individuals and businesses are vowing to use less, Ward added.

“We have some local restaurants that have already taken the challenge and are using paper straws now, which is great,” she said.

Individuals also have to get involved, Ward urged. “This problem didn’t happen overnight,” she said. “And everybody is a part of this problem, so everybody needs to be a part of the solution. I think it’s unacceptable for people to complain and not do anything about it.” 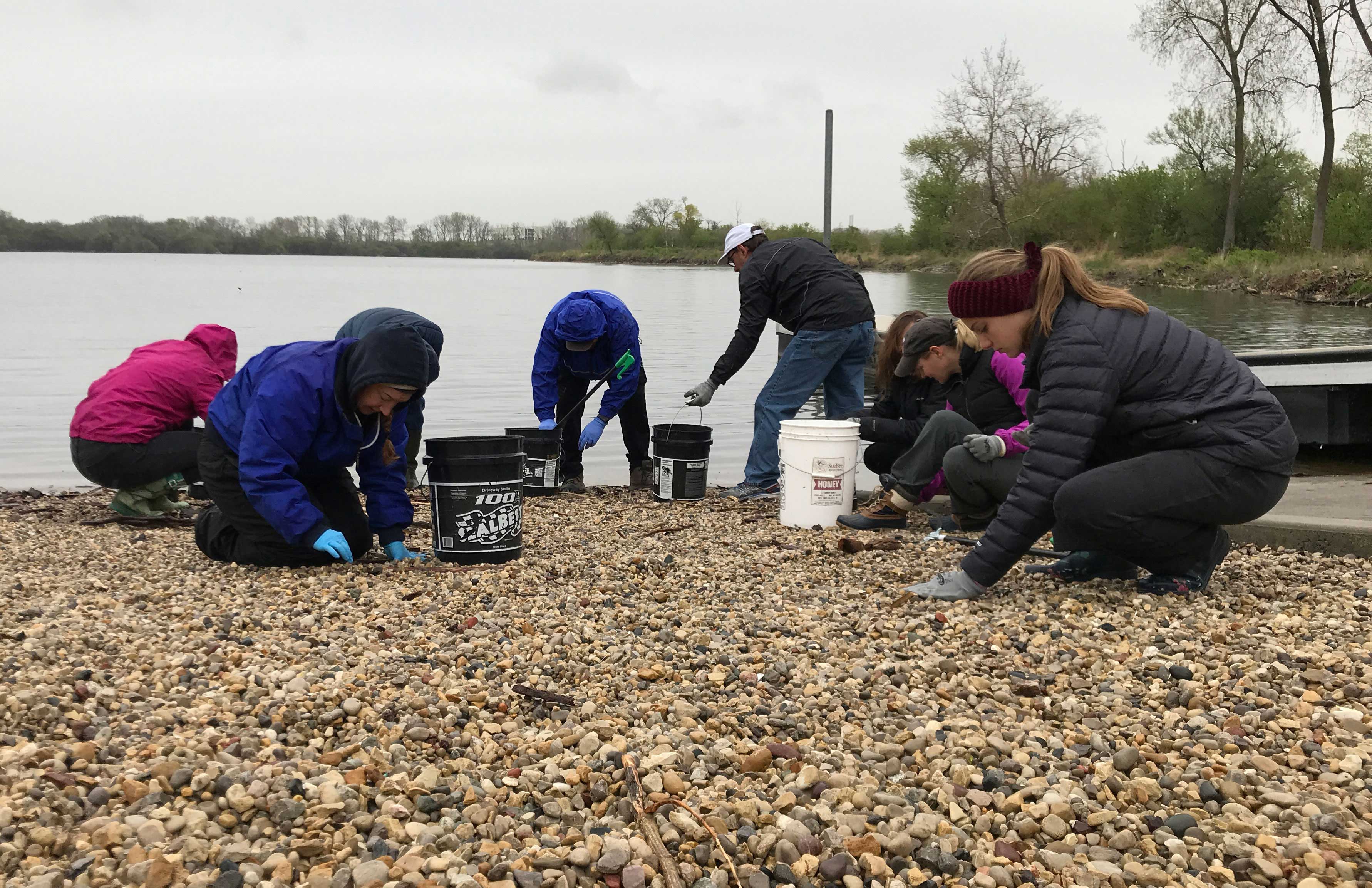 Working to remove the small bits and pieces of plastic was time-consuming work. But the challenge never daunted the volunteers. 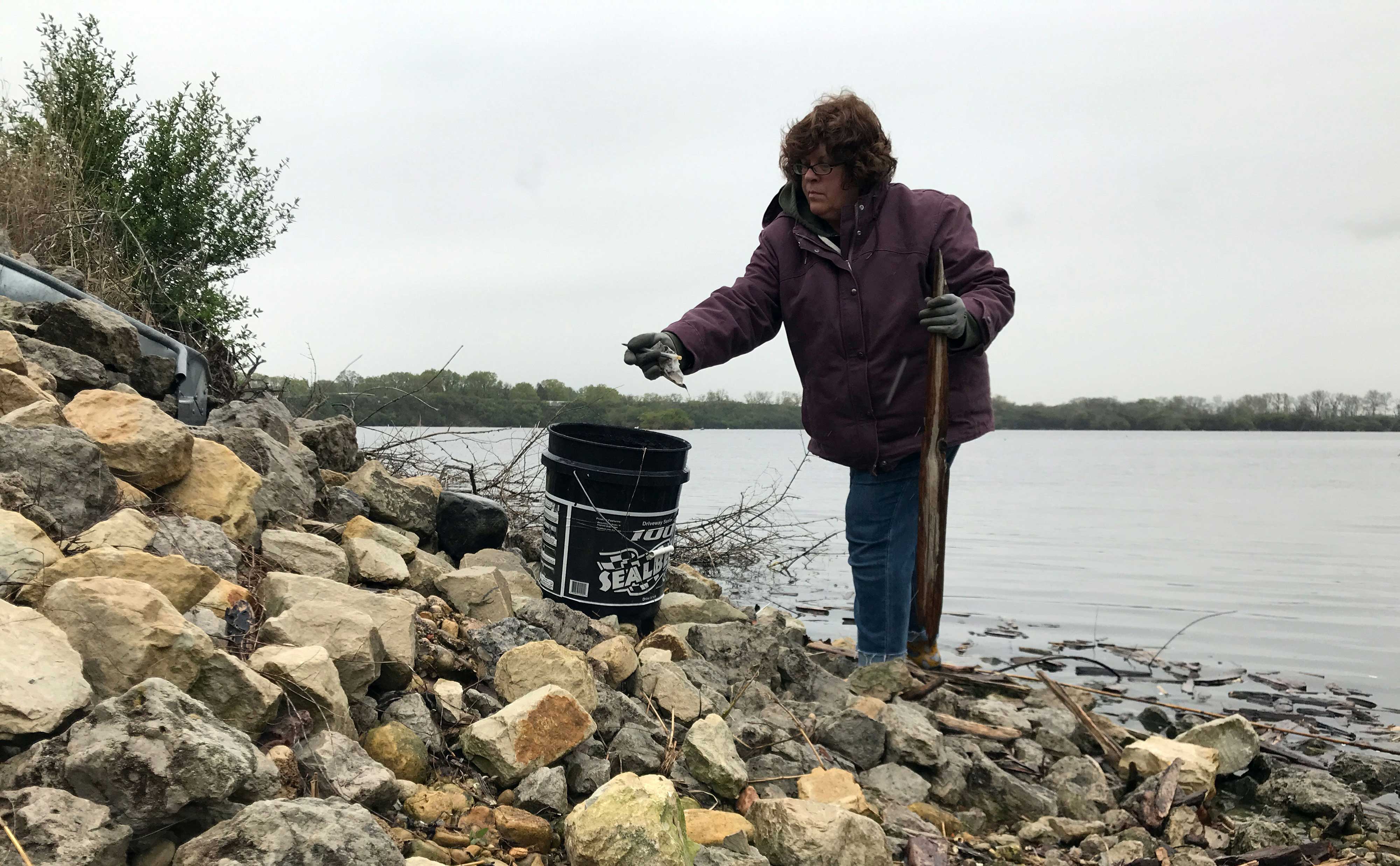 ‘We can do better’ 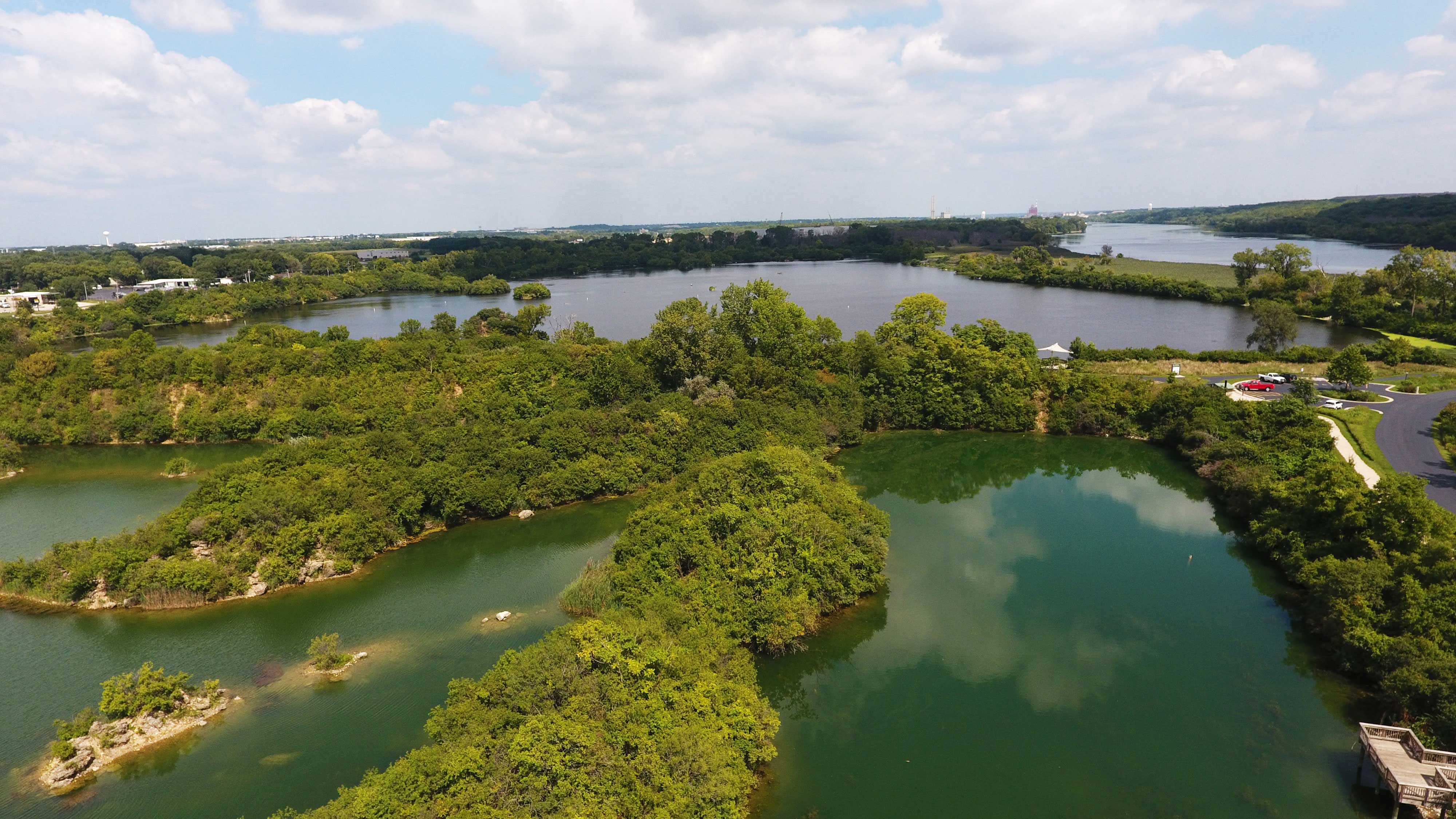 Riley, the Four Rivers facility supervisor, said those who sign up for cleanup days really learn what the problem is all about. Seeing all of the garbage makes people believe something needs to be done.

“It’s really a massive problem that everybody is becoming more and more aware of,” she said. “When you come out here to places like the rookery and you actually see what a shoreline looks like with this amount of plastic, it can be shocking. Only if you are here will you really, really understand.”

Riley said the volunteers who show up will become ambassadors for a movement encouraging everyone to use less plastic so the trash doesn’t pollute our waterways.

“It’s about raising awareness,” she said. “Every decision we make as consumers really does ultimately have an impact on the health of our climate and environment. The truth of the matter is, we can do better than this.”