Most of us can’t imagine a world without chocolate, but that’s the reality we would face if we don’t take steps to protect pollinators – the insects and animals required to keep plants and, in turn, food plentiful on our planet.

Across the world, many of our favorite foods and drinks are dependent on pollinators for their continued availability. In North America, 99 percent of pollinators are insects, mainly bees, according to the University of Illinois Extension. In Will County and across Illinois, insects are the primary pollinators, along with some species of birds.

However, the pollinator population is in decline in Illinois and across the world, according to the Illinois Department of Natural Resources. While the precise reasons for the population decline are not fully understood and are being researched, several factors are believed to be contributing, including the loss of habitat, the use of pesticides, competition from nonnative plant species, the presence of mites and diseases affecting pollinators.

As the pollinator population becomes smaller, the number of viable seeds in the plants they pollinate also decreases, which leads to fewer plants as well as less pollen and nectar for the pollinating animals, according to the IDNR.

“Pollinators include bees, birds, butterflies and bats (globally). These native species move pollen from one plant to the next, fertilizing the native plants, which then turns to seed and fruit,” said Juanita Armstrong-Ullberg, a former natural resource land manager for the Forest Preserve District. “In order for native species to reproduce, they need native pollinators. Some species of bees, birds and bats pollinate specific species, or specific plant families. This is especially true for bees.” 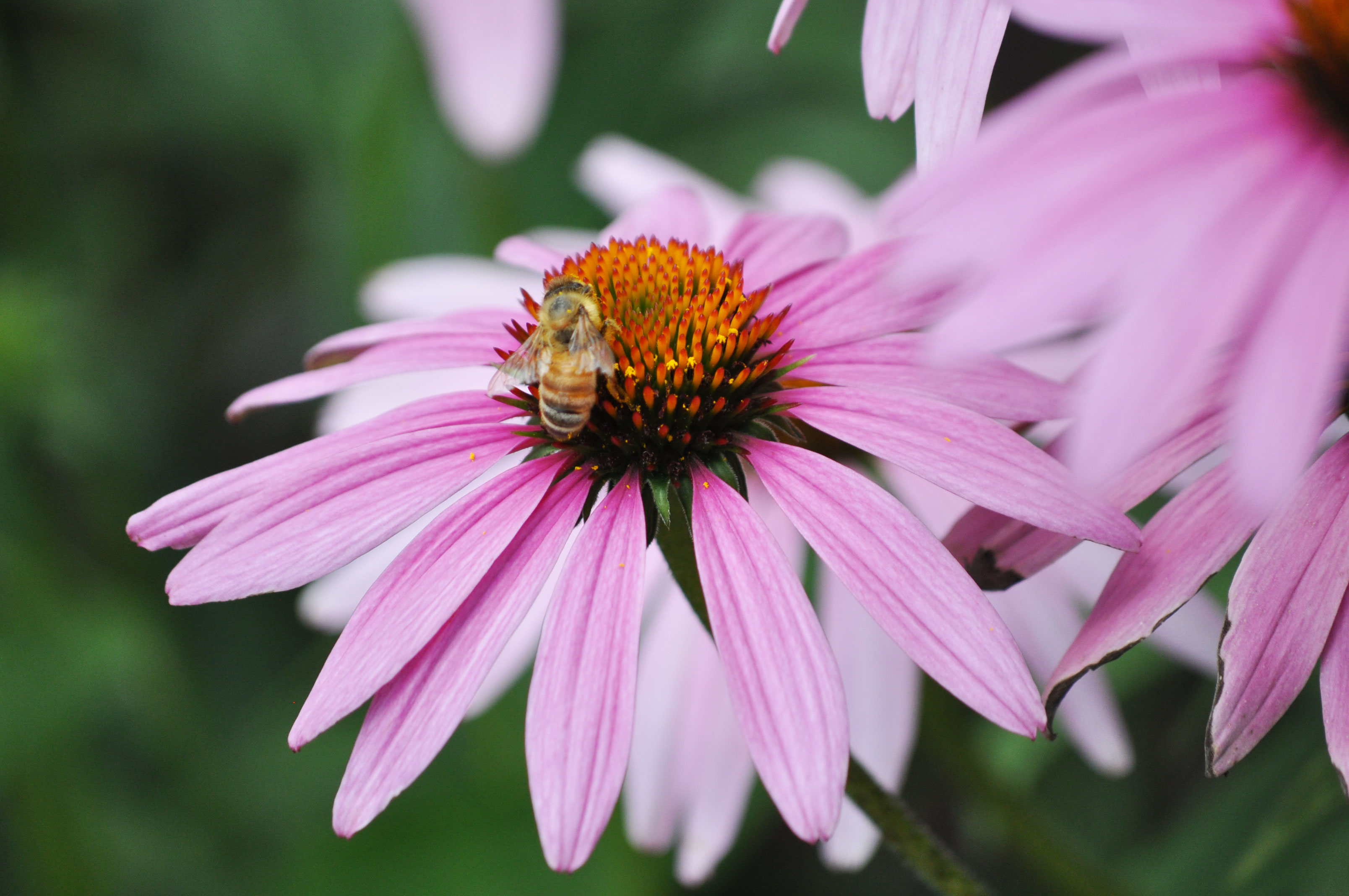 You can do your part to help the pollinator population thrive in our area by planting and maintaining a garden with pollination in mind. The key to attracting pollinators to your yard or garden is planting native plants, said Bob Bryerton, an interpretative naturalist for the Forest Preserve.

Because native plants are designed to thrive specifically in our climate, planting them strengthens the entire ecosystem.

“Native plants are important because that’s what the critters are used to here,” Bryerton said. “The more native stuff you have, the healthier the system is and the more resilient it is.”

Native plants also attract pollinating birds and insects to your yard, including hummingbirds and monarch butterflies. And while bats are not typically pollinators in Illinois, they are a critical part of the ecosystem, so having a garden rife with native plants helps ensure a healthy habitat for them as well.

One benefit for gardeners who want to dedicate space for a pollinating garden is that many native plants are perennials that will return year after year and require very little labor to keep them healthy and thriving, he said. And with a healthy and thriving garden, you’ll attract a multitude of birds, bees, bats, butterflies and other insects to your garden. This, in turn, helps ensure both the animal and plant species will thrive locally.

In our area, for example, butterflies are plant-dependent, meaning if the plants they use as hosts are not pollinated, those species will go extinct, Armstrong-Ullberg said. One example is the Karner blue butterfly. These butterflies, which were once found in significant numbers in and around the Indiana Dunes National Lakeshore in Northwest Indiana, are dependent on the nectar from wild lupine. In addition, their caterpillars feed on the lupine leaves. However, in 2012, during an unusually warm and early spring season, the caterpillars emerged from their cocoons before the lupine plants had grown, causing the butterfly population to drop in the dunes area, Armstrong-Ullberg said.

The dwindling bee population has garnered a lot of headlines in recent years, and for good reason. Bees are one of the world’s primary pollinators, and their numbers have been in steep decline over the past several years.

In Illinois and throughout the Midwest, the rusty patched bumble bee has historically been a well-populated and broadly distributed species, and it helps pollinate tomatoes, apples, cranberries and other plants. In 2017, the rusty patched bumble bee was placed on the endangered species list by the U.S. Fish and Wildlife Service. Over the past 20 years, the bumble bee’s population has declined by an astounding 87 percent, the Fish and Wildlife Service reports, and it is  present in only 0.1 percent of its historical range.

Armstrong-Ullberg said experts believe the rusty patched bumblebee’s population decline is caused by several factors, including intensive farming and the use of pesticides.

These examples illustrate the important symbiotic relationship between native plant and native animal species and how they create a healthier environment for all species, including us.

To contribute to a thriving natural habitat locally, you can be mindful of the plants you put in your yard and garden and make an effort to plant native plant species. One of the benefits of this will be the wealth of critters you attract to your yard, including butterflies, hummingbirds and other songbirds and a multitude of insects, including the bees that are so critical to our existence.

“It’s like a living laboratory out there,” Bryerton said.

Here’s a look at some of the plants you should consider planting in your own yard to contribute to a healthy habitat for pollination. 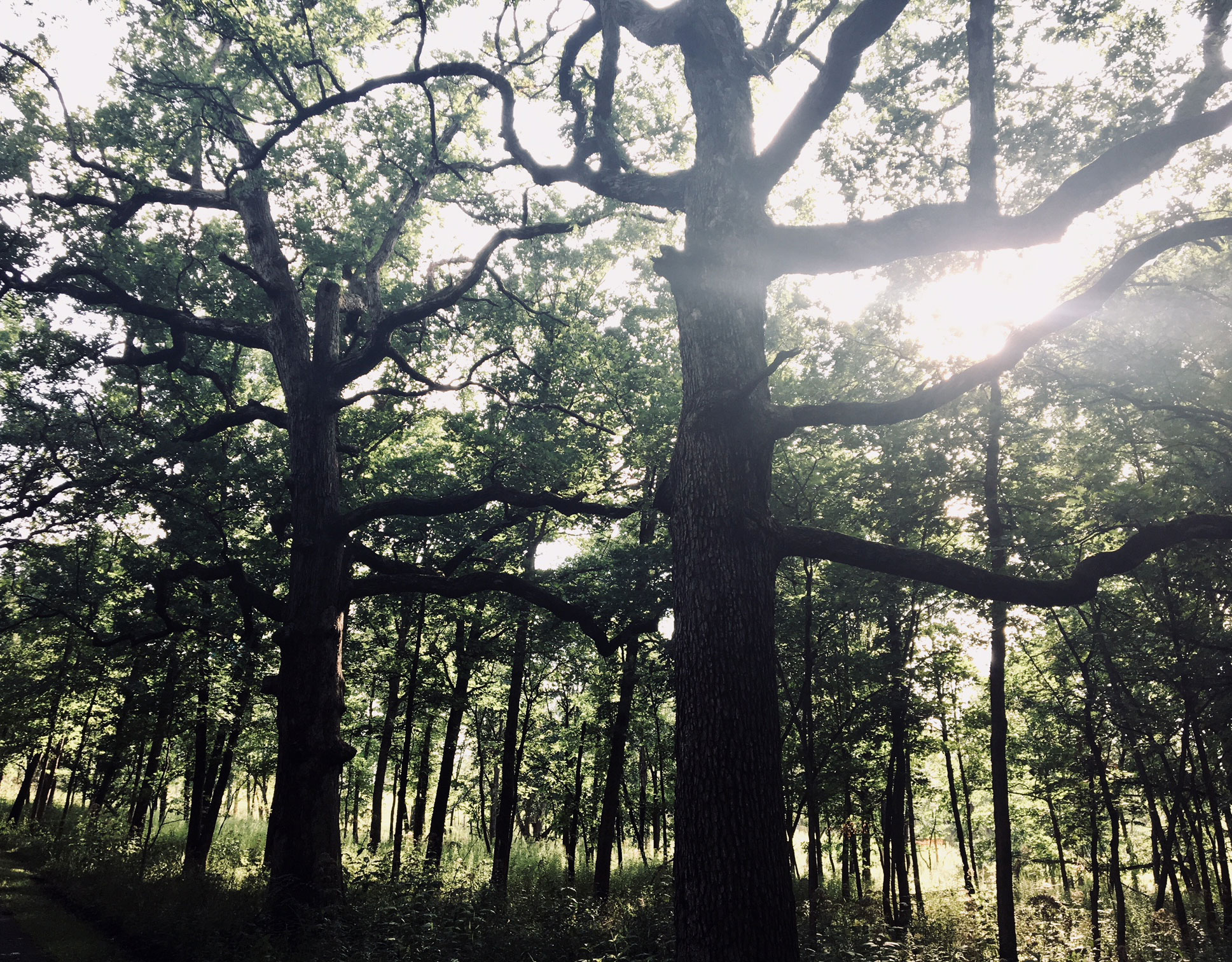 Many of the trees we find in our communities are cultivated and not native to our area, Bryerton said. If you are looking to plant a new tree in your yard, native species such as oak trees will host more insects and other organisms than nonnative species. These trees will also attract more caterpillars, which in turn attract more birds.

The Morton Arboretum maintains a lengthy list of trees suitable for growing in the Will County area in its Northern Illinois Tree Species List, which includes information about particular species’ site requirements and ideal planting locations. Many of the trees listed are native to Illinois, including a variety of birch, hickory, maple, oak and pine trees. 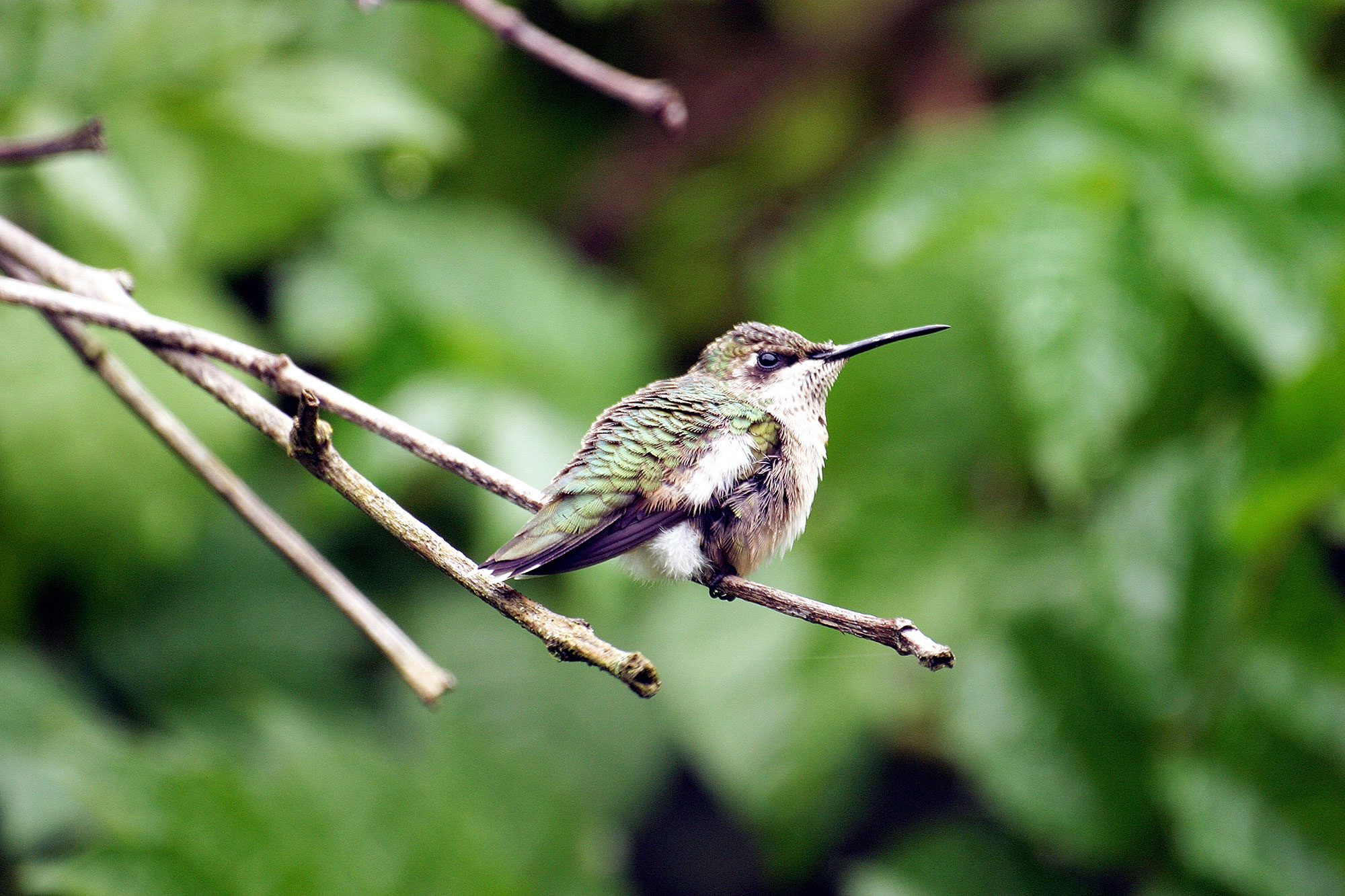 Like trees, many people prefer planting shrubs because of the privacy they provide. But it’s not just people these shrubs offer privacy for. Many insects, birds and small mammals also use shrubs for shelter and privacy, Bryerton said.

Among the shrubs he recommends planting in a pollinator garden are arrowwood viburnum, spicebush and American hazelnut.

Hummingbirds are among the pollinating animals that like shrubbery, Bryerton said, because they like open, partially wooded areas. 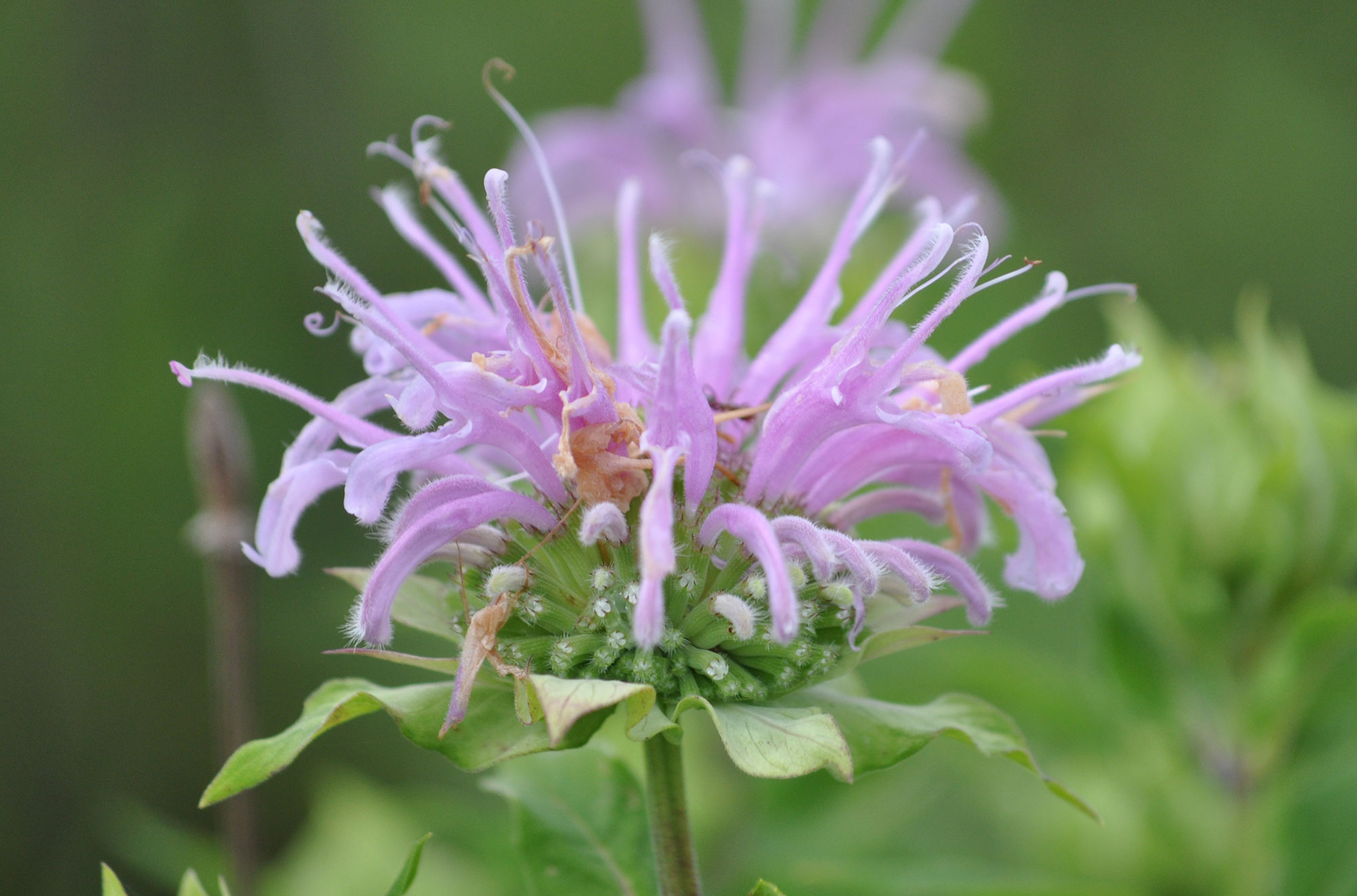 Many people prefer the beauty of flowers in their gardens and landscaped areas, and many native flowering plants will give you the pop of color you want while also attracting pollinating insects.

He said milkweed used to be more common in Will County and northern Illinois, but its prevalence has fallen recently. As a result, the monarch population has also decreased. Two examples of milkweed species native to our area that are easy to plant and maintain in a garden are common milkweed and swamp milkweed.

Bryerton said they have had success attracting monarch butterflies to their milkweed plants in the native garden at Plum Creek Nature Center, located at Goodenow Grove Nature Preserve.

Another perennial wildflower that attracts butterflies is Joe-Pye weed. Bryerton said Joe-Pye weed is a good alternative to butterfly bush, which is popular for attracting the beloved insects but is best avoided because it’s not native to Illinois. And sticking with native plants is best not just for the plants and the butterflies you hope to attract, but for the health of the entire ecosystem.

Where to Find Native Plants 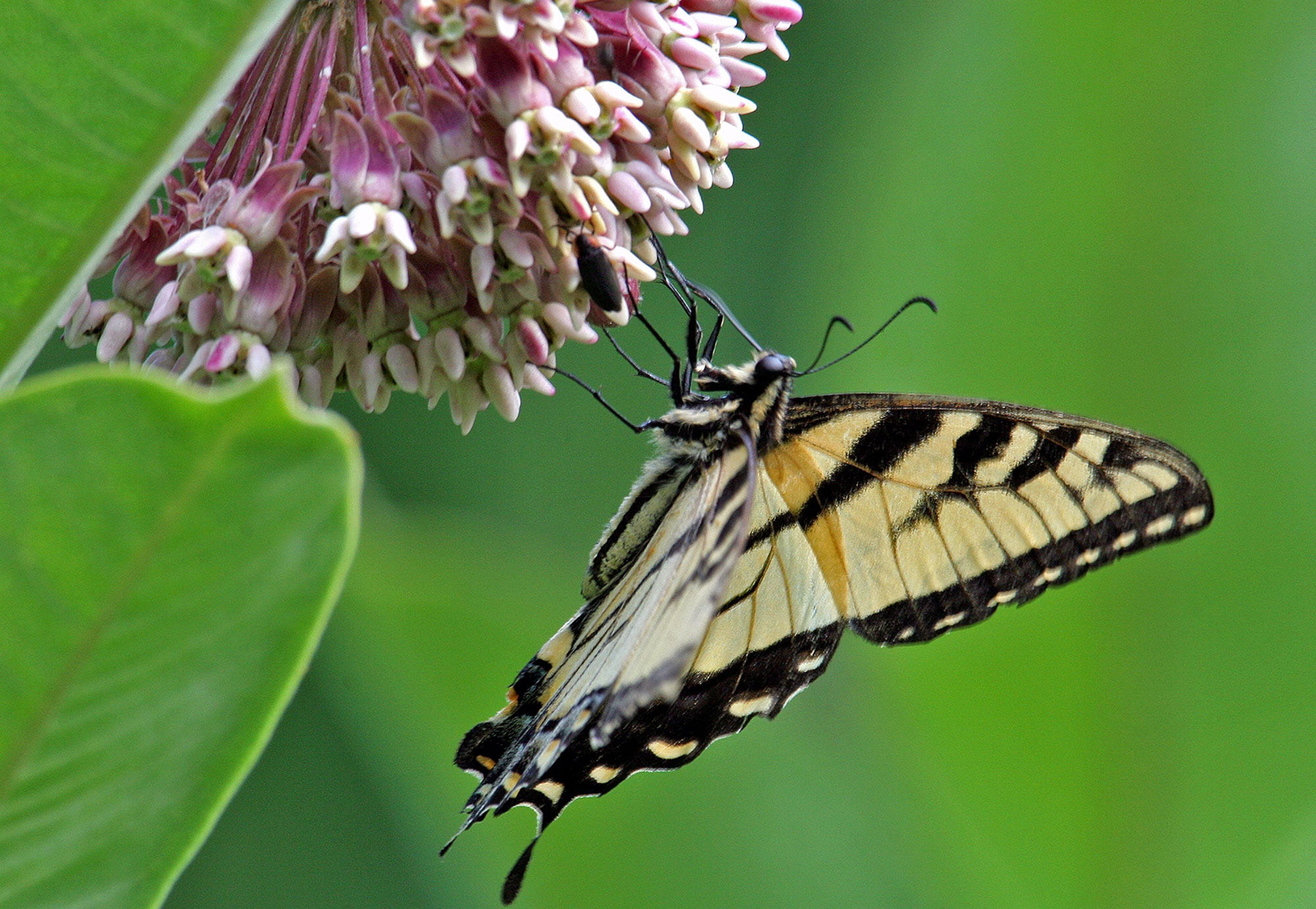 Once spring has sprung, garden centers become a hotbed of activity, full of flowers, shrubs and trees just waiting to be planted. But the garden centers that pop up each year at local home improvement and big- box stores are not necessarily the best place to buy native plants.

Bryerton said seeking out native plant sales being held in the area is your best bet for finding healthy, native plants to bring to your own yard or garden.