A lively loop of outdoor fun for the whole family

Rock Run Preserve in Joliet can be a bustling place. The trail that runs through the preserve — the Rock Run Greenway Trail — draws people to the area all year long for all kinds of recreational activities.

Rock Run Preserve has two access points. Black Road Access and Paul V. Nichols Access off Essington Road are both located in Joliet. Both access areas provide an easy connection to the trail, and the preserve can also be traveled to by foot from several nearby neighborhoods.

“This preserve is great for families in general but especially for families who have a wide range of ages,” said Jess McQuown, an interpretive naturalist for the Forest Preserve District. “You can have a nice, short walk along the main, paved trail or you can add in some of the natural surface trails to expand the hike when older kids want to see more.”

Rock Run is also only a short trip from Hammel Woods in Shorewood, now easily accessible via a paved trail that spans the DuPage River and Interstate 55 and connects the DuPage River Trail and the Rock Run Greenway Trail.

The land for Rock Run Preserve was acquired between 1990 and 2009. The preserve itself is 320 acres and is part of the Rock Run preservation system, which conserves more than 1,450 acres in all. A portion of the preserve totaling 168 acres was registered as an Illinois Land and Water Reserve, providing permanent protection of the site’s natural resources.

One of the draws at Rock Run is that there is a lot to see and explore, but it’s not so big that it is overwhelming or unmanageable for visitors.

“With everything looping together, the preserve can feel large without having to hike miles out just to turn around and do the same thing again,” said McQuown, who has held programs at the preserve and also enjoyed it personally. 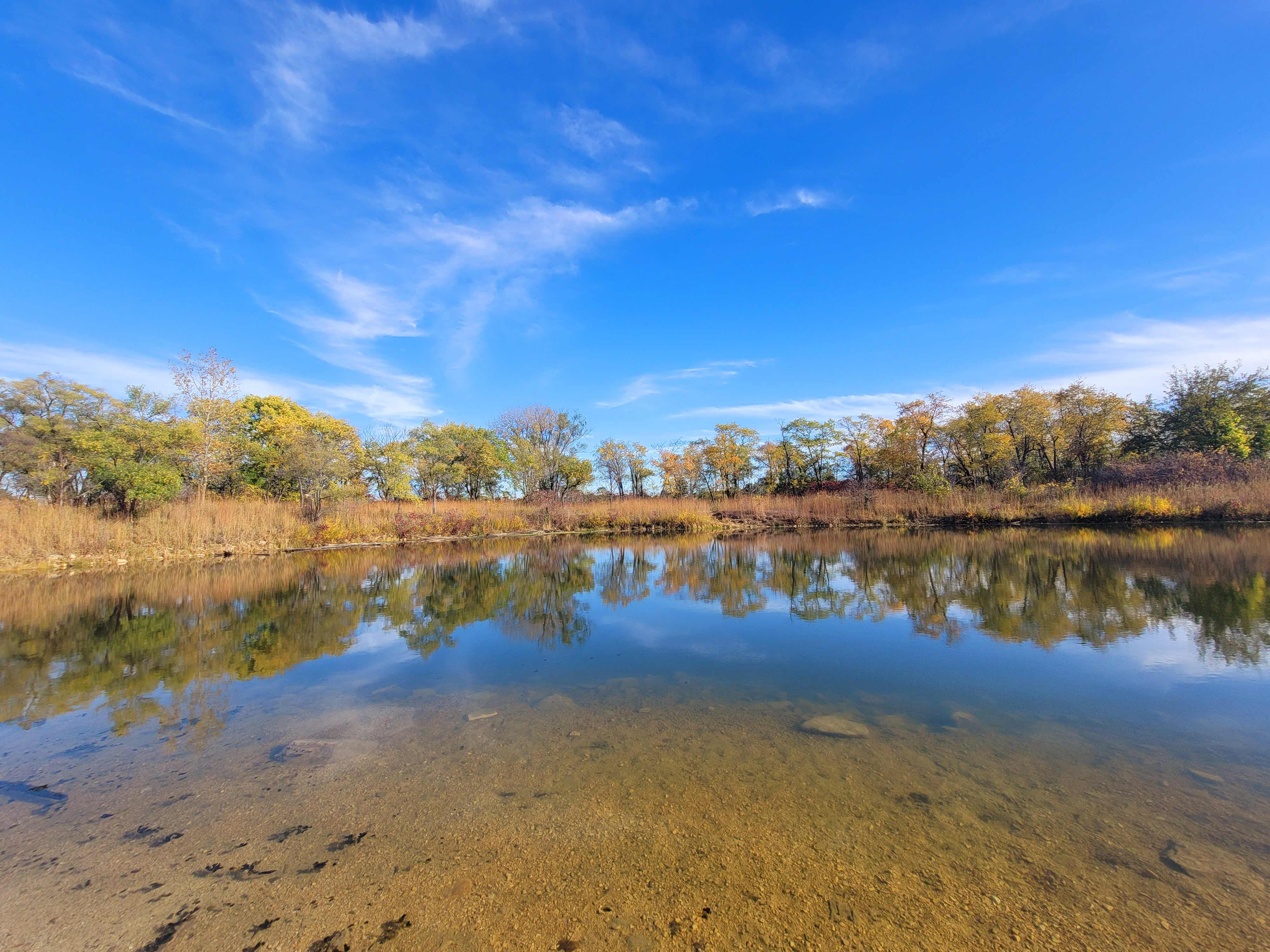 Rock Run includes forest and prairie habitats as well as wetland areas, including a few small ponds and the portion of Rock Run creek that runs through the preserve. With its varied habitats, the preserve is home to a wealth of plant and animal species that can be enjoyed year-round.

As you stroll through the preserve, you’re likely to see — and hear — wildlife at every turn. You may catch a glimpse of squirrels and rabbits scurrying about and frogs lined up at the water’s edge, ready to leap away to safety. White-tailed deer are a common sight along and sometimes even on the trail, and on a warm, sunny day you may see turtles basking on rocks and logs along the waterways. 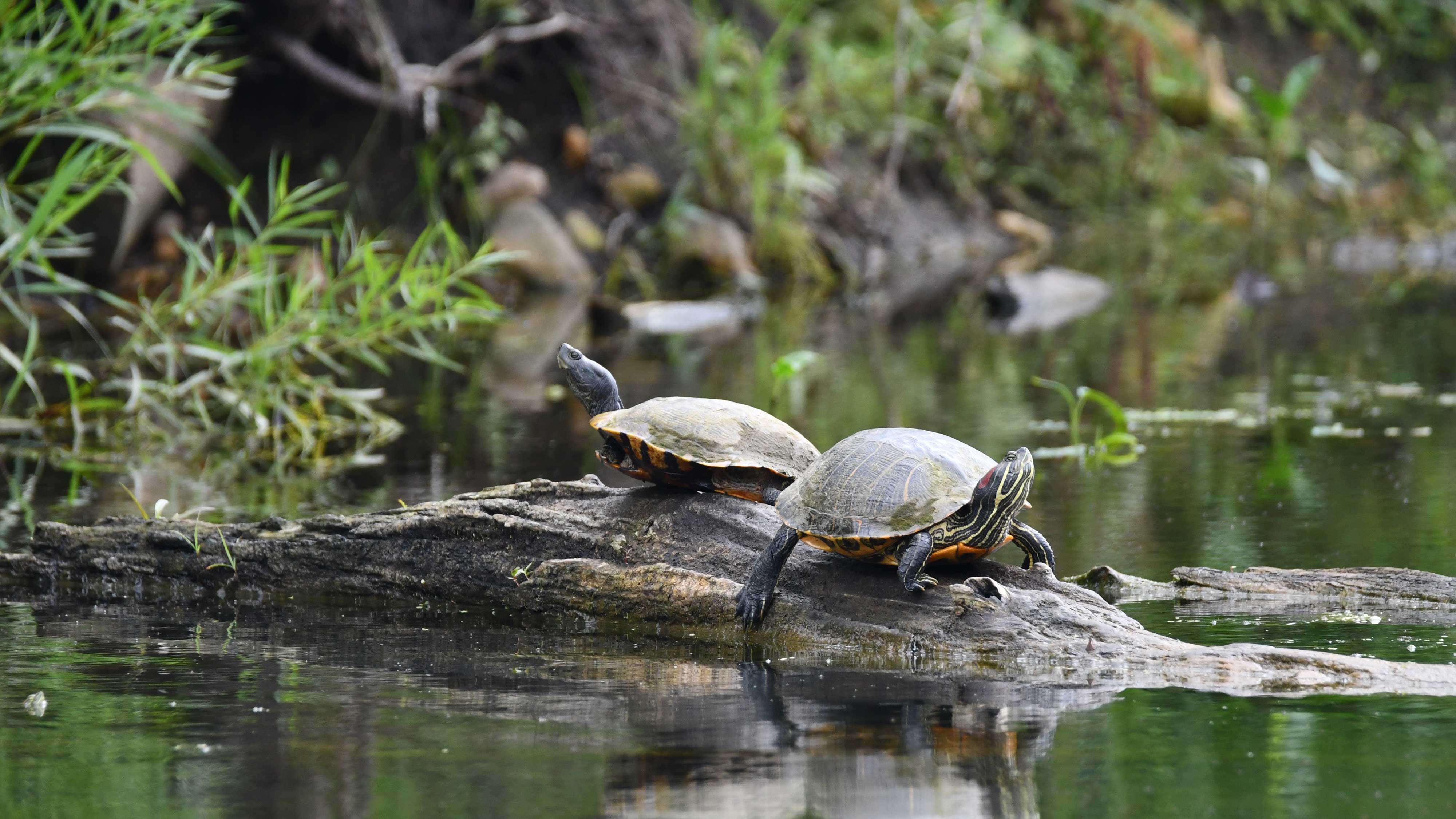 With a mix of trees and grasslands, Rock Run is a good place for birding too, including some colorful finds, like eastern bluebirds, indigo buntings and eastern towhees, McQuown said. All told, dozens of birds big and small live at Rock Run Preserve all year long, so every visit can be a unique birding adventure. Other birds present at Rock Run include warblers, orioles, woodpeckers, herons, egrets and sandhill cranes. You might even see a bald eagle soaring overhead! 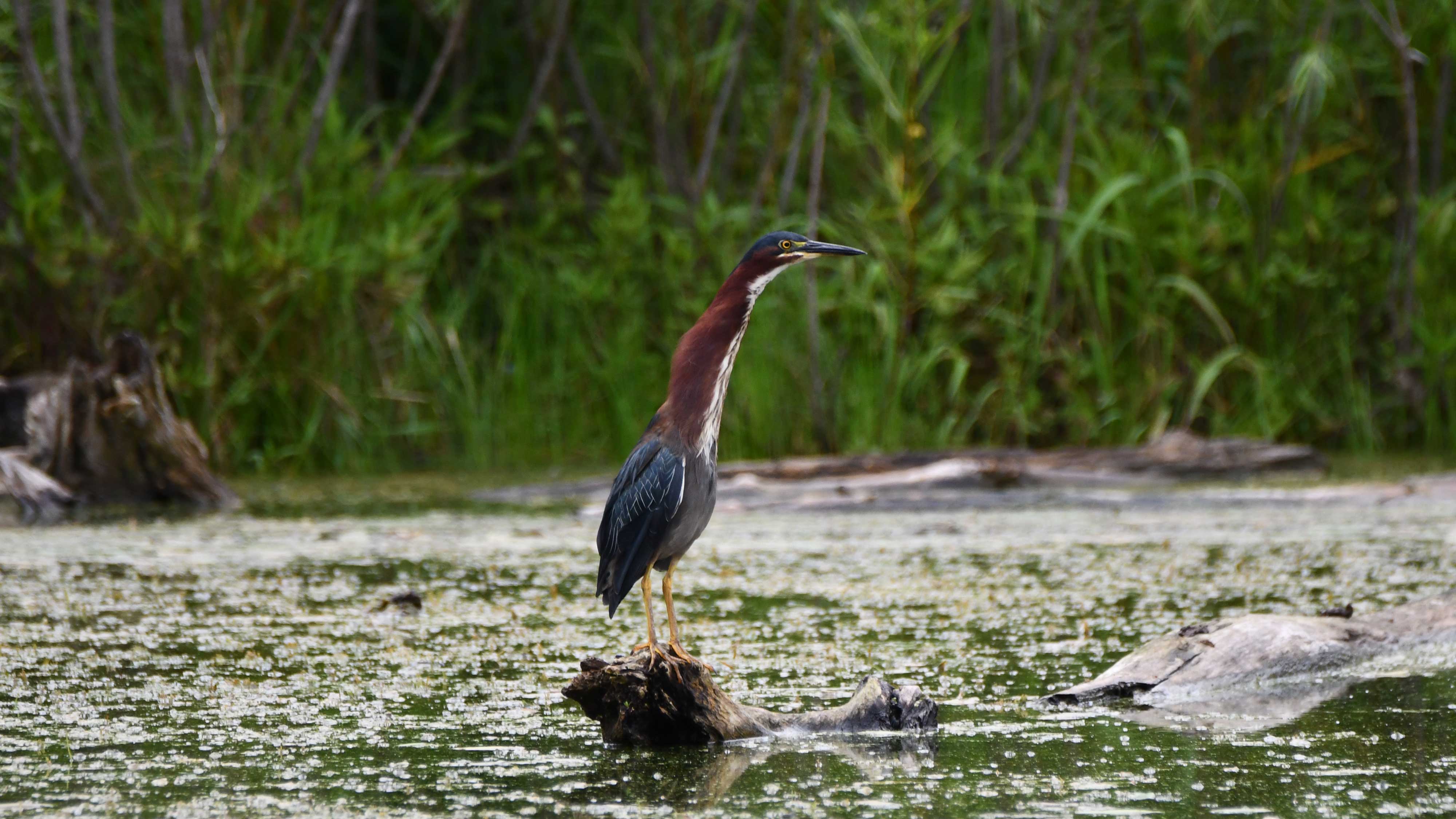 Plant life at the preserve is as diverse as the wildlife. In the spring, the preserve comes to life as plants wake up and re-emerge from the long winter. Summer blooms add pops of color to the green landscape, and then a color of a different sort starts to creep into the wooded areas as fall takes hold.

The Rock Run Greenway Trail cuts through Rock Run Preserve and is suitable for many recreational activities, including running, hiking, biking and in-line skating. On snowy winter days, the preserve is a good spot for cross-country skiing or snowshoeing. 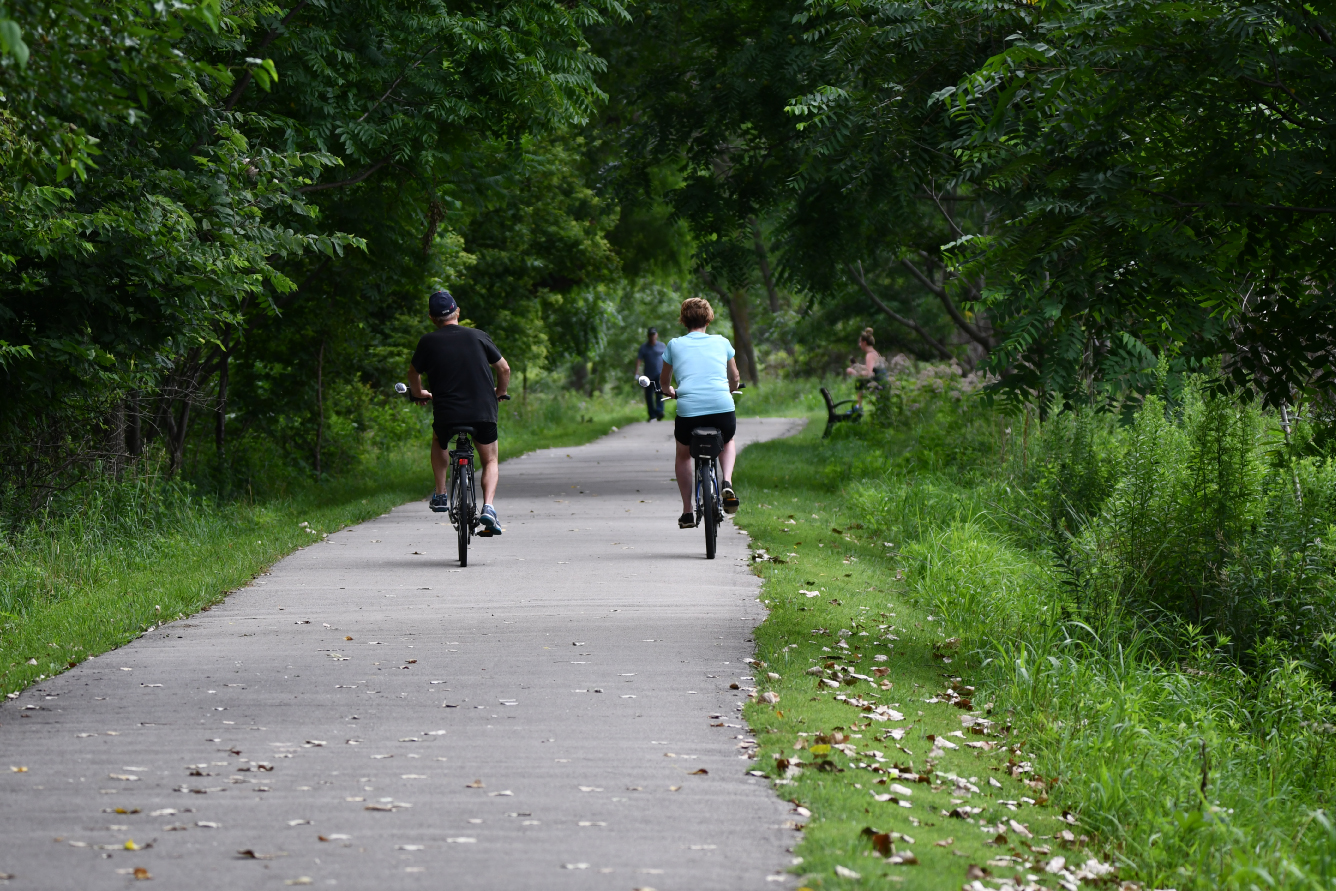 The preserve also has a 0.52-mile crushed limestone trail that connects to the paved trail on either end. This trail is suitable for jogging and hiking as well as winter recreation. It also provides easy access to a quarry pond where anglers can fish or visitors can enjoy the scenery and wildlife. 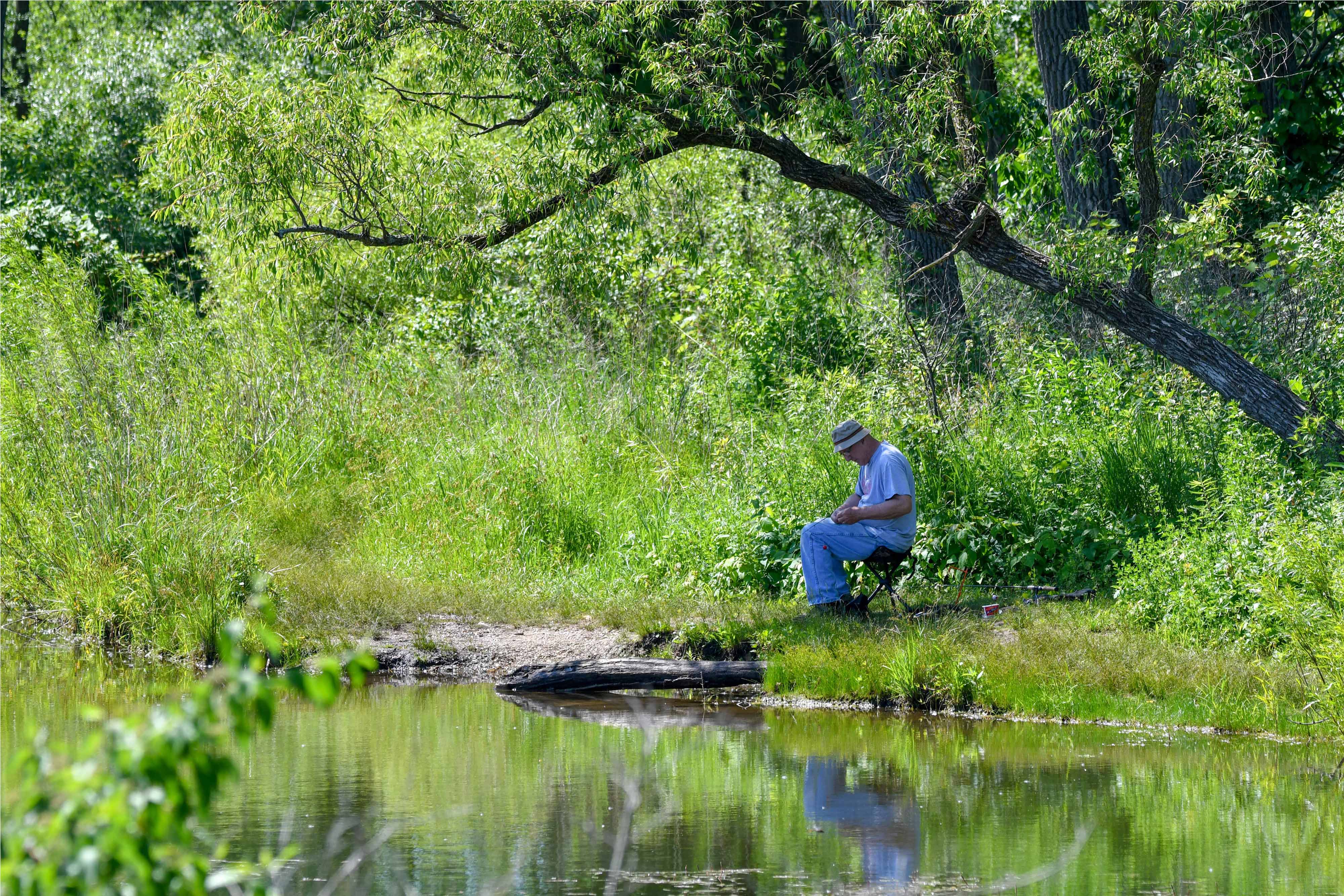 Geocaching is allowed at Rock Run, but a permit is required. The preserve is also home to one of five District-sponsored geocaches. Anyone who finds the geocache will get a take-home souvenir of their adventure.

Both preserve access points have picnic shelters. The Black Road Access Shelter can accommodate 60 people and can be reserved for the day. The shelter at Paul V. Nichols Access can be used by groups of up to 25 on a first-come, first-served basis. It cannot be reserved.