At one time, it was a German prisoner of war camp

Purchased in 1931, McKinley Woods, in Channahon, is one of the oldest preserves owned and managed by the Forest Preserve District of Will County. It also is distinguished by its history, used as a Civilian Conservation Corps camp in the 1930s and, briefly, a German prisoner of war camp in 1945. In the first 100 days of his presidency, Franklin Roosevelt pushed through legislation that became the New Deal, created to combat the crippling Great Depression that had left 13 million unemployed – nearly 25 percent of the work force – and to provide relief to a suffering population. By its third year, the Depression had led to bread lines and soup kitchens, and to shantytowns – dense little towns of tents and small shacks that sprung up on the outskirts of cities across the nation to shelter the homeless.

One of the most significant new programs to emerge during Roosevelt’s first 100 days was the Civilian Conservation Corps (CCC), a huge public works’ initiative designed to promote environmental and conservation projects and to build good citizens through vigorous, disciplined outdoor labor. Hundreds of CCC camps were established in every U.S. state, most of them in national parks.

“Roosevelt’s Tree Army,” as it was called, involved the Department of Labor, which recruited men between the ages of 18 to 25; the War Department, which clothed and trained enlistees for two weeks; and the Department of Agriculture, which developed and managed specific work assignments. In the first two months following its passage by Congress in March 1933, 250,000 men had been recruited. In the camps, they were provided with breakfast and then sent out for eight hours of manual labor. Lunch was often brought to them in the field. In the evening, 80 percent of enrollees took advantage of a variety of classes ranging from literature to welding. Over the nine years of its existence, the CCC taught 400,000 illiterate men to read and write.

Some 2.5 million men would work for the CCC between 1933 and 1942. Enlistees had to be unemployed and unmarried. They enlisted for a duration of six months, but many reenlisted when their terms were up. Most earned $30 a month and were required to send $25 back home to their families.

In Illinois, about 50 camps were established, employing 6,600 men.

One of these camps was erected at McKinley Woods. 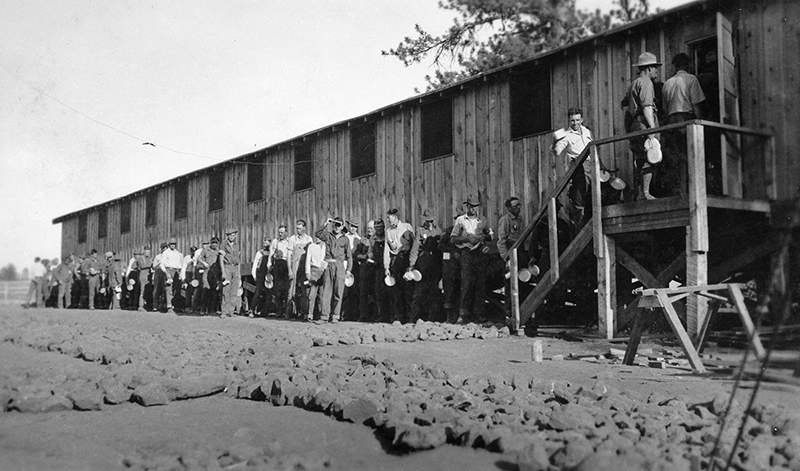 It, along with seven other CCC camps in the state, was located near the I&M Canal. Dennis Cremin, professor of History and Director of the Lewis University History Center, wrote that the CCC developed “bridle paths, foot trails, trailside shelters, comfort facilities, and boat docks, in addition to planting trees and shrubbery and constructing picnic accommodations” along the canal.

The CCC was never intended to be a permanent government program and, as employment opportunities improved, the number of camps dwindled by the end of the decade as young men found higher paying jobs. By the time the United States entered World War II, the program came to a close in 1942. The legacy of the CCC continues to live on in the hundreds of campgrounds, hiking trails and swimming holes still enjoyed by Americans today.

Frederick’s Grove shelter at McKinley Woods is a remnant of the CCC camp.

Just a few years later, a very different use of McKinley Woods surfaced.

By the end of World War II, more than 500 POW camps had been established across the country, holding about 460,000 German prisoners. Most of the camps were established in rural areas in the south, reportedly because “of the higher expense of heating the barracks in other areas.”

Just weeks after the surrender of Germany in April that brought an end to the European campaign, the Forestry Improvement Committee of the Forest Preserve District of Will County Board of Commissioners met to discuss leasing McKinley Woods and the abandoned CCC camp to the Army’s Sixth Service Command as a prisoner of war camp. Several area industries had petitioned the Board of Commissioners to bring 350-400 POWs to work in their facilities. Prisoners would come from Camp Thornton, in the Sweet Woods Forest Preserve, to relieve overcrowding there. Part of the Forest Preserves of Cook County, Sweet Woods is located near 184th Street and Cottage Grove Avenue in Thornton, Illinois.

The Geneva Conventions, which defined the rights of wartime prisoners, required that POWs be paid American military wages if they were put to work on American farms or elsewhere to address the country’s labor shortage, and these local businesses, Joliet Chemicals and Joliet Industrial, sought to conscript prisoners to address their labor needs.

A special meeting of the Board of Commissioners occurred about June 10 of 1945 to consider the businesses’ appeal. They offered to improve the former CCC barracks and mess hall at McKinley Woods.

The Board approved the lease agreement on June 22. It was good for 90 days, subject to renewal if there was still a manpower shortage. The lease fee was $1 per year.

Brigadier General John T. Pierce, commanding officer at Ft. Sheridan, announced the opening of the new POW camp the next day. About 350 German POW’s would be transferred from Camp Thornton. Captain James B. Moon was put in charge of the POW camp in Channahon, to be called Camp Brandon-Morris. With the formal agreement, soldiers and employees from Joliet Chemicals and Joliet Industrial went to work renovating the former CCC structures.

The first transfer of prisoners, about 100 in number, arrived on June 26, and another 150 were brought in the next day. All were enlisted men and, as The Herald newspaper reported, soon fell into a camp routine. They indulged in sports activities, and several were put to work as typists in the camp office. The camp was surrounded by high barbed wire fencing and guarded by overseas’ veterans.

On August 18, 1945, just three days after the surrender of Japan, Joliet Chemicals and Joliet Industrial terminated the use of German POWs at their facilities in order to hire civilians and returning soldiers.

After just two months of operation, Camp Brandon-Morris was shut down and abandoned. Left behind was about $15,000 in improvements on the land and buildings of McKinley Woods. According to The Herald, Roy W. Hendriksen, chairman of the Board of Commissioners, announced that the Forest Preserve “fared even better than we had hoped for. Not only did the POWs clean up the forest preserve area, but all the buildings were re-wired, water was installed and one building was enlarged to include wash basins and shower stalls. For the slight inconvenience caused by closing the area to the public during July and August, the Forest Preserve board was well compensated.”

While the Civilian Conservation Corps and POW internment camps have passed into history, McKinley Woods endures, and its connection to these two momentous periods of American history endures as well.