Home to one of the largest rookeries in Illinois, this preserve is a birding paradise

Lake Renwick Preserve is a bird paradise for both birds and birders.

Birds like herons, cormorants and other species flock in droves to nest on islands in a lake at the preserve, and that makes the site a big draw for those who want to get a glimpse of these birds. In the past few years, even our national emblem — the bald eagle — has been seen with regularity at Lake Renwick.

The preserve, in Plainfield, is 839 acres in all and is part of the Lily Cache Creek preservation system which conserves about 1,000 acres. Lake Renwick has three access areas: Copley Nature Park, Heron Rookery Nature Preserve and Turtle Lake Access. Copley Nature Park and Turtle Lake Access are open year-round, but Heron Rookery Nature Preserve closes from March 1 to Aug. 15 each year to protect the nesting activity of migratory birds in the preserve. The rookery, one of the largest in Illinois, was dedicated a state nature preserve in 1992 to provide permanent protection for its natural resources.

The District acquired the land for the preserve between 1989 and 2010, but it has a much deeper history in the Plainfield community. In the early 1900s, the property was a rock quarry owned by a succession of gravel companies. The quarry filled with water when steam shovels used in the quarrying operation hit a spring, allowing water to flow in. The gravel company that owned the land at the time turned it into a recreation area for swimming and fishing, and the property also at times in its history housed a dance hall and a skating rink. During that time, the site also served as an ice emporium in the winter, with 25,000 tons of ice being harvested each season. Ice harvesting continued at the site until 1924, when a fire destroyed the icehouse.

Today, the birds are the big draw at Lake Renwick, said Jen Guest, recreation coordinator for the Forest Preserve District.

“The birds reclaimed the area once the quarry filled with water,” she said.

The birds inhabiting the nesting islands get most of the attention, but they are just some of the birds found at the preserve. “Keep your eyes peeled as you travel through the preserve because the tree line is great for songbirds,” Guest said, “and the lakes are a hopping spot for waterfowl.” 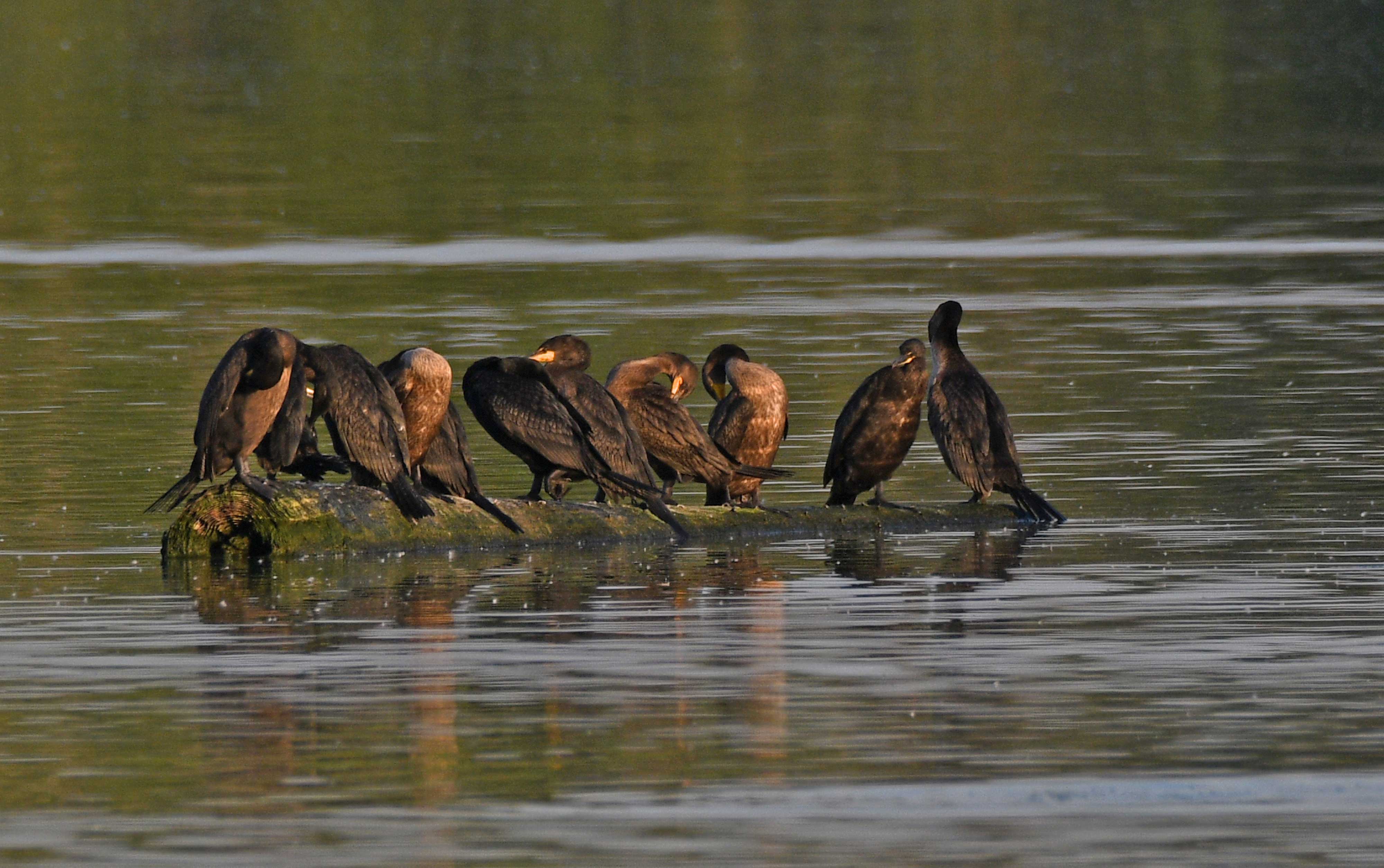 While the birds are the headlining attraction at Lake Renwick today, in 2008 a different animal was drawing headlines — an alligator. Yes, that’s right. In 2008, an alligator was spotted at Lake Renwick Preserve. It took five days to trap the alligator, which was thought to be a pet released by an owner who no longer wanted it, and it was eventually transferred to the Chicago Herpetological Society.

Joel Craig happened to be at Lake Renwick the day the alligator was spotted for his job as a freelance photographer, and his involvement in that escapade is what led him to begin volunteering for the District.

For Craig, the preserve feels like home because it kind of is. Craig grew up literally across the street from the preserve, in a house his parents still live in today.

“We spent a lot of time as kids sneaking around in there back in the ‘70s when it was still an active gravel quarrying operation,” he said. “While we spent most of our time fishing, it was impossible not to notice the large numbers of herons and egrets in the area.”

His visits to Lake Renwick these days are more on the up and up, serving as a volunteer interpreter at bird viewing programs held at the heron rookery and in various other capacities as a District volunteer.

“I always try to make personal connections with visitors, understand their reasons for visiting or find what interests them, and then engage with them on a level that will hopefully result in them learning something new or at least being excited about something experienced,” he said. 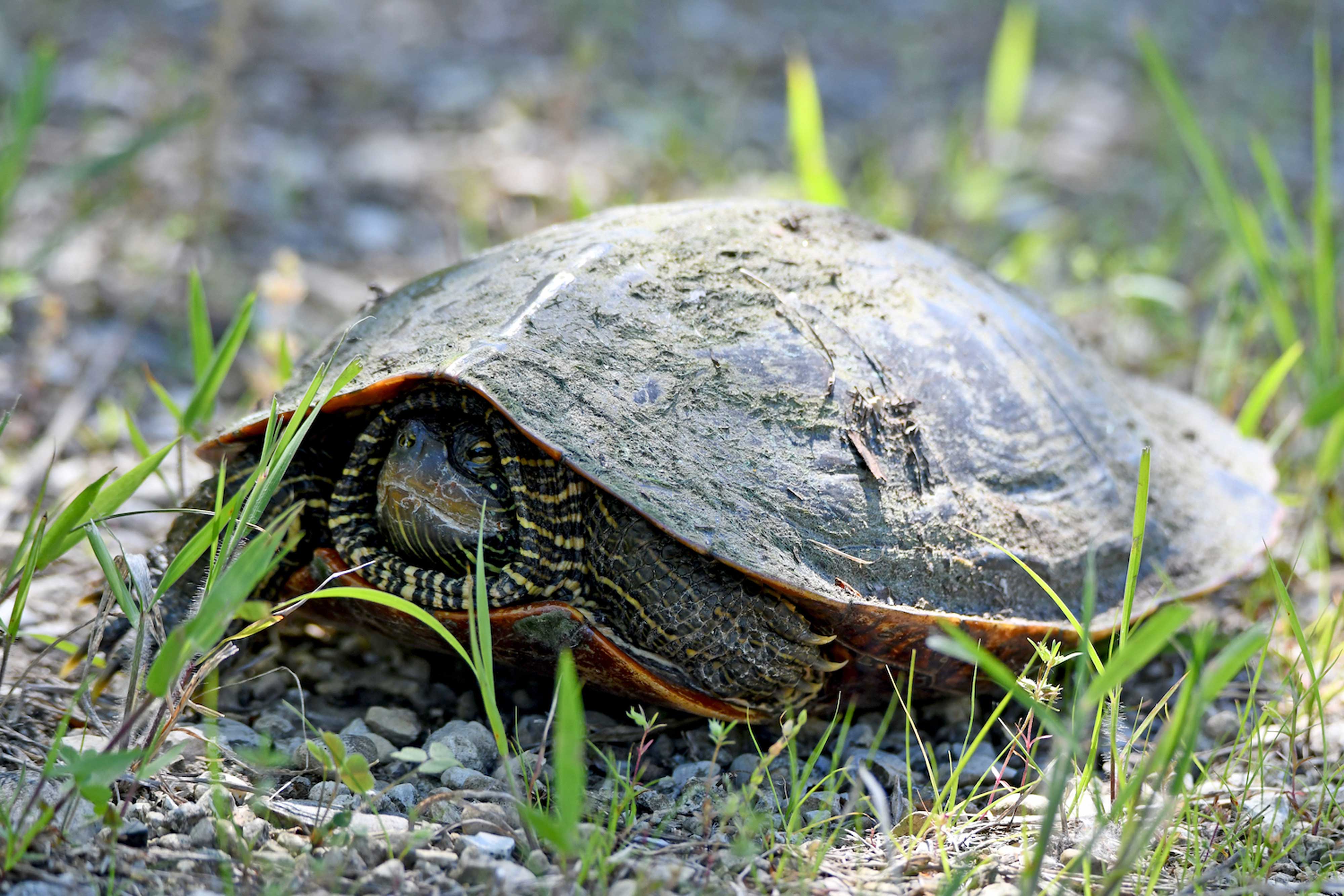 Because of its varied habitat areas, including wetlands as well as grassy and wooded areas, Lake Renwick is a nice place to watch the seasons change. In particular, the trees along the trails and lakes tell the story of the year, from barren to lush green to dazzling color to barren once again.

In the summer, prairie plants and wildflowers dot the grassy areas, and that pop of color transitions to the treetops come fall.

“It’s a nice place to hike in the fall to see all the colors of the trees,” Guest said.

Wildlife at the preserve includes many of the usual suspects when it comes to mammals — deer, raccoons, squirrels, chipmunks, rabbits and the like.

Dozens and dozens of bird species have been recorded at Lake Renwick, but the birds populating the islands at the rookery have evolved through the years.

Today, about two-thirds of the nesting birds are double-crested cormorants, but 30 years ago no cormorants nested at the preserve, Craig said. Great blue herons and great egrets are also common sights on the nesting platforms. Cattle egrets used to be seen there, but it’s been about a decade since any have been spotted. The population of black-crowned night herons, which are state endangered, has also decreased significantly.

Lake Renwick Heron Rookery is closed March 1 to Aug. 15 each year to protect the nesting activities of migratory birds, but you can visit during weekly bird viewings held Saturday mornings during nesting season. You can also get a good view of the birds that call the preserve home from the Copley Nature Park access, which is open year-round.

“Here you can see many of the same birds that nest on the islands,” Craig said. “It’s also a great place to see migrating geese and ducks in the spring and fall.” 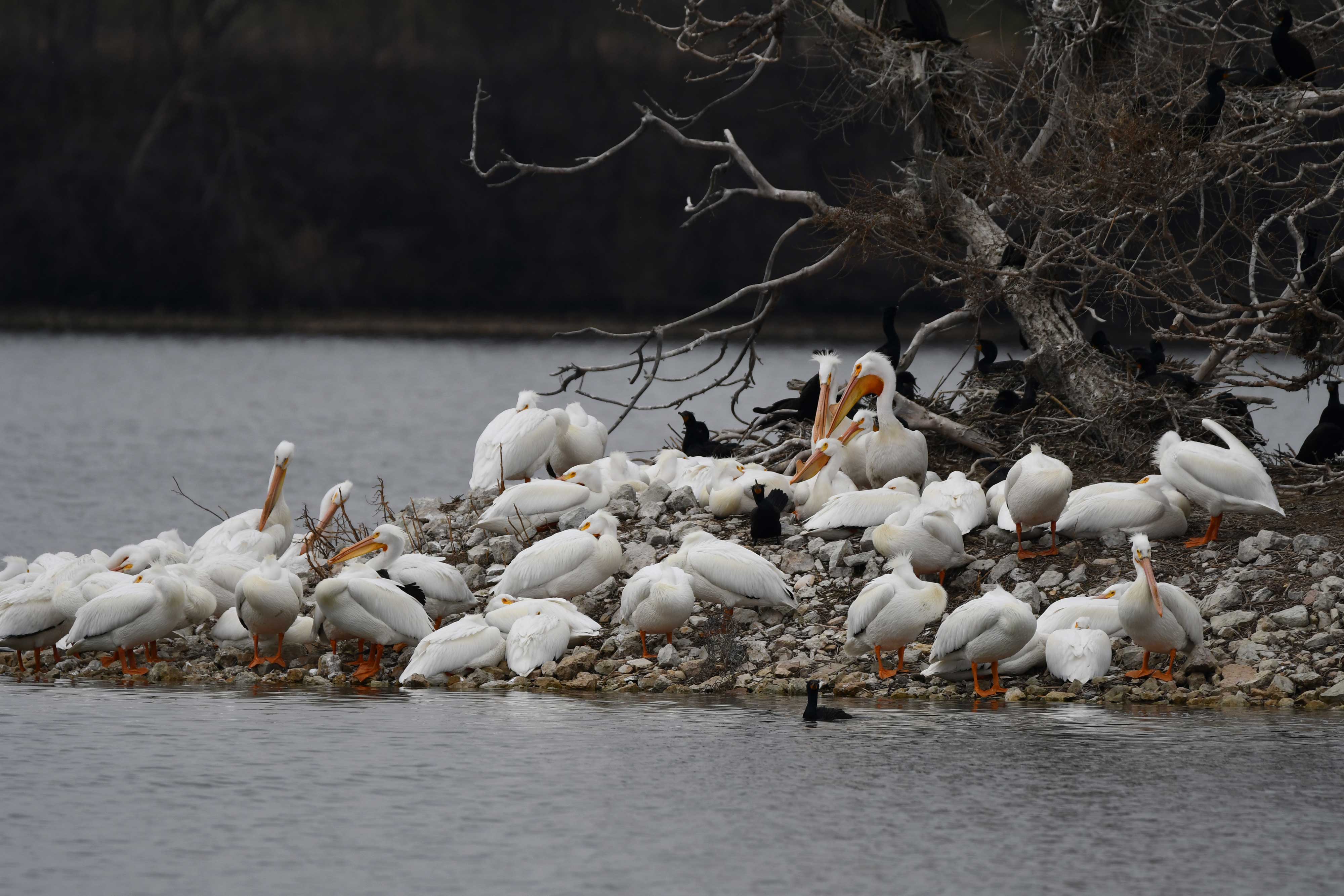 With several lakes in the preserve, fishing is a big draw at Lake Renwick. Shoreline fishing is allowed in designated areas around both Turtle Lake and Budde Lake, but it is not allowed at the Heron Rookery because of its nature preserve designation.

The trails at the preserve also make it a popular place for biking, running and hiking, as well as cross-country skiing and snowshoeing in the winter. At the rookery, a 1.45-mile crushed limestone Heron Rookery Trail loops through the habitat areas and brings visitors to the viewing area overlooking the lake and the nesting platforms on the islands. Biking, cross-country skiing and snowshoeing are not allowed in this area of the preserve.

Guest said one of her favorite hiking routes is from the Lake Renwick Heron Rookery into the Turtle Lake Access area and back, and she also likes to walk around Budde Lake because it’s such as pretty lake. 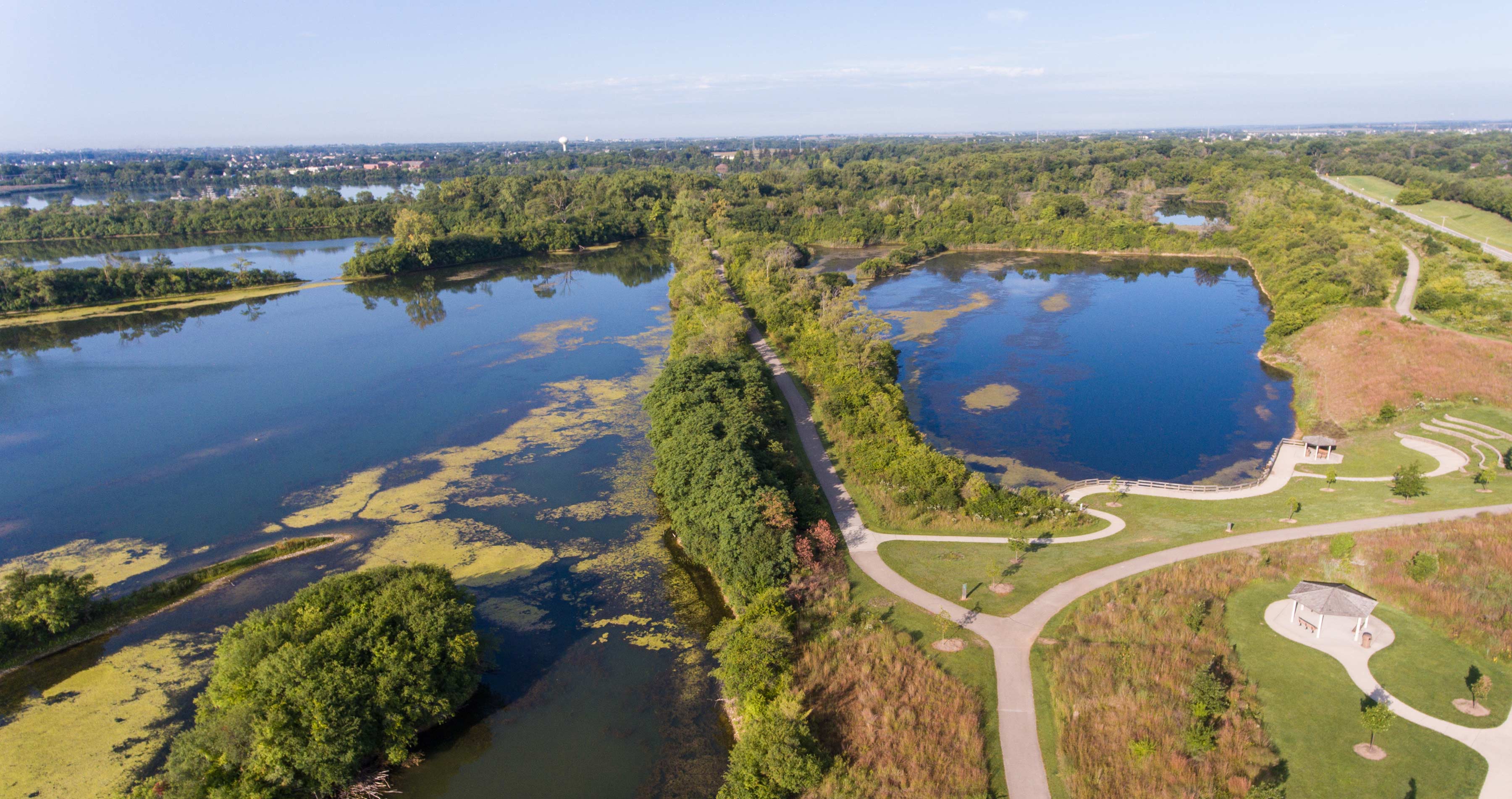 An aerial view from the Turtle Lake access. (Photo by Chad Merda)

The Heron Rookery Trail connects to the paved Lake Renwick Bikeway, which travels 3.35 miles through the preserve’s Turtle Lake Access. Biking, hiking, running, in-line skating, snowshoeing and cross-country skiing are all permitted on the bikeway,

The preserve regularly hosts birding programs, including weekly bird viewings at Heron Rookery Nature Preserve on Saturday mornings from April to mid-August, when this access point is otherwise closed to the public.

CHECK OUT ALL UPCOMING EVENTS ON THE EVENT CALENDAR

Lake Renwick is one of several preserves where geocaching is allowed. Geocaching in the forest preserves requires a permit, and this activity is allowed only at Turtle Lake Access at Lake Renwick.

One word of caution for preserve visitors: Lake Renwick is home to ticks, chiggers and other biting insects that can ruin a good time outdoors.

“Some good bug spray is a must, and everyone should determine how much they feel they need to cover up,” Craig advised.