Dragonflies are one of the few insects that draw appreciation rather than ire. We don’t shoo these creatures away, like we do flies and mosquitoes, but rather watch them closely, admiring their beauty and intricate flight patterns.

These long-winged creatures date back more than 300 million years and were among the first winged insects to evolve. Today, their wingspans range from 2 inches to 5 inches, but fossilized dragonflies have been found with wingspans as big as 2 feet.

Dragonflies are exceptional fliers, with the ability to fly straight up and down as well as hover in the air like a helicopter. They even mate in flight, which is why we sometimes see two dragonflies that appear conjoined. Without the ability to fly, dragonflies wouldn’t be able to eat, because they catch their prey in flight, grabbing it with their feet, Smithsonian magazine reports.

Dragonflies primarily eat other, smaller insects, which gives them an important role as a predator in the food chain, particularly because they consume disease-carrying insects such as mosquitoes and some fly species.

Illinois is home to 98 dragonfly species, according to the Illinois State Museum. The species are divided into seven families: clubtails, cruisers, darners, emeralds, petaltails, skimmers and spiketails. Like other insects, dragonflies go through three life stages: egg, larva and adult. Adult females lay their eggs in the spring, typically in floating plant debris. The larvae emerge three weeks later, feeding on aquatic life for about 11 months. Once matured, the nymphs walk out of the water, split from their skin and emerge as adults with wings. The adults remain near their water habitats, but spend most of their time over land.

Here’s a closer look at some of the dragonflies commonly seen across Will County and some of their key features and traits. 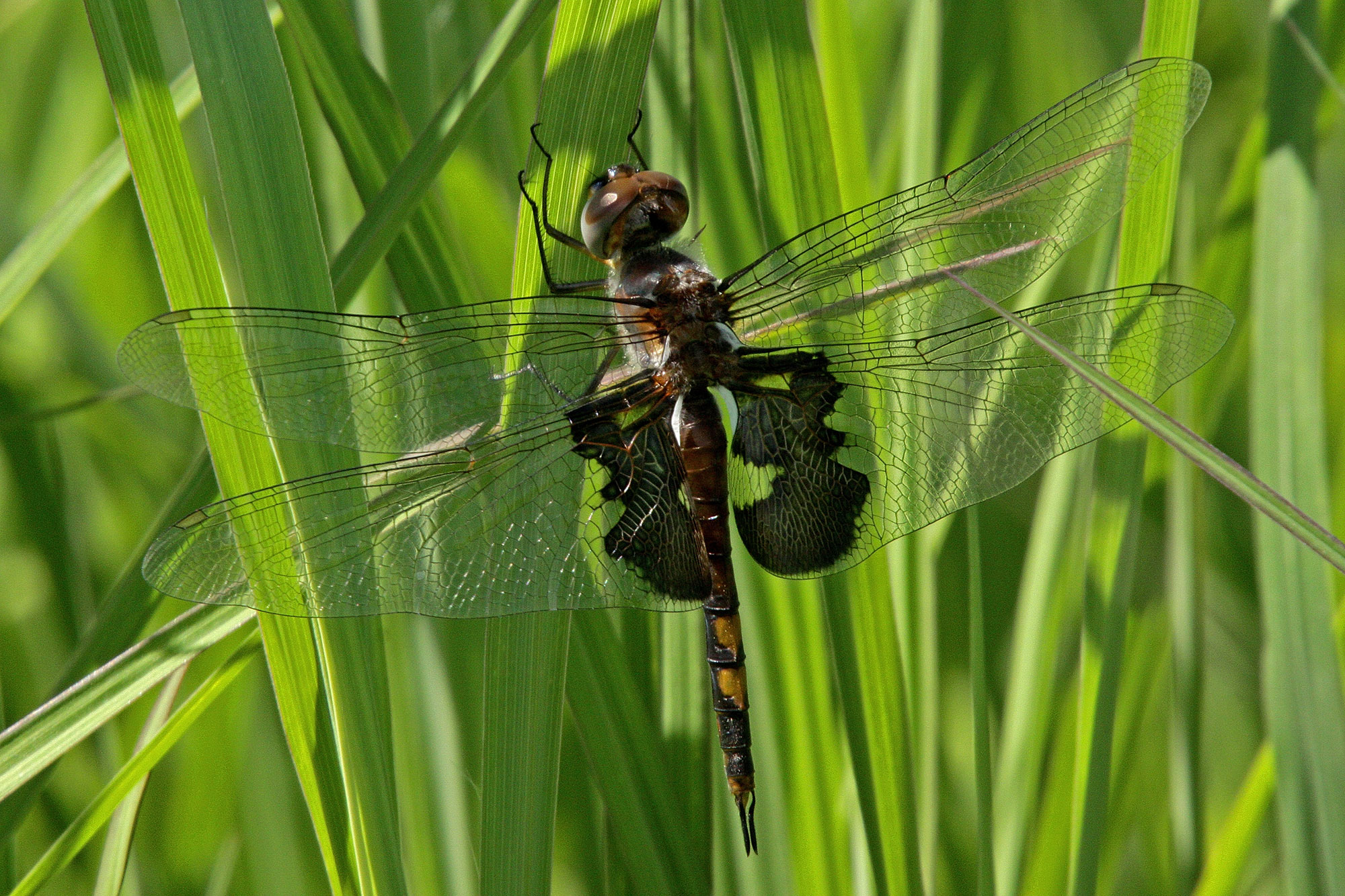 The black saddlebags dragonfly gets its name because its back wings, or hind wings, have dark black patches near the body that give the appearance that it is carrying saddlebags, while the rest of the wings are clear. The males have black bodies, while the females are bigger and have a yellowish-white pattern of spots on the back of their abdomens. Black saddlebags are found throughout much of the United States and Mexico and typically live near stagnant or slow-moving bodies of water, such as small lakes, ponds and ditches. 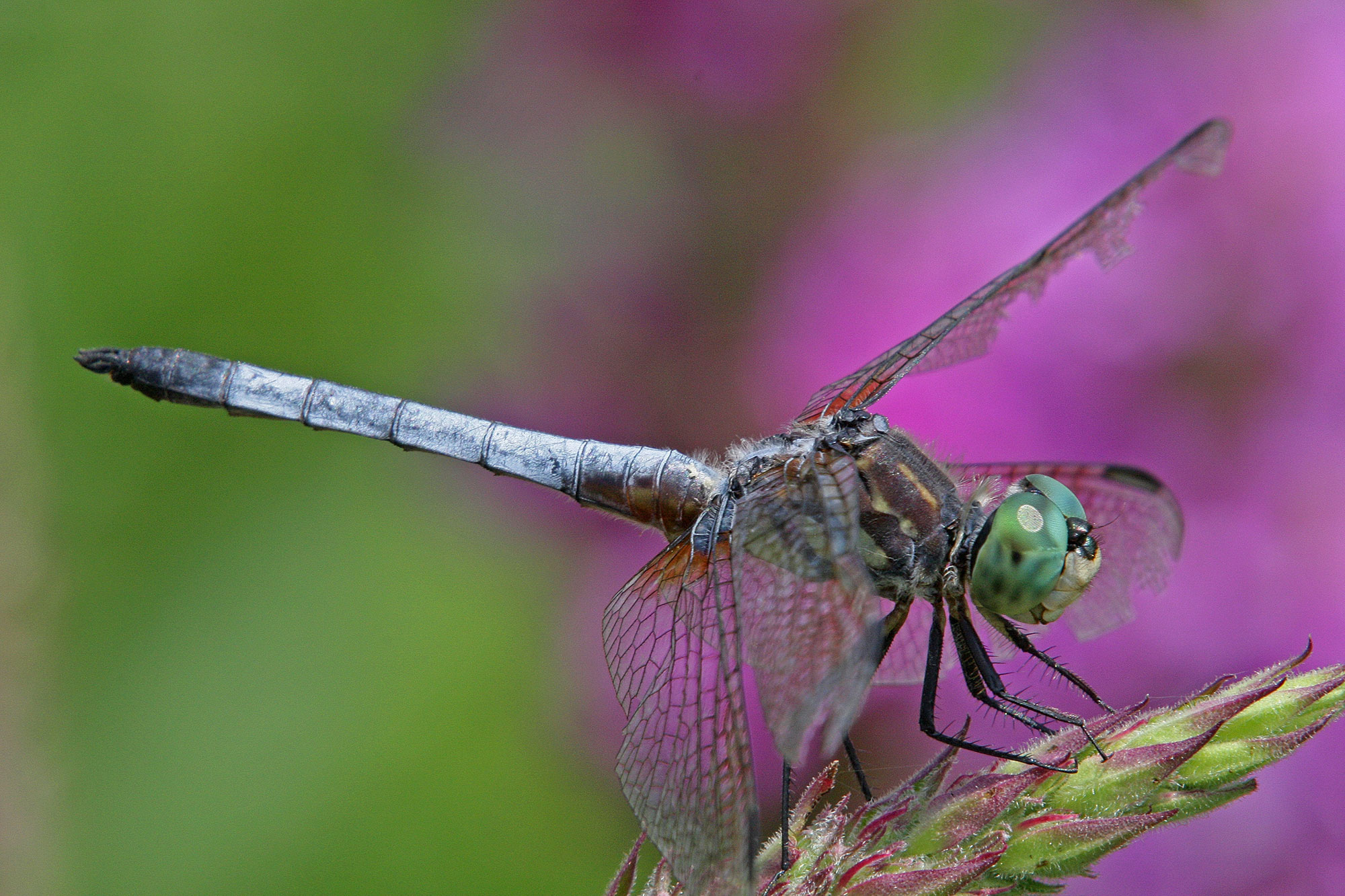 The blue dasher is, as you might expect, a brilliant blue color that often catches the eye. Both males and females typically have clear wings, although the male’s wings may sometimes have a dark brown stripe. Males and females can most easily be distinguished by the eyes, which are bright blue or green in males and reddish-brown in females. The females also typically have a shorter abdomen than the males. These dragonflies are found in good numbers throughout much of the United States, and they prefer quiet and still bodies of water, such as marshes, ponds, ditches, lakes and slow streams. 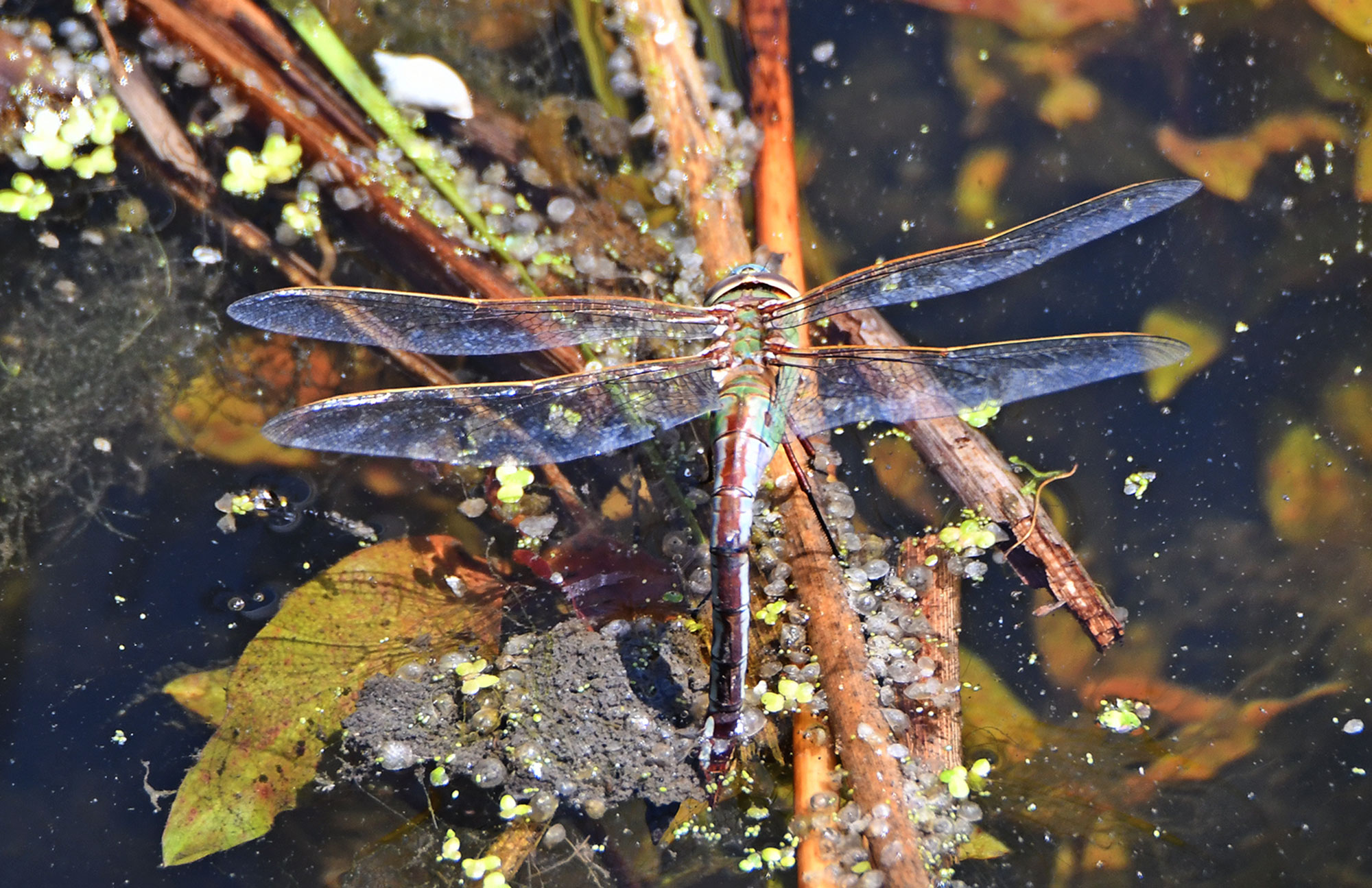 The common green darner gets its name because its abdomen looks similar to a darning needle. Both males and females have clear wings with yellow costa, which is the main vein that runs along the edge of the wings. Both males and females have light green faces, but the bodies differ. Males have primarily blue abdomens that are green on the segment closest to the head, while females have brownish-green or brownish-red abdomens. Green darners can be found throughout the United States as well as parts of Mexico and Canada, and they are typically found near bodies of water with ample vegetation, including lakes, bays, ponds and slow-moving streams. 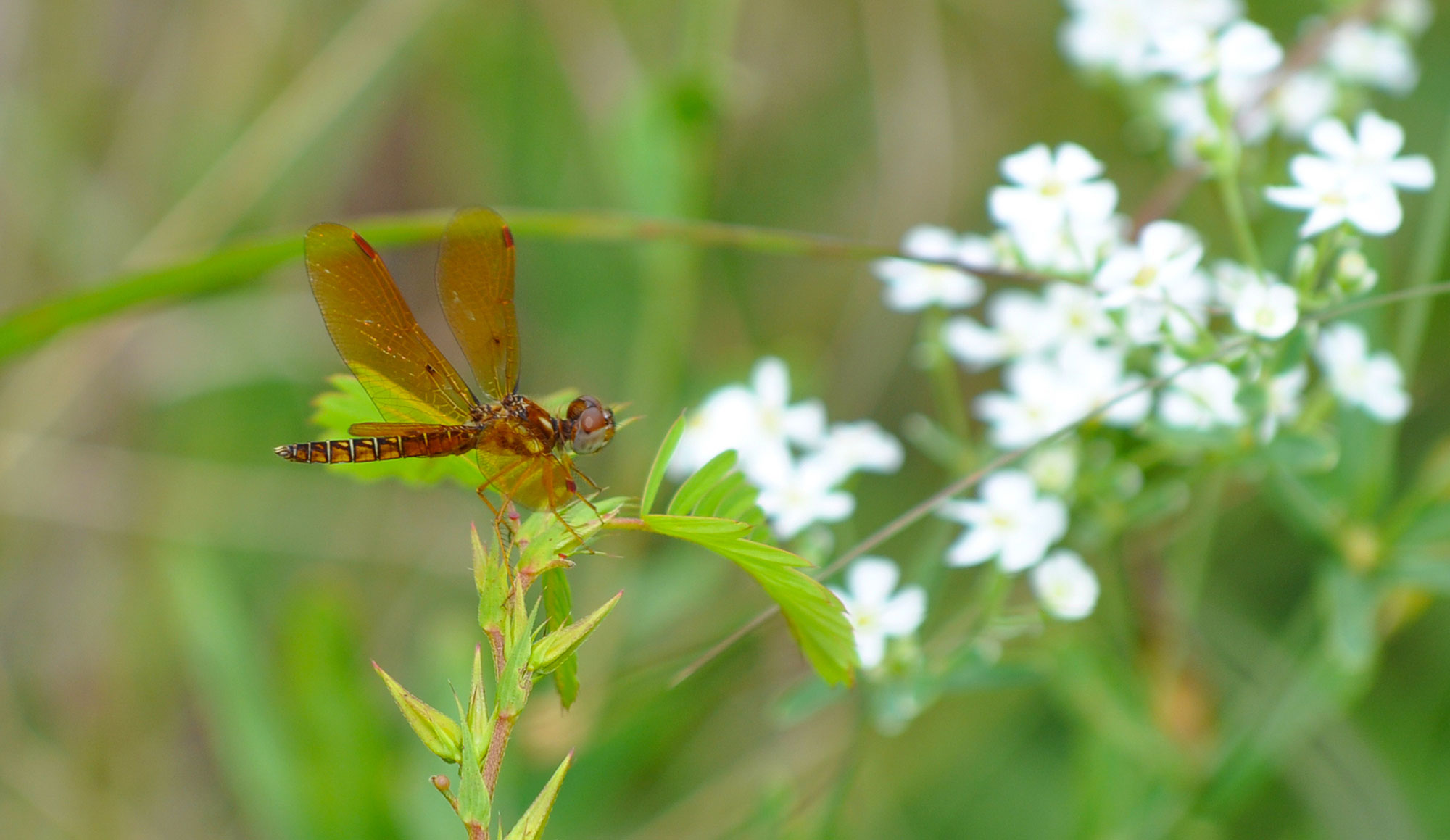 The eastern amberwing is yellowish-brown in color, and its name is derived from its amber-colored wings. Males and females can be differentiated by their wings. The females have amber wings with brownish spots or stripes, while males have wings that are amber with no other markings. The eastern amberwing is commonly seen in the central and eastern United States as well as parts of Canada and Mexico. They prefer open, still bodies of water, such as lakes, ponds, ditches and even pools. 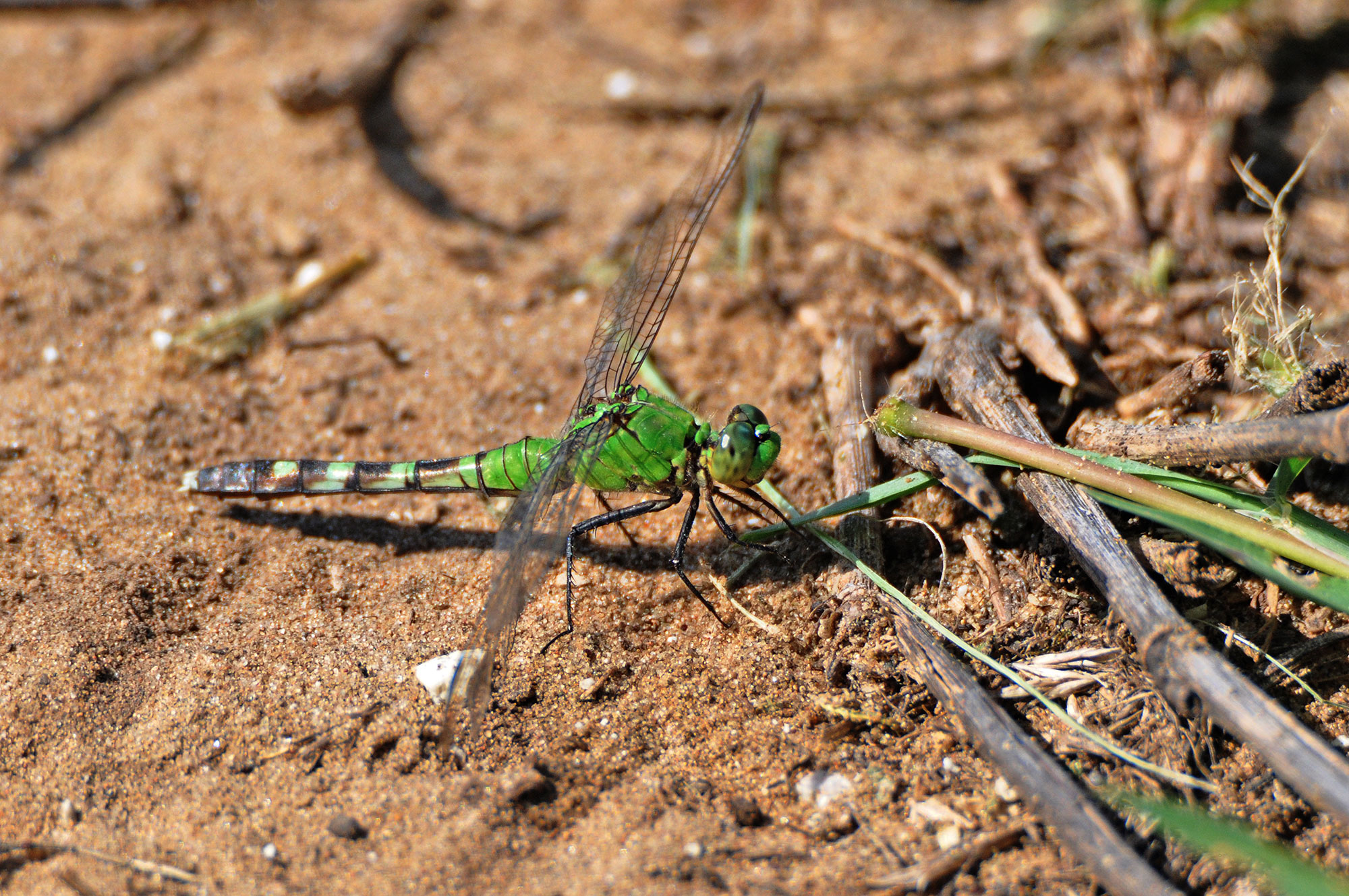 The Eastern Pondhawk is recognizable by its bright green face. The wings of both the males and females are clear and appear lacy black. Males and females can be distinguished by their bodies. Females are green with black markings on the abdomen, while males have light or powder blue abdomens and thoraxes. The Eastern Pondhawk is one of the most widely distributed dragonflies in the eastern United States, and can be found near many bodies of water, including lakes, ponds and ditches as well as slow-moving rivers, creeks and streams. 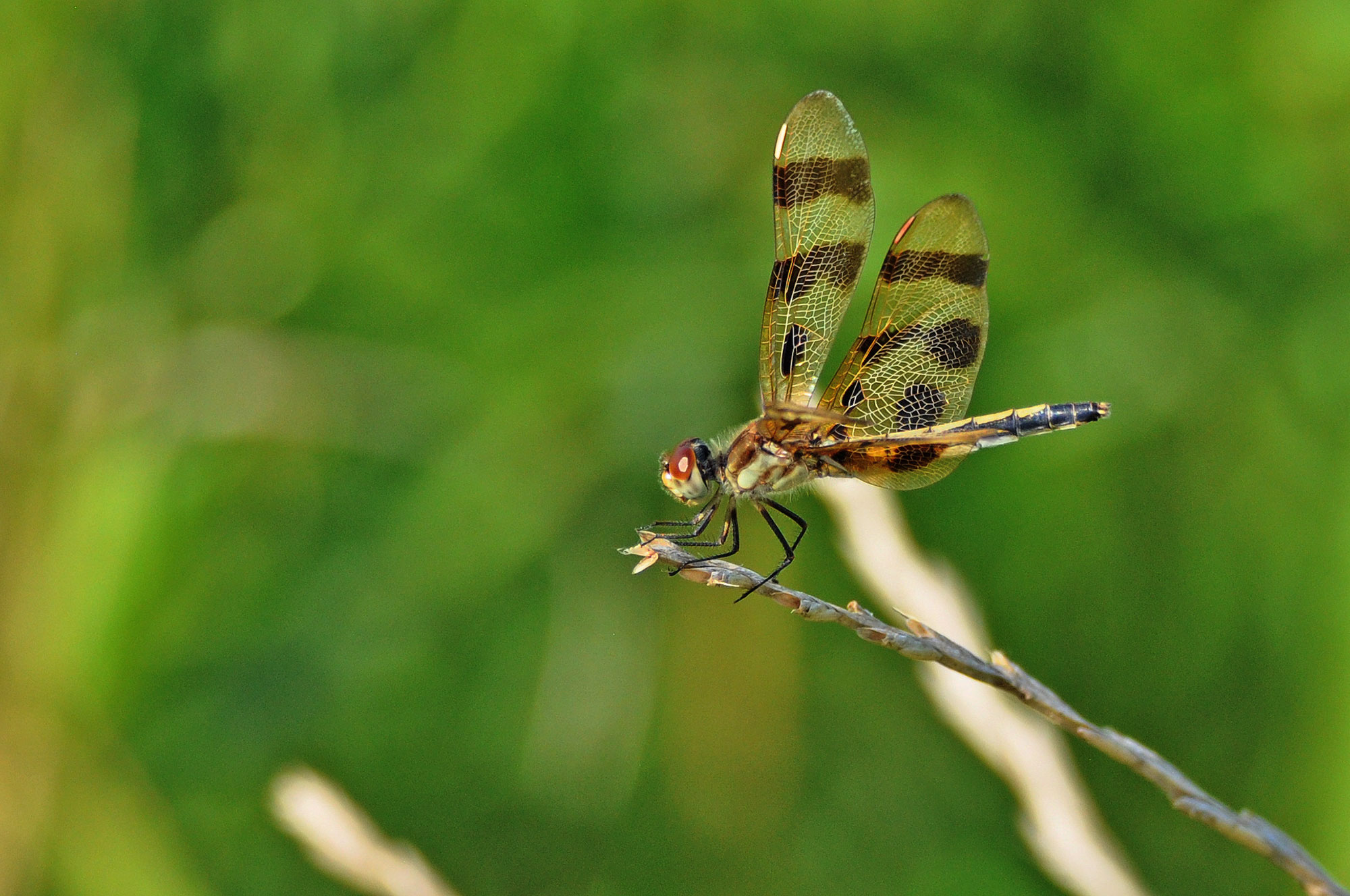 As you might expect, the Halloween pennant dragonfly gets its name from its coloring, primarily it orange wings that feature dark brown or black bands. Females typically have yellow markings on their faces and a yellow abdominal stripe and wing veins, while the males start with yellow marking that turn more red as they mature. They are found throughout the eastern United States and typically live near lakes, ponds and marshes, where they are often seen resting on the tops of plants near the water’s edge. Halloween pennants are considered exceptional flyers and can remain in flight during rain and strong winds. 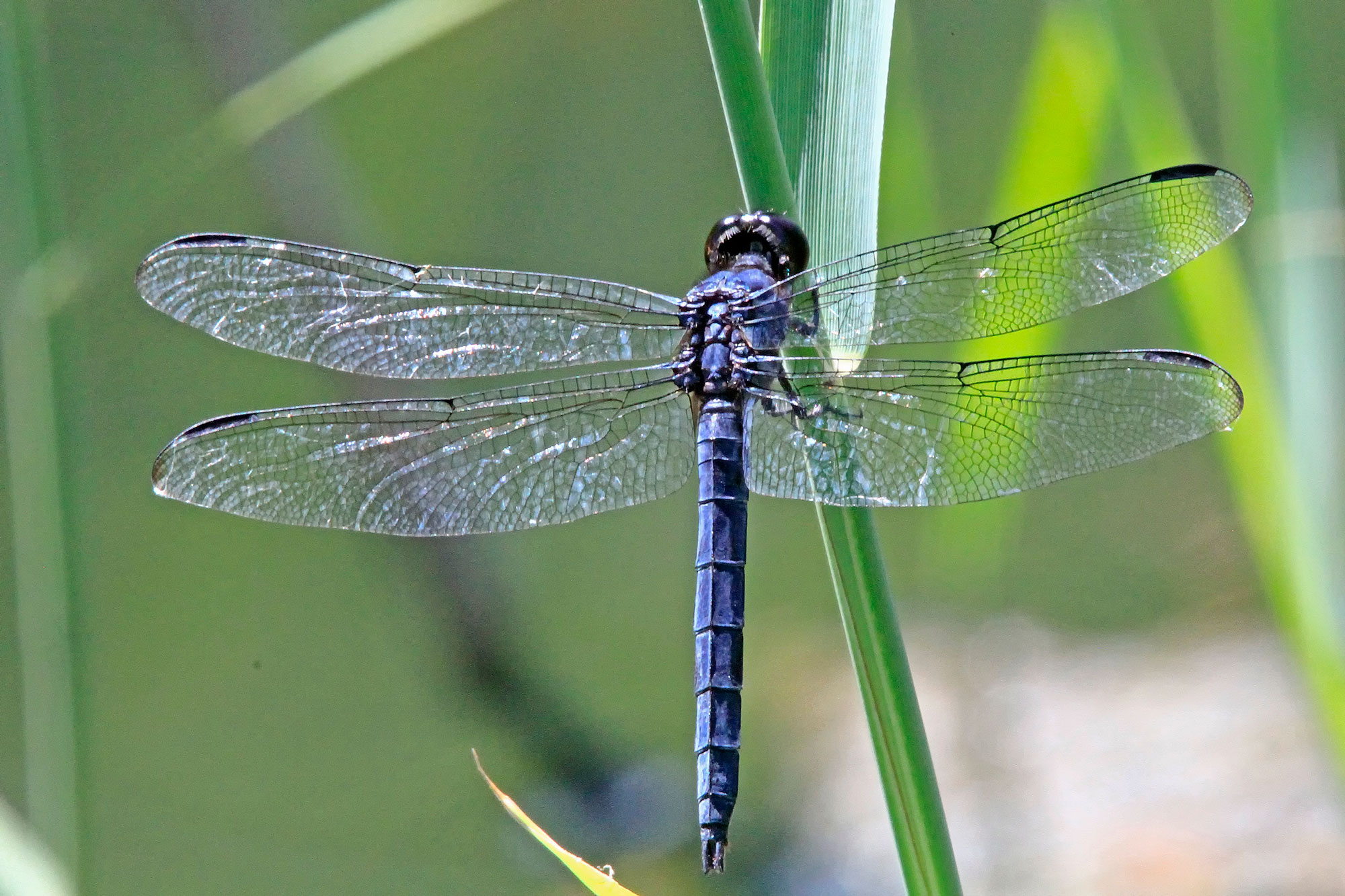 Male and female slaty skimmers are similar in appearance, making them more difficult to distinguish in the wild. Both males and females have brown or tan faces and dark-colored heads and bodies absent of any other distinguishing features. Both also have clear wings that sometimes have spots at the tips. Slaty skimmers are found throughout the eastern United States and Canada, preferring to live near marshy lakes and ponds and slow-moving steams and creeks that have mucky bottoms. While males are typically found near vegetation at water’s edge, the females typically stay away from water except while mating and laying eggs. 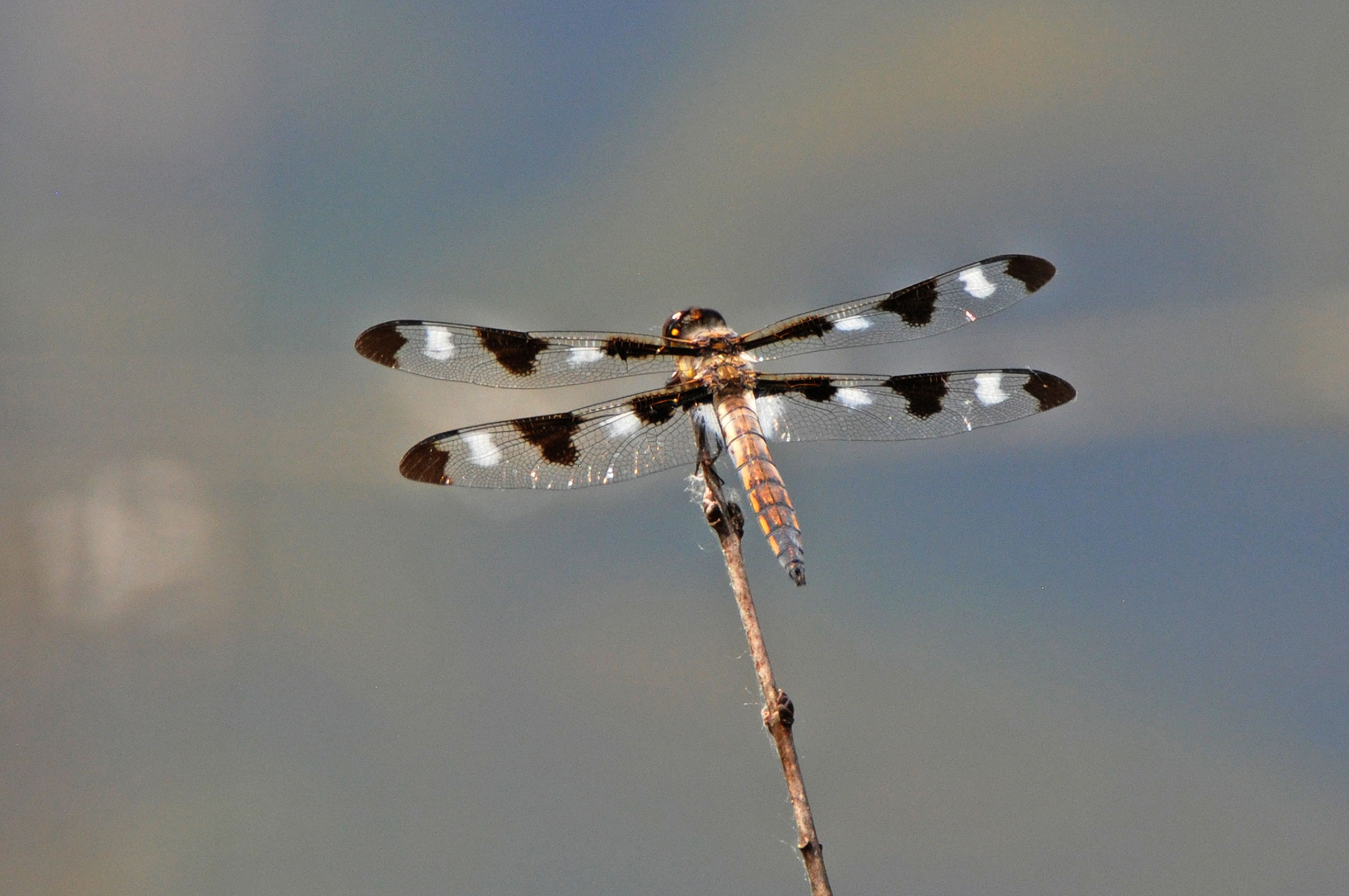 Twelve-spotted skimmers have one of the most distinctive wing patterns among dragonflies. The name refers to the 12 brown spots that appear on the wings, three spots per wing. Males and females are easy to distinguish because of their spots. Females have only the 12 brown spots, while males have white spots that appear between the brown ones. Twelve-spotted skimmers can be found throughout the contiguous United States and typically live near shallow lakes, ponds and marshes as well as slow-moving streams. 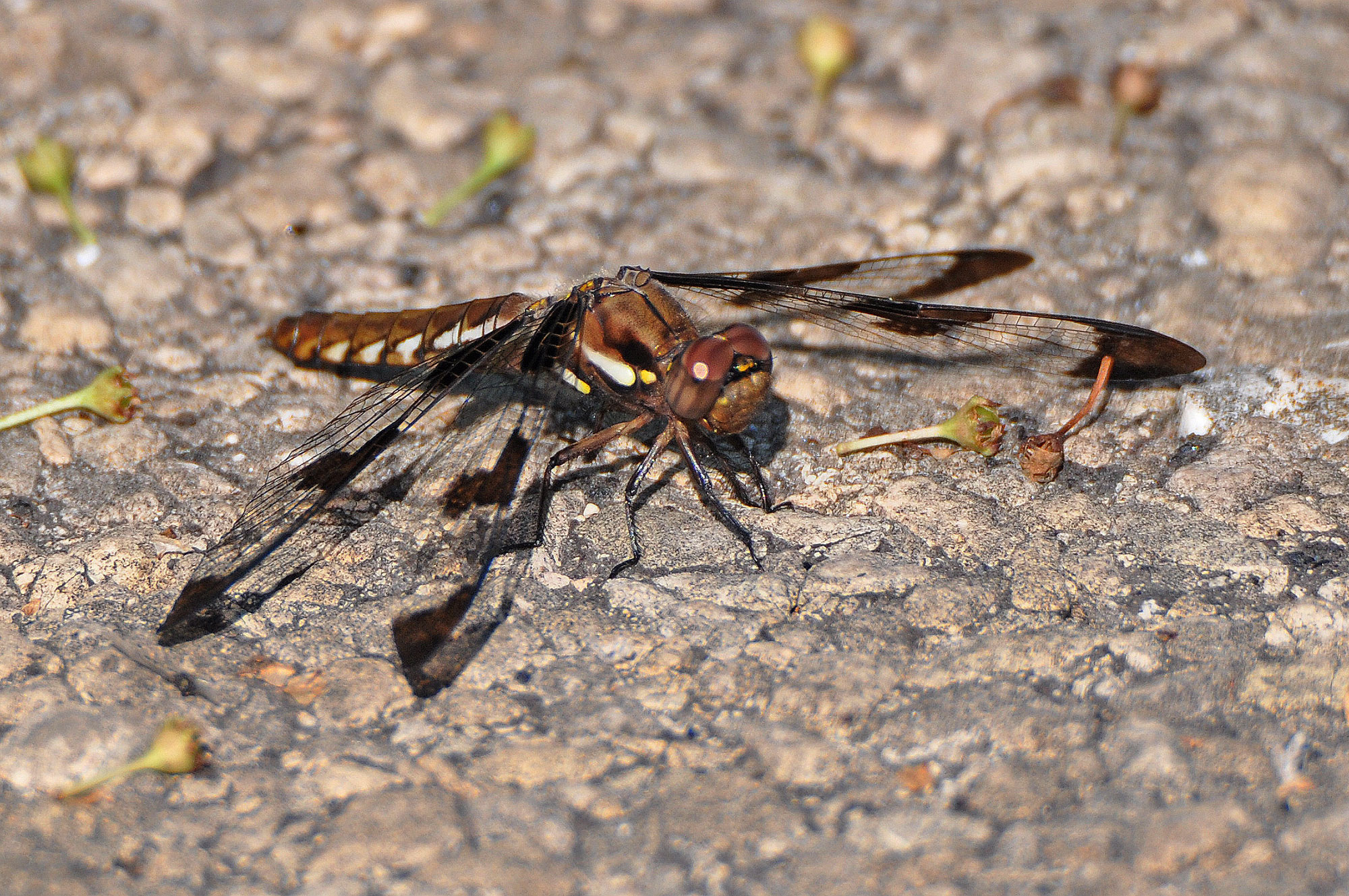 As the name implies, white-tail skimmers are most easily recognizable from their white tails. Males and females are most easy to distinguish by their wings, with the males have large black or brown bands on the outside of each wing and the females having less obvious markings, typically three smaller spots on each wing. These dragonflies can be found throughout the United States and southern Canada and live near just about any type of aquatic environment, including lakes, ponds and streams. 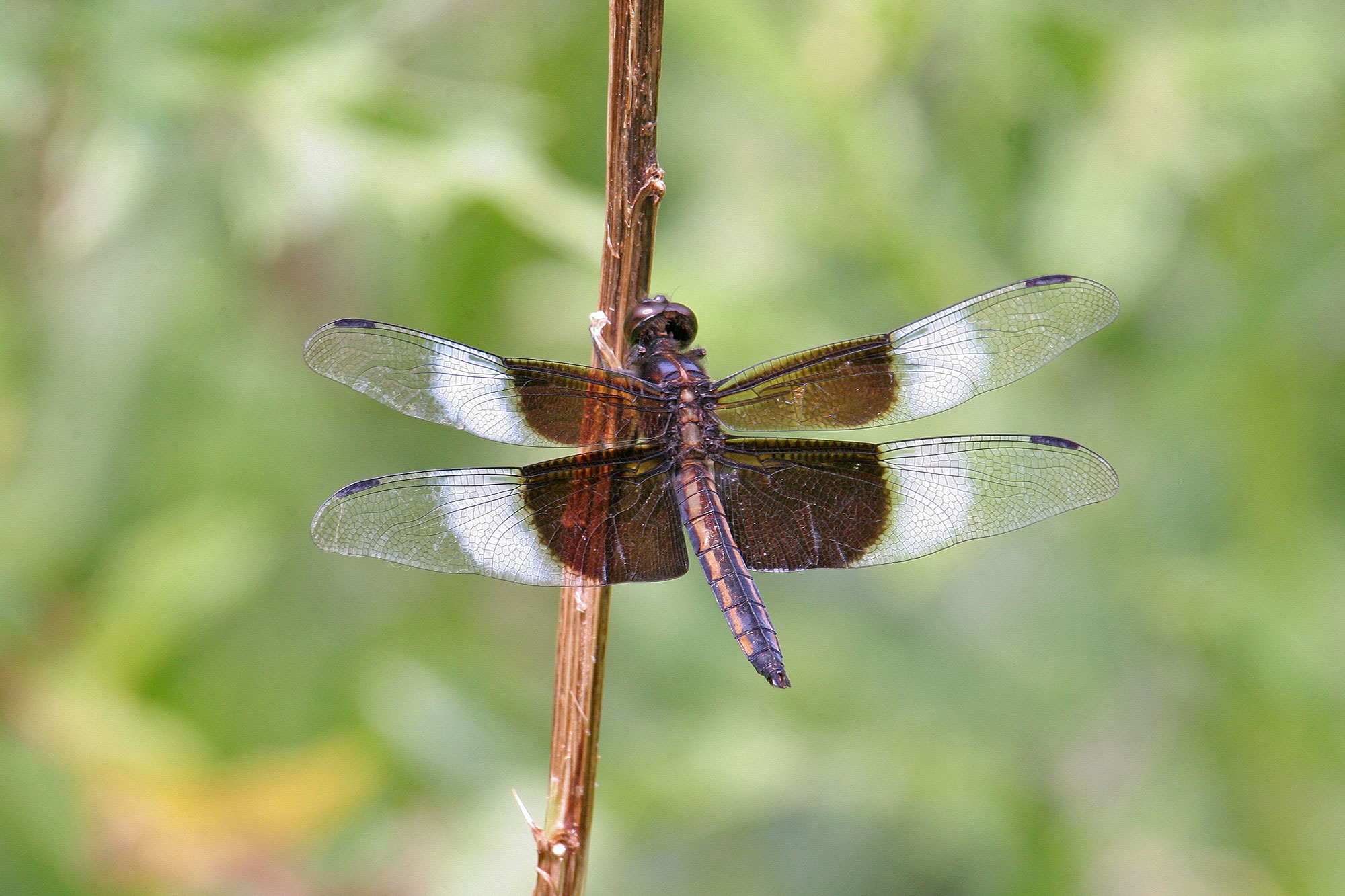 Widow Skimmers can be identified by the large dark brown or black bands on their wings. Both the males and females have these dark bands, but the males also develop white bands on the outside of the wings, making it easy to differentiate between males and females. The bodies of these dragonflies are powder blue or chalky blue in appearance. They can be found throughout most of the United States, usually near still or stagnant water, such as marshes or ponds.