After peeling back the layers, this unique preserve conserves a piece of the 'City of Steel's' heritage

A Forest Preserve site that opened in August 1998 was hidden by a jungle of vegetation for decades until the Forest Preserve acquired it and peeled back the layers of neglect and decline.

Once the recovery work was completed, amazing relics of a bygone era were exposed and preserved. The 52-acre Joliet Iron Works Historic Site has evolved into a popular stop for history buffs and pedestrians or bicyclists who travel the adjacent I&M Canal Trail and take time to tour the preserve’s .59-mile concrete interpretive trail.

Joliet Iron Works consists of the foundations of a once bustling iron and steel factory, which was created just four years after the Civil War by the Union Coal, Iron and Transportation Company and operated from the 1870s until the 1930s. In addition to the many local quarrying jobs that were available in the area, thousands worked at Iron Works, giving rise to Joliet’s designation as the City of Steel and Stone. 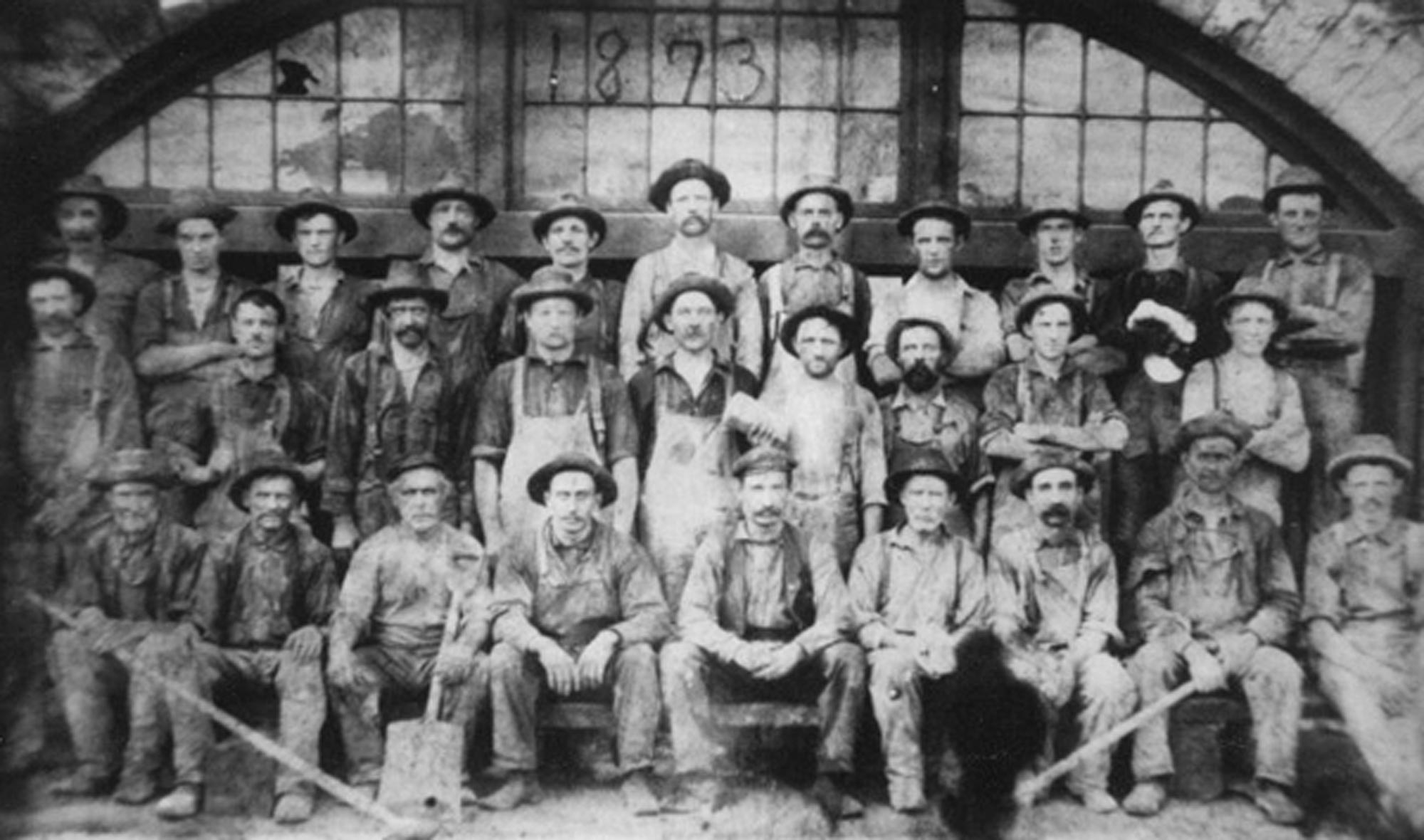 The men who worked at the steel factory contributed to the great industrialization of America. Many of these jobs were filled by immigrants, the first arriving from northern and western Europe and possessing industrial skills.

The plant hummed along for decades, peaking during World War I, until the stock market crash of 1929 ushered in the Great Depression and the ultimate end of the Joliet Works. U.S. Steel closed the facility in 1933 and dismantled the site by the end of the decade. 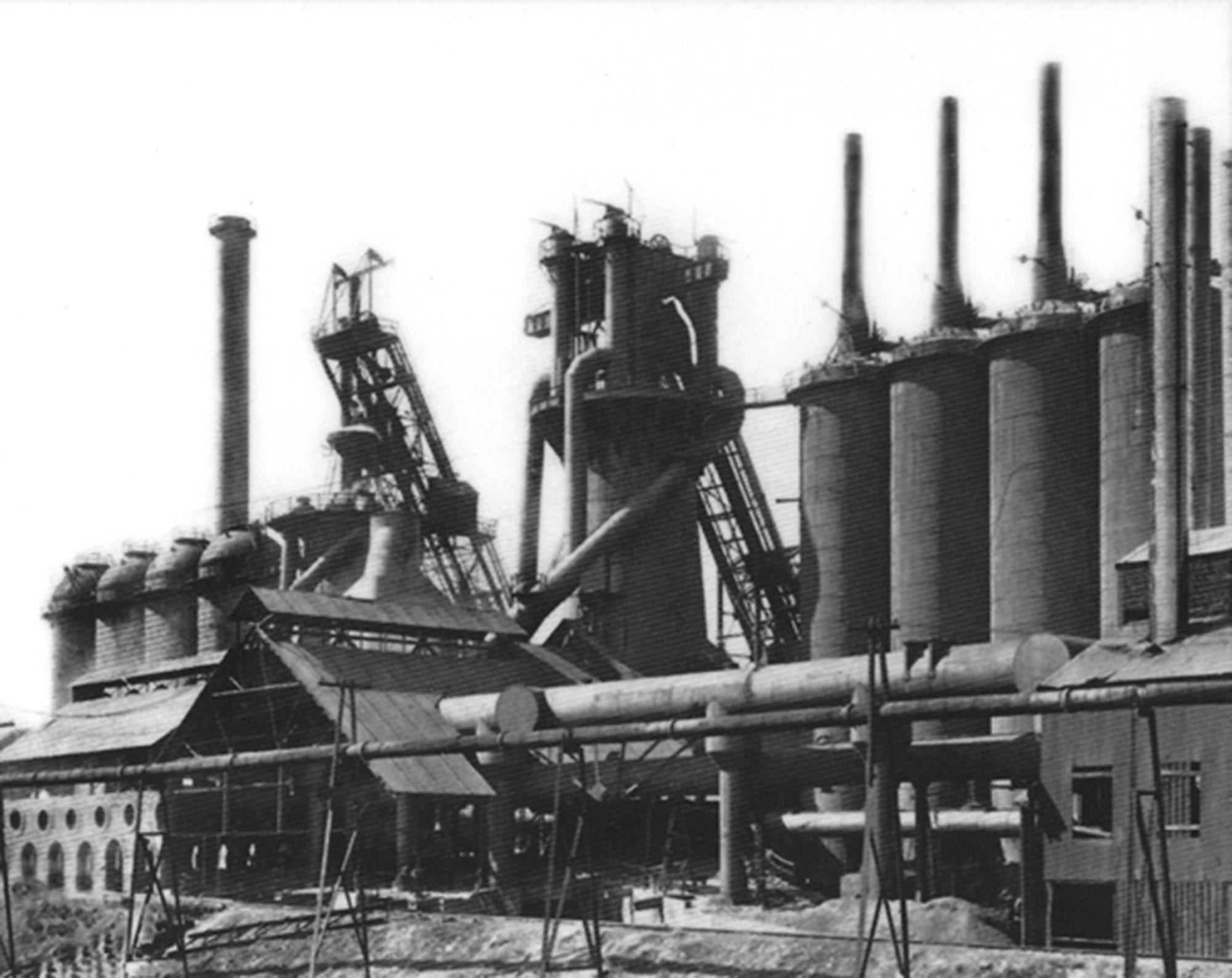 The blast furnaces that operated on the site.

Sifting through the rubble

Fifty years later in 1989, the Forest Preserve entered into an agreement with CorLands to accept a donation of the parcel, which sits at the confluence of the I&M Canal, the Des Plaines River and several railroads. CorLands was a division of a regional land conservation agency known as Openlands.

CorLands received the 45-acre site as a donation from USX Corp, which had moved its main steel factory east from the Iron Works location to Collins Street.

“At that time, the Iron Works site was incredibly overgrown,” said Ralph Schultz, the Forest Preserve’s chief operating officer. “It was a thicket of trees and shrubs, mostly invasive.”

The Forest Preserve’s main goal in preserving the Iron Works was to protect the cultural history of the site, as well as the adjacent I&M Canal and its influence on the development of the Iron Works, Will County, the City of Joliet and Lockport, Schultz explained. Before the railroads were built, the canal’s towpath was used to transport raw materials to the steel factory and other businesses along the route.

A second goal in preserving the site was to have the property serve as an anchor for a new I&M Canal Trail section that was built from the Iron Works to Division Street in Lockport. The trail was eventually extended even farther and now stretches 7.55 miles north to 135th Street in Romeoville, where it connects to the Veterans Memorial/Centennial Trail and Isle a la Cache Museum.

In 1991, when the District took ownership of the Iron Works site, the land and the foundry’s crumbling ruins had to be assessed, Schultz said. An industrial archaeologist was hired to sift through the rubble and the thick layer of earth that had settled over the stone and concrete footprint.

“That was the first glimpse we had of the extent of what was remaining there,” Schultz said. “For instance, we knew where the gas washing plant, the furnace and other components of the manufacturing plant had been located. And based on that, and historical photographs, you could visually reconstruct in your mind what had once been in place.” 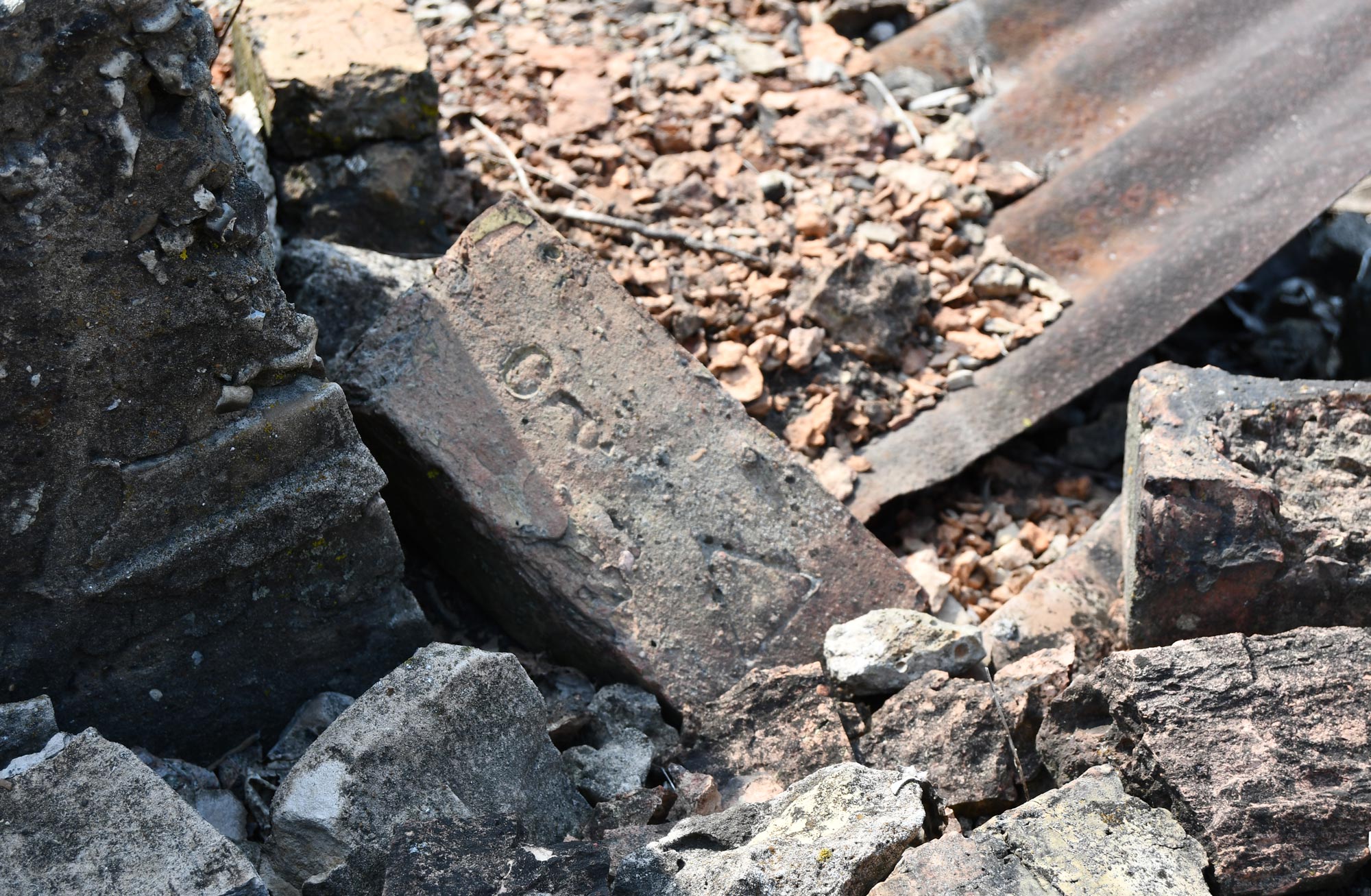 The Forest Preserve applied for and received an Iron Works/I&M Canal Trail grant in 1993. That money, plus the acquisition of an additional 7 acres for a parking lot on Columbia Street in 1996 and 1997, paved the way for preserve construction to begin on Columbia Street, just east of the Ruby Street Bridge.

Six years later on August 1, 1998, a grand opening was held at the site, complete with architectural tours and a family bike ride. Interpretive signs dotting the Iron Works path told the history of the people who worked there and what they made.

Since it opened as a preserve, Iron Works has become a cultural jewel in downtown Joliet that links the city to its industrial past. 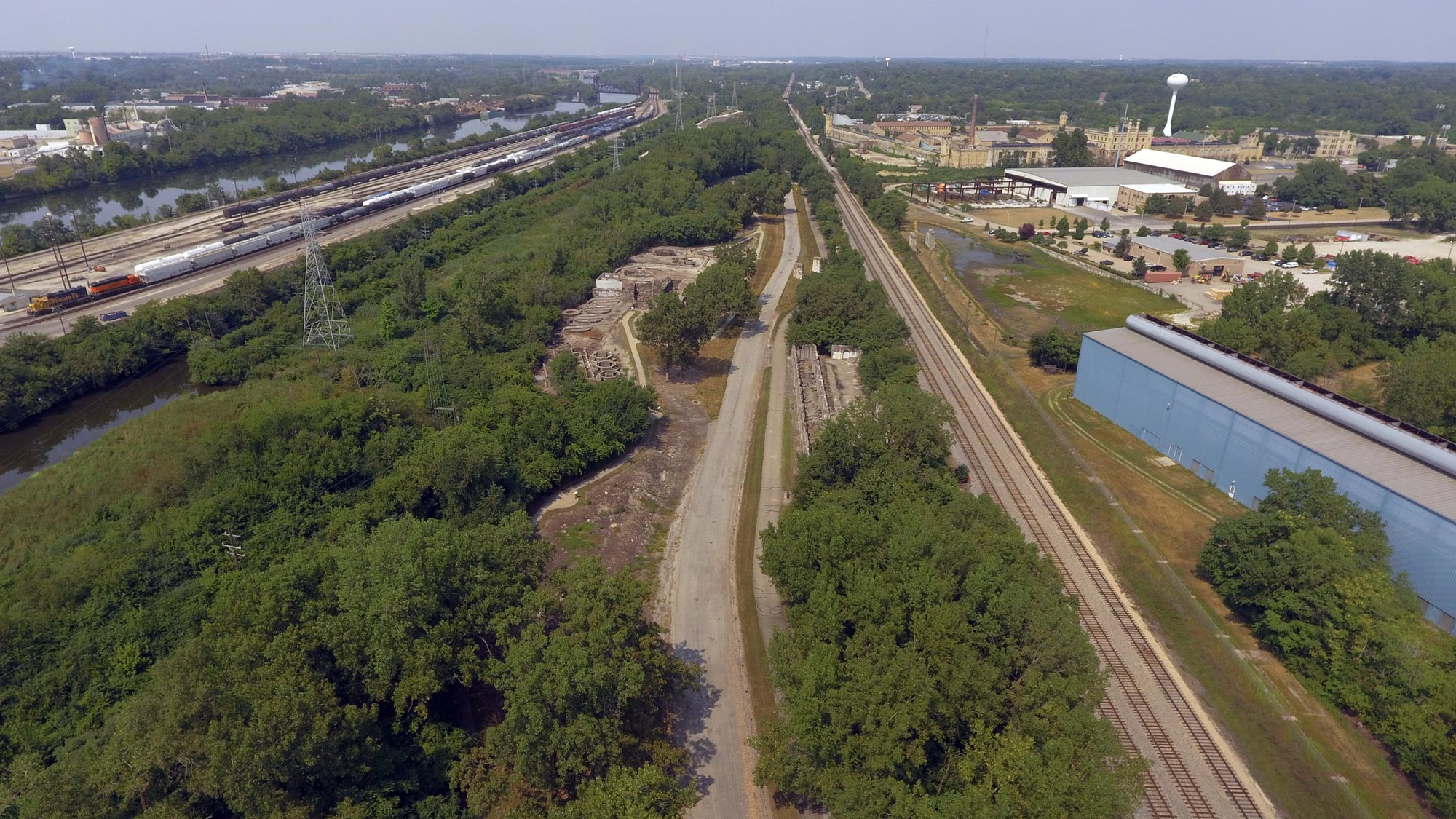 Some who visit the site or sign up for tours had family or friends that worked at the Iron Works or another steel plant back in the day, said Mike Speller, an interpretive naturalist who led tours at the Iron Works. “They want to learn what they couldn’t or didn’t from those people,” he said.

Others who grew up in the area just want to know more about the historic reputation of the ‘big city’ in Will County, he added. And they’re curious to learn more about how the blast furnaces converted iron ore, limestone and coke into steel products.

“On site, with the empty building shells on the other side of the track, and the scale of the foundations in front of them, it’s like going behind the scenes to find out how your shovel or car got made in the first place,” Speller said. 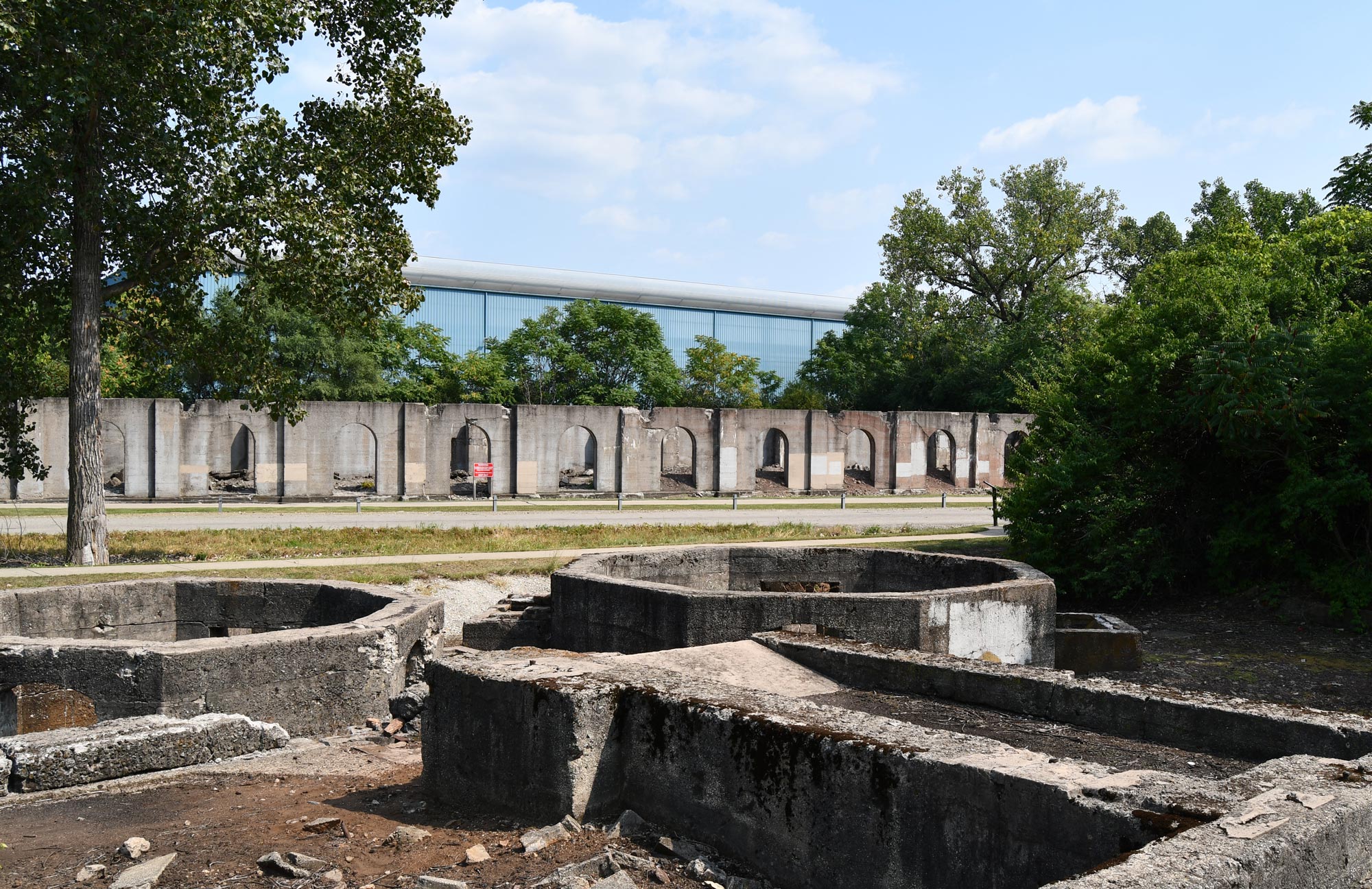 Overall, the Iron Works draws people in because they want to know how these workers produced the materials that industrialized the country.

“People have a fascination for the work environment of the time,” Speller said. “They want to know how workers adapted and took as ‘routine’ the technology and processes that were so hazardous and essentially unregulated. Yet the factory succeeded and financed the city for decades.”

The Iron Works tells an amazing story of how people interacted with the land during this 60-year period, Schultz said.

“I think people are interested in history and they realize they can satisfy that interest close to home and learn something about the evolution of their community by visiting the Joliet Iron Works.” 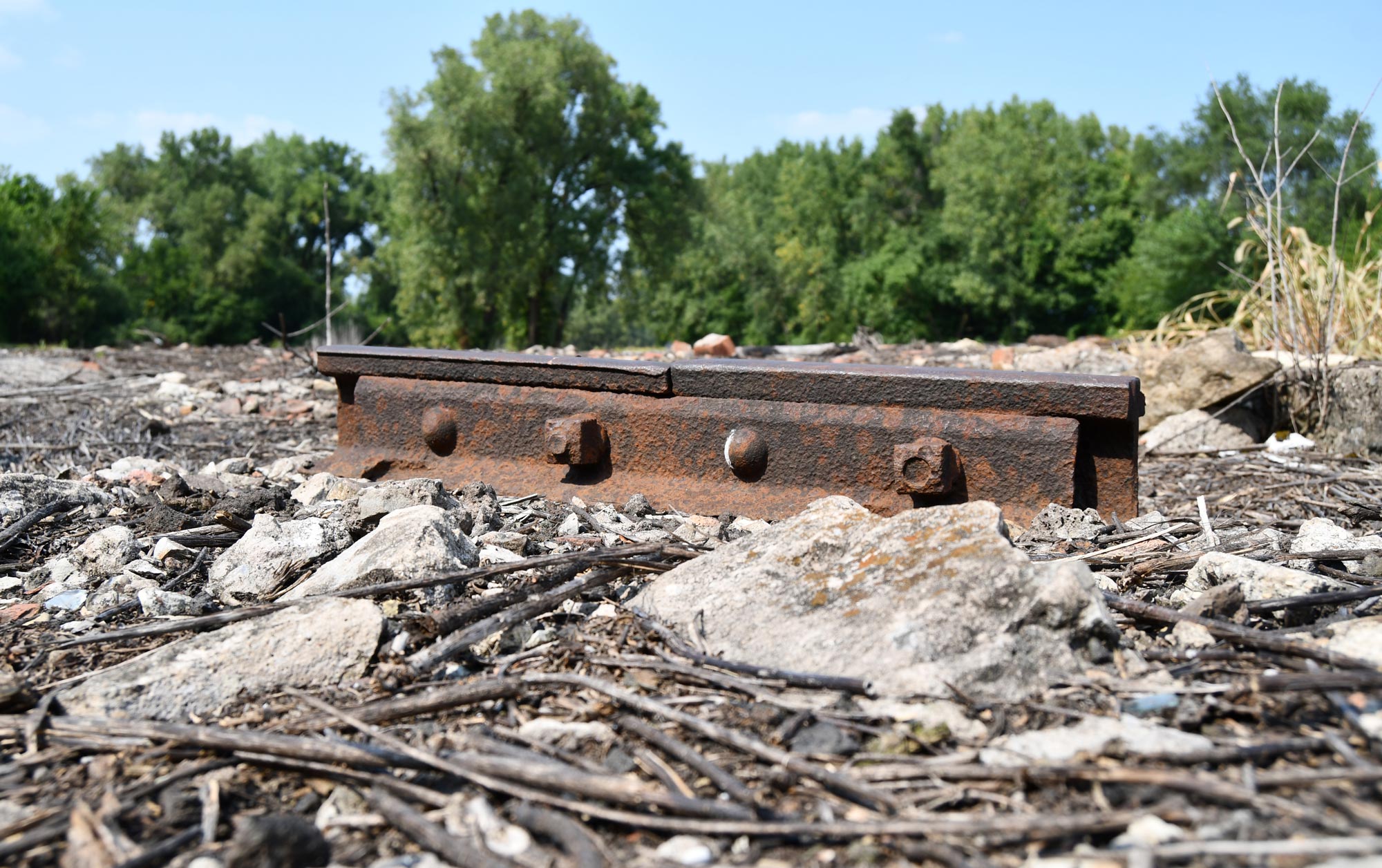