From nurture to nature

Only 300 or so of the green-eyed dragonflies are known to exist in Illinois, and the Forest Preserve District’s Lockport Prairie has the largest population of the federally endangered insect in the state.

A team of representatives from the Forest Preserve Districts of Will and DuPage counties and the Illinois Department of Natural Resources was on hand Monday, June 8, as the larvae were set free in the preserve to boost the species’ numbers in the wild. Two small red-and-white coolers containing the creatures were carried through the prairie grass to the perfect location for release: a bubbling streamlet known to be a dragonfly sweet spot.

The task was simple: tip a small plastic sample cup with a dragonfly larva inside into the water and watch the insects slowly drift away. But the reward was enormous for the “biology nerds” who participated, said Dan Kirk, natural heritage biologist from the Illinois Department of Natural Resources.

“You don’t often get an opportunity to do a federally endangered species release, so when you get a chance to see something like this, it’s very exciting,” he said. 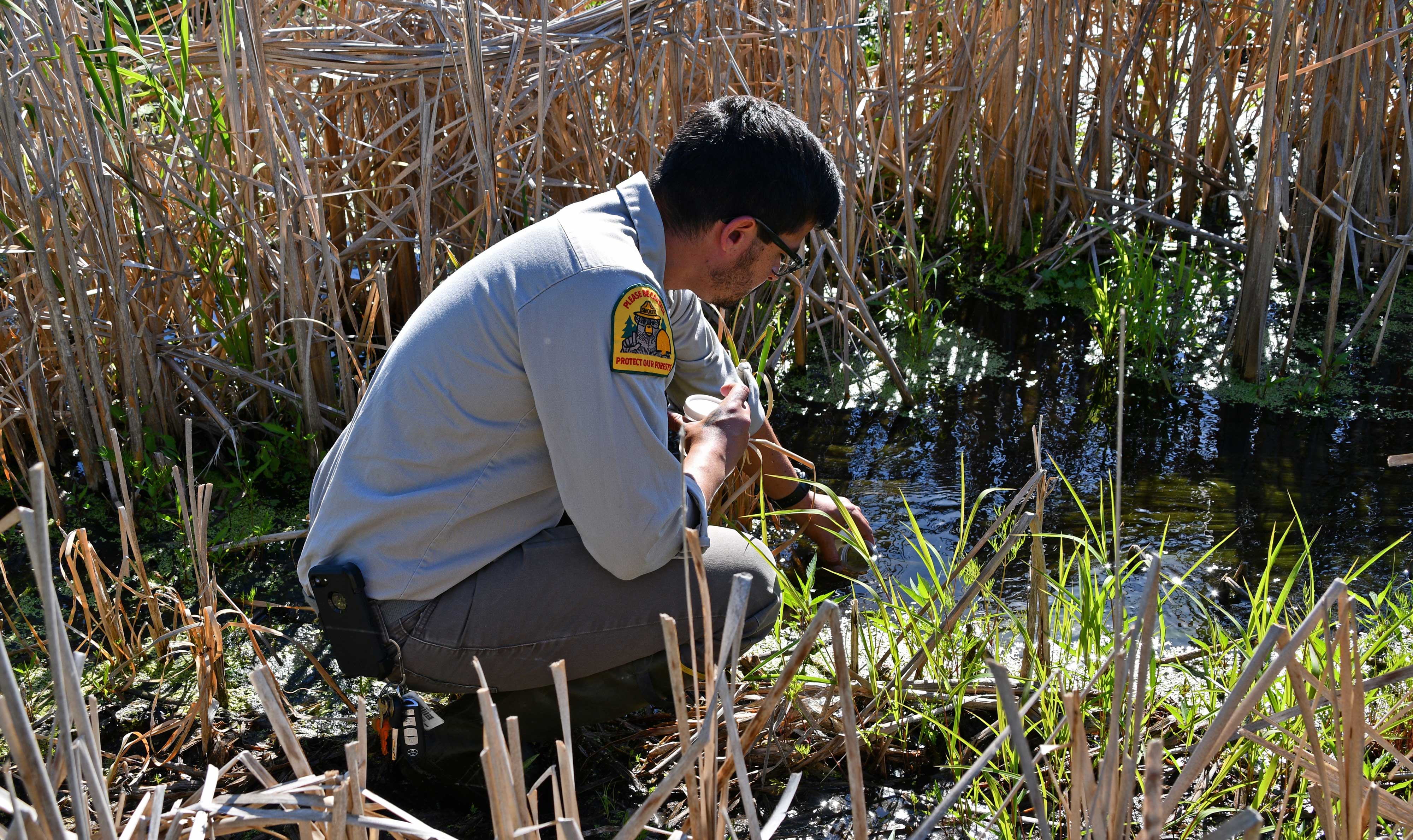 Once released, most of the larvae immediately flattened themselves to the streamlet bottom because “they’re sprawlers,” said Andres Ortega, an ecologist with the Forest Preserve District of DuPage County.

Until their release, the larvae were kept in separate cups because some were bigger than the others. “When there is a distinct size difference between them, they’ll cannibalize each other,” Ortega explained.

Ortega said the larvae had stubby wings, but once they hatch out of larval skin they will be like butterflies emerging from their chrysalises and, “They’ll have these wings that will extend out, dry out and then they can fly off.”

The larvae are expected to enter their final stage of adulthood in one to three weeks as they explore their new home in Lockport Prairie.

“It’s the most productive Hine’s habitat in Illinois,” Ortega said. “This is it. Hine’s only breed in streamlets like this. Not a stream, not a river, not anything fast flowing or too deep.”

The water also must have devil crayfish burrows that the larval Hine’s dragonflies will live in until they blossom into adulthood.

“They will occasionally emerge out of the burrows to feed and then they’ll back in,” Ortega said. “(They eat) pretty much anything that’s alive that’s smaller than them.”

The preserve also has dolomite prairie, which is a preferred habitat for the dragonflies. That is why the Forest Preserve District of Will County in partnership with the U.S. Army Corps of Engineers has spent the past several years restoring Lockport Prairie and the adjacent Prairie Bluff Preserve. Restoration of underground water flow at Prairie Bluff has helped keep the rivulets needed by the dragonflies flowing east into Lockport Prairie.

“Lockport Prairie is one of a few locations along the Des Plaines River where Hine’s emerald dragonflies successfully breed,” said Dave Robson, the Forest Preserve District of Will County’s natural resource management supervisor. “Loss or degradation of any of these areas could be fatal for the long-term survival of the Hine’s emerald dragonfly in Illinois.”

That is why Lockport Prairie has been designated by the U.S. Fish and Wildlife Service as a critical habitat unit within the federal recovery plan for the species, Robson added. 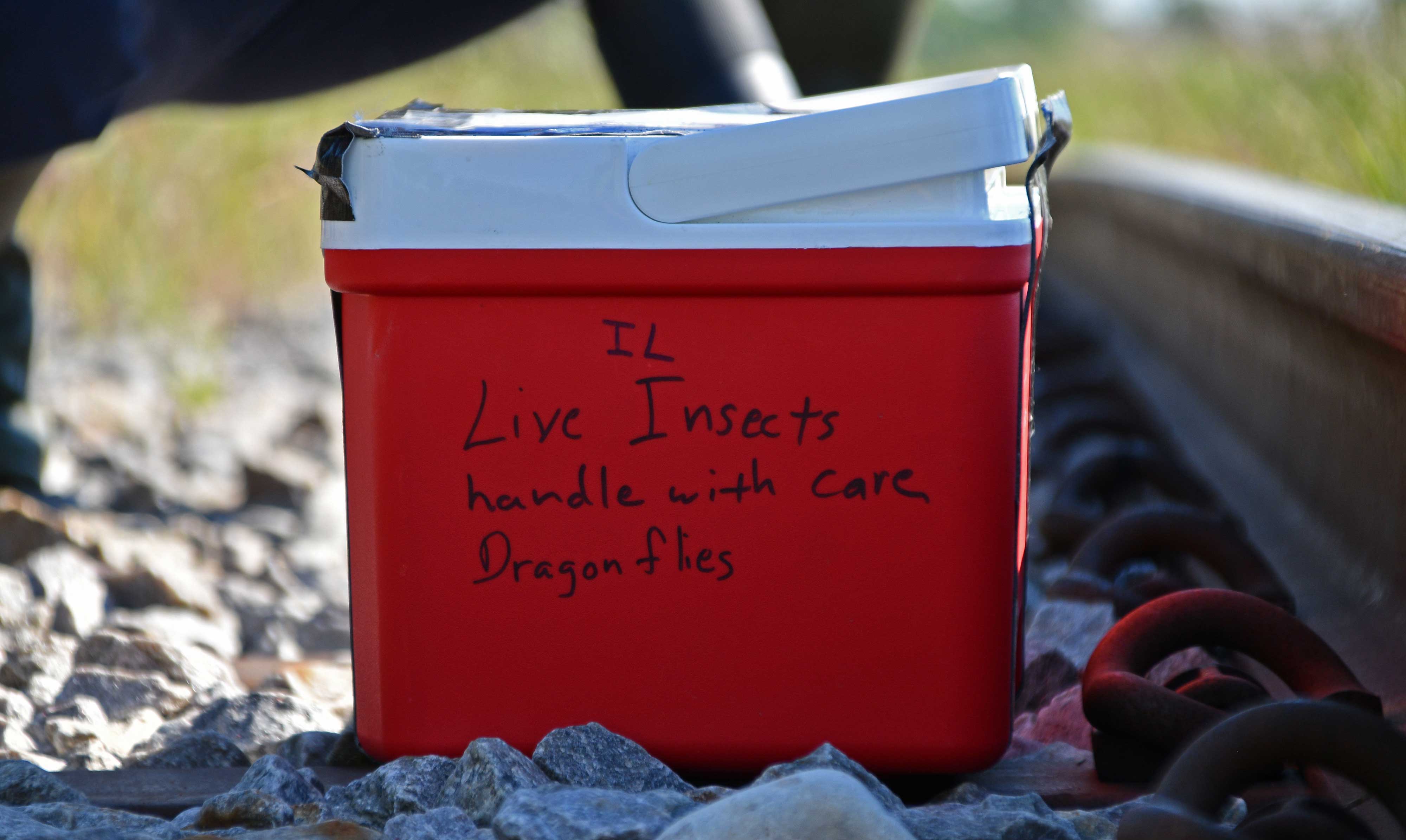 The larvae, waiting to be released.

Monday’s release was three years in the making. Eggs were harvested from female dragonflies from various parts of the Des Plaines River Valley by the University of South Dakota. Extracting the eggs is simple, once the females are caught with butterfly nets.

“If you take that female and dip the tip of her abdomen … into water, it’s a cue for them to release eggs,” Ortega explained.

The window to harvest eggs is small. After growing as larvae for years, adult dragonflies have a short lifespan.

“Adults generally only live for 3 to 6 weeks,” Ortega said. “That’s fairly common with insects. They spend much more time growing in the larval stage, and by the time they’re adults they are just looking to mate and expire.”

Once eggs are collected, the larvae are raised in captivity in labs at the South Dakota school, the Forest Preserve District of DuPage County’s Urban Stream Research Center, and Genoa National Fish Hatchery in Wisconsin. Of the 30 larvae released at Lockport Prairie, 24 were reared at the university and six at the DuPage County site.

The collaboration is part of an experimental program, said Daniel Soluk, a biology professor at the University of South Dakota who has been working with the species since it was listed as endangered in 1995.

“The ultimate goal is to generate large numbers of adults to enhance or stabilize the population in Illinois, which has been reduced to a low number since the 1990s,” he said.

Normally, the dragonflies would have been allowed to mature in the labs to adulthood before being released, but that wasn’t possible this year due to the COVID-19 pandemic. Instead, the larvae were mailed to Ortega’s home so he could transport the insects to the preserve where they could quickly morph into adults. 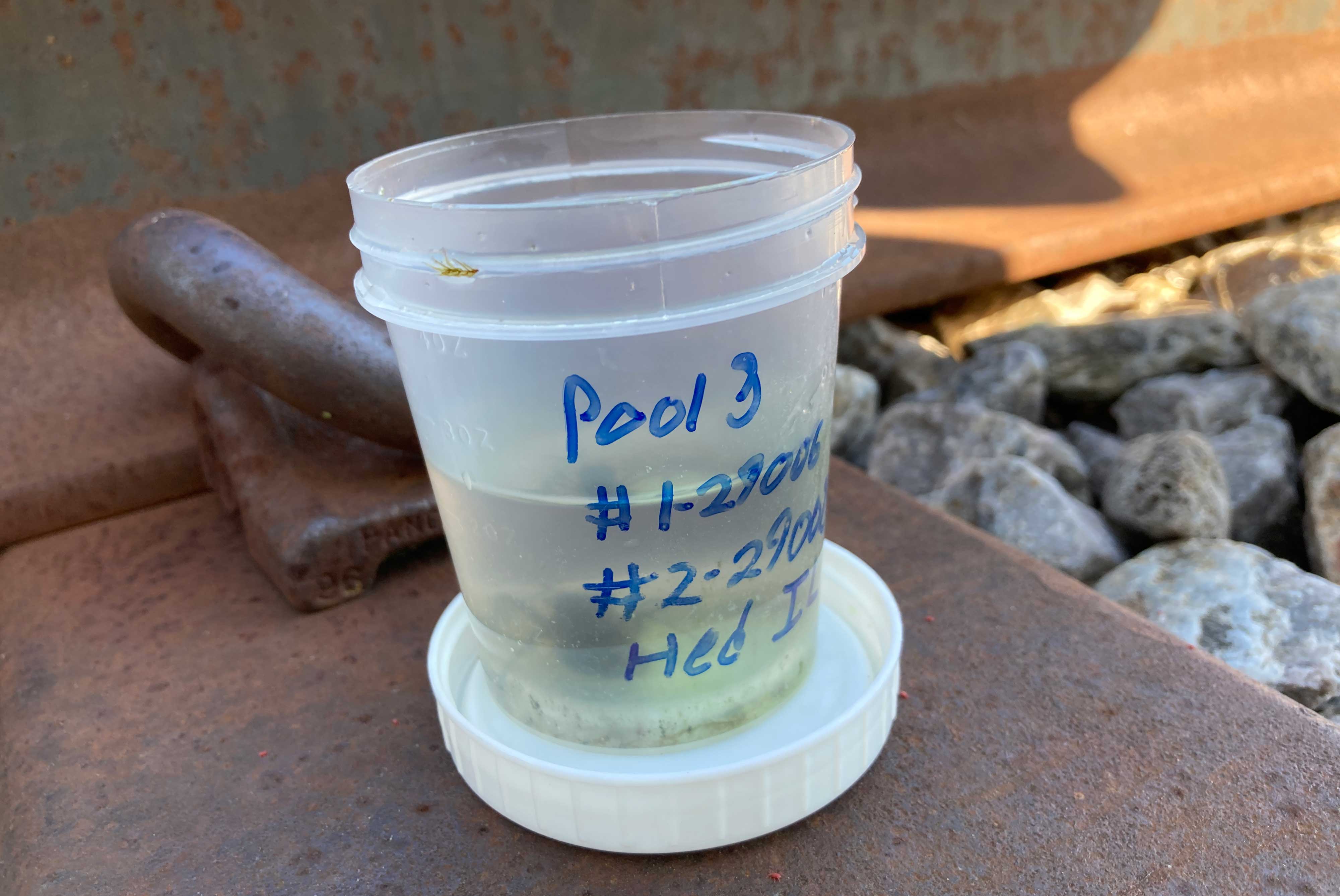 Each Hine's emerald dragonfly larvae was individually packaged prior to release.

Although the Hine’s emerald dragonflies released Monday mature to final larval stage in around three years, those in the wild take longer.

“In a natural setting, between egg and adulthood is between four and five years,” Ortega said. “They’re a very long-lived, very slow-growing dragonfly.”

Some of the more common dragonfly species can make it to adulthood in three to nine months. The slow maturation process for the Hine’s emerald dragonfly is one of the reasons the species is endangered.

“When you are stuck in very small habitat for so long, any change … in those five years and you are totally at risk,” Ortega said.

That is why in the wild, very few Hine’s emerald dragonfly eggs make it to adulthood, according to research at the University of South Dakota.

“In general, for every 100 eggs you might get one adult out of them if they’re left to their own devices in nature,” Ortega said.

Giving the insects a three-year head start should help around 50 percent of the larvae survive to adulthood at Lockport Prairie, he estimated.

But they still will have hurdles to overcome, said the University of South Dakota’s Soluk.

“The emergence process is a dangerous time for dragonflies, since larvae have to crawl up the stems of cattails or other emergent plants and then molt into the adult,” he explained. “The process typically takes under an hour, but the freshly emerged adult is very vulnerable to ground predators.”

The first flight also can be fraught with peril because the dragonfly’s wings are weak and it can be attacked by birds.

According to the U.S. Fish and Wildlife Service’s (USFWS), Hine’s Emerald dragonflies also are suffering from pesticides and pollutants in the environment, changes in the flow of groundwater and the loss of wetlands to make way for development.

Stepping in to help 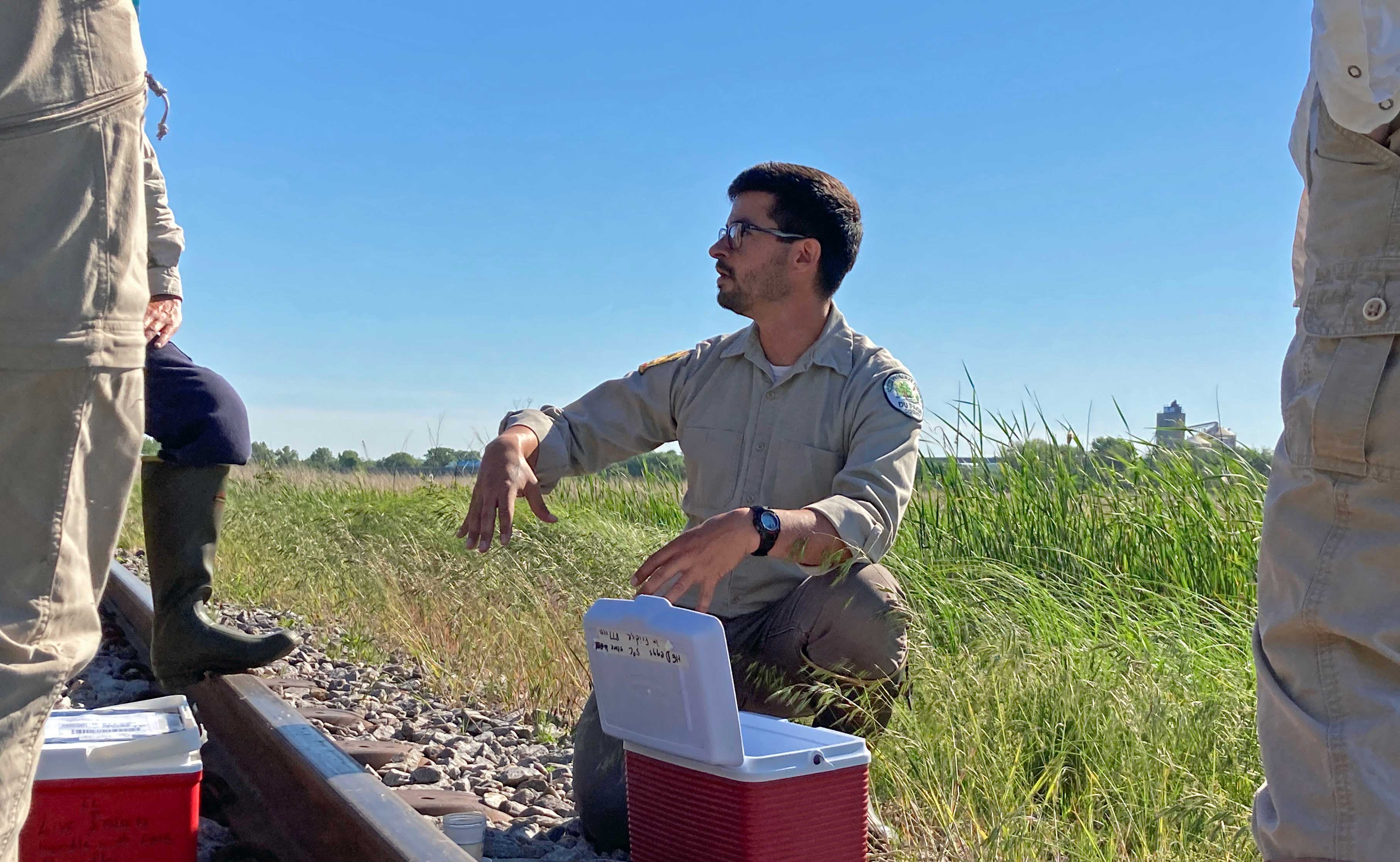 Andres Ortega, an ecologist with the Forest Preserve District of DuPage County, explains why Lockport Prairie Nature Preserve is a perfect spot to release the larvae.

While the Hine’s emerald dragonfly is struggling, it is an important part of the ecosystem, the USFWS website explains.

“Dragonflies play an important role in nature,” the site states. “They catch and eat small flying insects, including mosquitoes, biting flies, and gnats. In its immature stage (nymph), a dragonfly is an important food source for larger aquatic animals such as fish. They serve as excellent water quality watchdogs, are part of our nation's natural heritage and add beauty to our world.”

Hine’s emerald dragonflies are a beautiful, highly specialized animal, Soluk said. But they also serve an ecological purpose because of their complex relationships with other species, he added.

“They also are important because they are indicators of groundwater changes, and they highlight the need to protect these water sources even when they are outside the boundaries of preserves,” he said. “Sometimes you need to buy cornfields if you really want to preserve and restore nearby high-quality wetlands.”

DuPage County’s Ortega said he is sometimes asked why he and others work so hard to prevent even the smallest insect from becoming extinct. He said history shows that sometimes when a species becomes extinct, it has negative cascading effects on many other species in an area.

“… When extinction, or getting close to an extinction, is clearly caused by human impacts, I personally think it’s our role to try and step in and stop that when we can,” he said.

Having a more diverse planet also is more aesthetically pleasing, Ortega added. There is inherent value in, “Being able to go out to a natural area to see something you almost never see or you only see once in a lifetime and something as striking as a dragonfly with their bright green emerald eyes.”