They may be tiny, but these birds are mightily impressive

Hummingbirds are cool little creatures for a number of reasons, including amazing flying ability, incredible eyesight, and an astounding memory. With a metabolism that's off the charts, their bodies are fine-tuned for maximum overdrive and, as a result, they are constantly on the go.

Without a doubt, there’s no other bird on Earth that can zig and zag with such precision and speed, something that is on display each summer around the hummingbird feeders at Plum Creek Nature Center in Crete Township.

There you’ll see the ruby-throated hummingbird, which is the only kind regularly found not only in the area, but in eastern North America.

Watching them in action is one thing, but knowing the finer details will result in a much better appreciation of how amazing they are.

These miniature aviators have chest muscles and a sternum that are proportionally larger than the rest of their bodies, making them built for flying. Their wings outline a horizontal figure eight in the air, and flap 50-200 times per second. They can reach a maximum flight speed of 30 miles per hour and, in a dive, can double that speed. They are also the only bird that can fly backward.

Amazingly, they can do all of this with incredible accuracy and avoid deadly crashes.

A 2016 study published in the Proceedings of the National Academy of Science focused on Anna’s Hummingbirds, and revealed how the birds use visual cues to navigate.

Researchers built an 18-foot-long tunnel that had a perch on one end and a nectar feeder on the other. Along the walls were various patterns, and eight cameras were installed to chart their movement.

The birds avoided any objects that were vertical and larger than a half inch. They also use what’s known as image velocity, in which they account for how fast they encounter objects when moving up and down. By calculating the size and rate of an approaching object, they know when to swerve to avoid crashing.

Then check out this wild video of hummingbirds flying, shaking and drinking in slow motion.

They can't always speed away from danger

Sure, they can fly as fast as your grandfather drives, but other much slower creatures still can pose a threat to their survival.

Among the animals with a taste for hummingbirds are sharp-shinned hawks, American kestrels, dragonflies and frogs.

And then there’s praying mantises, which have been known to hang out on a hummingbird feeder and snatch a bird right out of the air. 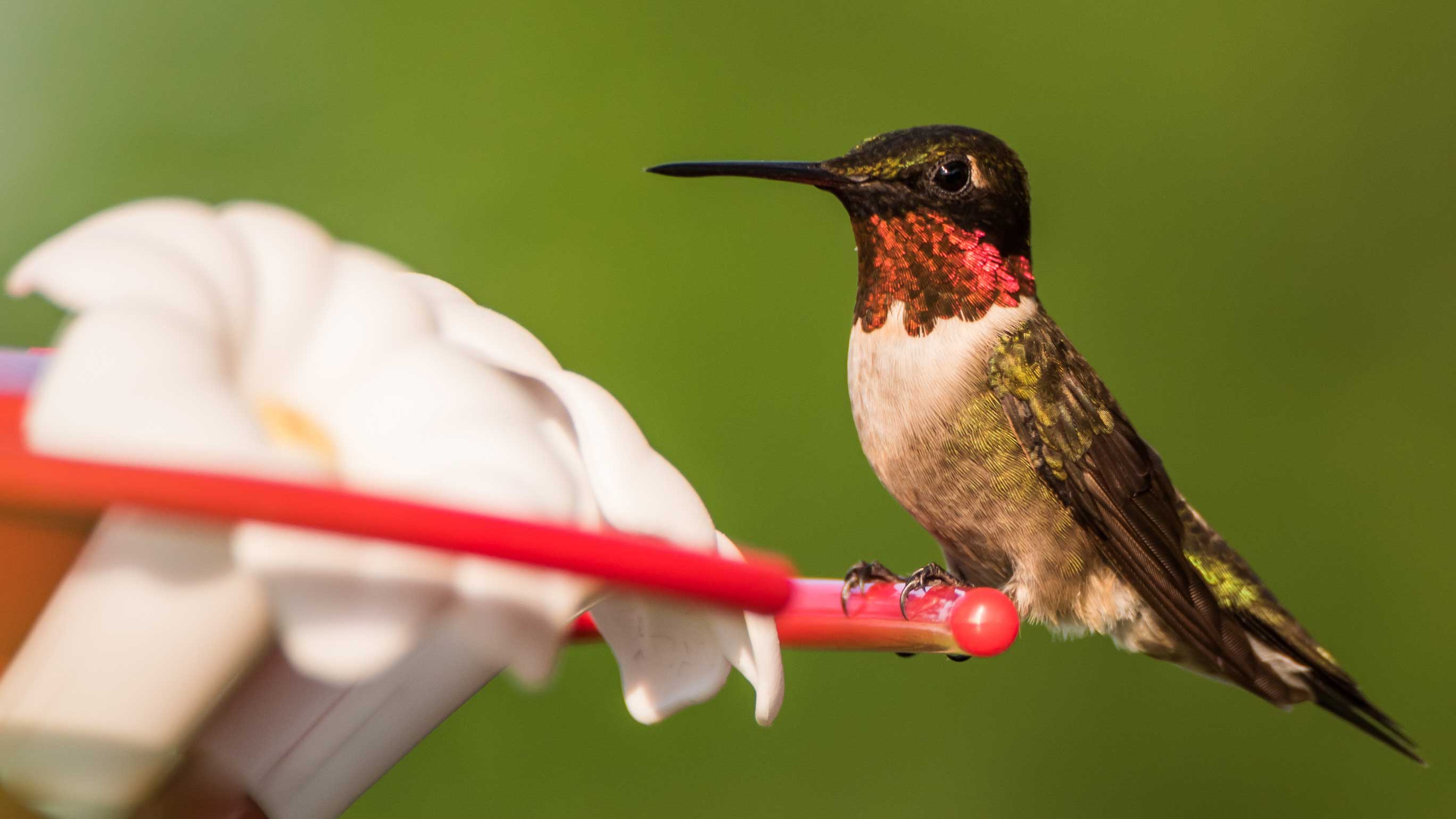 Because they can process ultraviolet light, hummingbirds can see colors that humans can't. They also are among a select group of animals that have a third set of eyelids. These tiny pieces of skin are translucent and act as built-in flight goggles, protecting the hummingbirds' eyes as they flit up, down, back, side-to-side and even upside down.

For being so small, hummingbirds have big brains, accounting for more than 4 percent of their total weight, which is pretty huge. Proportionally, that's the largest brain of any bird. In comparison, a human brain is on average about 2 percent of a person's total body weight. Studies have shown that hummingbirds use those big brains in a variety ways, including remembering every flower they've ever visited and how long to wait before returning to a flower again so it has time to produce more nectar. 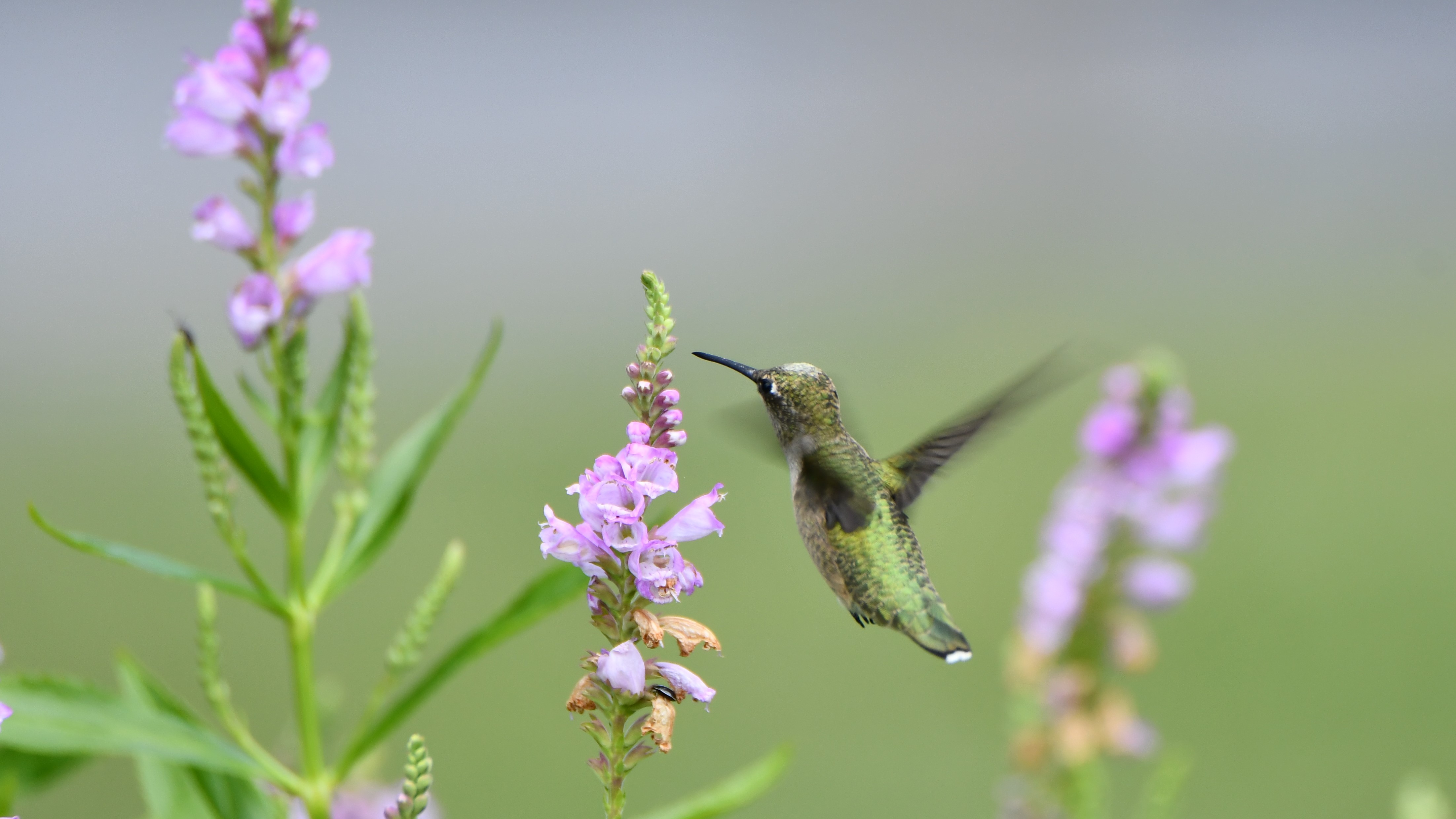 Because they are highly active, they are big eaters. Since their metabolic rate is about 12 times that of a pigeon and 100 times that of an elephant, hummingbirds eat between 1.5 and 3 times their body weight a day. Their main staple is the sweet sugar of flower nectar – although they will also eat small insects and spiders – and, with such a big appetite, they visit hundreds of flowers daily.

In the weeks leading up to their annual migration in the spring and fall, hummingbirds increase their food intake to fatten up. They’ll go from weighing about 3 grams (slightly less than a penny) to a robust 5 grams (about the weight of a nickel) so they can survive the long journey to or from southern Mexico or western Costa Rica.

Here’s something truly-eye popping to chew on: If humans consumed food at the same rate of hummingbirds, experts estimate that would translate into an average adult eating 250,000 calories a day and excreting 20 gallons of urine.

In spite of the amount they eat, hummingbirds have a pretty complex process for taking in nectar. While it used to be thought that they use their tongues like straws, hummingbirds actually have forked tongues with fine hair-like extensions. When drinking, those extensions unroll and curl around each nectar drop taken in. 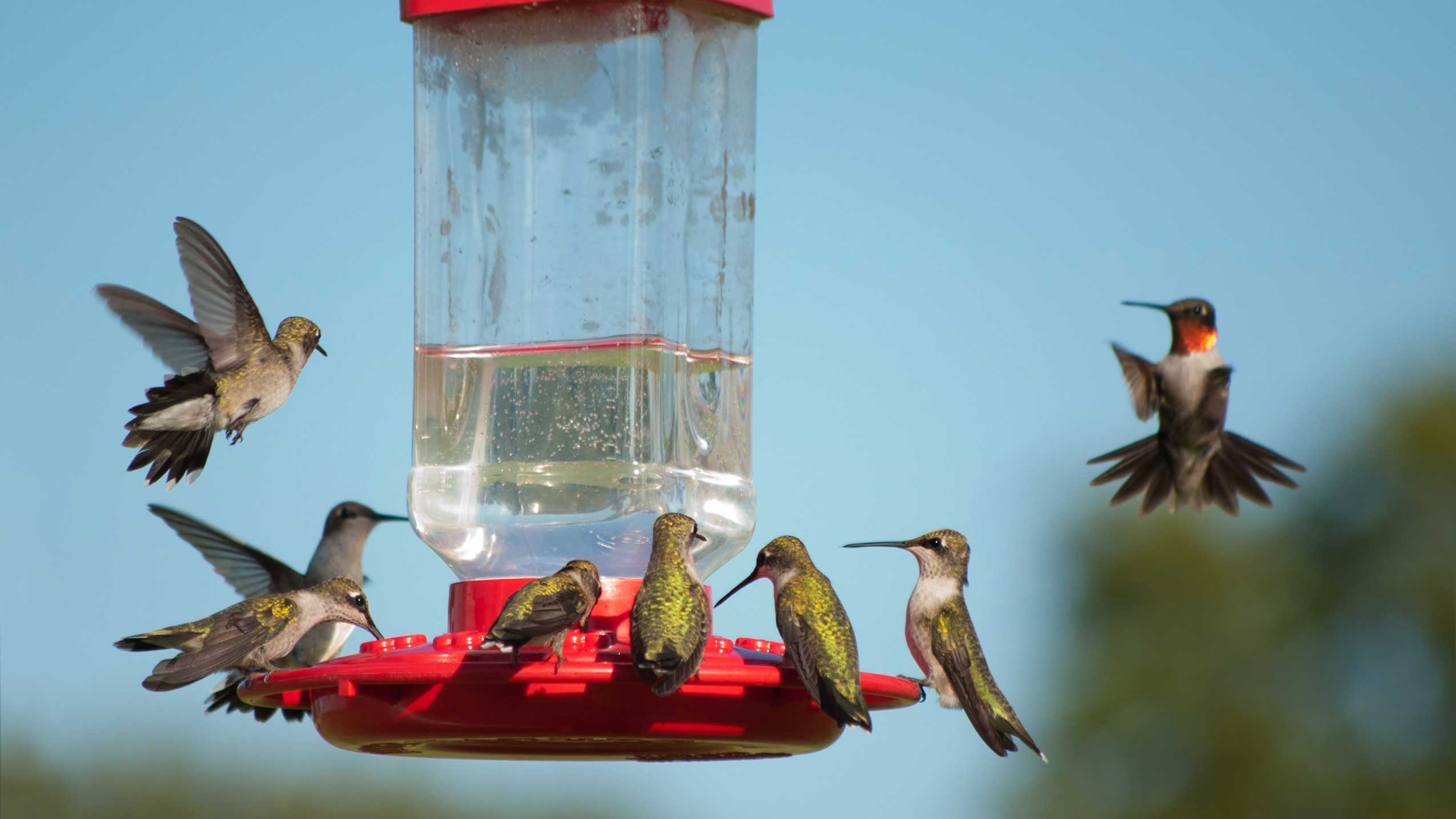 While their diet may be sweet, hummingbirds can be pretty pugnacious. When competing for a mate, male hummingbirds are willing and ready to fight. Using their long beaks like little knives, they will attempt to stab their competitor in the throat to win the affections of the female. They will also regularly attack other birds, much larger than them, if they try to move into their territory.

To keep up with the fast-paced life of this bird, a hummingbird's heart beats around 1,200 times per minute. During the same amount of time, this bird takes approximately 250 breaths and that's just when at rest.

Probably the only body part on a hummingbird's body that's not in tip-top operating condition is its feet. Hummingbirds can walk, but not very well. While they use their feet mainly for perching, their propensity for flight makes feet less of a priority and their smaller feet contribute to more efficient flying. Not a bad trade-off.