Bridges of all shapes and sizes are sprinkled throughout the Forest Preserve District of Will County. Some cross streams; others traverse ravines. They’re all part of the District’s quest to reconnect people with nature. But a trio of trestles is noteworthy because of the history, location and design of each bridge.

The Centennial Trail Bridge at Schneider’s Passage in Romeoville, the Wauponsee Glacial Trail Bridge over the Kankakee River in Custer Park and the Plum Creek Greenway Trail Bridge in Crete Township provide passage for thousands of preserve visitors each year.

From Swing Bridge to Trail Conduit: The Centennial Trail Bridge

The swing bridge along the Centennial Trail was constructed in 1899 by Elgin Iron Works and erected by Strobel Steel Construction Company, according to a report from the Historic American Engineering Record (HAER) at the Library of Congress. For more than 90 years, the bridge – then known as the Romeo Road Bridge – carried traffic over the Chicago Sanitary and Ship Canal.

The canal, built from 1892 to 1901, reversed the flow of the Chicago River, and it brought Lake Michigan water and “stagnant sewage” 28 miles from the Chicago River at Damen Avenue to the Des Plaines River in Lockport, the HAER report explained.

The bridge was the first to be built of 15 original bridges that spanned the canal, and it is the only example of this type of bridge left in Illinois. When it was operational, the bridge featured a bridge tender’s house perched high atop a steel platform. 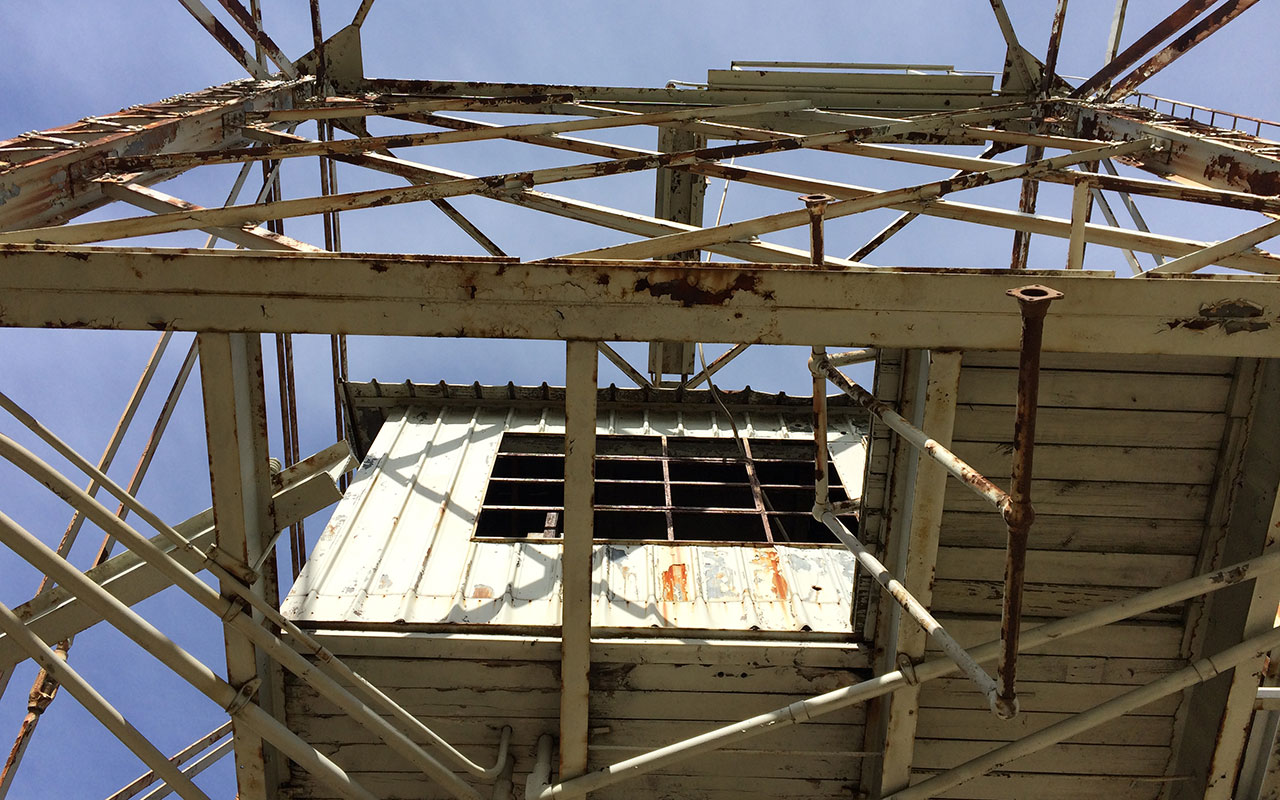 The bridge tender's house, as seen earlier this summer.

The 302-foot-long span is a Warren through truss style with a “bob-tailed” design, which means its two arms are different lengths. In a “through-style” configuration, traffic travels through the structure which is cross-braced above and below. Equilateral triangles form the truss in the Warren truss bridge.

The swing bridge rested on a vertical pivot, and as ships approached on the canal, electric motors turned the bridge horizontally up to 90 degrees to the opposite bank to allow boats and barges to pass by on the waterway. 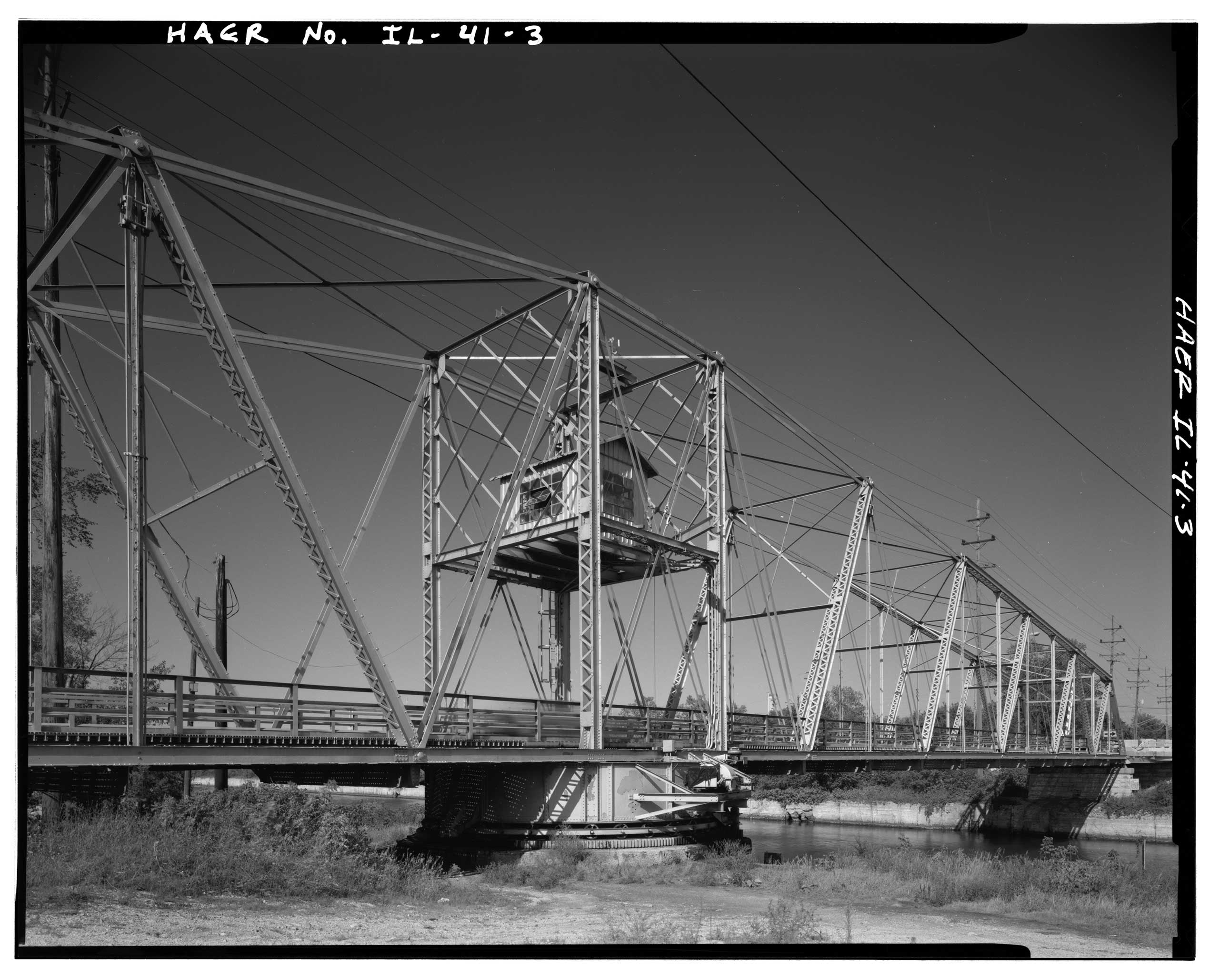 Canal engineer Isham Randolph wrote a report on the canal’s bridges in the early 1900s where he noted that the iron and the steel in the Romeo Road Bridge weighed 339,505 pounds and the counterweight weighed 208,100 pounds. The HAER report noted that the total cost of the structure was $33,621.

The swing bridge closed to traffic in 1990 due to its deteriorating condition and it was replaced with a high-level bridge, allowing ships to pass beneath it.

Because it was the last of its type, the swing bridge was saved and moved a few hundred feet away to the Forest Preserve District’s Centennial Trail in 1996. Centennial Trail is 26 miles long and it connects the Chicago Portage site at Harlem Avenue with Lockport. 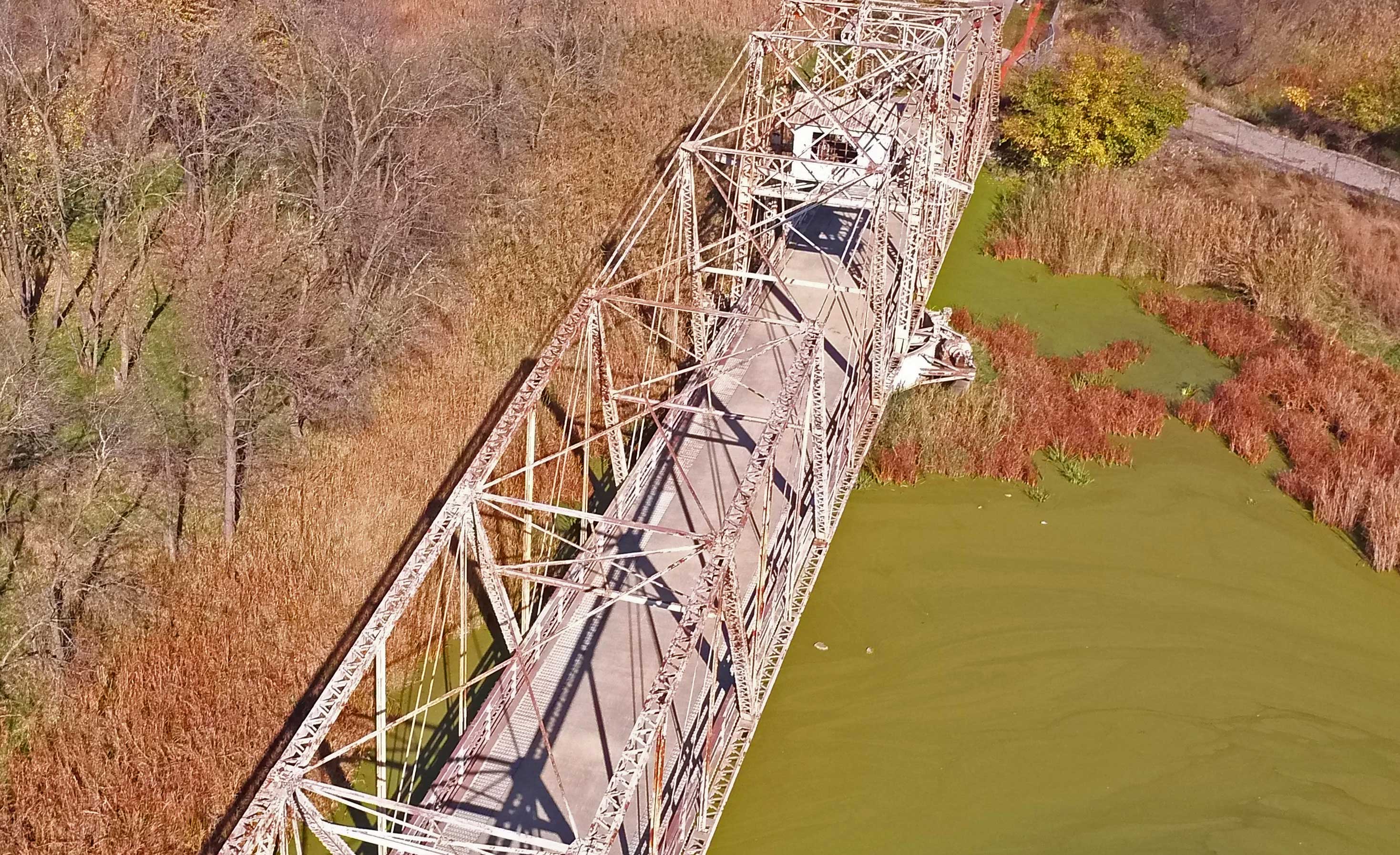 While the bridge no longer swings open, it does carry bikers and hikers over a wetland area connected to the Des Plaines River. The imposing metal structure is the perfect place to stop and rest to view the water and wetlands below.

From Rails to Trails: The Wauponsee Glacial Trail Bridge 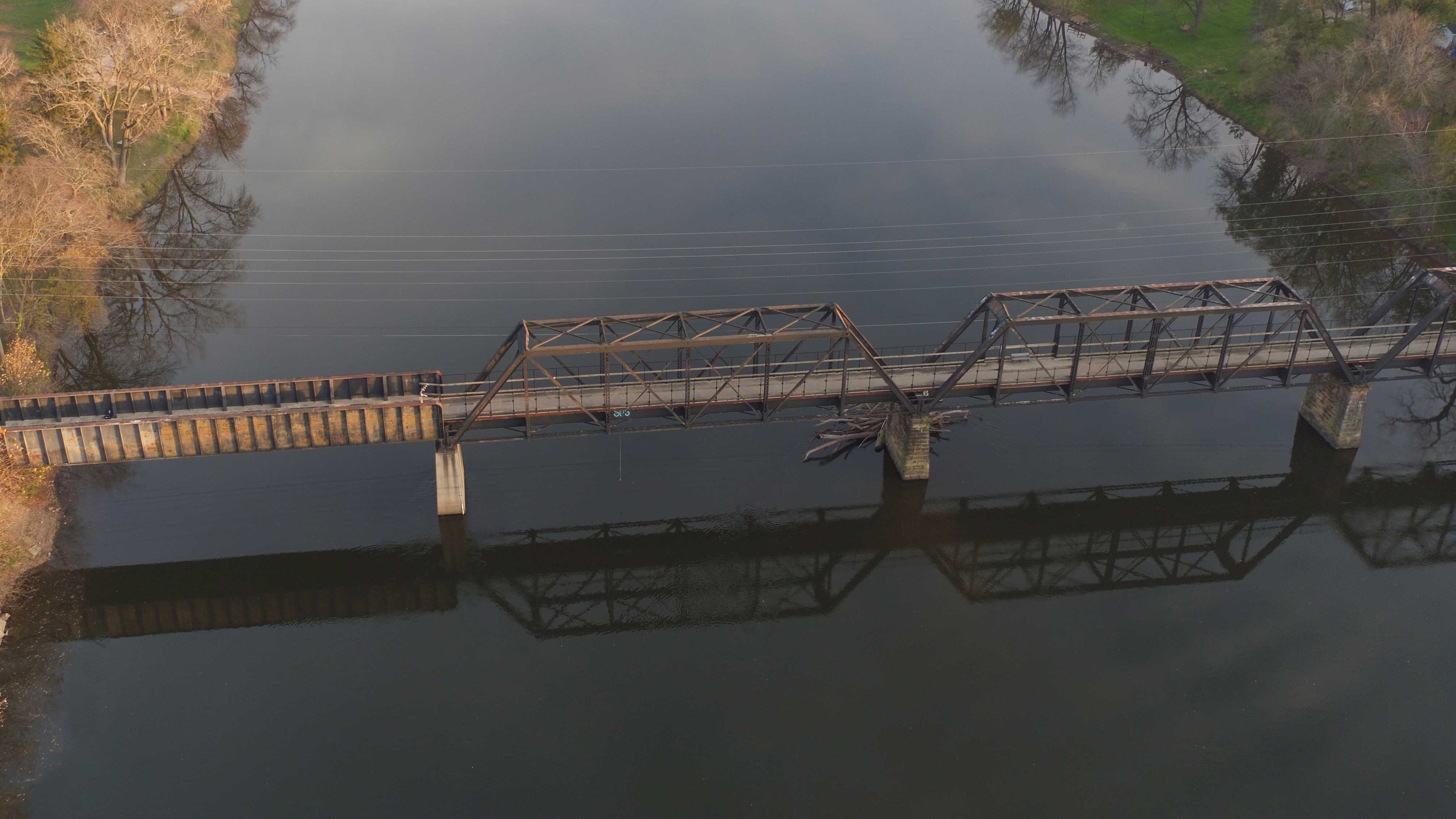 The second of the three structures is the 600-foot-long Wauponsee Glacial Trail bridge over the Kankakee River. A previous bridge at the site was built in the 1880s, but it was replaced with the existing bridge in 1902. The Pratt through truss bridge was built by Wisconsin Bridge and Iron Company for the Wabash Railroad.

In contrast to the Warren truss bridge along the Centennial Trail, isosceles triangles form the truss in the Pratt truss style. 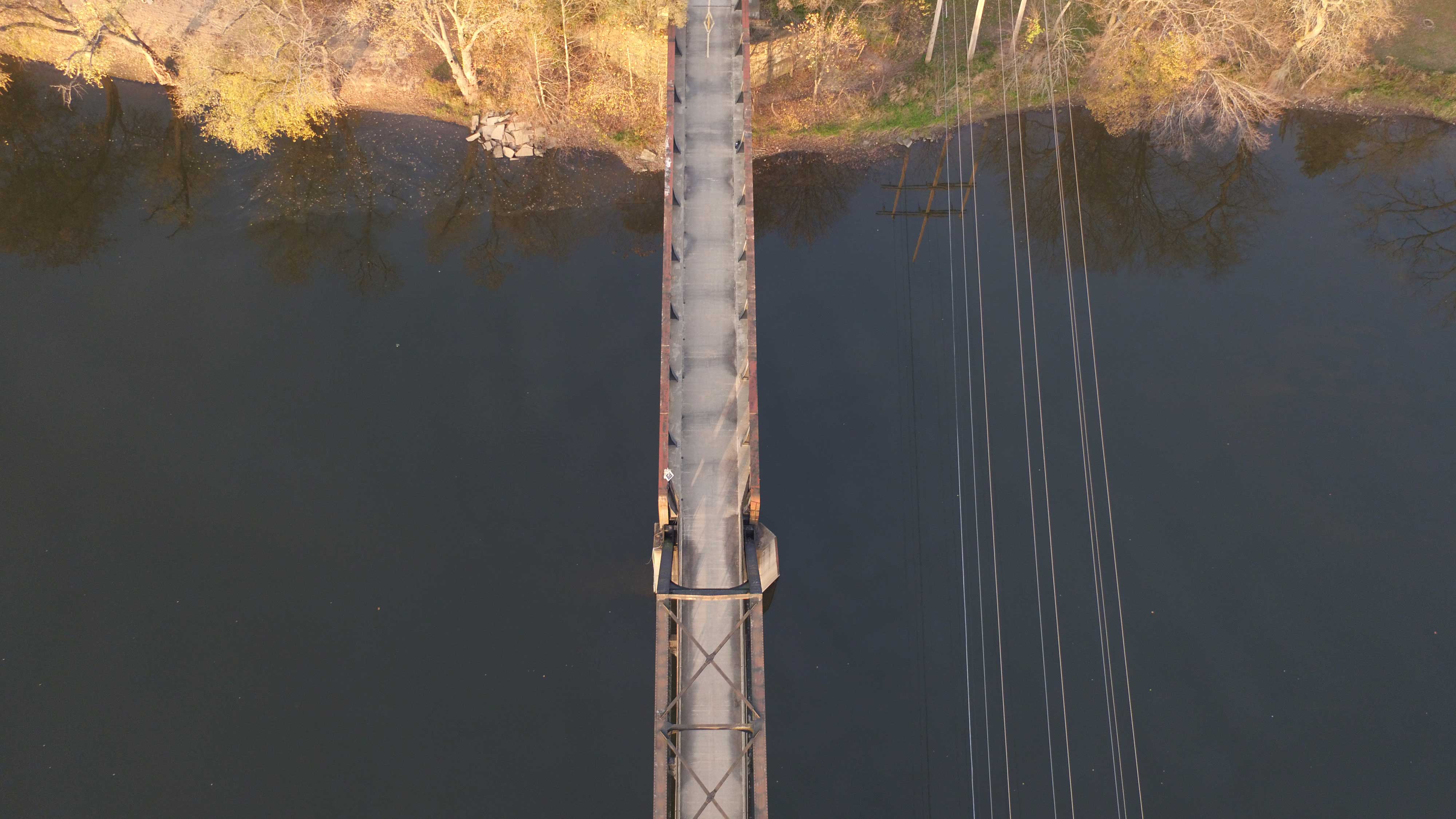 Originally called Wabash Railroad Bridge #1145, the new bridge in Custer Park served the Wabash Railroad and Norfolk and Western Railway, which later became the Norfolk Southern Railway. A derailment on August 22, 1968, altered the bridge’s structure and the northernmost section had to be rebuilt; one of the spans was eliminated and replaced with a through girder bridge section.

“Up to the early 1970s the operations on this line did not change much after the Wabash merged into the Norfolk and Western in 1964,” train aficionado Rich Fiedler of Morton wrote in an email. “Each weekday evening two freights left Landers Yard in Chicago heading south. The ‘Roadrunner,’ a fast piggyback and merchandise freight to St. Louis, left around 10 p.m. A local freight that serviced any town or industry left shortly after.

“The bridge is a survivor,” added Fiedler, who is a member of the Wabash Railroad Historical Society. “Truss bridges from the turn of the 20th century built up from plate and lattice are disappearing fast due to age and corrosion and the fact that steel back then was brittle compared to newer steel.”

The Wabash and other railroads hauled perishable items and the goods were ice-and-brine cooled.

“The salt brine from years of service caused severe corrosion on these old bridges hastening their replacement,” he explained. “Most railroads are replacing vintage bridges now for the reasons above and because modern rail cars are much heavier.”

Fiedler noted that the original bridge at the spot was built of iron and it was short-lived, but the remaining bridge was built of steel, which allows it to live on as a trail bridge.

“Just think, the original iron spans lasted only 20 years before heavier locomotives and cars rendered them obsolete, but the steel spans lasted 90 years in service.” 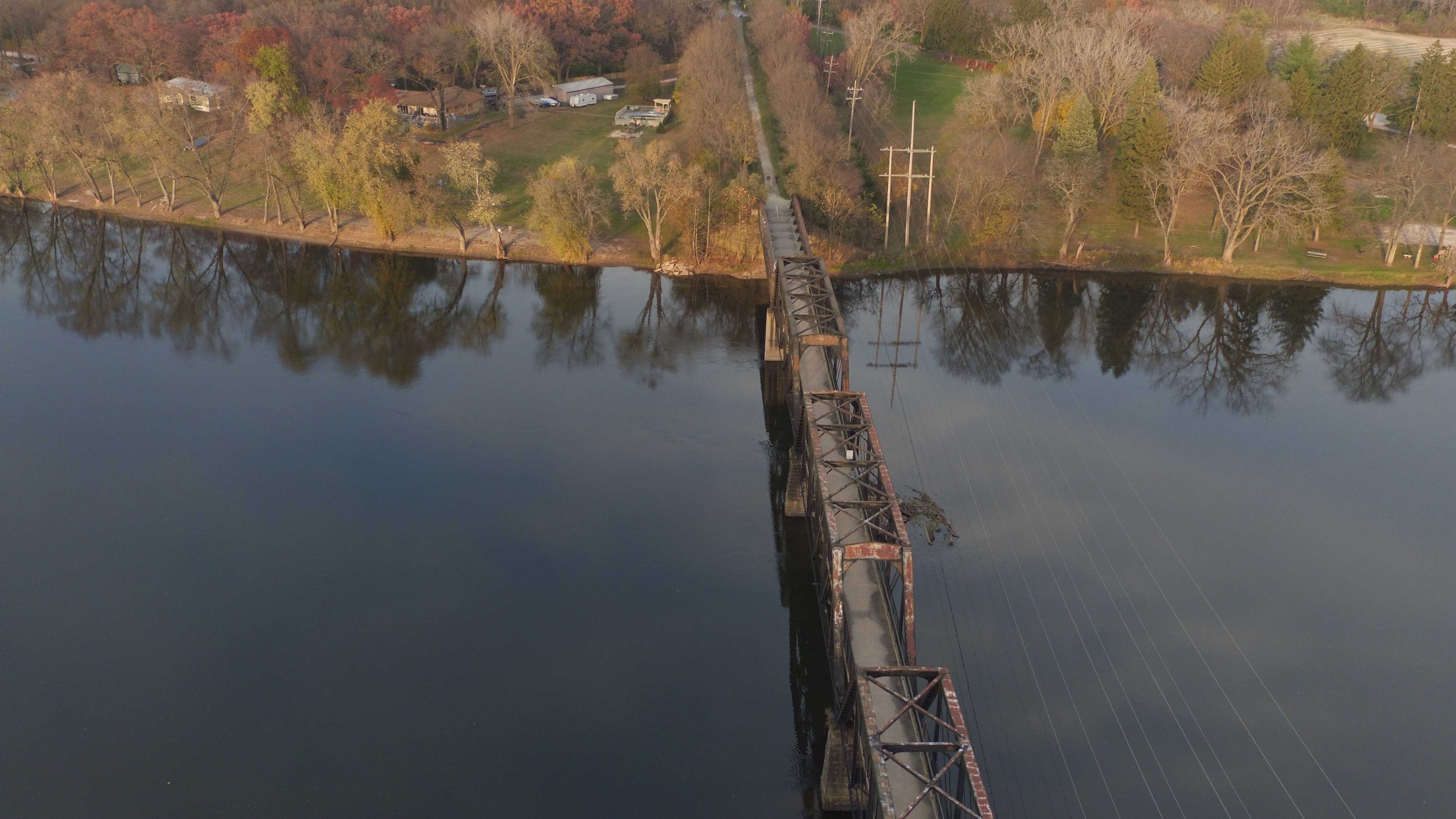 The Forest Preserve acquired the bridge and the railroad right of way in the 1990s from Norfolk Southern after the company donated the former rail line to the Illinois Department of Natural Resources. The Wauponsee Glacial Trail was built in stages along the rail line from 1999 to 2007.

The trail is a good example of the “rails-to-trails” effort around the country, which is a green way to repurpose old rail lines and bridges for recreational purposes. And the bridge is a riveting reward for hikers, bikers and equestrians who trek along the 22-mile trail, which begins in Joliet and ends at the bridge and Route 113.

Spanning the Ravine: The Big Bridge 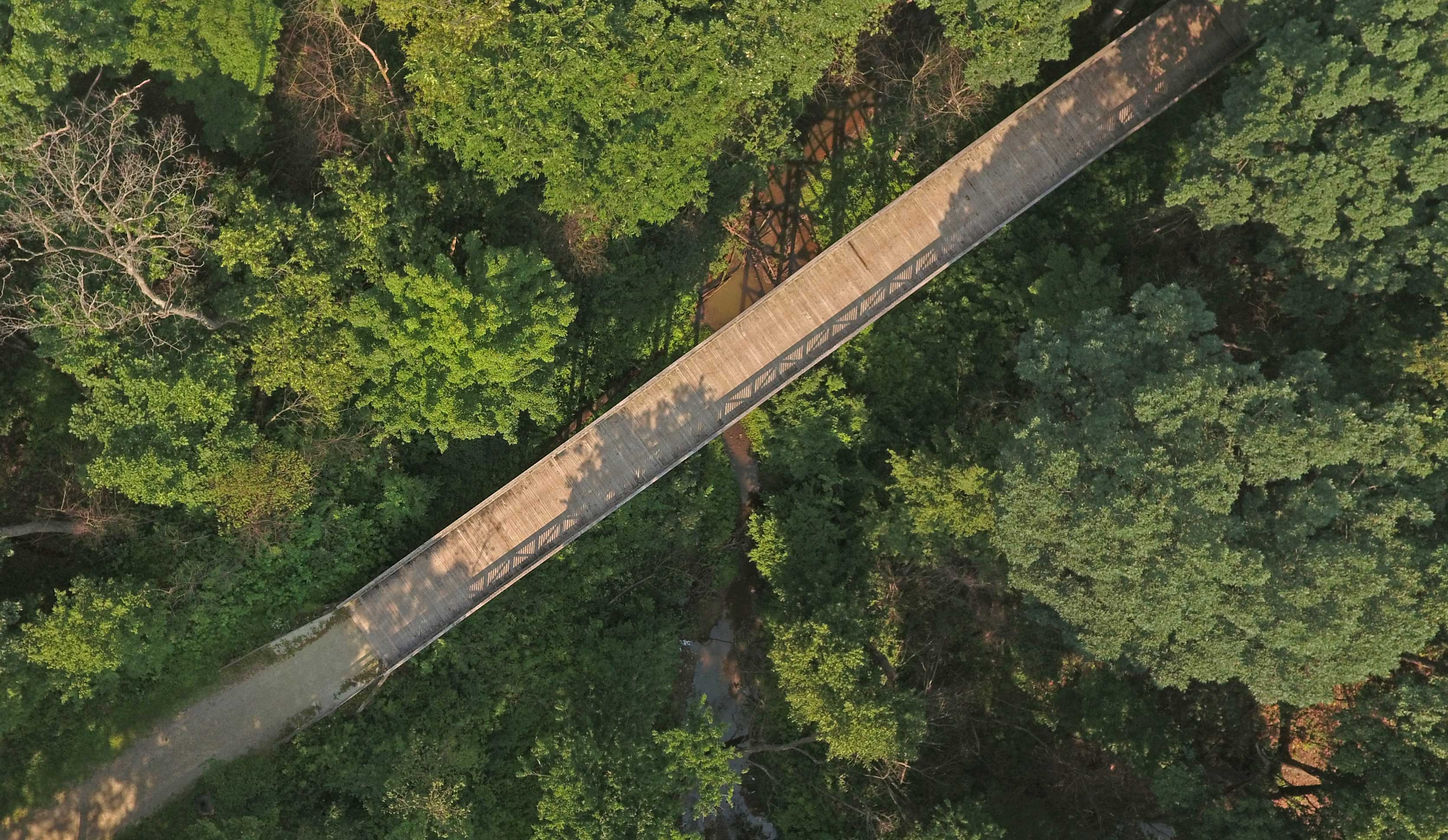 The newest big bridge of the three highlighted here is the stunning wooden Goodenow Grove Nature Preserve structure that spans a 40-foot ravine, providing gorgeous views of the surrounding forest in a preserve known for great biodiversity. Goodenow Grove is home to several state-threatened or endangered animal and plant species including Kirtland's watersnake, the spotted coral-root orchid and ear-leafed foxglove.

The 267-foot-long bridge is 12 feet wide and provides passage on the 3.15-mile Plum Creek Greenway Trail over a tributary of Plum Creek. Timbers up to 50 feet long were used in its construction, and the bridge features 500 deck boards that measure 6,000 linear feet.

Seventy-five sets of “X” braces bolster the bridge, which was secured with 6,000 deck screws when it was constructed by Signature Bridge Inc. of Willoughby, Ohio. 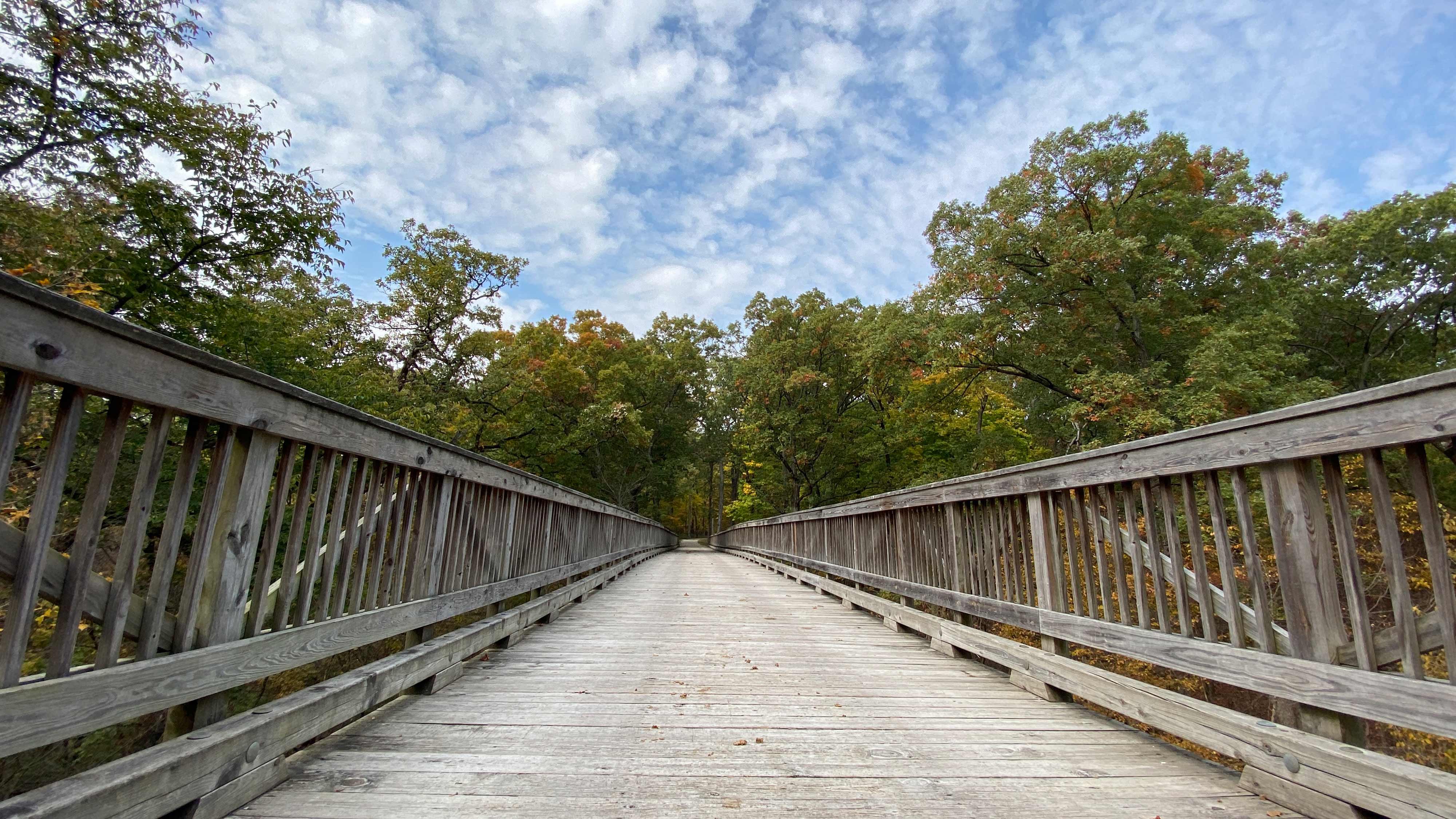 The bridge debuted in 2012 when a grand re-opening was held in September for the preserve and for Plum Creek Nature Center, Goodenow Grove’s visitor center.

While its two sister bridges have more history and girth, the Goodenow Grove bridge is nestled deeper in the woods and offers a more intimate view of the surrounding forest.

“These are just a few of the many bridges you’ll find throughout the forest preserves,” said Ralph Schultz, the District chief operating officer. “Without these bridges and others, many of the most beautiful elements of the Forest Preserve District would be inaccessible.”

The bridges’ existence illustrates man’s ability to harness the wilderness and they provide access to and through nature for all who care to search for the beauty around them.