It's the granddaddy of all herons

Of all the herons in North America, the great blue heron is the supersize version. Standing approximately 4.5 feet tall and having a wingspan up to 6.5 feet wide, this impressive water wader easily towers over its heron brethren. Other types of herons found in the U.S. are less than half its stature, ranging from about 18 inches tall as in the case of the green heron to 2 feet in height for the black-crowned night heron.

Called “great blue” because of its unique size and blue-gray feathers, the great blue heron is also one of the most highly adaptable creatures of its species. According to the National Audubon Society, “it thrives around all kinds of waters from subtropical mangrove swamps to desert rivers to the coastline of southern Alaska.” In addition, it has an expansive palate, eating just about anything it can catch, including fish, frogs, salamanders, turtles, small mammals, insects and other birds.

One great blue heron in Florida was even seen swiping a baby alligator from its mother in hopes of a quick lunch, while another in New Mexico downed a huge carp much larger than anyone would believe it could swallow.

In the bird world, you probably don’t get to be as tall as an average 10-year-old boy without taking in some heavy meals.

Like other wading birds when hunting, the great blue heron moves slowly along or in the water in search of food. It often becomes extremely still until it’s ready to strike, using its bill to either pierce or grab its prey with amazing speed. As it forages, it’s not unusual to see a great blue heron perch on floating objects or to alternatively hunt on land.

It's this ability to adapt to its environment and its variable diet that make the great blue also able to spend the winter months farther north than most herons. This is true even in conditions where waters freeze, the National Audubon Society’s website states. The Illinois Natural History Survey conducted by the Prairie Research Institute indicates that during the winter months in Illinois, great blue herons will reside in the southern portion of the state, occasionally taking up winter residence in central Illinois, and rarely residing in northern Illinois.

But don’t fret if you are looking to get a glimpse of these majestic creatures in the upper part of the state. By late February/early March, the majority of the great blue herons that take up residence in this area will begin their return.

During the warmer months in Will County, these herons flock in great numbers along any open body of water. "Almost everyone has seen one if they have ever been near a lake, pond, river or marsh," explained Bob Bryerton, a Forest Preserve interpretive naturalist. "A number of our preserves, including Lake Renwick Heron Rookery Nature Preserve in Plainfield, Goodenow Grove Nature Preserve in Crete Township and Monee Reservoir in Monee, have them all summer long."

Bryerton said that their association with swamps and marshes, their large size and quiet stalking while hunting "seem to make them watchers of the water. While not as old on the evolutionary scale as cranes, they still conjure up great wild images. Their impressive silhouettes when flying bring up thoughts of pterodactyls." 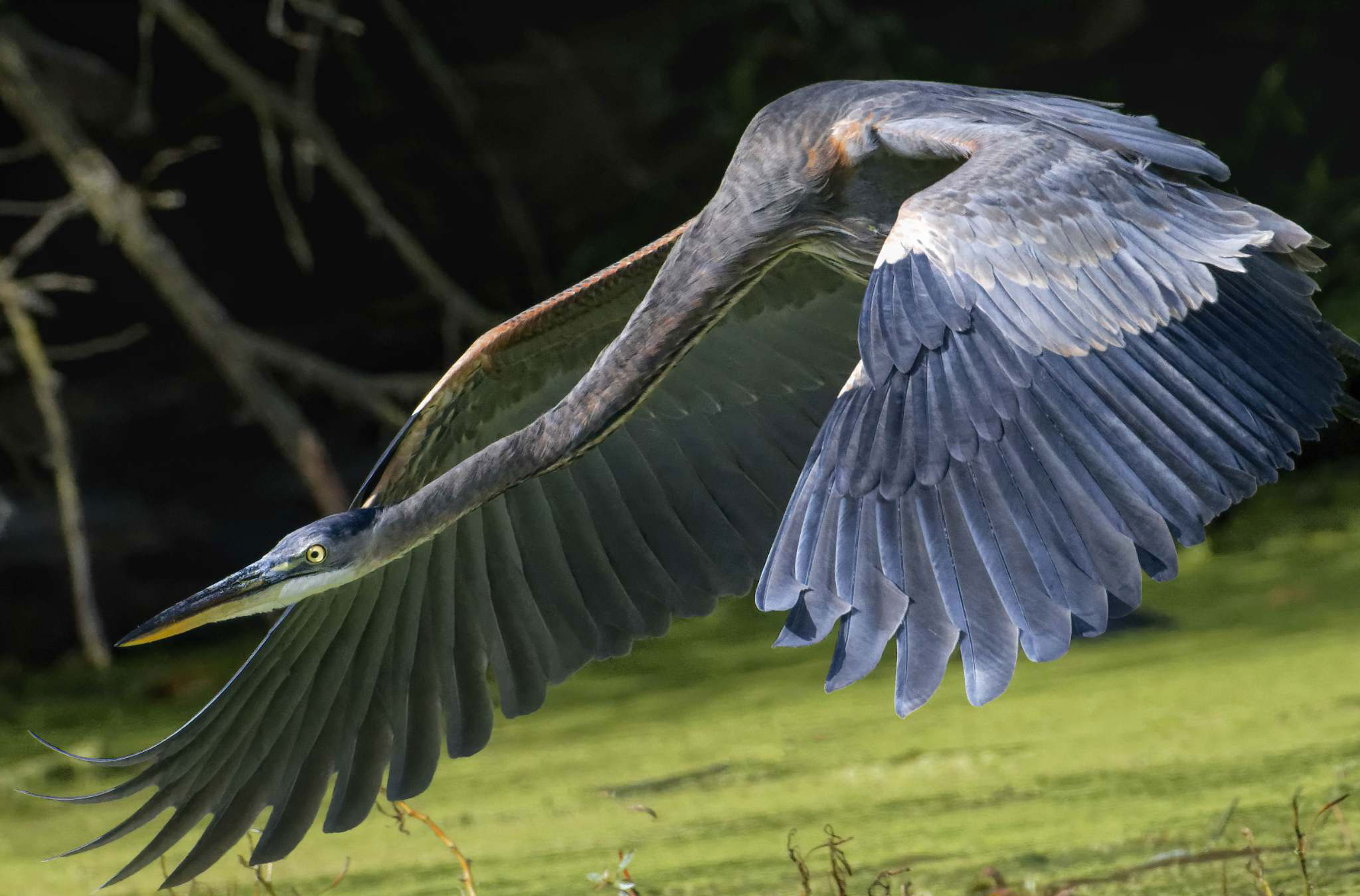 Great Facts About the Great Blue

• While tall in stature, the great blue heron weighs only about 5-6 pounds. Like all birds, it has hollow bones.

• A white form of the great blue heron, known as the "great white heron," is found along southern coastal Florida, the Yucatan Peninsula and in the Caribbean.

• Great blue herons have the ability to hunt at night as well, due to a high number of rod-type photoreceptors in their eyes which give them enhanced vision at night.

• When flying, great blue herons will position their neck into a “S” shape, with their legs stretched out behind them.

• Great blue herons can make a striking croaking sound when flying off, particularly if an unexpected visitor forces them to change locations. "It almost seems as if they're annoyed that someone showed up and disturbed their hunting," Bryerton said. "You don't even always get to see the bird. You just hear this squawk as the heron is leaving to let you know it was there."

• According to the Cornell Lab of Ornithology’s website, great blue herons’ chest feathers “continually grow and fray. The herons comb this ‘powder down’ with a fringed claw on their middle toe, using the down like a washcloth to remove fish slime and other oils from their feathers as they preen. Applying the powder to their underparts protects their feathers against the slime and oils of swamps.”

• During breeding season, male great blue herons gather most of the nesting material, presenting it to the females for weaving into a nest. Sticks gathered by the male can be as long as the heron itself, and nests can reach as large as 4 feet across and more than 3.5 feet deep. Despite their size though, these nests often blend in well with their surroundings, making them difficult for passersby to notice.

• The female great blue heron typically lays between three and six eggs in a single clutch, or group. However, the eggs may not be laid all at once, but over the course of several days.

• Baby great blue herons can fly when they are about two months old.

• The average age of a great blue heron is 15 years old. The oldest recorded great blue was reported to be at least 24 years, 6 months old. 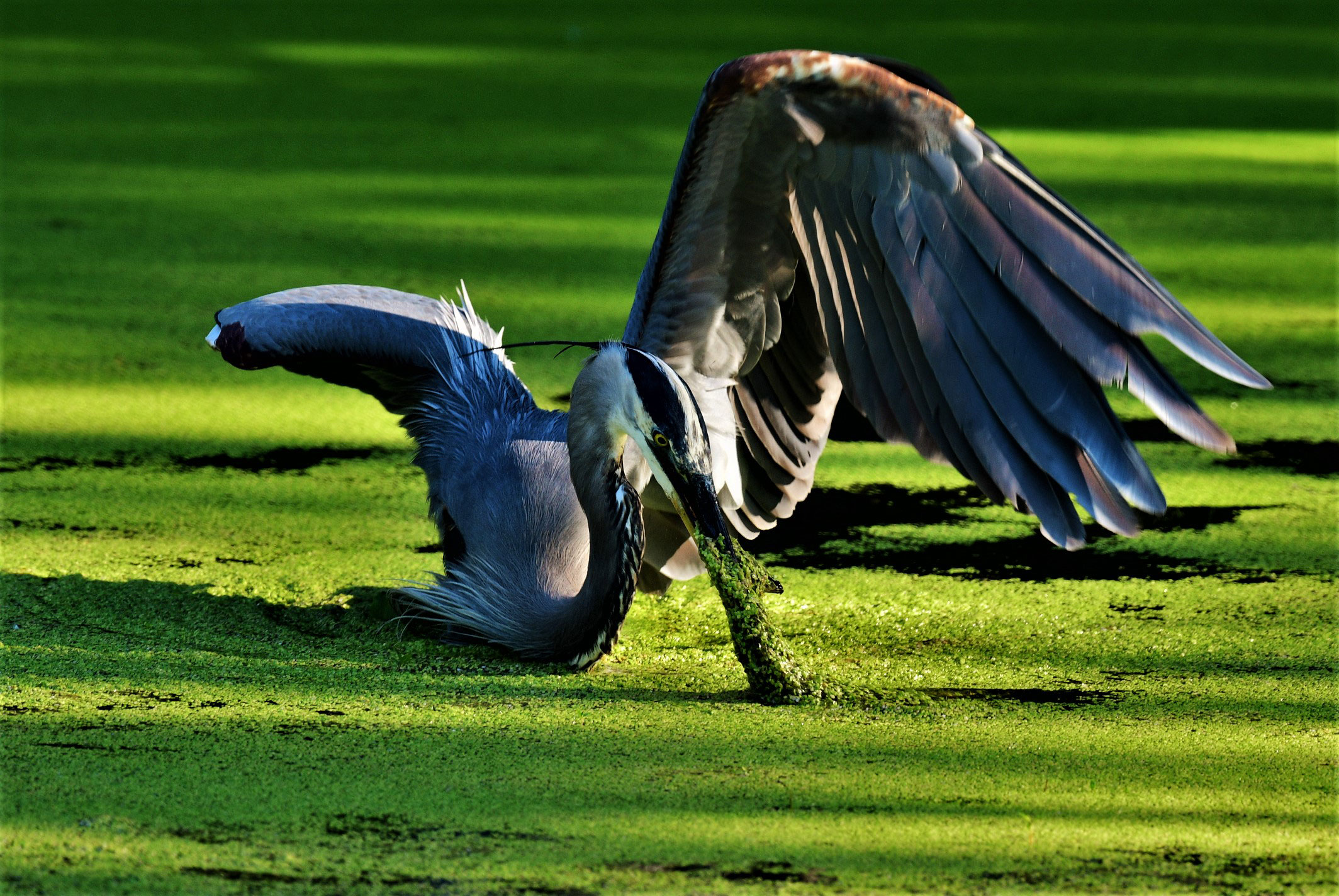 Learn more about the variety of birds that call Will County home by attending one or more of the Forest Preserve’s upcoming bird viewing programs.