There are few things more powerful and majestic than the bison

Centuries ago, when Illinois lived up to its nickname of “The Prairie State” much more than it does today, bison roamed the state freely, grazing on the grasses and plants that covered the landscape.

Bison are no longer part of the landscape in Illinois, but there are a few spots where you can see these mammoth mammals, where the herds are controlled as part of conservation programs. In Will County, a herd of bison lives at Midewin National Tallgrass Prairie in Wilmington as part of a 20-year experiment in restoring the landscape to its native tallgrass prairie. A small herd also lives in Kane County at Fermilab in Batavia, and you can also see bison at Nachusa Grasslands in Lee and Ogle counties in north central Illinois.

Bison have a long and complicated history in the United States. Prior to 1800, it is estimated that between 30 million and 100 million bison lived across North America, with the highest concentration in the Great Plains, according to the National Zoo. Millions of these creatures were slaughtered, many by the U.S. government as part of an effort to destroy the livelihood of Native tribes across the Great Plains.

The bison population has recovered, but their range today is only about 1 percent of what it once was. The total bison population in the United States is between 400,000 and 500,000, with about 30,000 living in public and private herds that are managed for conservation purposes, the park service reports. About 400,000 bison are raised as livestock for their meat.

The only place in the United States where bison have lived continuously since prehistoric times is Yellowstone National Park, where the population of these animals fluctuates between 2,300 and 5,500, according to the park service. These herds are significant to several Native tribes, which revere the bison as descendants of the herds that once freely roamed America’s grasslands.

In Illinois, bison herds roamed the landscape from the late 17th century until the early 19th century, according to the Illinois State Museum. According to historical accounts, they disappeared from the state by 1820 as a result of intensive hunting. They were absent from the state for more than 100 years until a small herd was introduced at Fermilab in 1969. The herd at Nachusa Grasslands was first introduced to a 1,500-acre conservation site in 2014, and Midewin introduced a herd at its tallgrass prairie in 2015. 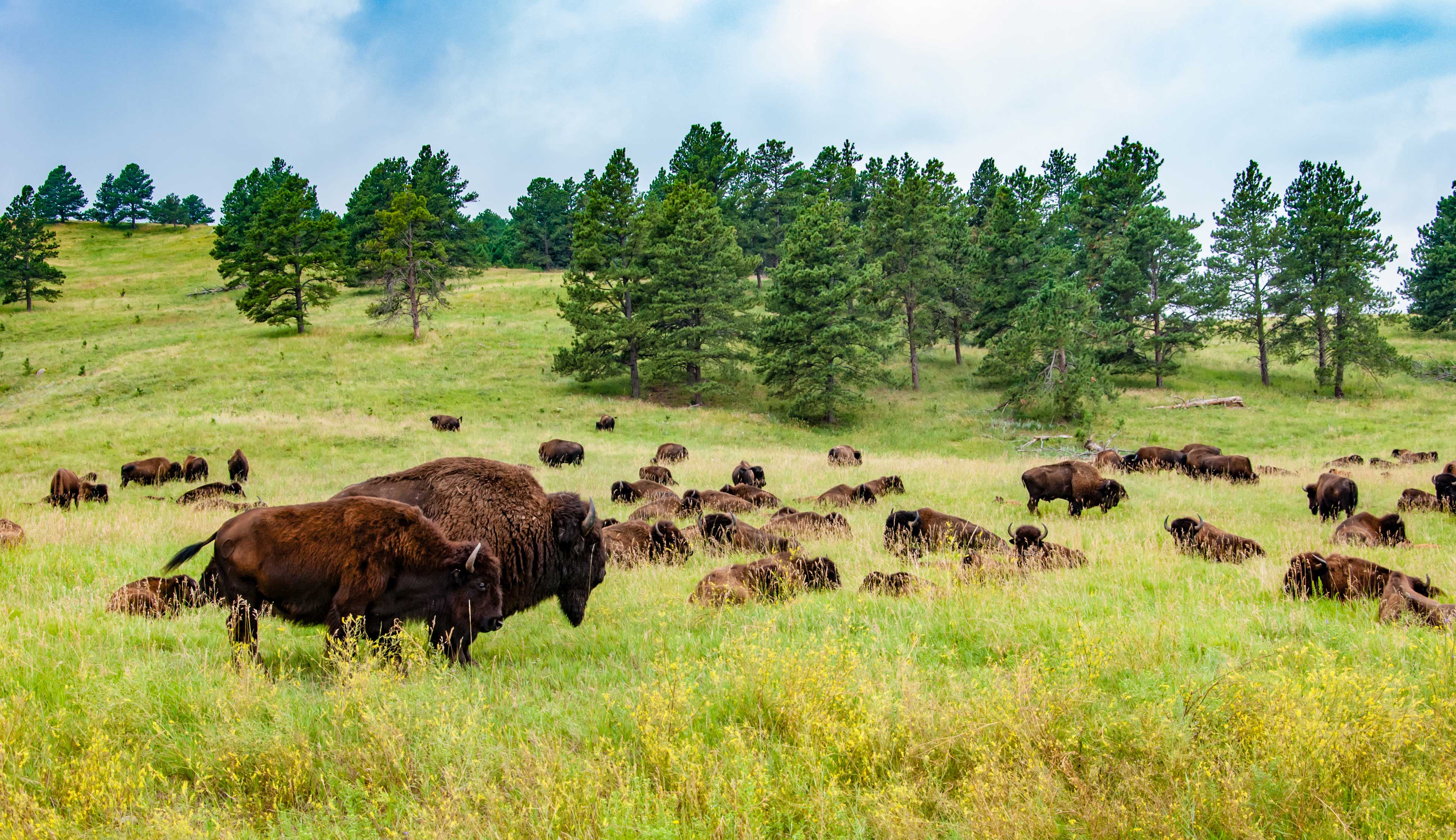 Buffalo and bison aren’t synonyms. Although the terms are used interchangeably by many people, buffalos and bison are different and distinct species, and they don’t even live on the same continents, according to the National Zoo.

Bison and buffalos both belong to the Bovidae family of mammals, but they are not closely related. Bison live in North America and Europe, while buffalos, which include water buffalos and Cape buffalos, are native to Asia and Africa.

The source of the common misconception that buffalos and bison are one and the same isn’t certain, but historians believe it may stem from early European explorers, who called the mammals buffalos, the National Zoo reports. Another theory is that the term buffalo stems from the French word for beef, which is “boeuf,” according to the National Park Service.

No matter how the misnomer got started, songs like “Home on the Range,” with the opening lyric, “Oh, give me a home where the buffalo roam,” have certainly helped perpetuate it. The well-known patriotic tune, sung by generations of elementary school students and many iconic American musical performers, gets it wrong right out of the gate, calling the bison that historically dotted the American plains buffalos.

Bison by the numbers 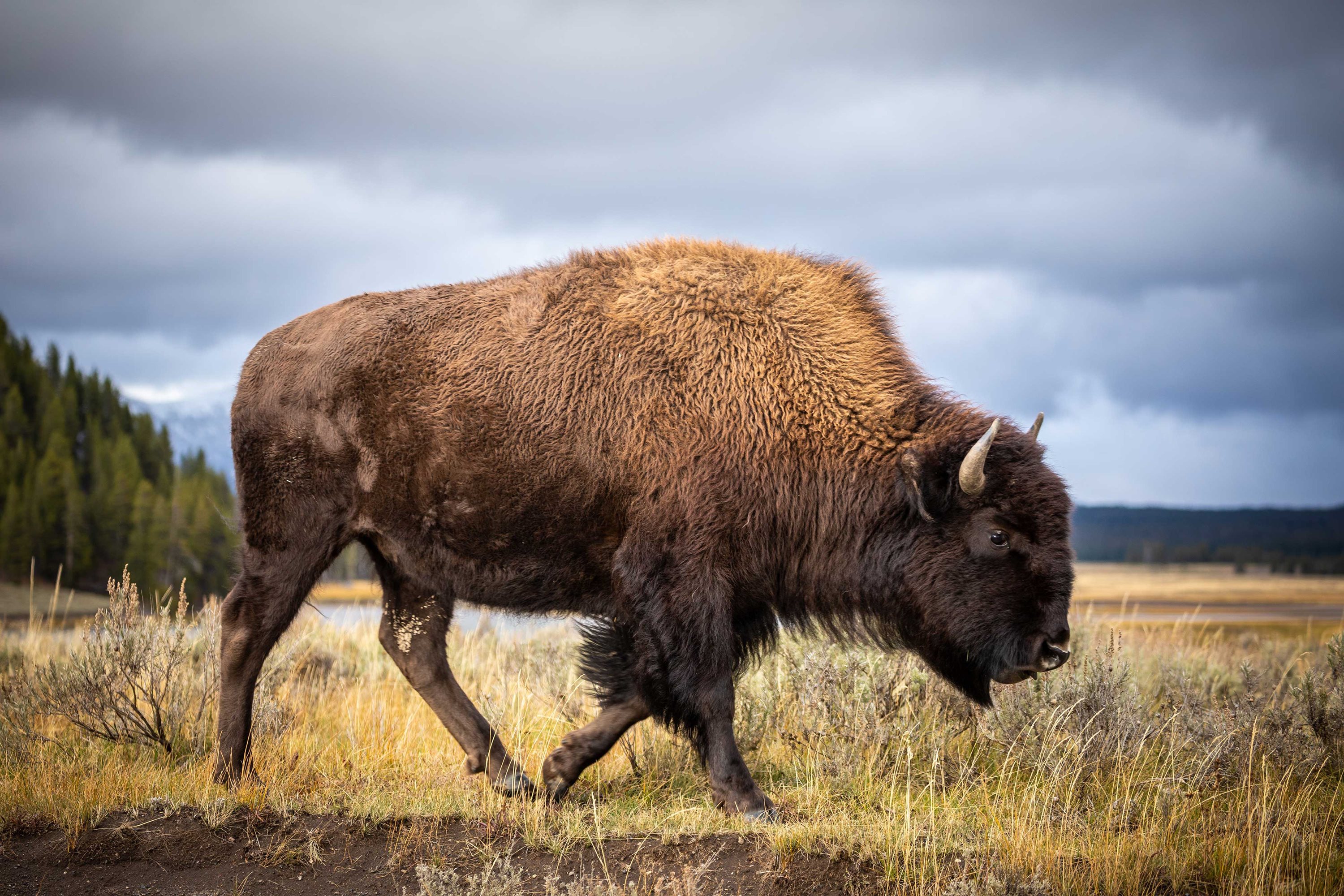 Bison are the largest and heaviest land mammals in North America. They stand between 5 feet and 6½ feet tall at their shoulders. Males are usually considerably larger than females. A male bison can be between 9 feet and 12½ feet long and weigh 2,000 pounds, according to the National Zoo. Females are between 7 feet and 10 feet long and can weigh as much as 1,000 pounds.

In the wild, bison typically live between 15 and 20 years, the zoo reports. Healthy adults have no predators, but old and sick bison and bison calves are sometimes hunted by bears, mountain lions and wolves. 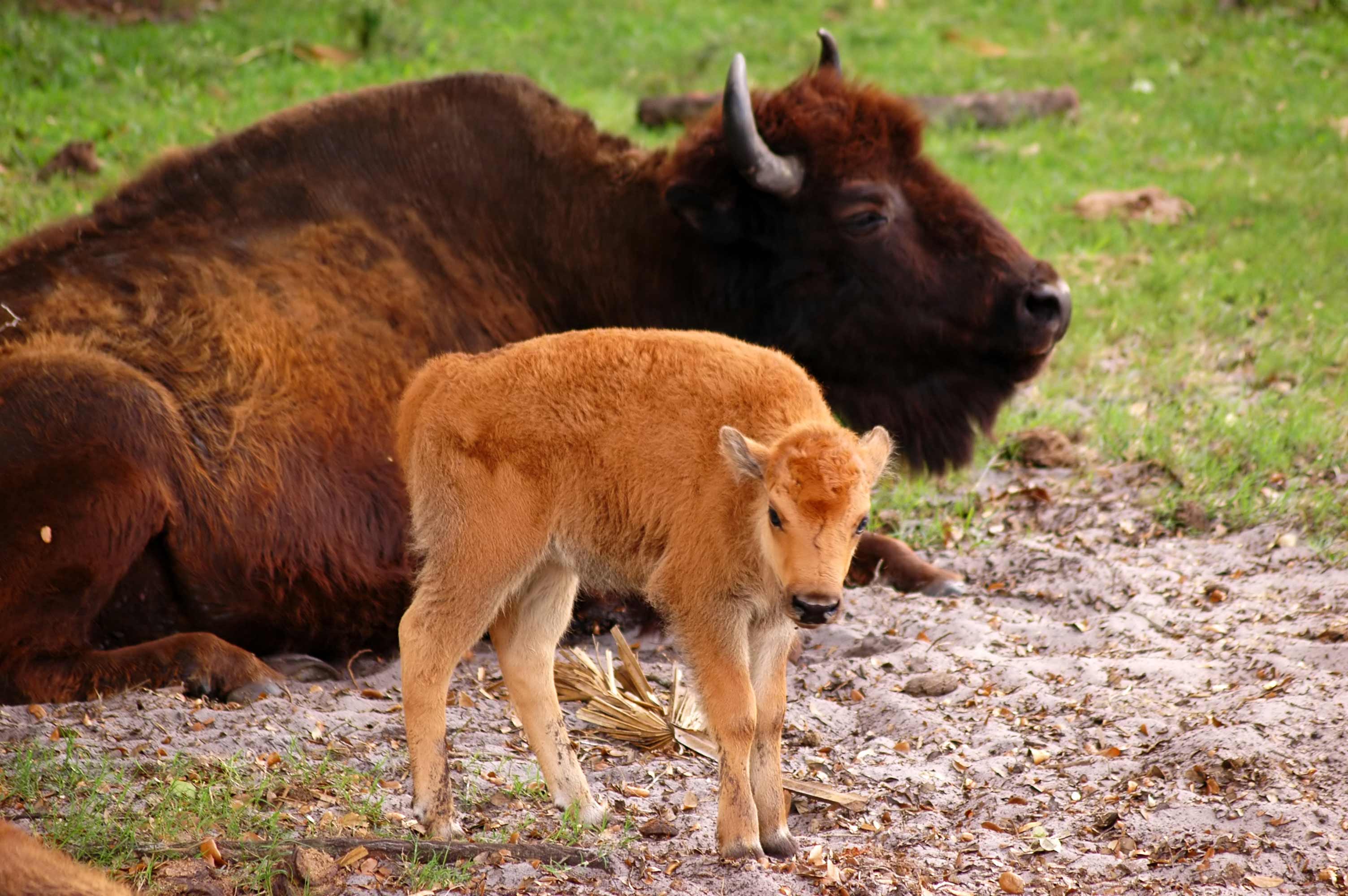 Bison typically live in groups, called bands, arranged by sex, age, season and habitat, according to the National Zoo. Old bison often live alone, but younger bison live in bands, and the bands often congregate to form large herds, particularly in spring and fall when searching for food and water and also during breeding season. Female bison often form bands with younger, immature bison. Males typically form their own bands with as many as 30 bison.

When a band or herd of bison is traveling across the land, they form a line and move in this formation. They are easily able to cross rivers and streams, both because of their size and because they are skilled swimmers.
Mating season for bison is from June to September. During this time, males show their dominance to try to attract a mate by fighting with other bulls and bellowing and wallowing. After mating, the male bison separate from the herd and spend their time either alone or in small bands with other mature males.

The gestation period for bison lasts about nine months, and females give birth to one calf. Females give birth away from the herd, in a secluded spot where they will stay for a few days, until the calf can keep up with the herd as the group roams. Calves nurse exclusively for the first seven or eight months of their lives and are fully weaned after a year. They stay with their mothers until the spring after they are born. 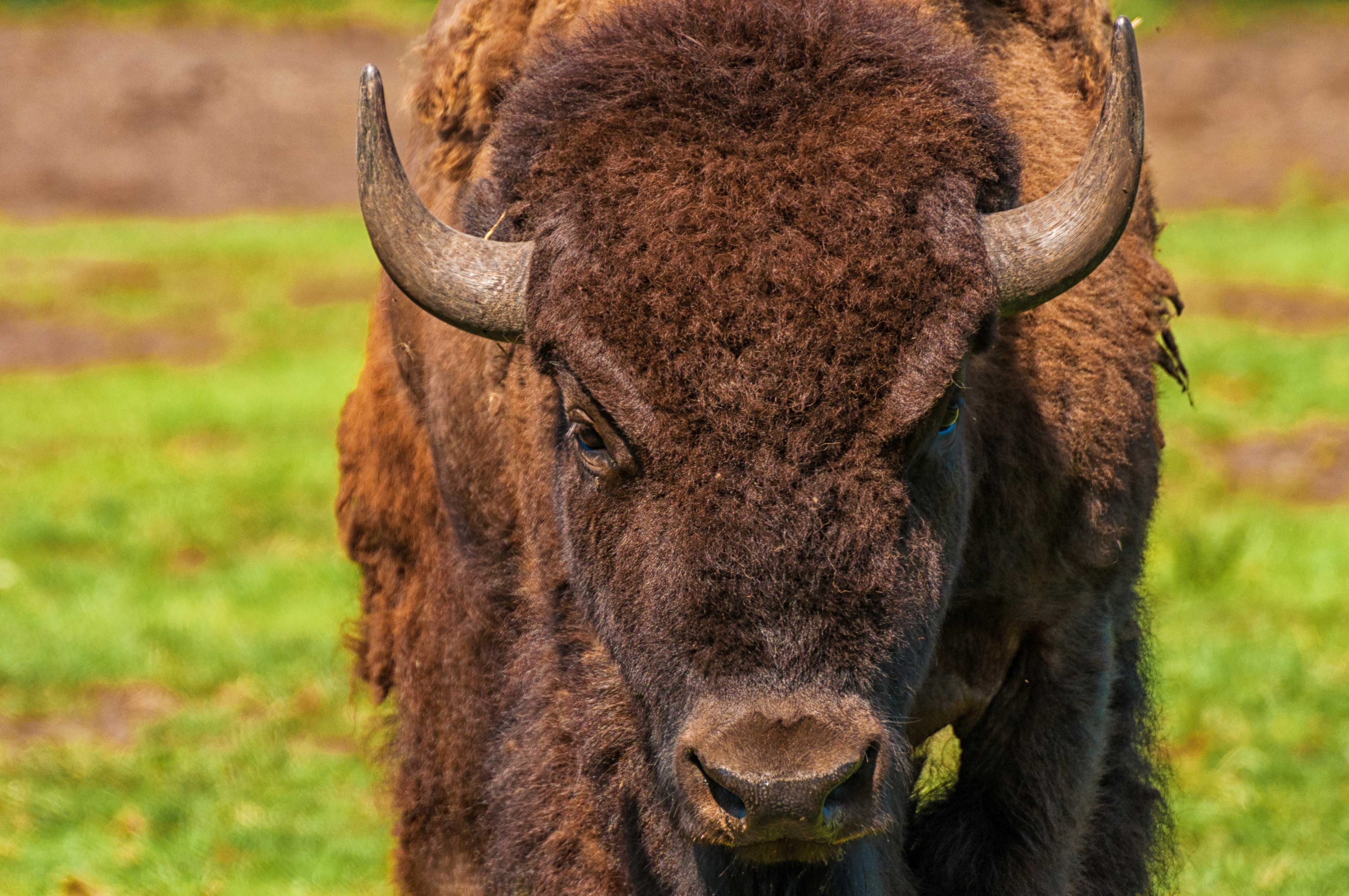 Bison are herbivores, and they graze year-round, the National Zoo reports. They eat mostly grasses, but will also eat lichens, flowering plants and woody plant material. In the winter, when snow covers their grazing grounds, they sweep their heads from side to side to clear an area from which to eat.

Bison typically graze for food in the morning and again in the evening. During the day, they rest and chew cud, which is part of their digestive process. During the rest periods, they often wallow in mud and dusty areas to stay cool.

Despite their enormous size, bison are fast, reaching speeds up to 40 miles per hour. And although they may appear docile and calm, they can be dangerous, particularly if they are frightened or feel threatened.

At Yellowstone and other areas out West, bears are thought to be the biggest threat for attacking humans, but bison pose a real risk as well. In fact, bison have injured more people at Yellowstone than any other animal, the parks service reports.

One reason bison pose a risk to humans is because they are unpredictable. In Illinois, bison herds are behind fences, which prevents encounters with onlookers. In the West, in places like Wyoming and South Dakota, bison herds roam free in some places. In these areas, people should use caution if they encounter bison. Always stay at least 25 yards away from the animals, and never feed bison or any other wildlife, the parks service advises.