Animals amaze us every day in a multitude of ways, but sometimes they are downright disgusting. And there’s probably nothing more repulsive than watching an animal eat feces, whether it’s its own or from another critter.

Dogs are well-known poop eaters, but they certainly aren’t alone. So what makes them dine on their own dung? It depends on the species, but generally speaking the feces serves as a source of nutrients, according to National Geographic.

Animals eating feces is enough of a well-known phenomenon that there’s a word for it: coprophagy. It has been documented in rabbits and hares, also called lagomorphs; rodents; non-human primates including orangutans, chimpanzees and gorillas; some pachyderms; and, of course, dogs, according to Live Science.

Part of a Healthy Diet 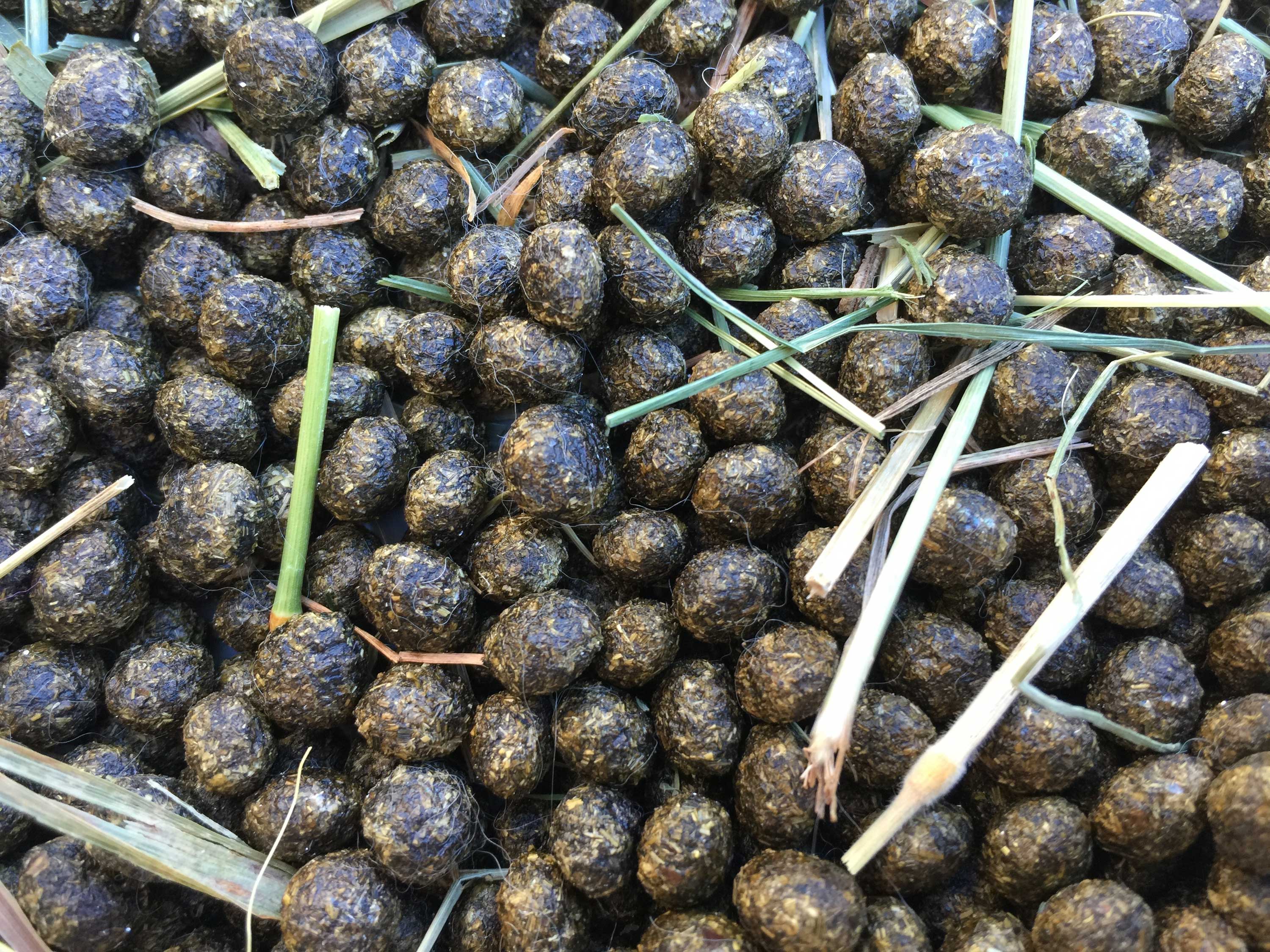 Rabbits and hares serve as a good example of a coprophagic animal because the reason behind their dung dining is well understood. In fact, for rabbits, eating their own feces is necessary for survival. That’s because rabbits and other lagomorphs have a high rate of metabolism, and their digestive systems aren’t able to fully break down food before it is passed as excrement, National Geographic reports. These rabbit pellets, called cecotropes, are full of nutrition, so the rabbits eat them as a regular part of their diet, the same way a cow chews its cud.

Eating the cecotropes is how they maximize the nutritional benefits of the grasses and other plant matter they eat. These pellets are one of two types of rabbit excrement, and the only kind they eat, according to the McGill University Office for Science and Society. Cecotropes are soft and black, while the second form of excrement is the small, hard black pellets you often see in small piles on the ground.

And while chimpanzees don’t regularly eat their feces, they do from time to time, for the same reason as rabbits: it is only partially digested and there’s more nutrition to gain from eating some of the undigested portions, National Geographic reports. 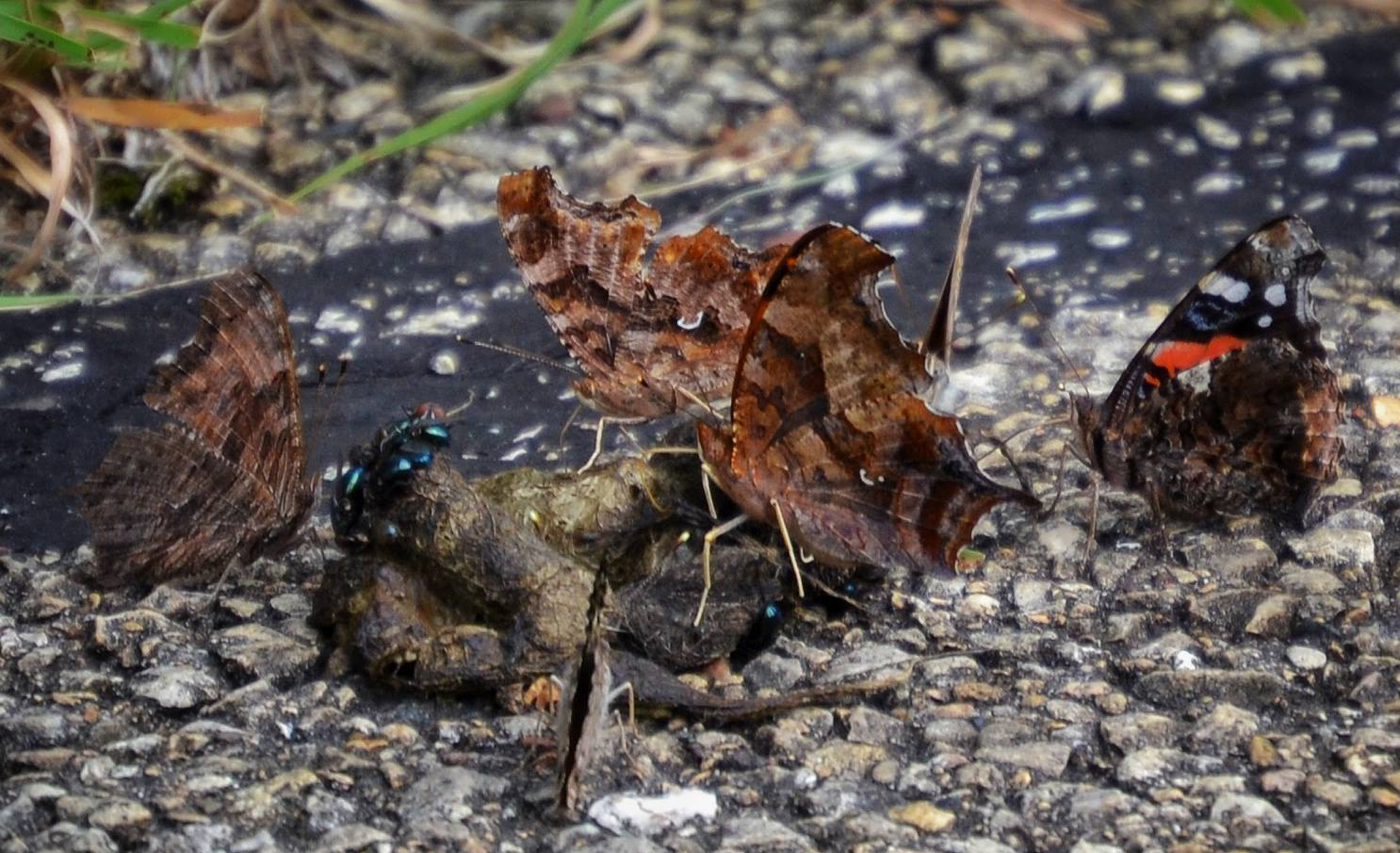 Common and question mark butterfly digging in on some feces. (Photo by Suzy Lyttle)

Dung beetles are another species famous for eating feces, but they are different from rabbits in that they eat other animals’ poop instead of their own. Thousands of dung beetle species exist in the world on every continent except Antarctica, with about 75 species native to North America, according to the San Diego Zoo.

Most dung beetles eat the feces of animals that eat plants, although some feast on manure from carnivores and a few don’t eat feces at all, instead dining on mushrooms, decaying fruits and plant matter as well as animal carcasses. Similarly, butterflies meet most of their nutritional needs from nectar and fruit, but they also sometimes dine on scat to get additional nutrients.

SCAT-TERGORIES: THE SCOOP ON POOP

For dung beetles, timing is everything, and the fresher the feces the better, the San Diego Zoo reports. That’s because they feed on the liquid found within a manure pile, and the longer the excrement sits out, the drier it gets.

Dung beetles don’t just rely on poop for their diet; dung is also key to their reproduction. According to the San Diego Zoo, most species of dung beetles either lay their eggs in or on manure. Some even bury the dung underground to protect the eggs. In fact, in some parts of Texas, more than 80 percent of cow manure is buried by dung beetles. Without this important action, much of the ground would be covered with hard, dry manure, which would stifle plant growth.

While most animals don’t eat feces, some young animals, including hippo and elephant calves, do eat excrement from their mothers or from other animals in their herd during the transition from consuming their mothers’ milk to a solid diet, Live Science reports.

For these young animals, eating feces helps populate their digestive systems with the healthy bacteria that aids in digestion.

Puppies, too, often eat feces, although they usually outgrow the habit by about the time they are nine months old, according to the American Kennel Club.

When young dogs eat poop — either theirs or that of other dogs and animals — it’s a normal part of them learning about the world around them, the AKC reports. In some cases, it may even be a case of them copying their mothers, who often eat their puppies’ feces immediately after they are born.

In adulthood, though, it’s more uncommon and could signal a problem. If your dog doesn’t have a reputation as a poop eater but suddenly starts engaging in the habit, it’s worth a trip to the vet because it may be a sign of a health issue, the AKC advises.

Certain medical conditions, including diabetes, parasitic infections, thyroid diseases and problems with absorbing nutrients, may cause a dog to start eating feces. Stress or behavioral issues, including isolation, confinement and anxiety, can also cause the problem, according to the AKC.

Of course, some dogs just like to do it, whether it’s for attention or for other reasons. And although you may find the habit repulsive, you shouldn’t be too concerned if health issues are ruled out. You can discourage the behavior by keeping the dog’s living area clean and keeping them supervised or on a leash while outside, the AKC advises. You can also train your dog to listen to commands to come when called to help prevent it.