From what they eat to where they live, get to know North America's most common deer

The sight of a deer in the distance often causes us to stop in our tracks, taking a second to admire these beautiful creatures from afar. But be still and quiet, because white-tailed deer are nervous and shy, startling easily at the sight or sound of humans and other potential predators.

Today, we take deer for granted as part of our environment, always present although often unseen. They have a long history in North America, but they haven’t always thrived here in Illinois. Learn more about white-tailed deer and the role they play in our natural habitat. 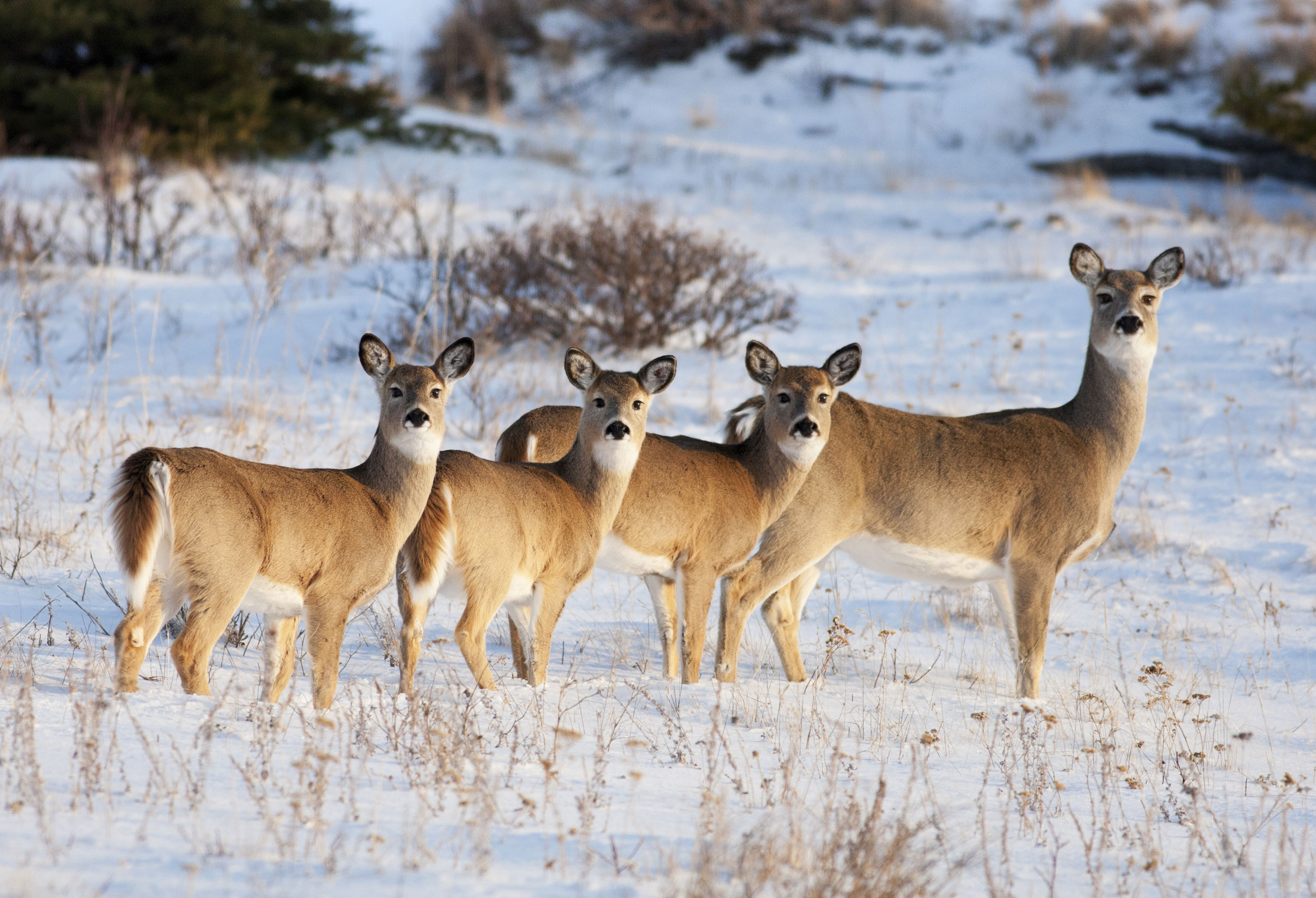 Although it hasn’t always been the case, deer today are common throughout all their natural range. While no precise population counts exist for white-tailed deer, it is estimated that between 8 million and 15 million of these hooved animals live across North America, according to the University of Michigan’s Animal Diversity Web.

In Illinois, the state’s Department of Natural Resources has adopted a deer management policy to “maintain a healthy and balanced deer herd that can exist in perpetuity and provide recreational opportunities, while also balancing people’s broad range of values and their concerns about crop damage, vehicle accidents and damage to ecosystems,” according to the state’s Wildlife Illinois website.

Hunting and other measures are necessary to maintain a healthy deer population because they can exceed their carrying capacity, which is the number of organisms a particular area can support without degrading the environment, according to Wildlife Illinois. In our area, the deer population can exceed the carrying capacity for a few reasons. First, if we experience mild winters, the deer have an abundant food supply, especially in agricultural areas. And we also no longer have a large supply of carnivores, such as wolves or cougars, that are natural predators of deer, which naturally helps control their population.

While the deer population today requires management to prevent it from getting so high that they are destructive to the environment including to the health of the herd, the opposite was true at the turn of the 20th century. In the early 1900s, deer were a rare sight in Illinois, so rare that the Illinois State Museum had to secure specimens from Wisconsin to be included in an exhibit.

Deer populations were critically low for a number of reasons, including changes in how land across the state was being used and developed and the lack of hunting regulations. In realizing the deer population was decimated, lawmakers enacted laws to outlaw hunting but, even so, it took decades for the population to sufficiently recover. It wasn’t until 1957 that Illinois was able to establish a deer hunting season, the Illinois State Museum reports.

Today, deer hunting remains a reliable and responsible way to control the state’s deer population, according to Wildlife Illinois. The state’s deer hunting program is implemented and monitored by the Illinois Department of Natural Resources. In addition to hunting, local government agencies, including the Forest Preserve District of Will County, have established their own deer management programs to maintain the health and well-being of the varied forest preserve habitats, including woodlands, prairies and savannas.

A healthy habitat and a healthy diet 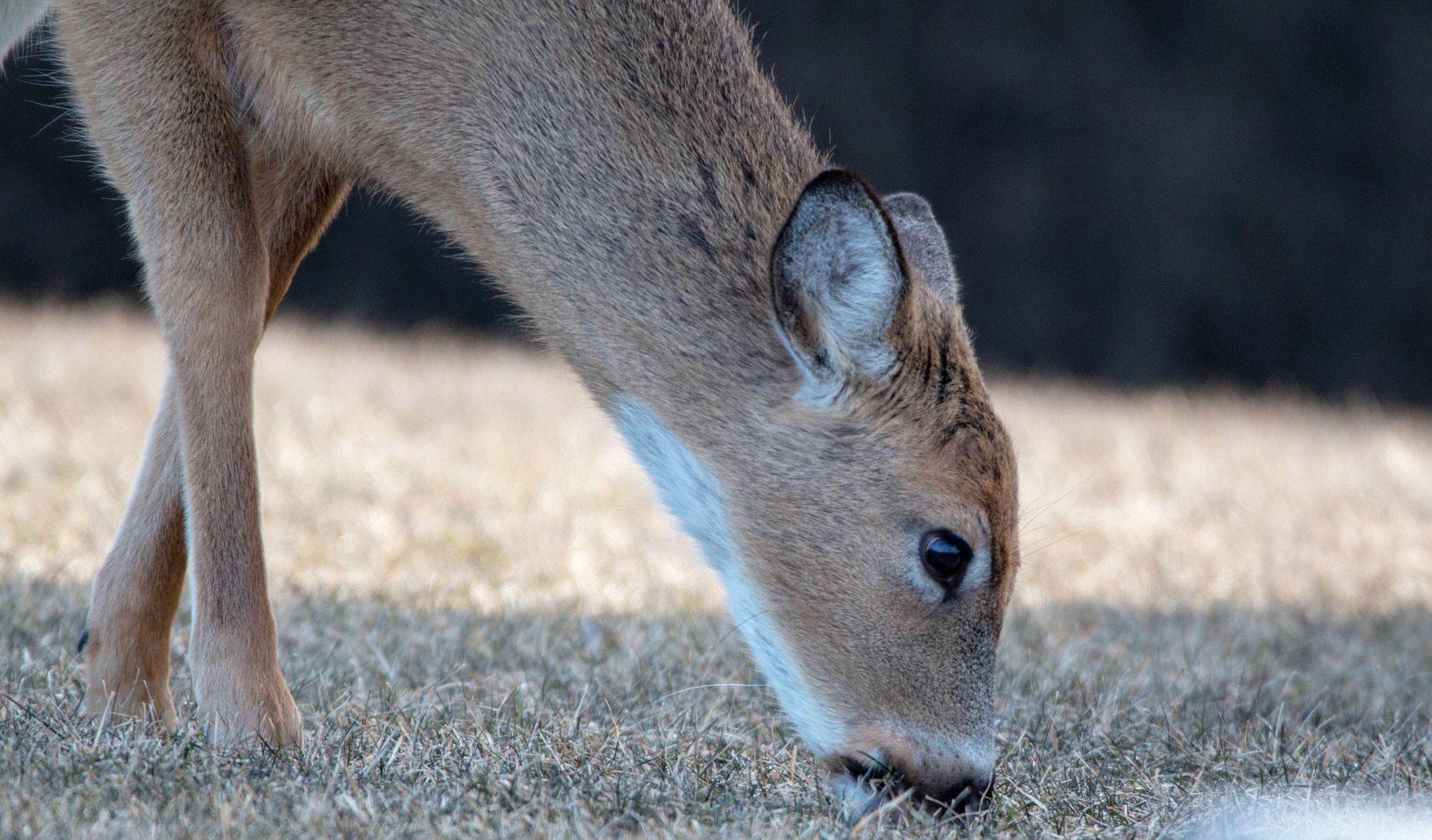 White-tailed deer can survive and thrive in a variety of habitats, including woodlands, grasslands, swamplands and even more desert-like areas, according to Animal Diversity Web. Ideally, they prefer areas with dense thickets, where they can easily move about but also take cover, and edges, where they can browse for food.

In Illinois, deer are well adapted to the mix of urban, suburban, rural, forested and agricultural pockets, Wildlife Illinois reports. About 32 percent of the land in Illinois is considered good habitat for deer, with an additional 16 percent marginal.

A good habitat includes an ample supply of food for deer. As herbivores, their diet can vary slightly based on the season and what’s available in their home range. For example, in suburban areas they eat primarily grasses, while in agricultural areas they may rely more on crops such as corn and soybeans, according to Illinois Wildlife. They also eat twigs, leaves and fruits such as crabapple and apples. Acorns can also be an important food source for woodland deer because they are high in fat, which helps them build fat reserves. However, deer that live in more agricultural areas where crops provide a good food supply do not rely on acorns.

In the summer and fall, they eat more high-protein foods to bulk up in advance of mating season and to help them survive winter, when food is scarce. When snow covers the ground, deer have more difficulty finding food and often have to paw at the ground to get to the vegetation under the snow. 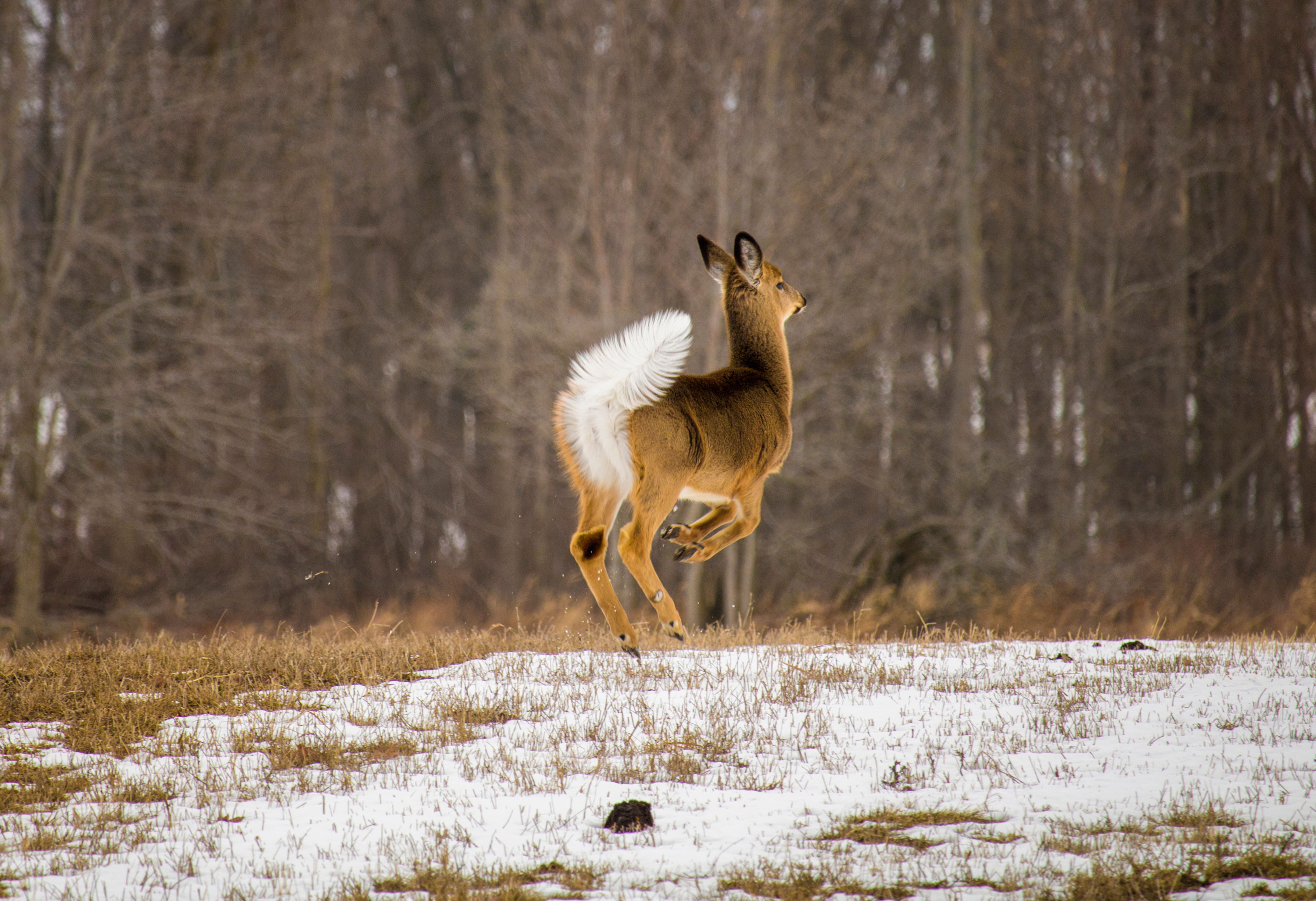 The white-tailed deer is, quite obviously, named for the physical features of its tail, but there’s more to a deer’s tail than just the color. The tails can be between 4 and 11 inches long, and only the underside of the tail is white. They only flash the white part when they are startled or alarmed, according to National Geographic.

Other than that flash of white on their tails, around their eyes, behind their nose, in their ears and along the inside of their legs, white-tailed deer are brown in color, although the shade can range from grayish-brown to reddish-brown, according to Animal Diversity Web.

Deer typically stand about 2 ½ to 3 ½ feet tall at the shoulder, and they weigh between 125 pounds and 300 pounds. Males are larger than females, and they are the only ones to grow antlers each year. White-tailed deer are the smallest of the deer found in North America, according to National Geographic. Other deer include mule deer, caribou, elk and moose. 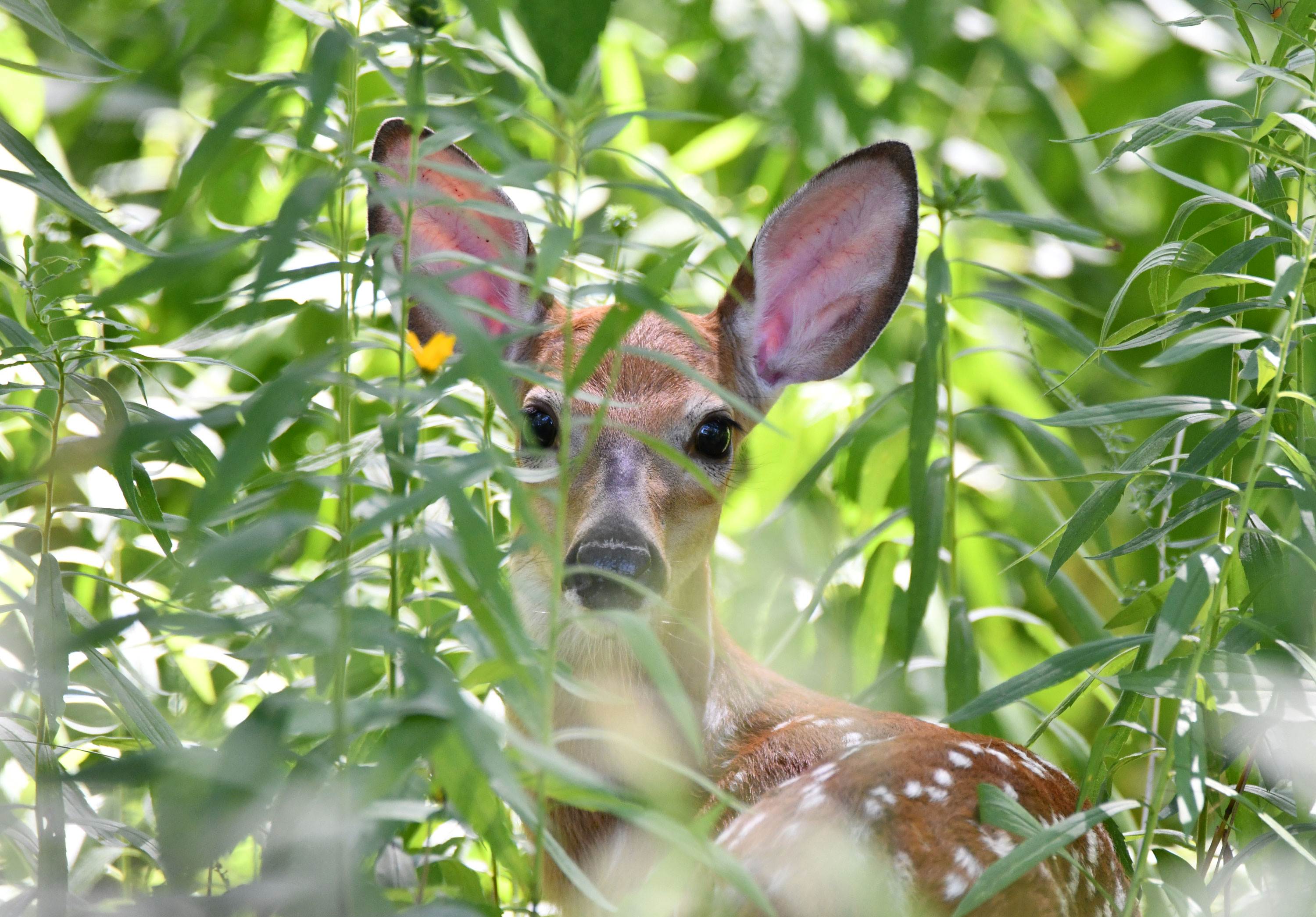 White-tailed deer are shy, preferring to remain unseen. They are crepuscular, which means they are most active from dusk to dawn, when they browse for food among the vegetation. Deer are known to use the same paths as they move about for food, but they avoid using the same areas when they bed down for rest, according to Animal Diversity Web.

Deer are considered mostly solitary, although the does and their fawns create family units that stay together for a year or two after birth. It’s also not unusual to see large groups of deer foraging together.

Deer are fast and agile, able to run at speeds of 30 miles per hour. They can leap up to 10 feet in the air and jump as far as 30 feet, National Geographic reports. They are also able to swim.

We think of deer as quiet creatures, but they do communicate with other deer using different vocalizations, including bleats, grunts and wheezes. A deer that is injured will typically call out loudly, according to Animal Diversity Web. Deer are also able to communicate with one another by secreting oils from scent glands on their hooves. These secretions are the strongest during mating season, which runs from October to January. 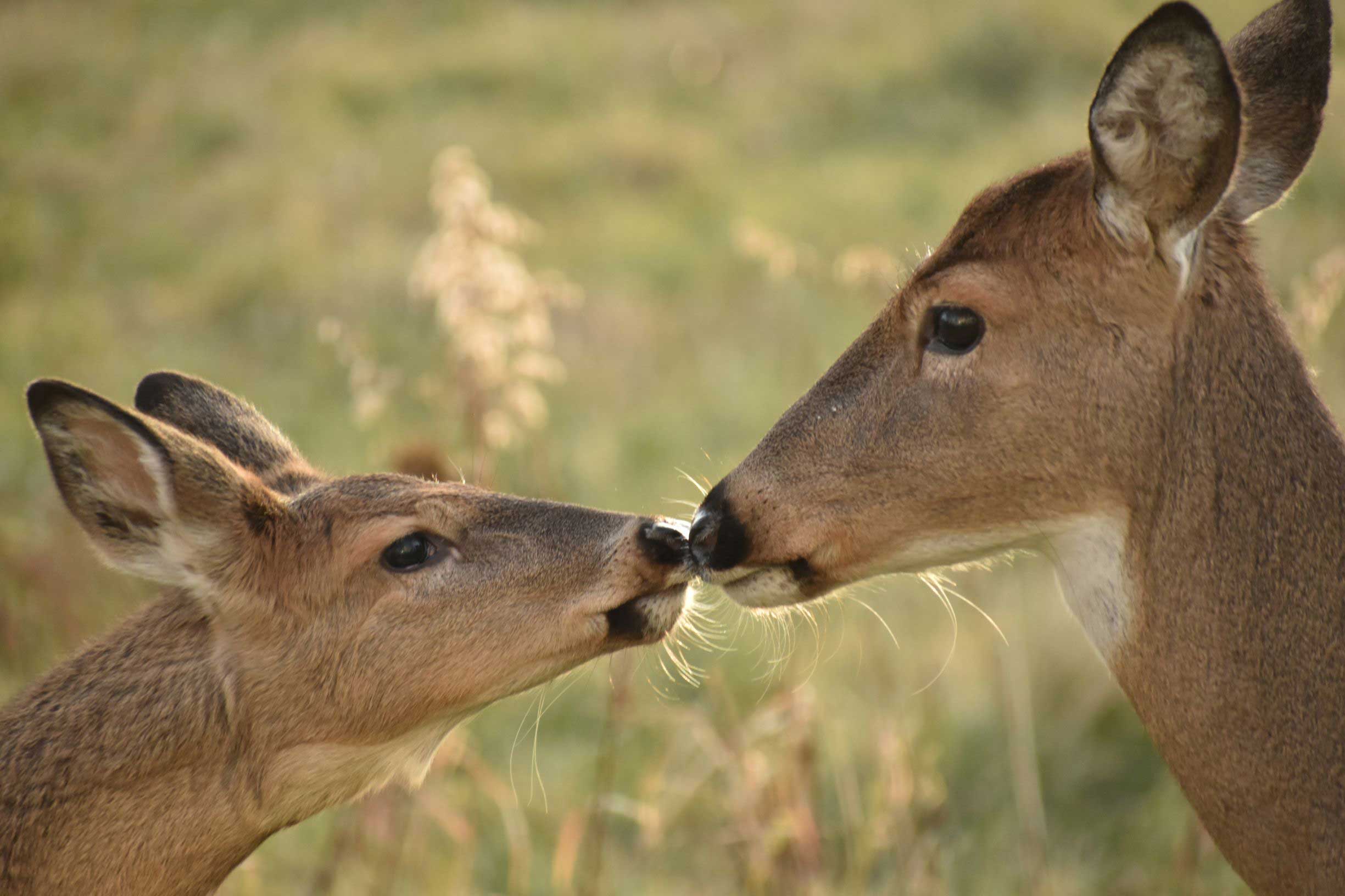 The doting, motherly nature of female deer was made famous in the Disney classic “Bambi,” but Bambi and his family were not the white-tailed deer that live across Illinois and much of North America. Bambi is a mule deer, which is a related species of deer that populates much of the western United States, particularly the Rocky Mountain region, according to the National Wildlife Federation.

Mule deer and white-tailed deer are quite similar in appearance, although mule deer have larger ears and black-tipped tails. The does of both species are also attentive mothers, although being a good mother involves often leaving the fawns alone to help prevent them from being discovered by predators such as coyotes. In fact, many so-called “rescued fawns” were not actually abandoned, they had simply been left alone to help protect them, Wildlife Illinois reports.

A doe typically has between one and three fawns, and they are born weighing between 4 pounds and 7 pounds, according to Wildlife Illinois. The babies can stand and even run just a few hours after birth, but they mostly remain motionless and hidden away for a few weeks after birth. The dotted white coat fawns are known for is part of their camouflage. The white dots mimic the broken sunlight on the forest floor where the fawns are hidden to keep them safe.

For the first few weeks of their life, the mothers will return to their fawns twice a day to nurse them. After about a month, the fawns will begin to eat grass and other vegetation, often following their mothers around while foraging for food. Young male deer will leave their mothers after about a year, while the females stay by their mothers’ sides for two years. 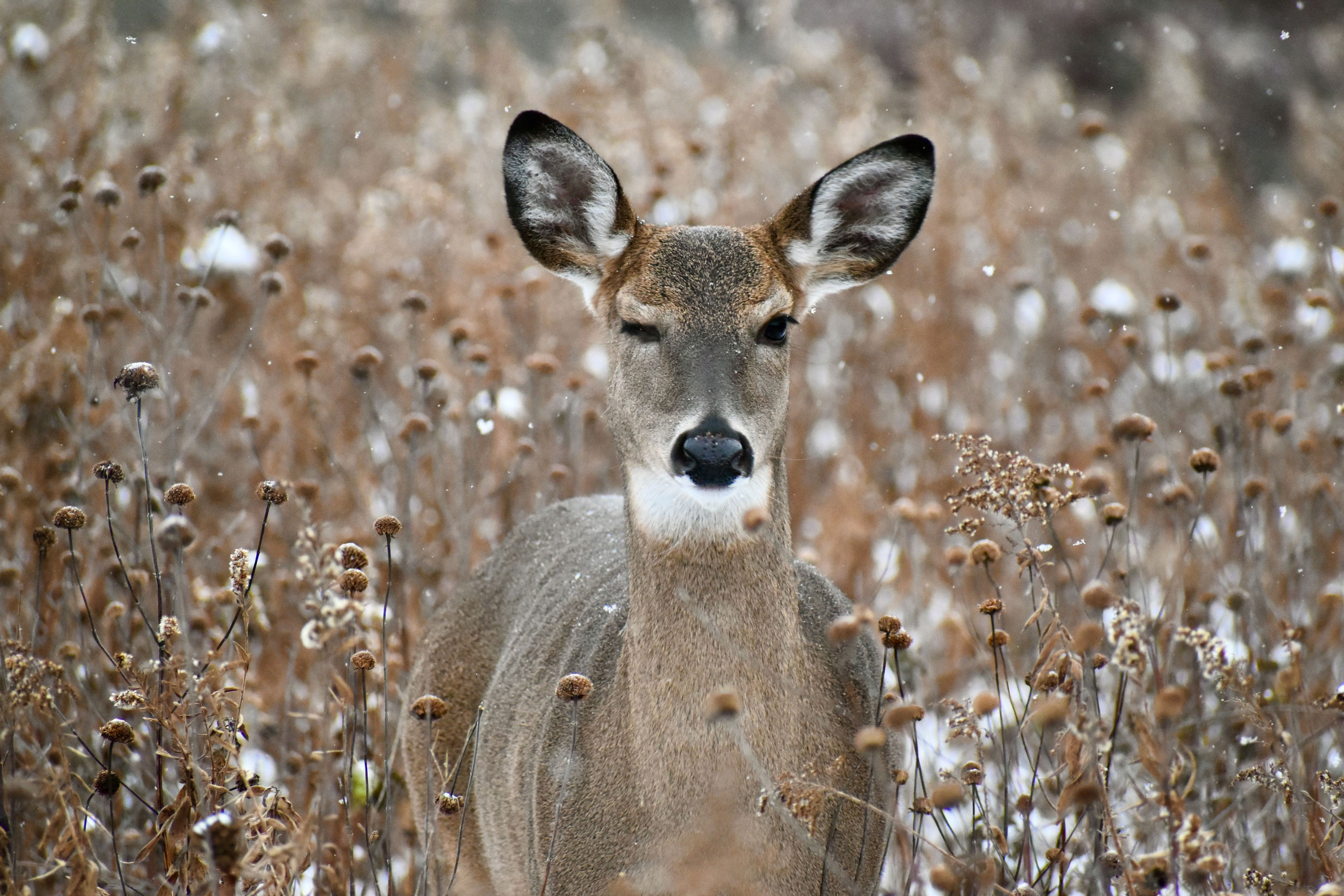 Historically, deer were important to Native Americans and then to early settlers because they provided a reliable food source and their hides and bones could also be used for blankets, tools and other necessary supplies, according to the Missouri Department of Conservation. Today, deer are beloved by many and provide recreational opportunities including wildlife viewing.

Deer serve as prey for coyotes in Illinois, but they have few other predators in our state. They help encourage plant growth when they forage on tree branches and buds, but in severe winters or when their population is too great they can be destructive to the vegetation in their habitat.