These mighty insects play an important role in the environment

Nothing can ruin a picnic faster than ants, at least if cartoons are to be believed.

Although an army of ants may not be able to carry away your al fresco lunch piece by piece, these mighty insects are exceptionally strong relative to their size. A single ant can carry up to 50 times its body weight, and working together with other ants they can move even larger objects, National Geographic reports.

Most of us don’t give ants a second thought unless an invasion of them happens to be ruining our time outside. In reality, though, ants are a critically important part of the ecosystem. Ants are essential for turning and aerating soil, even more so than earthworms in some areas. They help spread plant seeds and pollinate plants and flowers, and many ants are decomposers, creating healthy habitats in the soil all around us, according to the San Diego Zoo. Lastly, ants serve as an important food source for many animals, and not just for anteaters.

Ants are social insects that live in large colonies. As many as 8 million ants can live in a single colony, and each ant has a specific role to perform, according to the San Diego Zoo.

The social behavior of ants allows them to work together to achieve the common goals of survival, growth and reproduction, reports Arizona State University.

Like beehives, ant colonies have queens, and the queens’ responsibility is to lay eggs to allow the colony to survive, according to National Geographic. The worker ants in a colony are all female, and those are the ants we normally see outside the nest. The worker ants are responsible for foraging for food, building the nest, protecting the colony and caring for the queen’s offspring. Male ants typically have just one purpose to the colony, mating with the queen, and after this function is complete the male ants may die.

Ants must communicate with one another to keep the colony organized. Rather than talking or otherwise vocalizing, ants secrete chemicals called pheromones to communicate with other ants, according to the San Diego Zoo. These pheromones each have a scent that the other ants can sense through their antennae. The scent trails can lead other ants to a food supply or warn of an intruder. Even dead ants have a scent that communicates to other worker ants to remove its body from the colony.

Ant colonies can exist for decades, even as the resident ants die off. A worker ant can live for a few years, while queen ants can live for 15 or more. As the ants die, though, they are replaced by new insects that will continue the work of previous generations, according to the Illinois Department of Public Health. 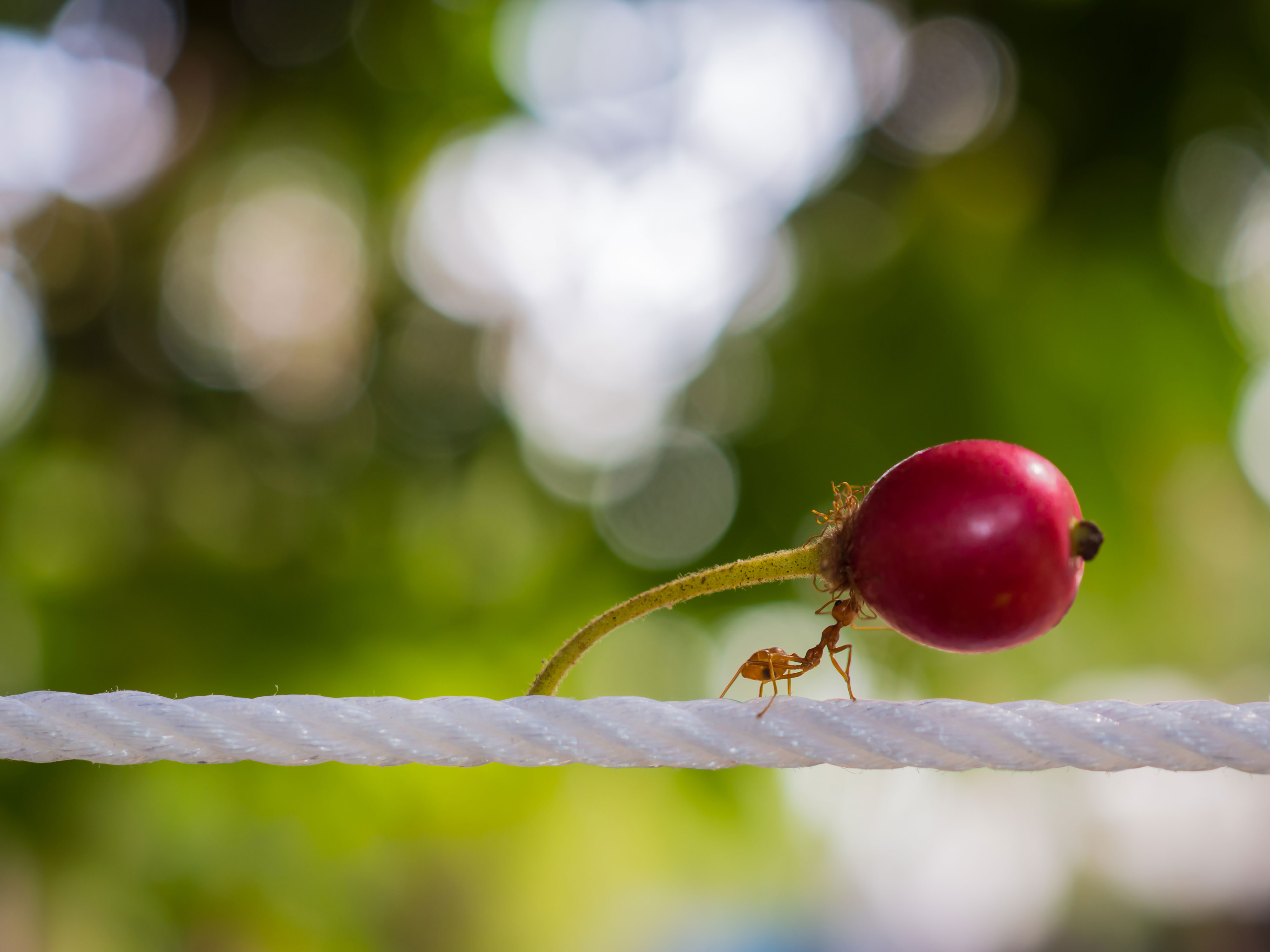 Ants eat and gather their food in many ways, depending on the species. Many ant species eat nectar, fungus, seeds and other insects, according to National Geographic. One common ant food is honeydew, but not the sweet, green melon you can buy at the grocery store. The honeydew ants eat is a liquid, sugary waste product secreted by aphids, states the University of Kentucky College of Agriculture, Food and Environment.

The ants we commonly find in our homes will eat human food, including fruit, honey and other sweet liquids, meats, dairy products and grease and oil, according to the Illinois Department of Public Health.

Some ants have very sophisticated means of catching and harvesting food, including hunting and farming. Leafcutter ants, for example, bring leaves to their nests that they use to grow a fungus that the ants eat, the San Diego Zoo reports. 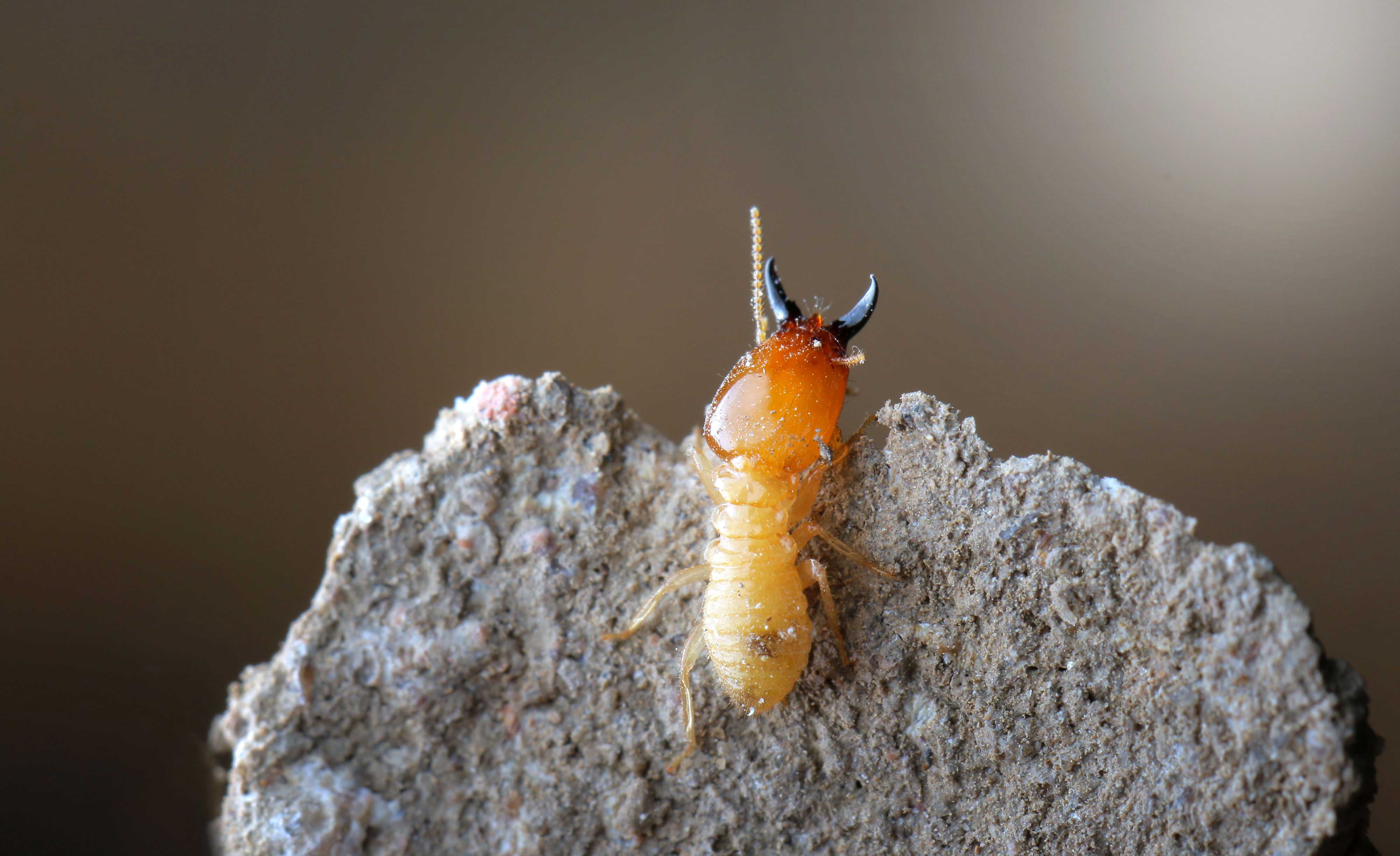 This is a termite, not an ant. (Photo via Shutterstock)

Ants are often confused with termites, and although the two may look similar they are not closely related, according to the Illinois Department of Public Health. Both are insects and have the three distinct body parts that all insects do: a head, a thorax and an abdomen.

You can tell ants apart from termites from a few distinct features. First, an ant has a thin waist between its abdomen and thorax, while a termite’s waist is more broad. Ants also have a bend in their antennae, like an elbow, while termite antennae are a chain of small, beady segments, according to the Illinois Department of Public Health. Both ants and termites also have two pairs of wings when they are in their winged form, but termite wings are about equal in size, while an ant’s forewings are longer than its hindwings.

Another key difference is that while termites eat wood, ants do not. Some ants, such as carpenter ants, nest in wood, but they don’t eat it, according to the Illinois Department of Public Health. These ants can still weaken wooden structures as they tunnel through it, but they do not consume the wood as termites do. 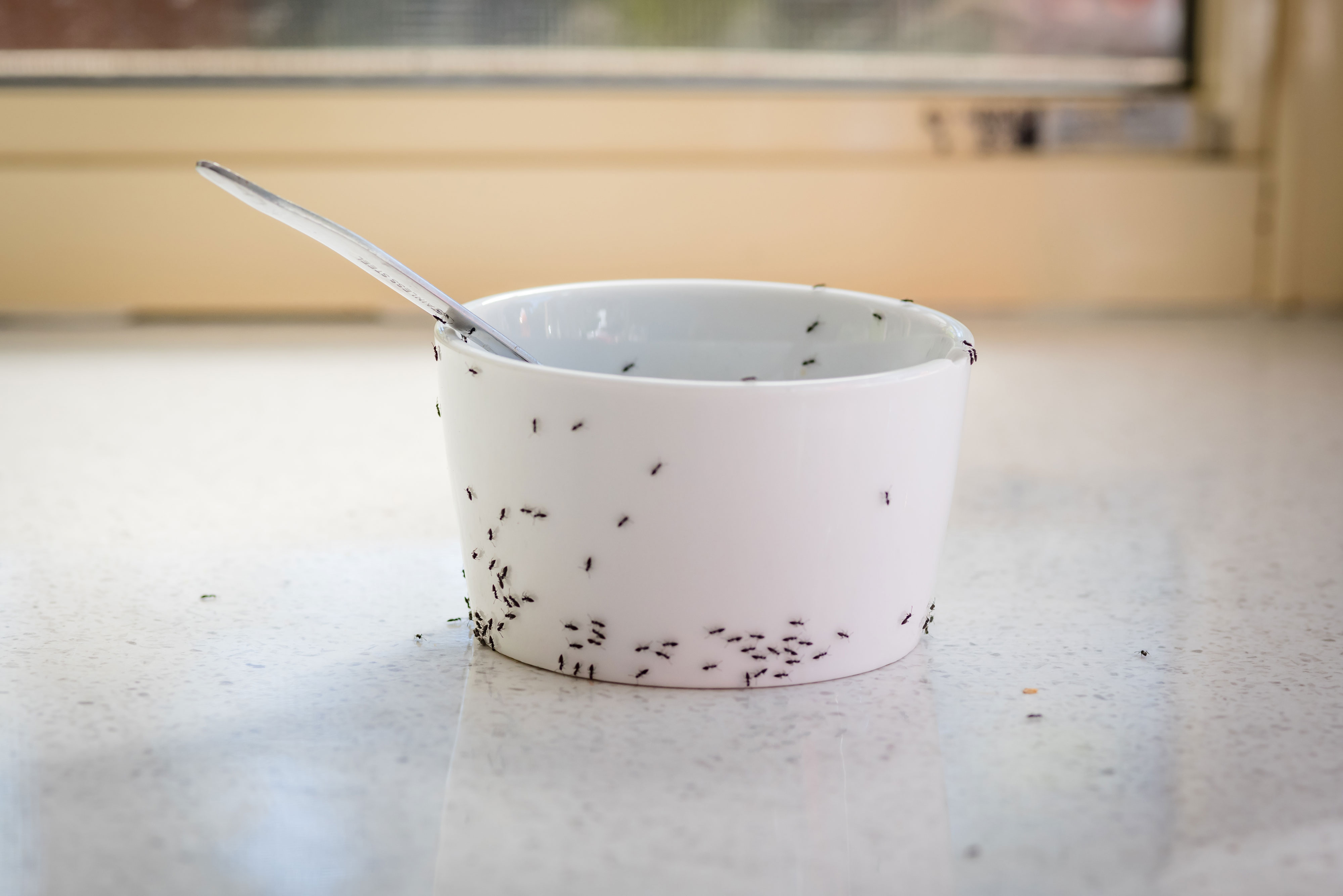 Most of us don’t given a second thought to ants when we see them outdoors, but once they make their way inside they become a nuisance we are very aware of.

In Illinois, most indoor ant infestations are caused by six species of the insect, reports the Illinois Department of Public Health. Here’s a closer look at some of the ants that commonly find their way into our homes.

Pavement ants: These dark brown or black ants are often seen indoors after heavy rains soak their underground colonies. The ants, which are about one-sixth of an inch long, got their name because they excavate to build their nests underground, pushing soil into mounds commonly seen along sidewalks, driveways and concrete slabs.

Odorous house ants: These ants look similar to pavement ants but, when crushed, odorous house ants release a scent that smells like rotten coconut, hence the name. Odorous house ants are about an eighth of an inch long, and they are commonly found indoors during wet, rainy periods and in the fall.

Small honey ants: These ants are similar in size and appearance to odorous house ants. They seem to better tolerate low temperatures than many other ants and may be the first and last ants seen during the year, although they aren’t seen as often during the high heat of summer.

Carpenter ants: These ants are the biggest ants found in Illinois, reaching up to three-quarters of an inch long. Several species of carpenter ants exist, and the color can vary from black to reddish-brown. Carpenter ants nest in wood, tunneling though wood from both indoor and outdoor sources. As they tunnel, they leave behind sawdust.

Large yellow ants: These yellowish-brown ants, which can be up to a quarter-inch long, are also known as citronella ants because they have a citrusy odor when crushed. Large yellow ants are often seen indoors as winter approaches, when the colonies move inside, and in the spring, when the winged form of the reproductive ants are produced.

Pharaoh ants: These yellowish- or reddish-brown ants are tiny, only about 1/12 of an inch long. Indoor colonies can be large, and pharaoh ants often infest large buildings. They pose health risks when they infest hospitals because they can carry infectious bacteria. 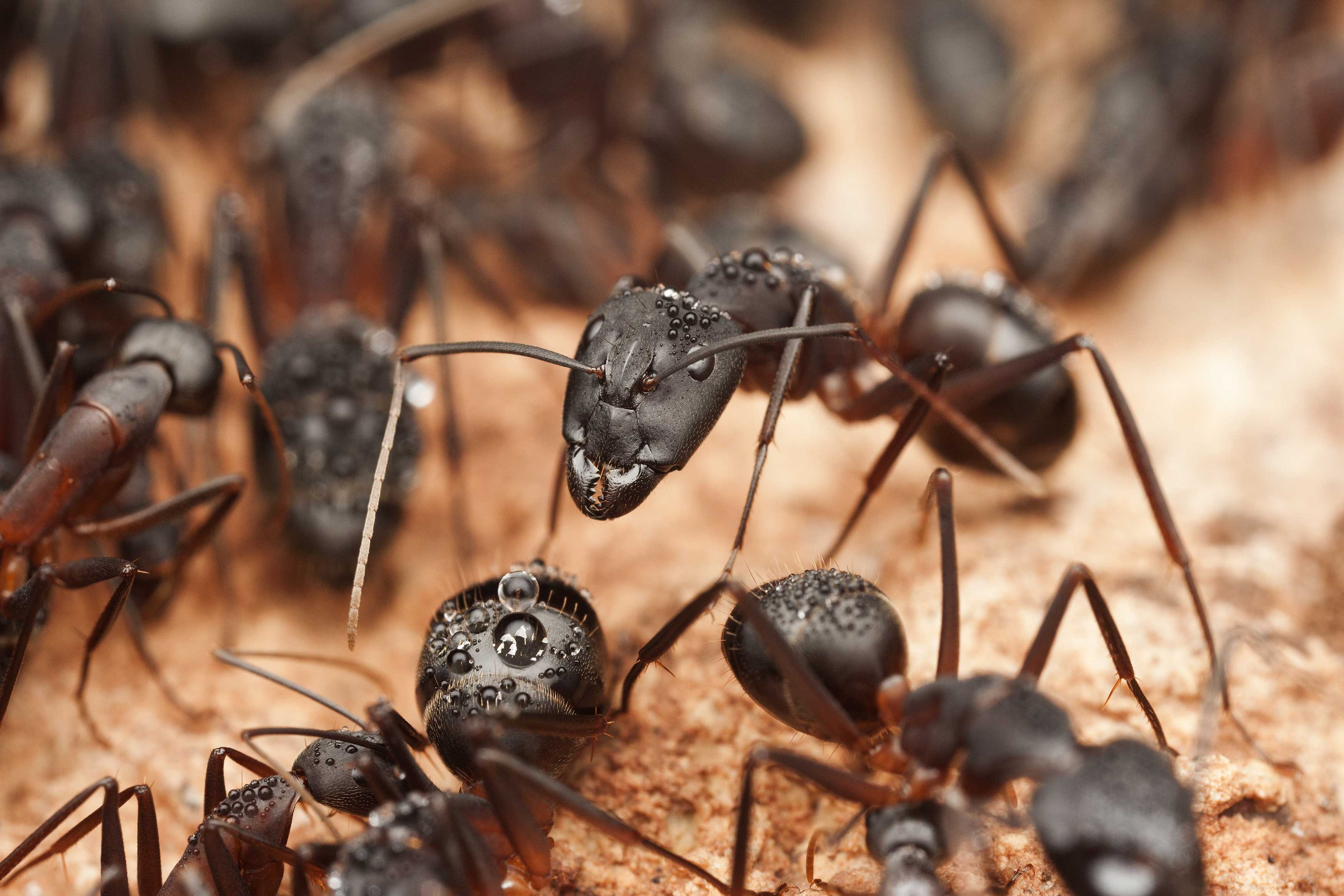 Most ants indoors are simply a nuisance, although some, like carpenter ants, can ruin and weaken wooden structures. Many people opt for a spray pesticide when they find ants in their home, but this is only a short-term solution, the University of Illinois Extension advises.

To control ants, you have to keep them out of your home. This means both limiting the places where they can enter, such as cracks or crevices in your foundation, doors and windows, as well as keeping your home clean of crumbs and open food sources the insects come in search of.

Ant baits can also be an effective tool at managing ants, but the baits typically only work on some species, and baits only work if no other food sources are available. And ant baits should never be used where pets or small children can access them, the University of Illinois Extension advises.

And remember to always carefully read and follow all directions when using a pesticide to control or treat an ant nest.