Animals of our recent past

Just a few hundred years ago, animals that populated Illinois were different than what we see today

Lions and tigers and bears, oh my? Maybe in some parts of the world, but not here in Illinois, where our mammalian wildlife skews a little more tame than the trifecta made famous by “The Wizard of Oz.”

When we think about the mammals that populate the land right here in Illinois, deer probably come to mind, and rabbits too. Think about it for a minute and you can probably add several more to the list: squirrels and chipmunks, raccoons, skunks, maybe opossums and moles.

A couple of hundred years ago, however, the animals that populated our lands included many that are quite a bit different than what we are used to today — and maybe even included lions and tigers and bears.

As land use in Illinois changed, so, too, did our flora and fauna. Prairies and forests gave way to agricultural fields, and with that change, some animals moved on to areas with more suitable habitat. Others were hunted or driven away. Here’s a closer look at some of the animals now gone from Illinois but a normal part of the habitat in the not-too-distant past. 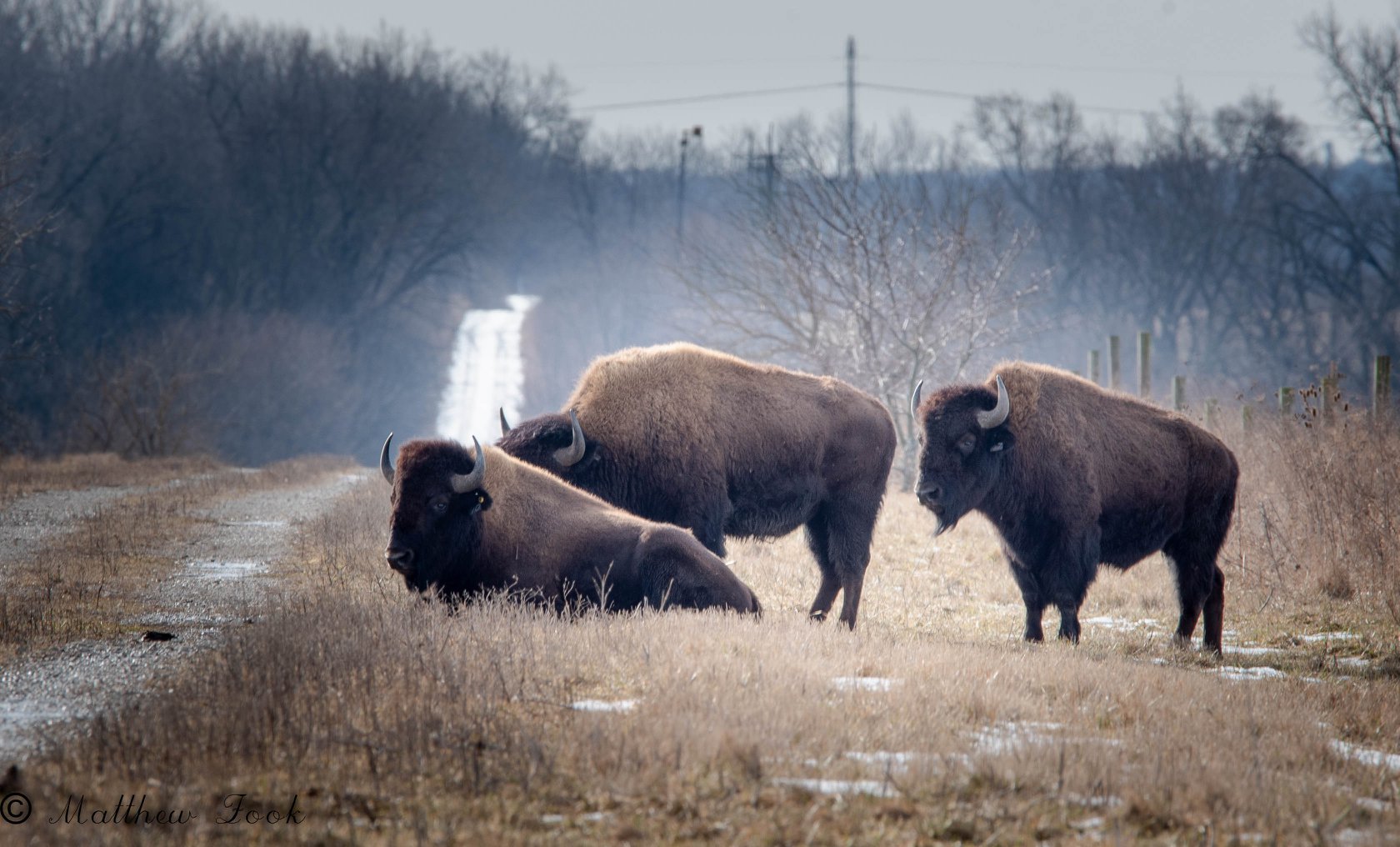 To be sure, we do have bison living in Illinois, but in managed herds that are part of conservation programs at places like Midewin National Tallgrass Prairie, Nachusa Grasslands and Fermilab. However, prior to 1800, an estimated 30 million to 100 million freely roamed the United States, including right here in Illinois, according to Smithsonian’s National Zoo & Conservation Biology Institute.

Bison populations across all of the United States were decimated, though, with millions of the animals slaughtered, many by the U.S. government as part of an effort to destroy the livelihood of Native tribes across the Great Plains. In Illinois, bison roamed the land from the late 17th century until the early 19th century, according to the Illinois State Museum. They disappeared from the state by 1820 as a result of intensive hunting.

Today, the range of the American bison is only about 1% of what it once was. The only place in the United States where bison have lived continuously since prehistoric times is Yellowstone National Park, where the population of these animals fluctuates between 2,300 and 5,500, according to the National Park Service.

Today, the bison population in the United States is estimated at between 400,000 and 500,000, but the vast majority of these are livestock. The bison living in places like Midewin and Nachusa Grasslands are part of about 30,000 bison living on public and private lands that are managed as part of conservation efforts. 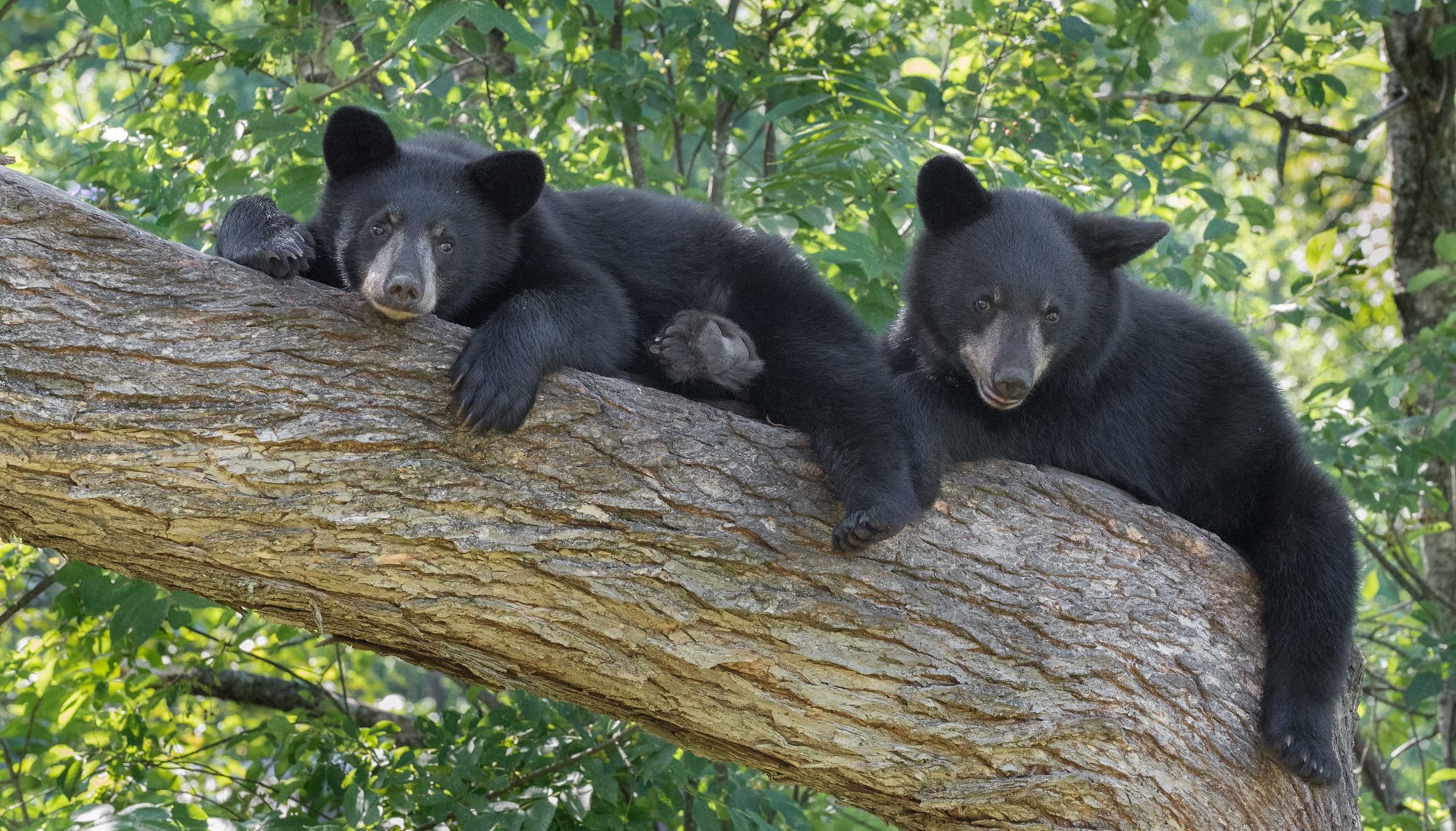 Here in Illinois, when we think about black bears, or any bears for that matter, we probably think of the zoo. Afterall, bears are not a part of the landscape here in our state. However, black bears used to be quite common here and elsewhere in the Midwest, although they were eliminated from Illinois by 1870, Wildlife Illinois reports.

Bears disappeared from areas like Illinois and Indiana because of habitat loss and unregulated hunting, although they do still live in some adjacent states, according to the Indiana Department of Natural Resources.

Black bears occasionally stray into Illinois from neighboring states like Wisconsin and Missouri, but when they do their time here is brief, as they are just passing through. Since 2008, black bear sightings have been confirmed in Illinois six times, with the most recent sighting earlier this year in the southern part of the state.

In Illinois, bears are protected by the Illinois Wildlife Code, and they cannot be harassed, hunted or killed unless there is an imminent threat to person or property. If you see a bear in Illinois, the Illinois Department of Natural Resources asks that you report it to the agency online. 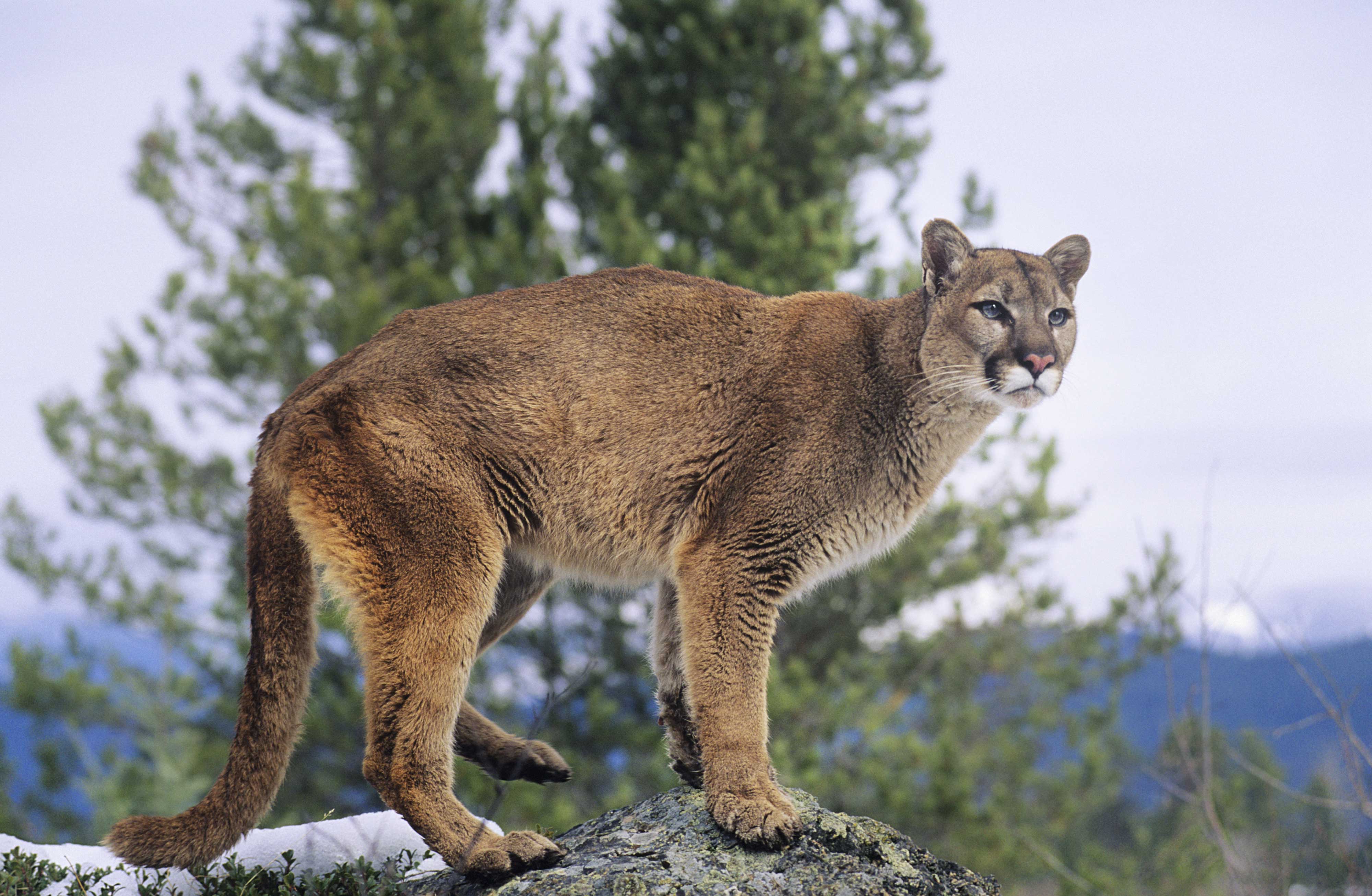 Illinois was once part of the cougar’s normal range, but they have been absent from the state since 1870, mainly because of hunting and habitat loss, Wildlife Illinois reports. In many places, cougars were hunted because of the perceived threat to livestock.

North American cougars, also called mountain lions and pumas, have the greatest range of any mammal living in the Americas, living as far north as Canada’s Yukon and as far south as the Strait of Magellan in Chile, according to the National Wildlife Federation. They can live in just about any habitat as long as they can find adequate shelter and prey.

In Illinois, cougars are not a normal part of the fauna, but they do make their way here from time to time. Since 2002, four cougars have been killed in Illinois, including once shot and killed in April 2008 in Chicago, Wildlife Illinois reports. In addition, video from trail cameras has led to a few other confirmed cougar sightings in the state.

Like bears, cougars are protected in our state by the Illinois Wildlife Code, and cannot be harassed, hunted or killed unless there is an imminent threat to person or property. If you see a cougar in Illinois, report the sighting online to the Illinois Department of Natural Resources.

When we think of elk, we think of the Rocky Mountains, and that is where these animals are now concentrated in the United States. However, they once lived across much of the country before being hunted and driven west to less populated areas, National Geographic reports.

Elk disappeared from Illinois by the early 1800s, and they have remained absent since that time, Wildlife Illinois reports. Elk sightings in the state are mainly from escaped elk owned by private landowners. No wild populations of the animal have existed here since the 1800s. 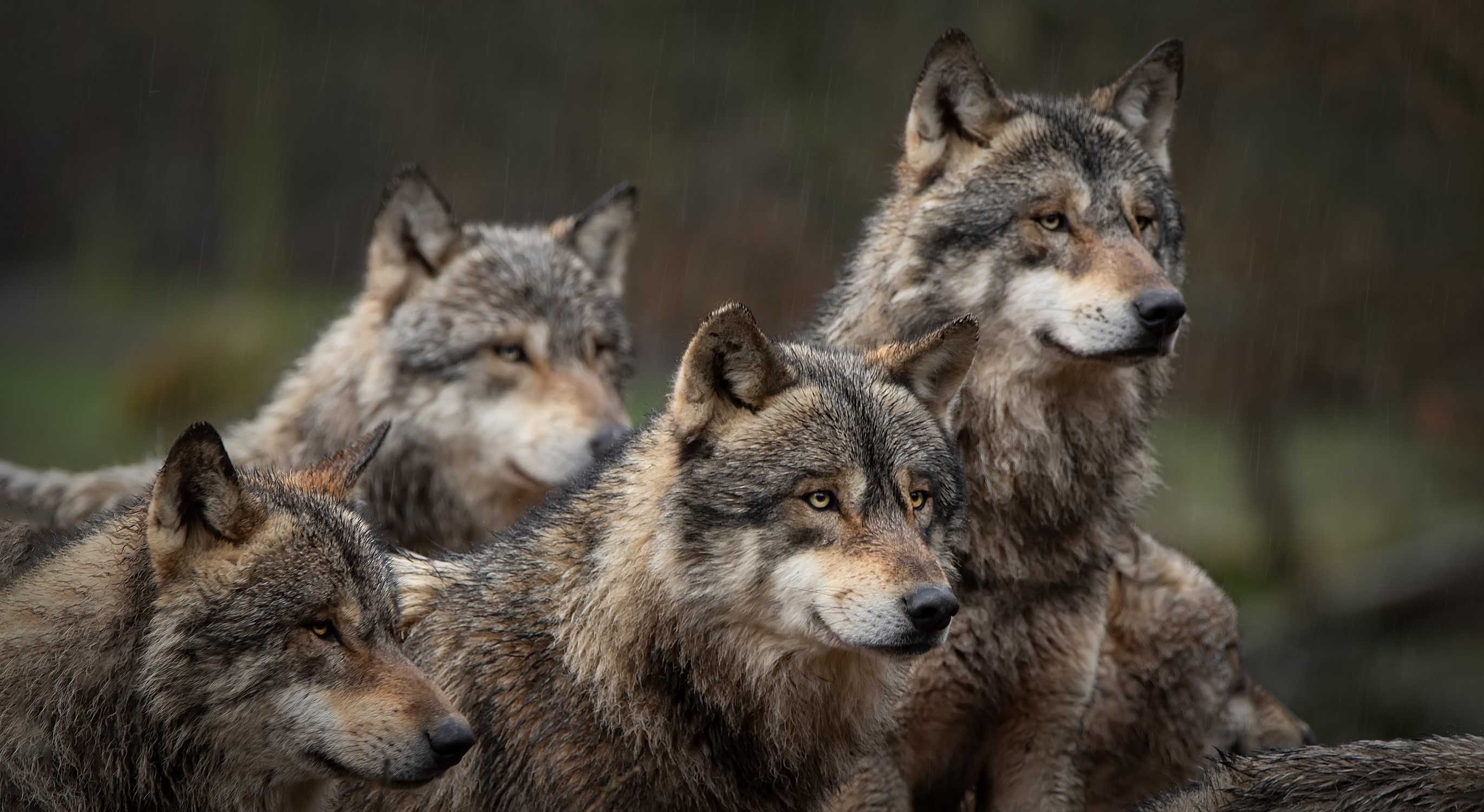 Gray wolves once lived across Illinois and almost all of the United States, save for the Southeast, as well as portions of Mexico and Canada, but today their range is limited to just a few areas in the United States, including parts of the Rocky Mountains, Minnesota, northern Wisconsin, northern Michigan and northeast Oregon, according to the National Wildlife Federation.

Wolf populations were decimated in the United States when their prey — bison, deer, elk and moose — were largely eliminated by settlers as they moved west across the United States, according to the U.S. Fish and Wildlife Service. With prey scarce, wolves began to hunt sheep and other livestock. In turn, ranchers and government agencies offered bounty programs for the wolves, paying a head fee of $20 to $50 per wolf.

Coyotes are often mistaken for wolves, particularly in winter when coyotes look bigger because of their thicker fur coats. The two animals can appear similar at first glance, but wolves are quite a bit larger than coyotes, standing about 2½ feet tall and 5 feet to 6 feet long, compared to 1½ feet tall and about 4 feet long for coyotes, according to Wildlife Illinois. Gray wolves usually weigh between 80 pounds and 120 pounds, while coyotes weigh only 20 pounds to 50 pounds. Coyotes are typically light brown or gray in color, while wolves can also be light brown or gray but may also have a darker coat. If you get a good look at an animal’s tail, that can be a telling difference too. While coyotes walk with their tails pointed downward, wolves carry their tails straight back from their bodies while walking.

While wolves no longer are considered part of Illinois’ wildlife, they are occasionally spotted in the state. Since 2002, the state has confirmed several wolves in Illinois, usually after they are hit by a car or shot by a coyote hunter, Wildlife Illinois reports.

In addition to their protections as a state endangered species, wolves in the state are also protected by the Illinois Wildlife Code, which prohibits them from being harrassed, hunted or killed unless there is an imminent threat to person or property. If you spot a wolf in Illinois, report it online to the Illinois Department of Natural Resources.

When they lived in Illinois, porcupines inhabited deciduous forests, and they still do live in these types of forests elsewhere in their range. They also can live in open tundra and desert climates. In forested areas, porcupines often mostly live in trees. In other areas where trees are more sparse, they spend more of their time on the ground, Animal Diversity Web reports.

Porcupines are most well-known for their quills, which serve as an effective defense mechanism against predators. However, they cannot shoot or throw their quills at predators, as is commonly thought, according to the Smithsonian Zoo. Instead, because the quills are only loosely attached, they easily separate when they come into contact with predators.