What's the difference?: Beaver vs. muskrat 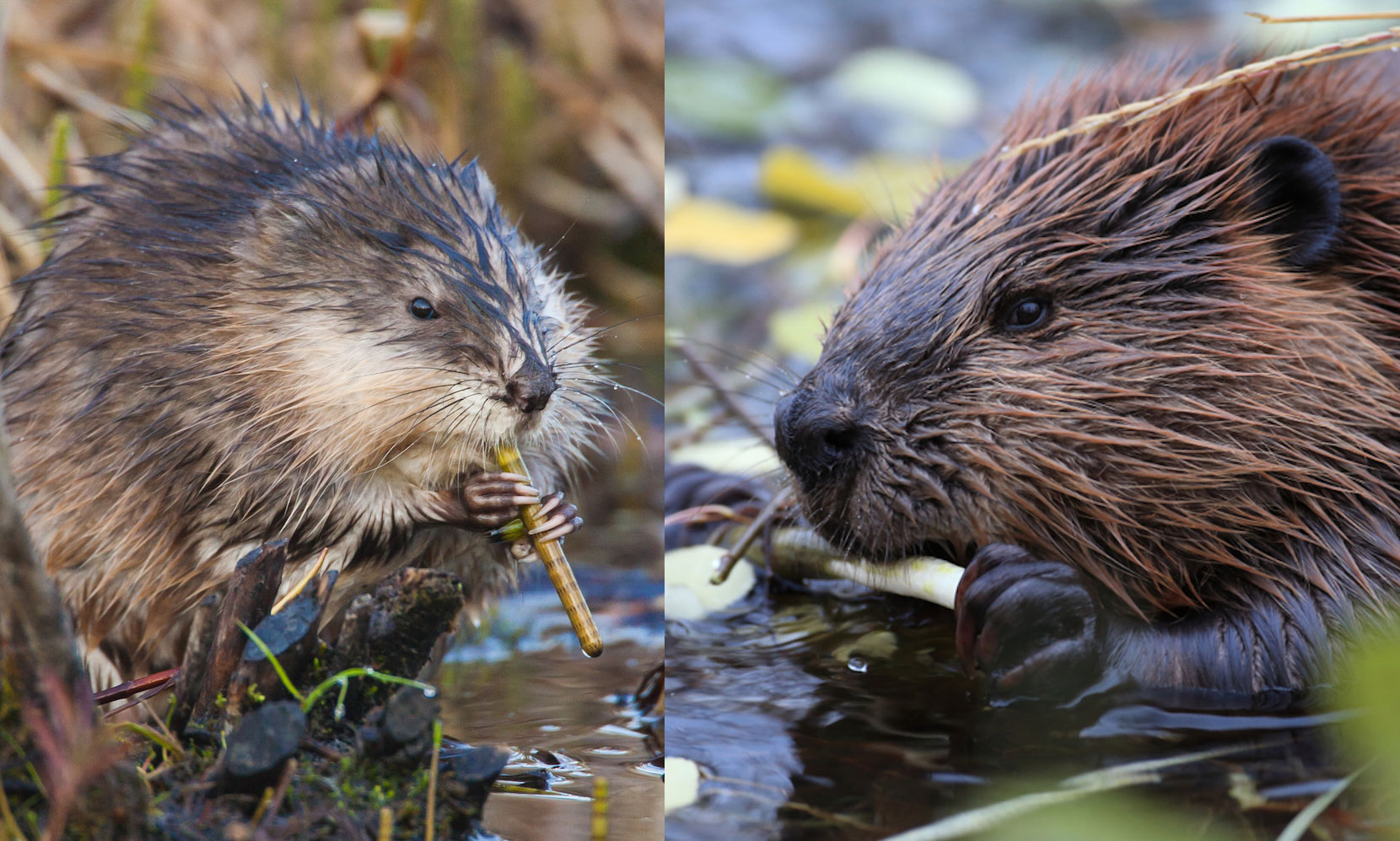 Muskrat (left) and a beaver are often confused for one another. (Photos via Shutterstock)

Will County is home to several semiaquatic mammals, so when you see a furry critter splish splashing around in the water it can be hard to know what animal you are seeing unless you get a good look.

Beavers, muskrats, otters and mink are all semiaquatic, and all are brown, making identifying them correctly even more challenging. Otters and mink can be easier to tell apart because both have long bodies. Beavers and muskrats, though, can be more difficult to tell from one another, unless on land, where their features are more easily distinguishable.

Beavers and muskrats are both rodents, the largest order of mammals. However, they are not very closely related, and they belong to different families. Beavers belong to the Castoridae family, which includes just the American beaver, which is the beaver we know in the United States, as well as the Eurasian beaver, which lives in Europe and Asia. Muskrats are a part of the Cricetidae family, a large family of rodents that also includes hamsters, voles and many species of rats and mice.

Although they are not closely related, beavers and muskrats have evolved to have many shared behaviors and traits, a concept known as convergent evolution, according to Mass Audubon. Another example of convergent evolution is sharks and dolphins. Sharks are fish and dolphins are mammals, but they both have flippers, pectoral and dorsal fins and long, streamlined bodies that aid them in swimming quickly, TreeHugger reports.

When it comes to beavers and muskrats, one main difference between them is their size. Beavers are the largest rodent in North America, and they are considerably bigger than muskrats. A beaver can weigh as much as 100 pounds, although they typically are between 35 pounds and 68 pounds, according to the U.S. Fish and Wildlife Service. They are between 39 inches and 47 inches long. In contrast, muskrats are much more lightweight, weighing only between 2 pounds and 5 pounds. They are also not as long as a beaver, measuring between 16 inches and 25 inches in length.

Both animals do have long tails, with beavers' measuring 10 inches to 13 inches and muskrats measuring 7 inches to 12 inches, the fish and wildlife service reports. However, beaver tails are much wider — usually 3.5 inches to 8 inches wide — while muskrat tails are thin and rat-like.

While size and tail are two key differences between muskrats and beavers, neither may be obvious when these animals are in the water, as they often are. If you catch a glimpse of an animal swimming, you may be able to tell whether it's a muskrat or a beaver by how it carries itself in the water. Muskrats typically swim with their heads, backs and tails exposed at the water's surface, while beavers normally keep only their heads above water, Mass Audubon reports. And because beavers use their tails as a rudder while swimming, you won't be able to see it at the water's surface, as you can with a muskrat's tail.

Another similarity between these two animals is that both live in lodges, and if you happen upon one you may be able to tell which creature lives inside because of some tell-tale signs. First, a beaver's lodge will be much larger than a muskrat's. The material they use to build differs as well, according to Mass Audubon. While beavers typically build lodges from wooden material like sticks and logs, muskrats will use other kinds of vegetation, like cattails. In the absence of a lodge, both beavers and muskrats will also dig a burrow into the bank of a river or stream.

And while both build lodges to live in, only beavers make dams. Their dams, built from logs and mud, can create new aquatic habitats for both them and a variety of other animals, according to the National Park Service. Beavers will build their lodges either in a pond created by their dam or in existing lakes, ponds or waterways.

In some parts of the United States, telling the difference between these animals is made even more difficult because of the presence of a third animal, the nutria, that looks similar to beavers and muskrats and also shares many of their traits and behaviors.

Nutria are native to South America and were first brought to the United States with the intent of creating a fur farming industry, according to the U.S. Fish and Wildlife Service. Some of the nutria escaped and others were released when a market never materialized for their fur, and now these animals, called coypu in other parts of the world, live in many coastal parts of the United States, including the Pacific Northwest and Gulf Coast.

Nutria are also brown rodents, and they are also semiaquatic. Size-wise, they are between the size of a muskrat and a beaver, weighing between 10 pounds and 20 pounds. They are about 30 inches long, with a 10-inch rat-like tail covered with sparse hairs, the fish and wildlife service reports.