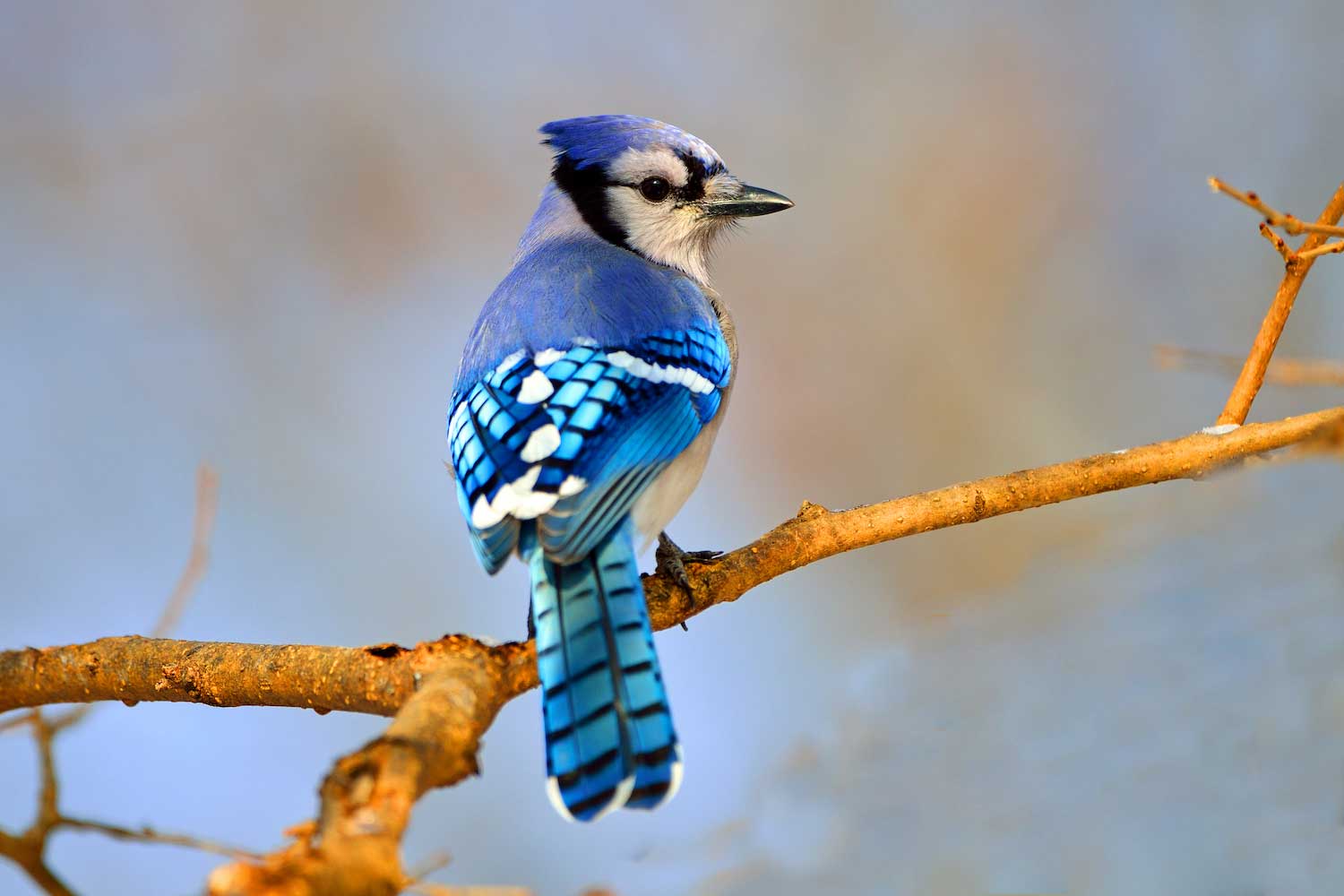 With their bright blue feathers and their loud, piercing call, blue jays are among our most easily identifiable birds. If you keep bird feeders in your yard, you may have noticed that blue jays are kind of like the bully on the playground. They can be loud and aggressive, threatening smaller birds. It's for this reason that blue jays are not a favorite among many avid birders.

Blue jays live everywhere in the United States east of the Rocky Mountains and in parts of southern Canada, according to the Cornell Lab of Ornithology. Their migration patterns are not yet well understood by researchers. They are migratory, but not all birds migrate. They are present in most of their range throughout the year, although some blue jays do migrate south for winter.

Blue jays eat insects, nuts, seeds and grains. If you'd like to attract them to your yard, try putting out peanuts, suet or sunflower seed, Cornell Lab advises. They prefer tray and hopper-style bird feeders to hanging feeders.

Read on to learn even more about these birds.

This may come as a surprise, but blue jays aren't actually blue. The pigment in their feather is melanin, which is brown. We see them as blue because of a scientific principle called light scattering, according to the Cornell Lab.

Light scattering is similar to how a prism works. Blue jays' wings contain small pockets made of air and keratin. When light hits these pockets, all colors of the wavelength are absorbed except blue. Instead, the blue wavelength is refracted, making it visible to us, according to the Cornell Lab.

The same principle that makes us see blue jays as blue applies to other blue songbirds as well. That means bluebirds and indigo buntings aren't blue either; we just see them as such. It's just these blue-hued birds playing tricks on you, though. You can rest assured that the feathers of a cardinal are red and goldfinches are, indeed, golden. Their colors come from pigments called carotenoids.

They are quite smart

Blue jays belong to the Corvidae family of birds, which are considered to be among the most intelligent birds in the world, according to National Geographic. The Corvidae, or corvid, family includes ravens, crows, jays and magpies. Of these, ravens and crows are particularly noted for their intelligence. Blue jays, though, are pretty smart as well.

In particular, blue jays are known as highly sociable birds that form tight social bonds, Cornell Lab reports. It is thought that blue jays may be able to recognize other birds of their species from the variable black markings on their faces, heads and throats.

They are able to communicate with other blue jays using both body language and vocalizations. Their crest, in particular, is a useful signal to other birds. When it is lowered, it's a sign the bird's aggression level is low. The higher up the crest is, the higher the bird's aggression level. When blue jays squawk, their crests are always raised, indicating high aggression. Beyond squawking, blue jays rely on many other vocalizations to communicate with other birds.

They are also good mimics, particularly of hawk species like the red-tailed hawk and red-shouldered hawk. Scientists aren't entirely sure why they do this, but they believe it may be an attempt to warn other nearby jays of hawks in the area or to try to fool other bird species into thinking hawks are in the vicinity, Nature Canada reports. Captive blue jays are even better mimics and have learned to imitate a cat's meow and even human speech.

They are known to collect paint chips

This is a weird one, but it's well documented that blue jays sometimes chip away at light-colored paint and then keep a stockpile of the paint chips, Nature Canada reports. Why? They use the paint chips as a source of calcium in the spring, when the mineral is essential for egg-laying. Paint typically includes limestone, which is a good source of calcium.

This unusual behavior seems to be most common in the northeastern United States. Researchers believe this is likely because acid rain is most prevalent in this area of the country, and the acid depletes the calcium normally found in soil, according to the Cornell Lab's Project FeederWatch.

If blue jays are making a mess of the paint on your house, you can try providing another source of calcium. Project FeederWatch recommends leaving out a supply of crushed eggshells. Make sure to sterilize them first by either boiling them or baking them in a 250 degree F oven for 20 minutes.

Squirrels aren't the only animals with acorns at the top of their favorite foods list. Blue jays love acorns, too, so if have oak trees in or near your yard, blue jays are probably a common sight, Cornell Lab reports. In fact, if you want blue jays around, planting oak trees is a good way to do it.

Blue jays' affinity for acorns aided the expansion of oak forests across the continent at the end of the last ice age, according to the Cornell Lab. Their reforestation efforts work similarly to squirrels'. Like squirrels, blue jays stash away acorns for later, but they don't return for all the buried nuts. These left-behind acorns then sometimes grow into oak trees.

When blue jays stash away acorns for later, they tend to store only the healthiest of nuts, according to Woods & Waters Land Trust. They typically fly far from where they found the acorn to stash it away in a forest opening. When those nuts go unclaimed and grow into oak trees, it helps expand forests, fill in forest openings or connect forested areas to one another.

They don't get much love

That's not to say blue jays get no respect. The Major League Baseball team in Toronto is named for the well-known blue-hued birds. Toronto was awarded an expansion MLB team in 1976, and the team has been called the Blue Jays since its inception. To name the team, the organization held a public contest that garnered more than 30,000 submissions of more than 4,000 name suggestions, according to Major League Baseball. One of the most common names submitted through the contest was the Blues, but because that was similar to the name for the mascot of the University of Toronto, a panel of judges selected the name the Blue Jays instead.

Our neighbors to the north have shown other appreciation for the blue jay as well. The Canadian province of Prince Edward Island has named the blue jay its provincial bird. Here in the United States, a few colleges have adopted the blue jay as their mascot, including Creighton University, Elizabethtown College and Johns Hopkins University.