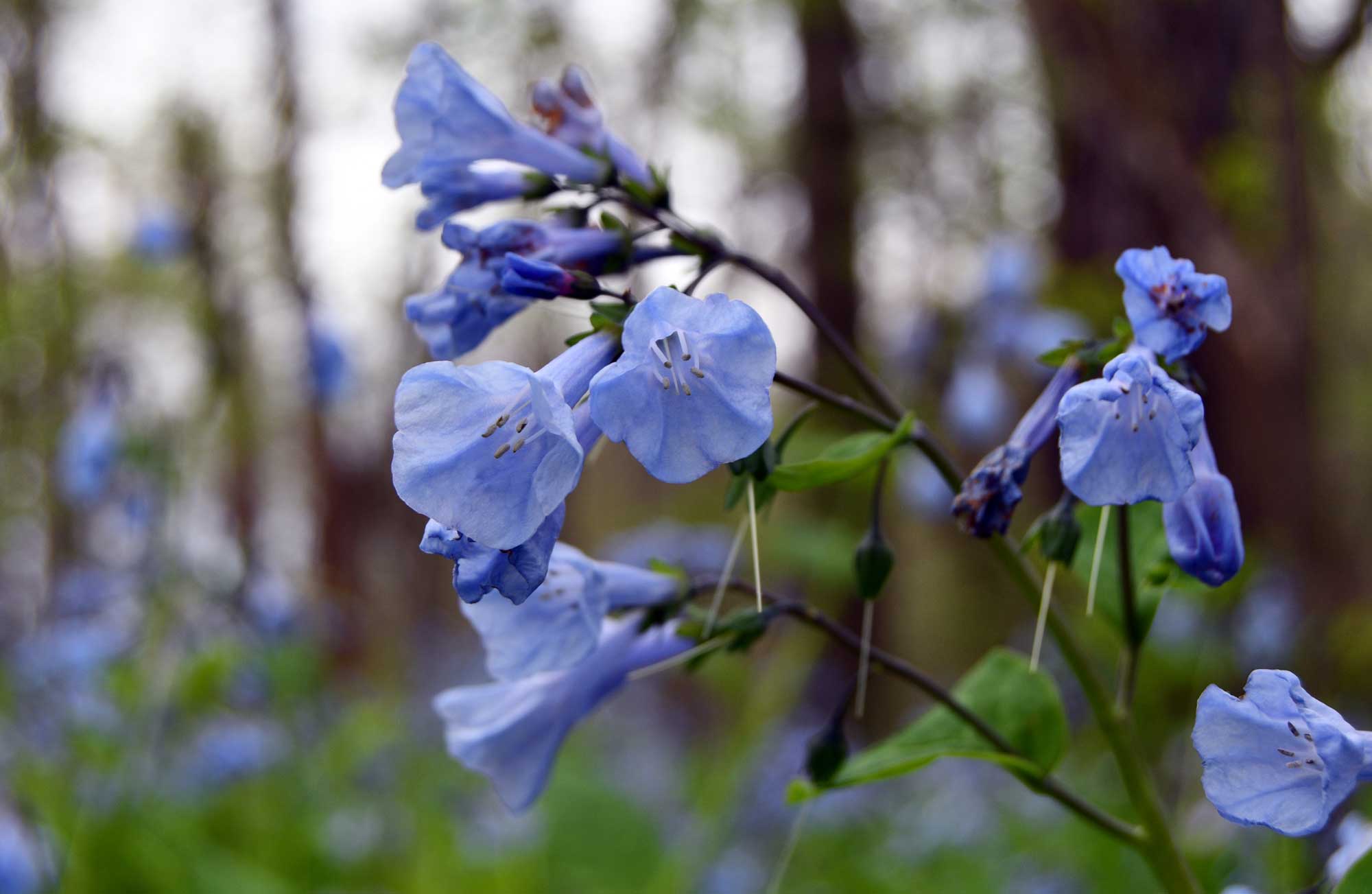 You don't have to have much of an imagination to understand how bluebells got their name. Both in color and shape, the flowers and their common name are a perfect match.

The blooming of the blue, bell-shaped flowers is much anticipated each spring. They aren't the first to bloom — several other woodland wildflowers bloom before bluebells — but they are among the most treasured in Will County and beyond.

Within the preserves, Messengers Woods Nature Preserve is the go-to spot to see the bluebells in bloom, but they also pop up each spring at McKinley Woods - Frederick's Grove, Hammel Woods and Raccoon Grove Nature Preserve, along with some other preserves with wooded and forested habitats.

Late April or early May is typically when the wildflowers begin revealing their beloved blossoms, although the timeline can vary from year to year. Before you head out to see them in person, here's some things you might not know about these beloved woodland wildflowers.

Bluebells are well-known and celebrated for their blue hue, but not all bluebells are actually blue and none of them start that way. Bluebell blooms start out as more of a pink or purplish-pink color before changing to the blue shade they are so famous for, and then returning to a more pinkish color after pollination. Not all bluebells turn blue, however. Some bluebell plants actually produce pink or even white flowers.

Being blue is part of what makes them so special, though. Blue is a rare color in nature, including among wildflowers. In fact, only about 10 percent of the more than 280,000 flowering plants worldwide produce blue blooms, according to the Lewis Ginter Botanical Garden.

The changing color of the flowers is fairly common among plants in the borage family. Lungwort and forget-me-nots, both related to bluebells, as well as larkspur and some other delphiniums, also produce blooms that change colors. The changing color is thought to signal to insects that the flowers are past pollination, according to the University of Vermont Department of Plant and Soil Science.

You have to act fast to see them

Bluebells are an ephemeral, which means their blooms don't last long. They aren't quite blink-or-you'll-miss-them quick, but these aren't flowers that will linger into the summer. Once they bloom, the clock is ticking on your chance to see them.

Locally, the blooms typically begin to emerge in April and reach their full blue glory by late April or early May. The peak stage, when the areas where they carpet the forest floor look like a sea of blue, will last only about three weeks, according to University of Wisconsin Horticulture Division of Extension.

While in bloom, bluebells have plenty of visitors, and not just the human variety. Bumble bees, long-tongues bees, butterflies, skippers, hummingbird moths and ruby-throated hummingbirds will visit the flowers for nectar and pollen, according to the Wisconsin Horticulture Division.

You can grow them at home

If bluebells' appearance in natural habitats is too fleeting for you to get your fix every year, you may be able to grow them in your own yard, provided you have a spot with the right growing conditions.

Like many other woodland wildflowers, these plants grow best in shady or partially shady spots, and they do best in moist soil, according to the Lady Bird Johnson Wildflower Center. Individual plants should be spaced 1 foot to 2 feet apart. If planting bluebells from seed, sow the seed about six weeks before the expected last frost to allow for cold moist stratification.

Bluebells will reach heights of 1 foot to 2 feet tall. The plants are short lived. After the blooms fade, the foliage will die back by about mid-summer, possibly leaving bare-looking spots in your landscape.

If you are buying bluebells to plant in your yard, make sure they were propogated in a nursery and not collected from the wild, the Virginia Native Plant Society advises. A reputable native plant nursery will be able to tell you the source of the plant.

They go by many names

Like many things in nature, Virginia bluebells go by several names. The most common and widely known moniker is bluebells, but they're also sometimes called gentleman's breeches and old ladies bonnets, both of which reference their similarity to these apparel items, according to the Lewis Ginter Botanical Garden.

They've also been called eastern bluebells, Virginia cowslip and lungwort oysterleaf, the Wisconsin Horticulture Division reports. The name lungwort oysterleaf arose because bluebells were at one time classified as lungwort because of their similarities in appearance. The term oysterleaf refers to the taste of the plant's cooked leaves which some believe has a flavor similar to oysters, according to St. Olaf College.

They're beloved far and wide

Bluebells get plenty of glory from wildflower admirers locally, but the admiration knows no boundaries, with bluebell season celebrated in many places where they grow. Virginia stakes a special claim on the wildflowers, likely because the state name is right there in the plant's common name and scientific name, which is Mertensia virginica. Virginia gets top billing because it is where the plant was first documented.

The love of bluebells is not just recent. Thomas Jefferson documented the flower in his garden book, describing them as "a bluish colored funnel-formed flower in lowgrounds in bloom" in one of his first entries in the journal, according to the Lewis Ginter Botanical Garden.

In the United States, their popularity is rivaled by another beloved blue wildflower— bluebonnets, which are a springtime attraction in Texas and some surrounding states. Across the pond, in England, yet another wildflower called bluebells is also celebrated each spring. English bluebells are also an appropriately named bright blue, bell-shaped flower that pops up in wooded areas each spring, according to the Woodland Trust.