In search of ‘Sallys’

These secretive little creatures are a rare find for nature lovers

Try to find a salamander in its natural habitat, and you might be in for a challenge. These elusive little amphibians seldom venture out into the open air, spending most of their adult lives tucked away in underground burrows or undetected under leaves and logs scattered throughout the forest floor. They are also nocturnal by nature, making it even more difficult to see one during an afternoon hike in the preserves.

“Salamanders in general are special because they are hidden most of the time,” explained Suzy Lyttle, interpretive naturalist for the Forest Preserve’s Plum Creek Nature Center at Goodenow Grove Nature Preserve. “The only time we see salamanders in full force is in the spring when they are migrating from their underground homes to the wetland to breed and lay eggs.”

When Forest Preserve staff have been fortunate enough to catch a glimpse, the most common species found belong to the mole salamander family. Mole salamanders get their name because of their preference for underground living, and all members of this family seek out fishless bodies of water to lay their eggs. These salamanders have an aquatic larval stage similar to frogs starting out as tadpoles, so laying their eggs in fishless waters gives the young a better chance for survival. 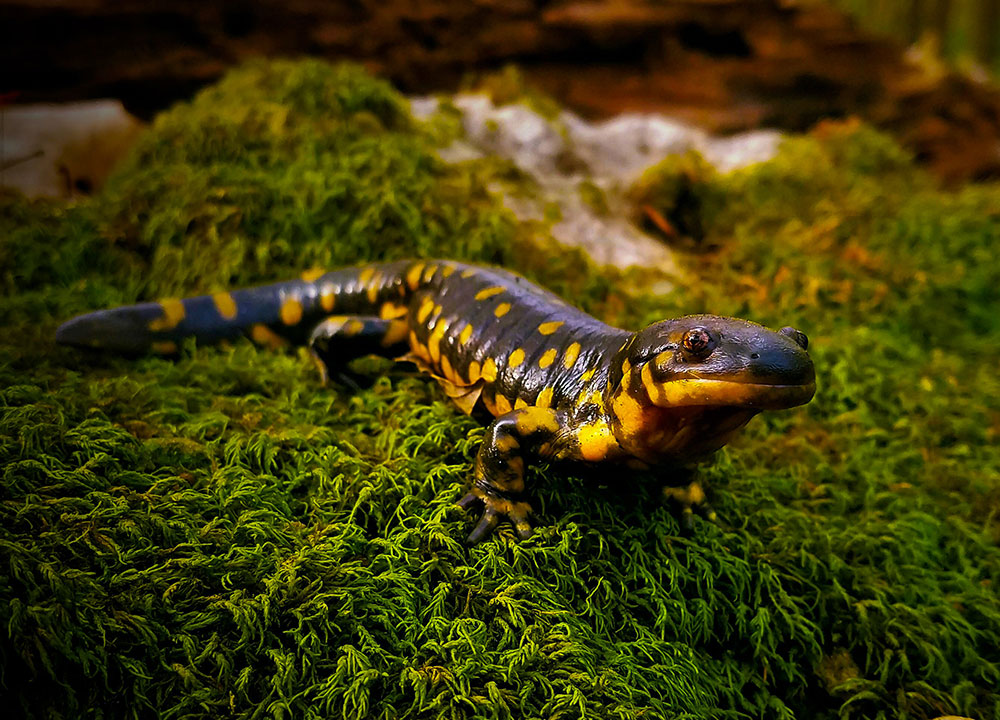 The eastern tiger salamander is typically the largest of the three, ranging from 7 to 13 inches in length and having a black body with yellow- to olive-colored spots or blotches. 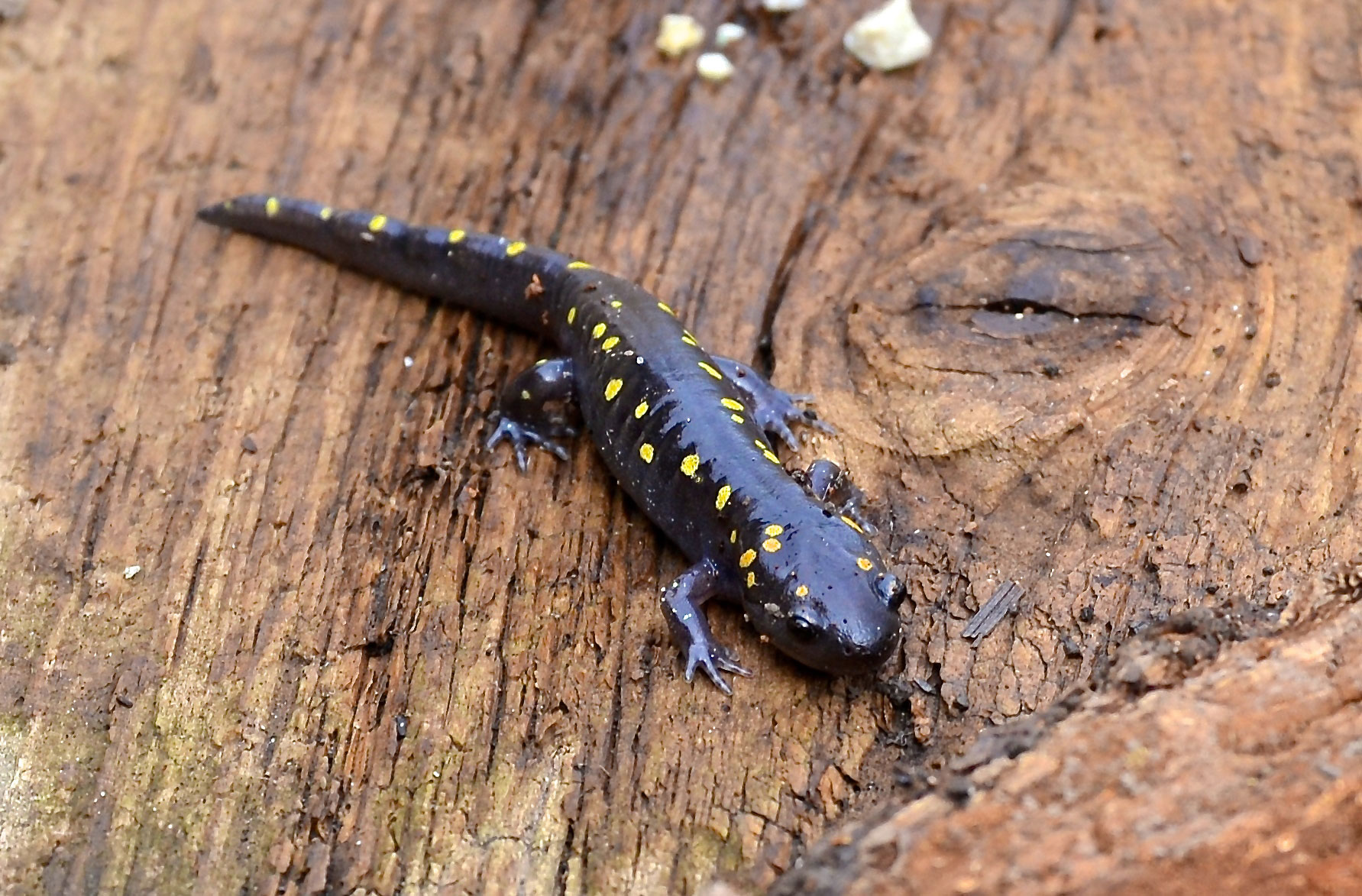 While spotted salamanders also have black bodies, they only grow between 6 and 9 inches long and have two irregular rows of yellow spots on their backs and sometimes orange spots on their heads. 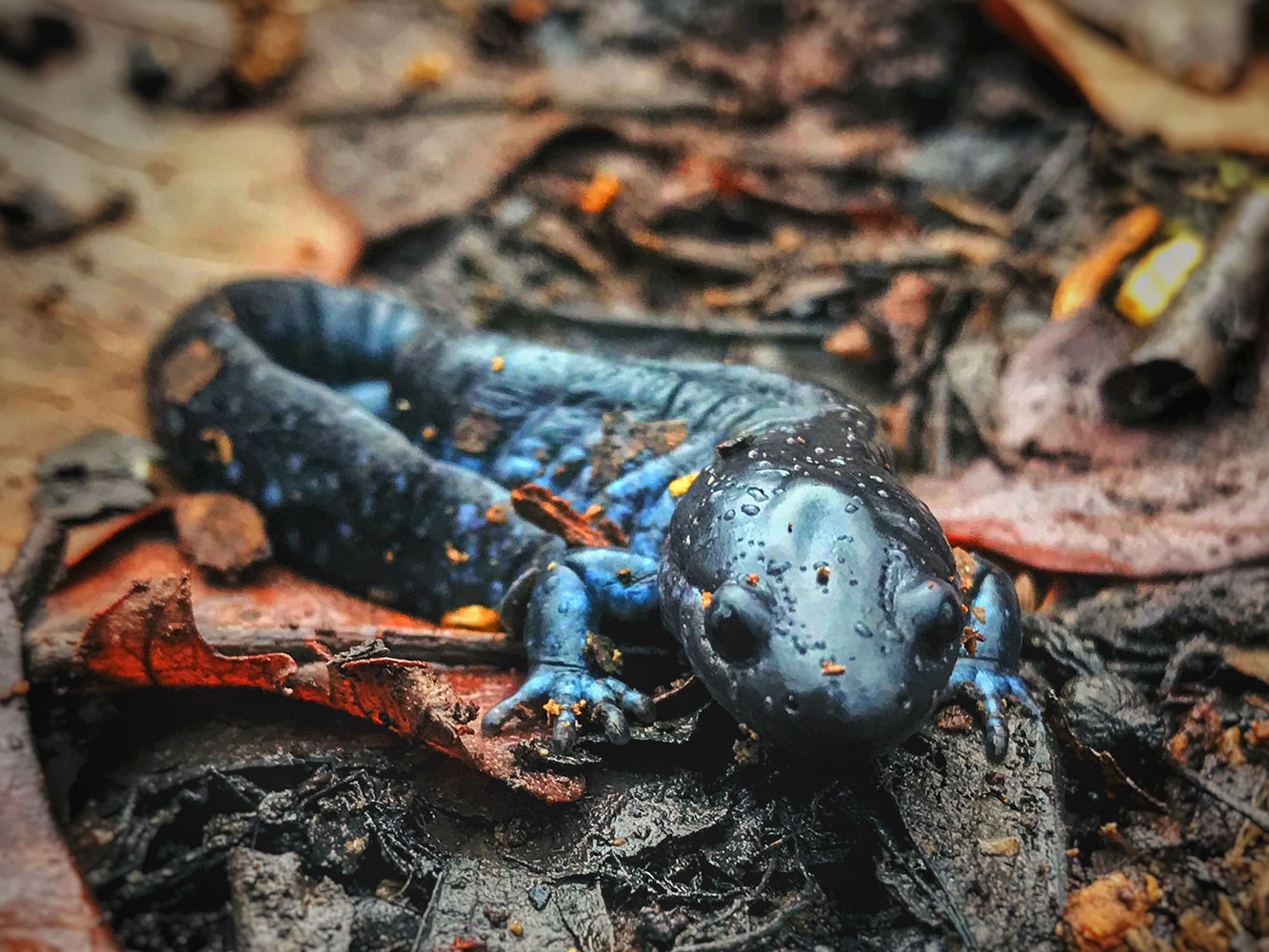 “Blue-spotted are the number one type found at Goodenow Grove,” Lyttle said.“I think these are extra special because in Illinois, they can only be found in the northeast Chicagoland area.”

The blue-spotted salamander has been named a priority species by the nonprofit conservation organization Chicago Wilderness. Priority species are animals that are designated as especially important for the ecosystem.

“If an area has salamanders, that means it also has a healthy wetland,” Lyttle said. “Salamanders are very sensitive to the environment and will not survive if the habitat is polluted.”

While Illinois has 20 different types of salamanders representing six different families, there are actually 400 species of salamanders worldwide and 70 percent of them can be found in Central and North America. Lyttle explained that this vast number of salamander types offers an assortment of cool patterns and colors.

For example, there’s the marbled salamander which has a white to silver cross pattern throughout its body, and the cave salamander (also known as the spotted-tail salamander) which is bright orange with small black spots.

Still others, like the blue-spotted salamander, have names that offer an even clearer picture as to what they might look like. For instance, the red-backed salamander has a red stripe down its back, and the zigzag salamander wears a zigzag pattern.

“You can tell herpetologists were pretty descriptive when it came to naming the species,” she said.

Even though the spotted, blue-spotted and the eastern tiger are the most common species found in Will County forest preserves, other salamander sightings have been recorded throughout the years.

According to District wildlife biologist Glen Buckner, these include eastern newts seen at Thorn Creek Woods Nature Preserve in 2000 and Braidwood Dunes and Savanna Nature Preserve in 2017, and small mouth salamanders found at McKinley Woods in 2014. There was even a sighting of a southern two-lined salamander that dates back to 1932.

“We actually have salamanders in many of our preserves, but not in large numbers at most locations,” Buckner said. They are, however, reported to be the most prevalent at five forest preserve sites: Goodenow Grove, Plum Valley Ravines, Messenger Woods Nature Preserve, Thorn Creek Woods, Braidwood Dunes and McKinley Woods. 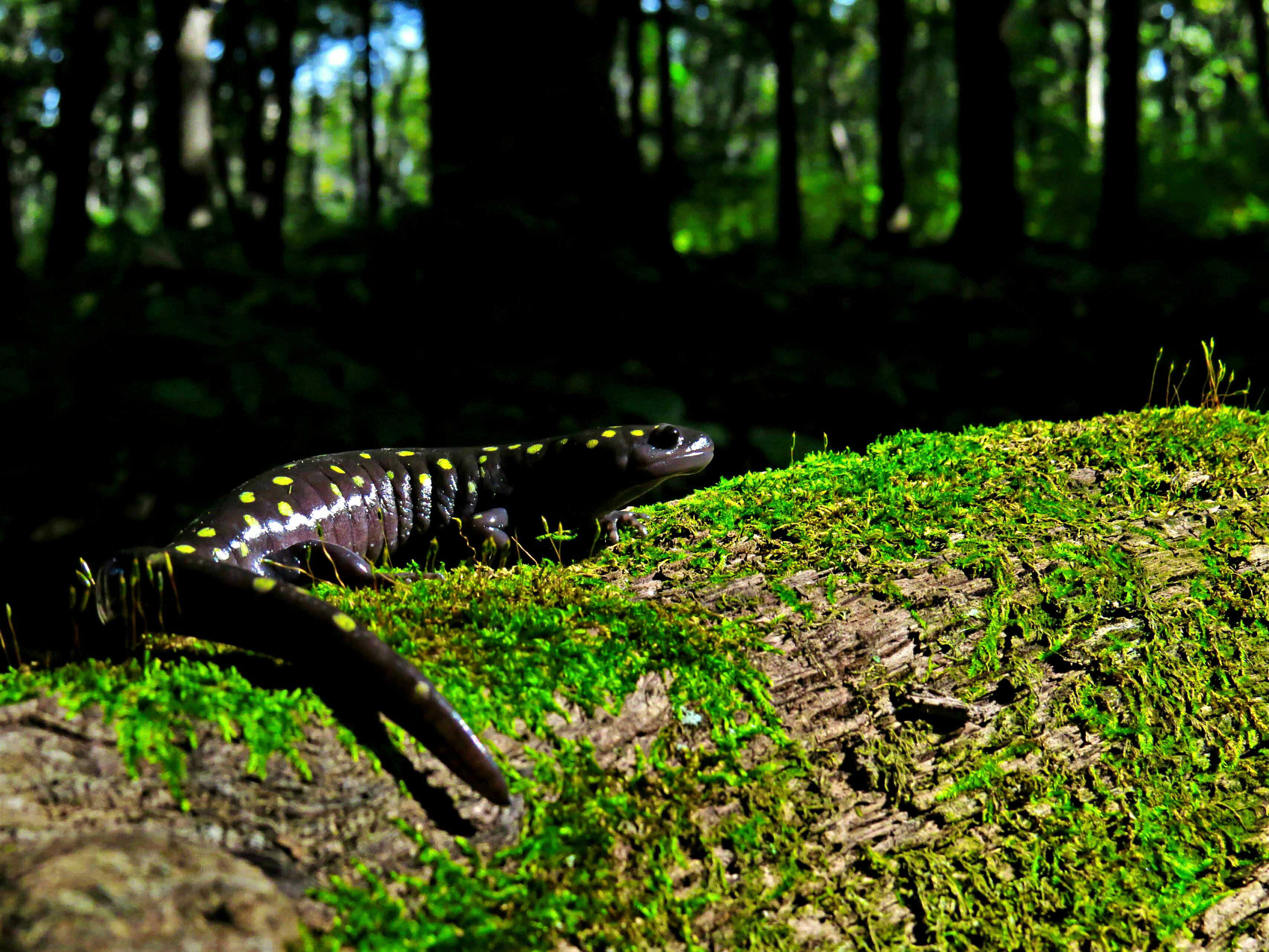 So what’s the best way to see these secretive creatures?

“You need the perfect habitat and the perfect weather,” Lyttle said. “Salamanders live in deciduous forest because they need the leaf litter on the forest floor to hide under as well as rotting logs or downed tree limbs. They also like lowland areas that flood in the spring to create fishless wetland. “During breeding season, the weather has to be above 40 degrees and wet. So the rainy days of spring are perfect salamander days.

“And once you do find one, you’re rewarded with something colorful, with big eyes and a big smile,” she said.

QUIZ: HOW SMART ARE YOU ABOUT  SALAMANDERS?

Both Lyttle and Buckner caution that if you do cross paths with a salamander, be sure to savor your good fortune but avoid the impulse to touch or pick up the salamander.

“Salamanders have very sensitive skin,” Lyttle said. “It’s absorbent like a sponge. Therefore, anything that you put on your hands you are directly sharing with the salamander. Bug spray and lotions have chemicals that could really harm salamanders, and our skin can also dry out a salamander’s skin.”

Buckner said there are a number of diseases that can also be transmitted to and from them, including salmonella from salamanders to humans and some fungal diseases from humans to salamanders.

So look as long as you’d like, but don’t touch.

Lyttle said one of her favorite salamander memories is when she found an old shoe in the forest during a “Salamander Safari” program hosted by the District. “The shoe had been there a while, even had moss growing on it,” she recounted. “I made a note of it so I would come back after the program with a trash bag and remove it. Later on, I hear someone giddy with excitement because they finally found a salamander. Where was it? Hiding under that old shoe!” 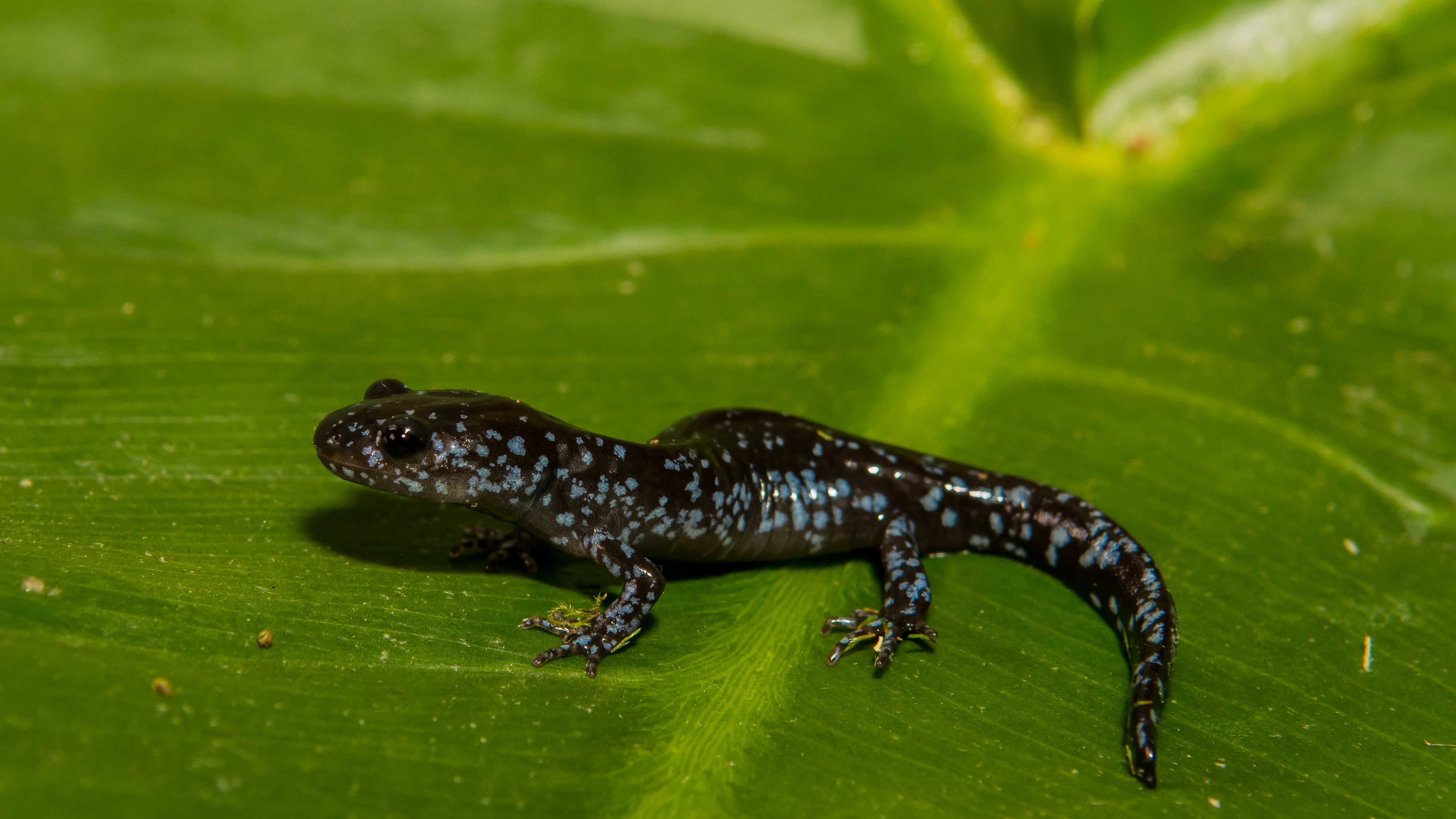