The magnificent moths of Will County

They have a bad rep as being drab, but they are among the most diverse organisms on Earth

Moths are abundant across much of the world, some striking in appearance and others not likely to catch your eye.

Illinois is home to 1,850 species of moths, with moths and butterflies combined representing one of the largest groups of insects in the state, according to the Illinois Department of Natural Resources.

Like butterflies, moths go through metamorphosis, according to the Academy of Natural Sciences. Their life cycle has four stages: egg; larva, which is the feeding stage; pupa, or the transition stage; and adult, the reproductive stage. The eggs hatch into caterpillars (larva), which grow much larger before most create a cocoon, or the pupa stage. (Some moth species complete their pupa stage underground rather than creating a cocoon.)  From the cocoon, the adult moth will emerge.

Moths are similar to butterflies, but there are several key differences. For one thing, many moths are nocturnal, while butterflies are diurnal, or active during the day. Butterflies are also typically more colorful than moths. This is because butterflies attract mates with their color, while moths use their sense of smell to find a mate, according to the Florida Museum of Natural History.

The antennae of moths and butterflies are also different. While butterflies have club-shaped antennae, moth antennae taper to a point. Moth antennae are also typically more elaborate, which enhances their sense of smell.

Here’s a closer look at some of the spectacular moths — and their caterpillars — we see in our area. 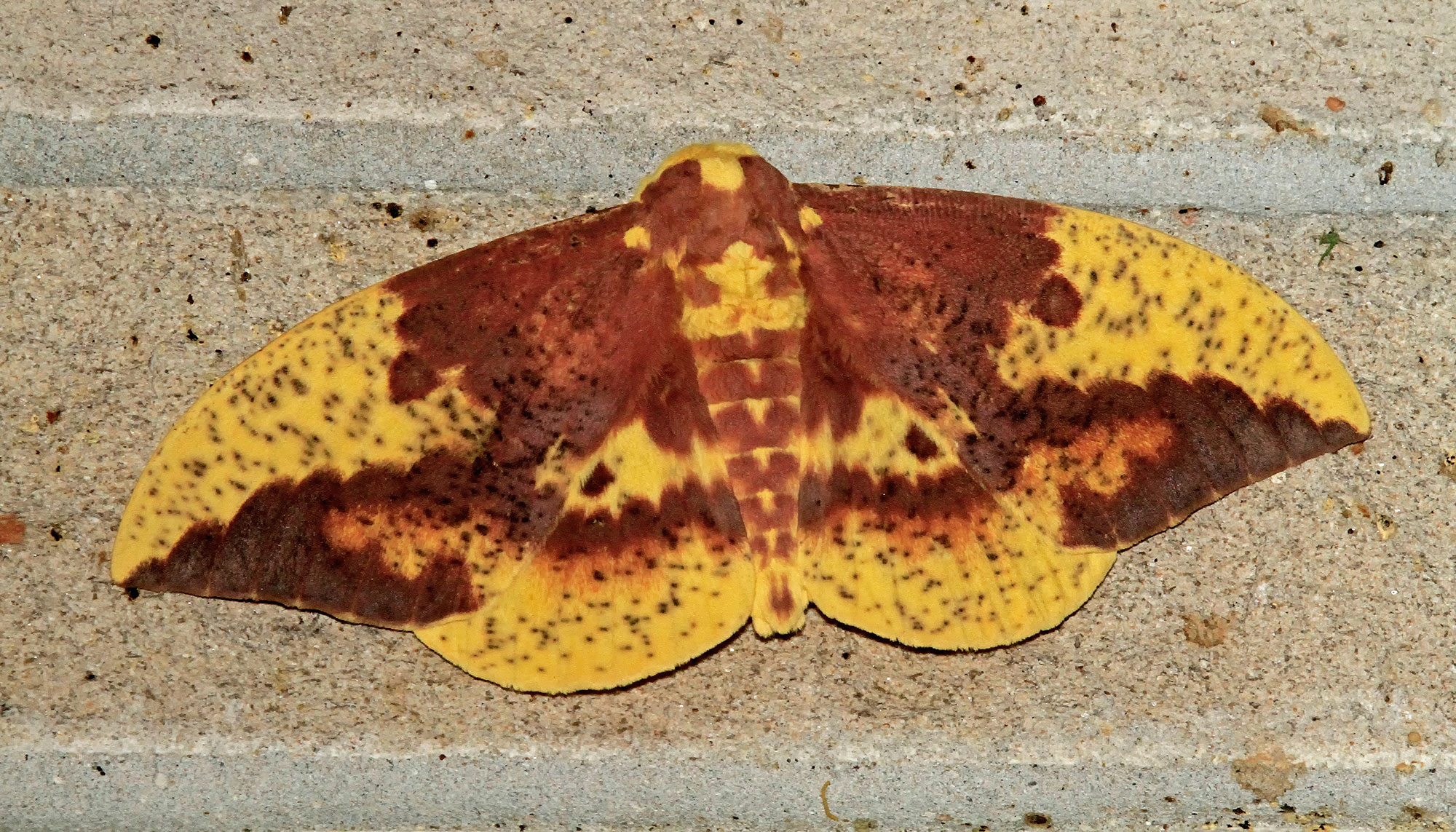 Imperial moths are one of the largest moths in the United States, with wingspans ranging from 3 inches to 7 inches, according to the University of Florida. They also have one of the most variable appearances among moths, and the females are larger than the males.

The imperial moth’s wings are yellow with dark markings ranging in color from pinkish-brown to purple to brown. The markings are varied, but the male moths tend to have more markings than females. On some moths, very little yellow is visible, with most of the wings being covered with the dark markings.

The caterpillars feed on a variety of trees, including pine, oak, maple, box elder and sweet gum trees. In its adult stage, the imperial moth does not eat. Imperial moths are found throughout much of the eastern United States, as well as in parts of Canada and South America. 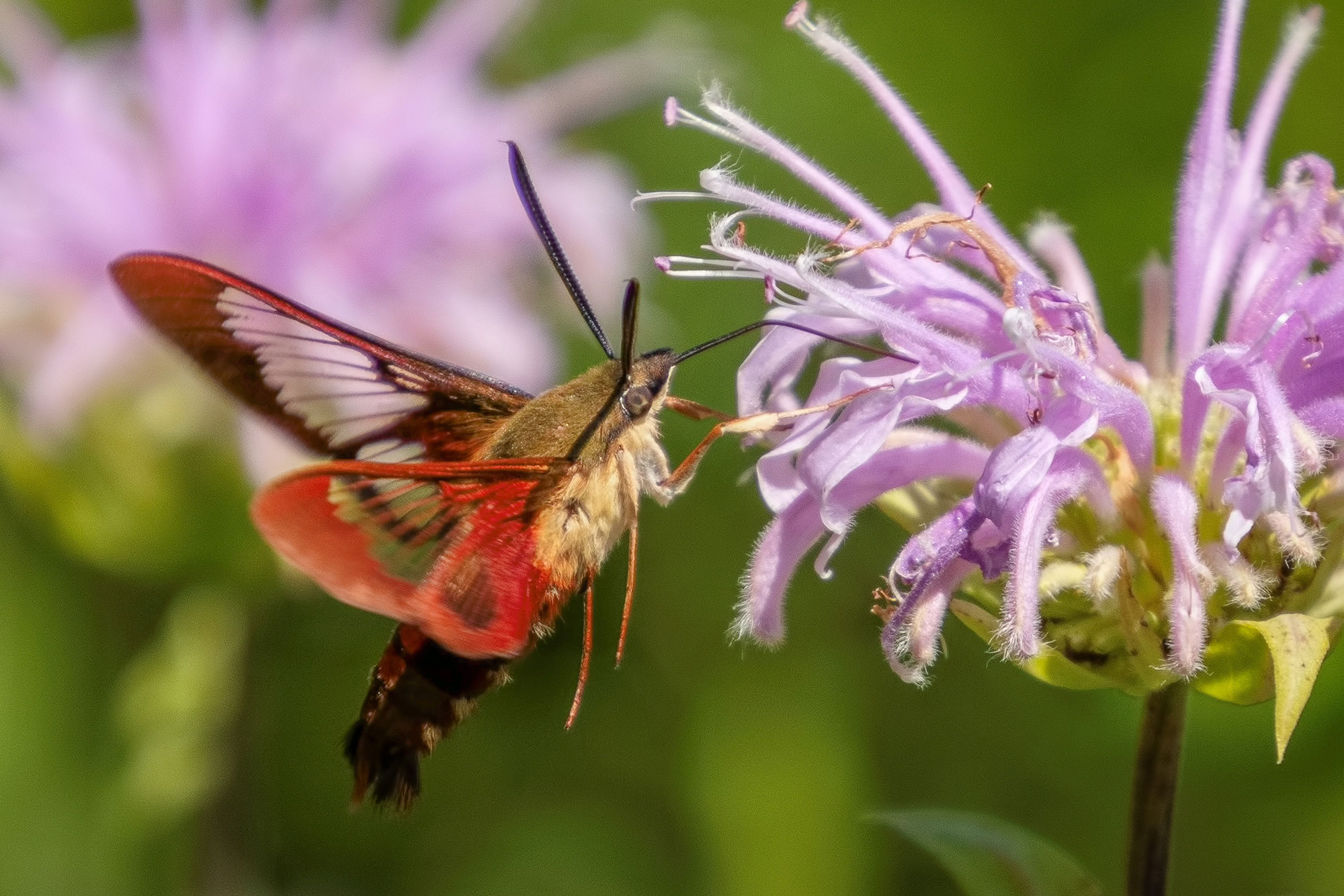 Hummingbird moths do, indeed, look like small hummingbirds, and like hummingbirds these moths can hover in flight as they move from flower to flower, drinking nectar, according to the U.S. Forest Service. These moths are varied in appearance, but typically have dark-colored abdomens and wings that are mostly translucent with dark markings on the edges. Their wingspans range from about 1½ inches to 2¼ inches.

In their larval stage, the caterpillars change drastically in appearance as they grow. When they are young, they are typically green and look like they are covered in small bumps. They grow darker as they approach full size. The caterpillars have a small horn on their back end.

The adult moths eat nectar from various flowers. The caterpillars eat vegetation from a variety of plants, including honeysuckle, hawthorn, snowberry and the European cranberry bush. These moths are common across the eastern United States and southern Canada, most often seen in open forests and woodlands. 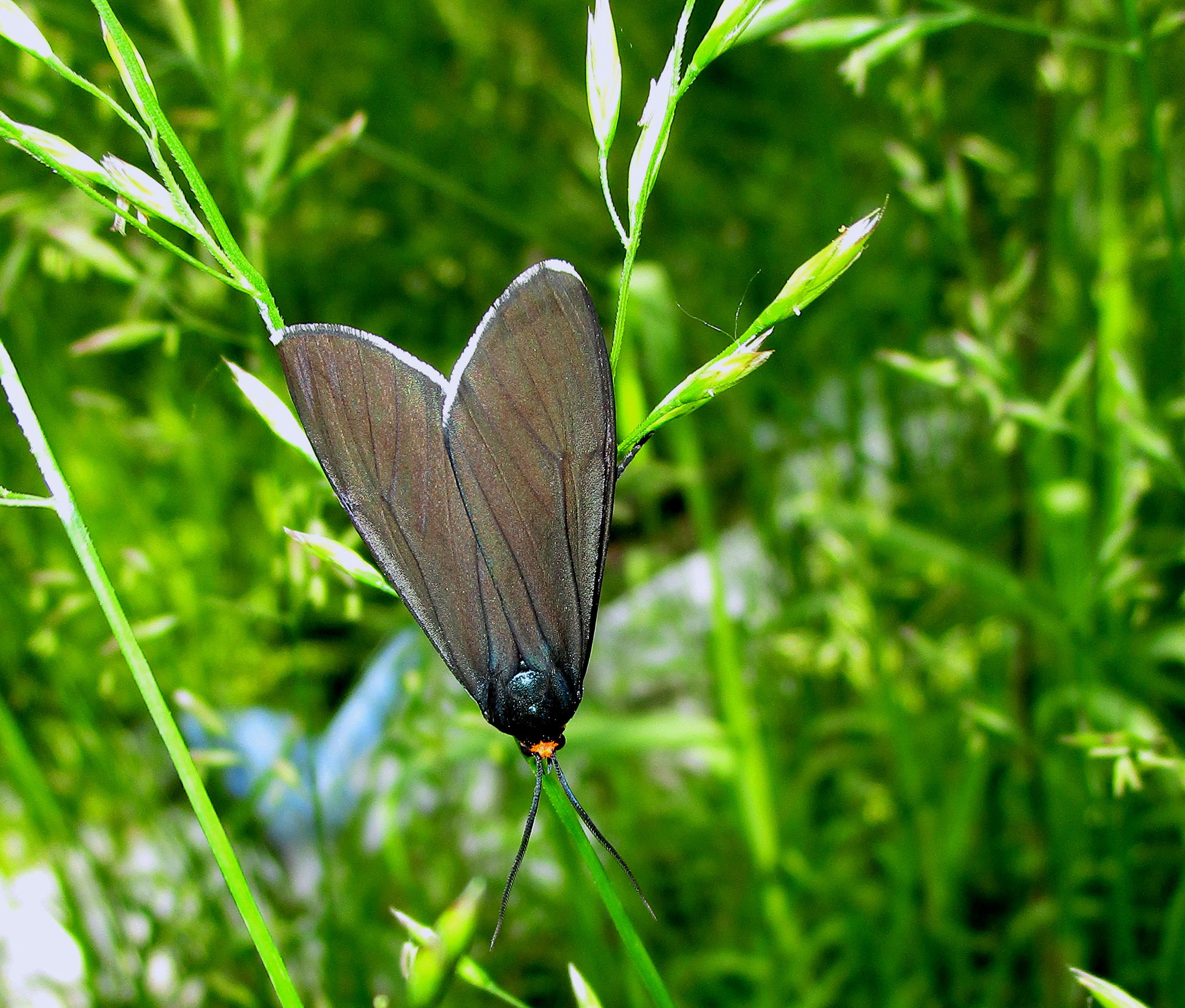 The Virginia ctenucha moth is striking in appearance with dark grayish-brown wings that appear almost black in color, according to Wild Adirondacks. The base of the moth’s wing, where it attaches to the body, is metallic blue, and its head is bright orange. The wingspan of these moths ranges from 1 3/8 inches to 2 inches.

The caterpillars of this moth are yellow and white with tufts of black that give them a striped appearance. They have red feet and are covered in barb-like hairs to warn potential predators away.

Ctenucha moths feed on nectar from flowers such as goldenrod. In the caterpillar stage, they feed on plants such as grasses, sedges and irises. These moths are seen across most of the northeastern United States, with their range extending into Canada. 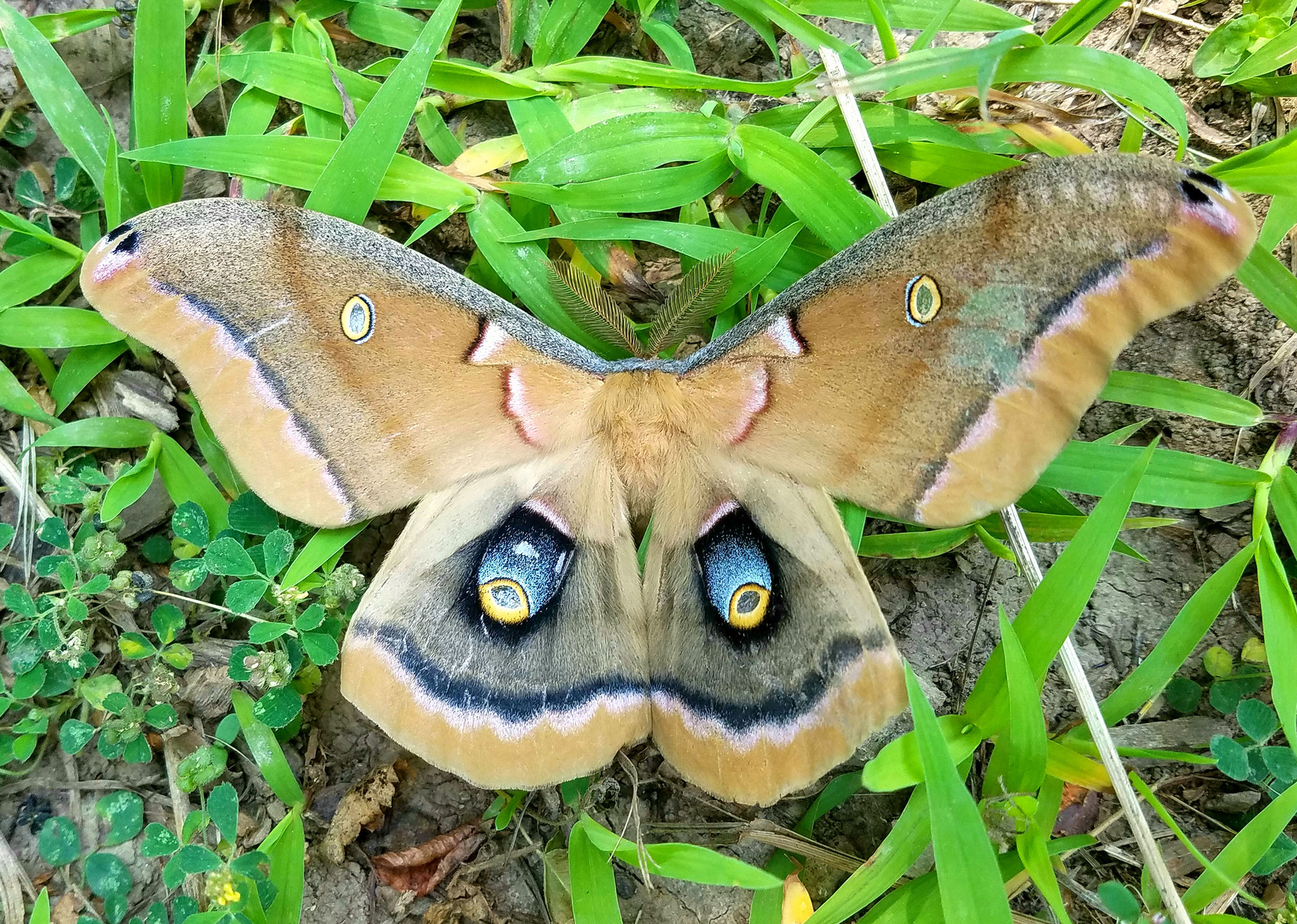 The Polyphemus moth is named for Polyphemus, a cyclops in Greek mythology, because of the eyespots on its wings, according to the University of Florida. These moths have large eyespots in the middle of their hindwings and smaller spots on their forewings.

The adult moths do not eat, but the Polyphemus caterpillars feed on a variety of shrubs and trees, including birch, maple, oak and willow trees. 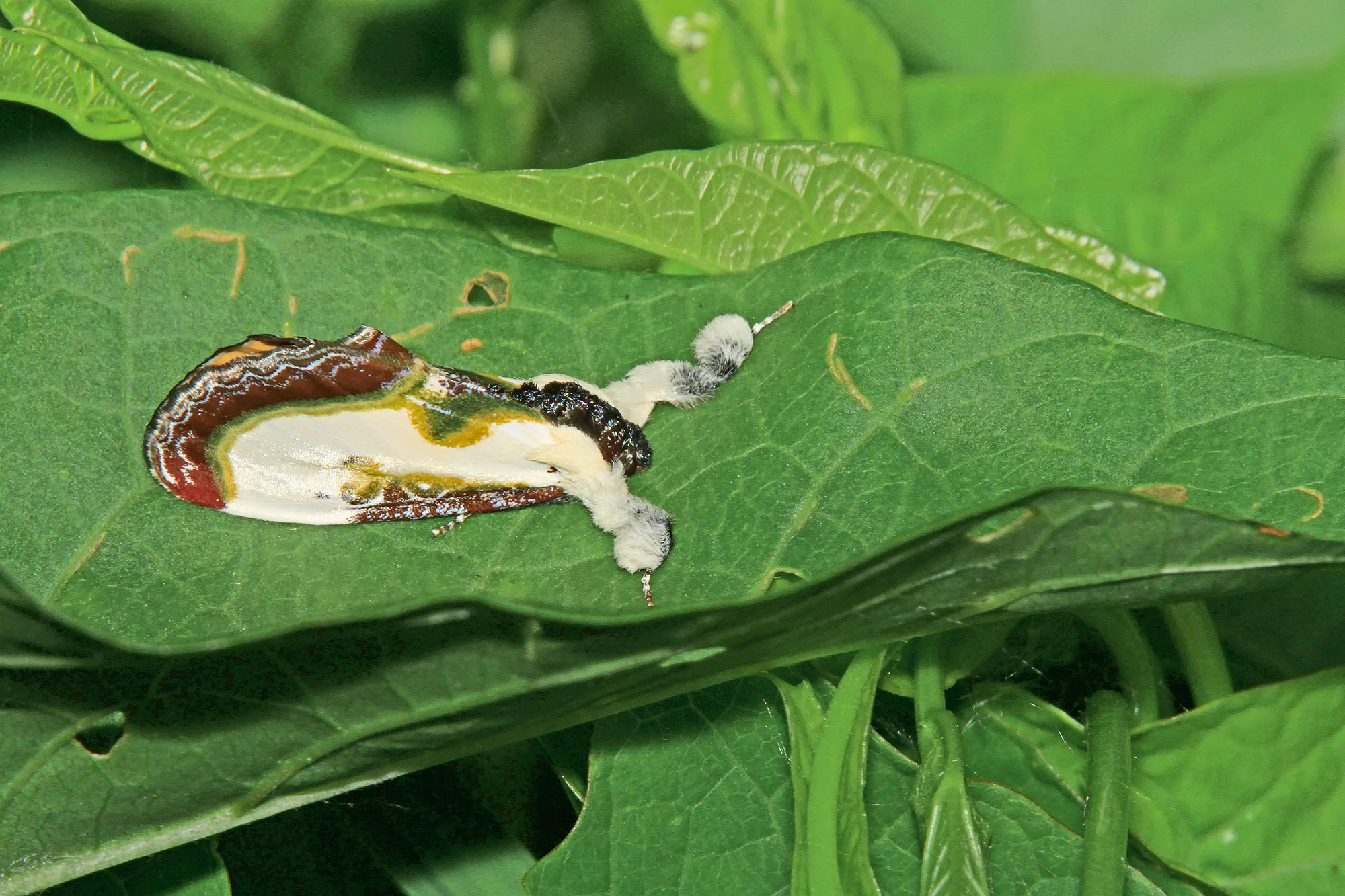 The beautiful wood nymph is often called the bird poop moth because it looks like bird droppings when it’s at rest. The moth has yellow hindwings, and its forewings are mostly white, with dark brown or maroon in a band around the edges, according to the Missouri Department of Conservation.

When at rest, the forewings are folded up, covering the hindwings. The folded-up wings are what give it the appearance of bird droppings, offering it protection from predators. The wingspan of the wood nymph ranges from about 1¼ inches to 1¾ inches.

The adult moths do not eat. As caterpillars, they feed on vine plants such as Virginia creeper, grapevine and raccoon grape, as well as buttonbush. You’ll find these moths and caterpillars across most of the eastern United States and southeastern Canada. These are green moths with coloring that appears to provide natural camouflage, ranging from olive green to greenish-brown, according to Butterflies and Moths of North America. They often have pinkish streaks in the middle or inside their wings.

Pandorus sphinx moths have a wingspan of 3¼ inches to 4½ inches. Their wings are different than those of most moths. Rather than having more rounded outer edges, these moths have more aerodynamic wings with straight outer edges.

The caterpillars of this moth are either bright green or orange in color, with six white spots on each side of their bodies and a black eyespot on their back end. They can grow to be more than 5 inches long.

The moths drink nectar from various flowers, while the caterpillars feast on grapevine and Virginia creeper. They are common in the eastern United States and southeastern Canada. 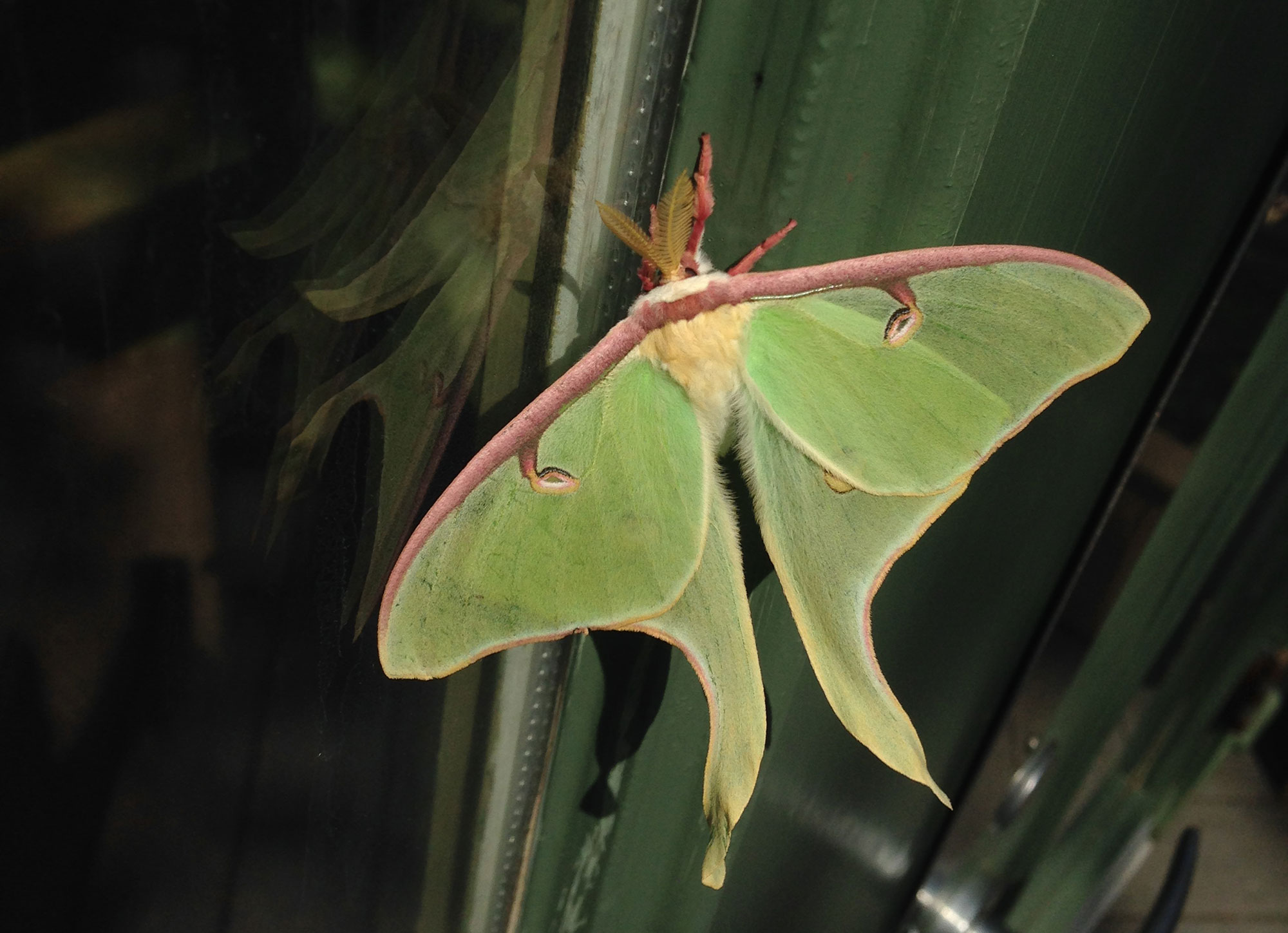 The luna moth is often regarded as one of the most beautiful moths, named for the moon-like spots on its hind wings.

These moths are mostly pale green with a purple or purplish-brown border around the outer edges, according to the University of Florida. They are different than most moths we see locally in that their wings have long, curving tails. Their wingspan ranges from about 3 inches to 4 inches.

Luna moth caterpillars are mostly green with a brown or greenish-brown head, and they are sparsely covered in short, white hairs. They grow to be about 2 inches long.

Luna moths can be found all over the eastern United States and southeastern Canada, mostly in forested areas. The caterpillars feed on a range of trees, including hickory, walnut, sumac and white birch, while the moths do not eat. 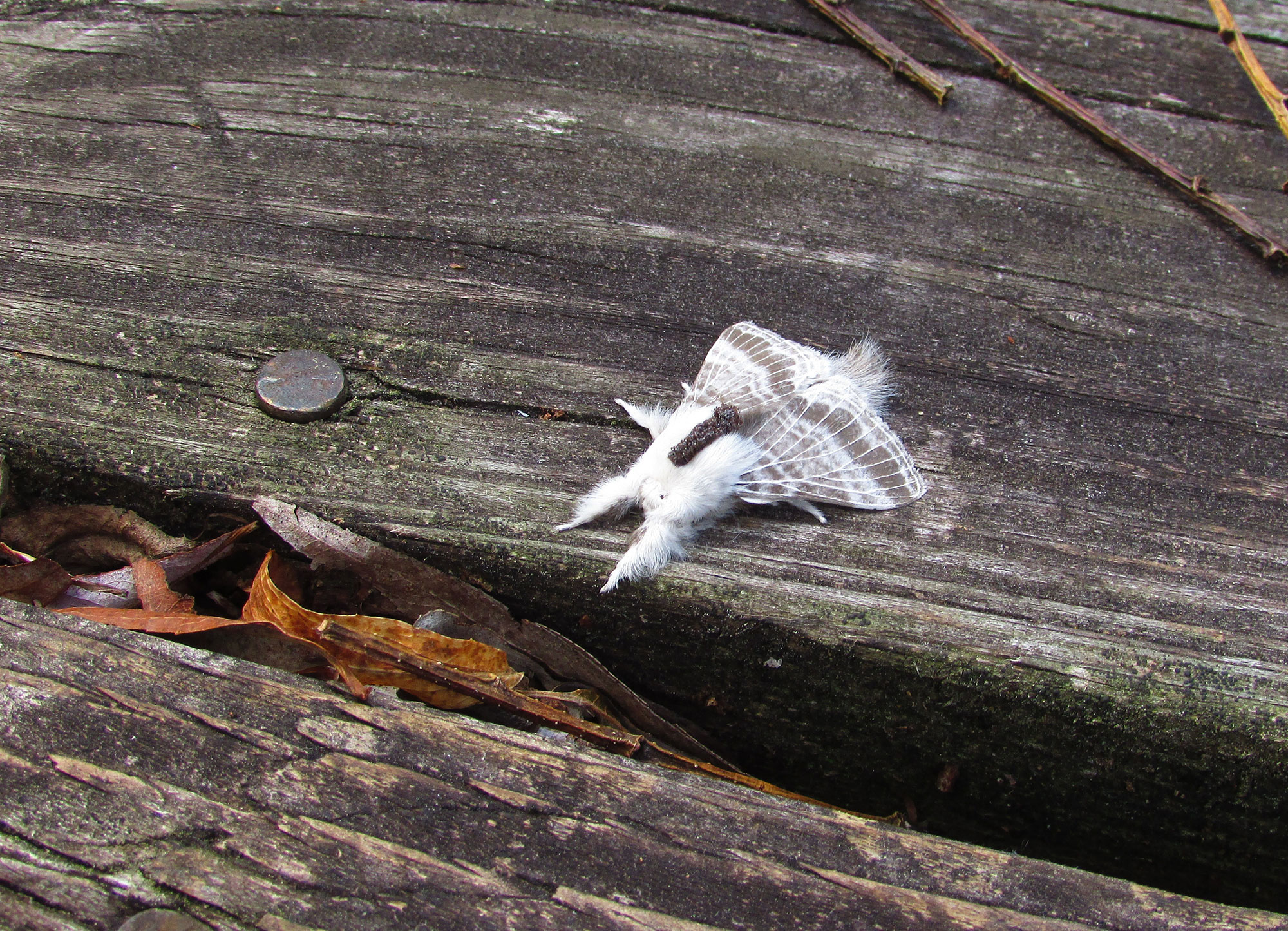 The large tolype moth is different from most we see locally because it has a hairy, white body and its legs and antennae are also covered in hair, according to Butterflies and Moths of North America.

The wings of this moth are gray or brown with white wavy lines running across them. They can vary in color from light to dark gray and brown. Their wingspan ranges from about 1¼ inches to 2¼ inches.

Large tolype caterpillars are gray or grayish brown and have long hairs on them. They can grow to be a couple of inches long.

The moths of this species do not eat. Caterpillars of this moth eat vegetation from a variety of trees, including apple, plum, birch, elm and oak trees. The large tolype moth is found across much of the eastern United States and Canada, although it is not as widely distributed as some of the more common moths. 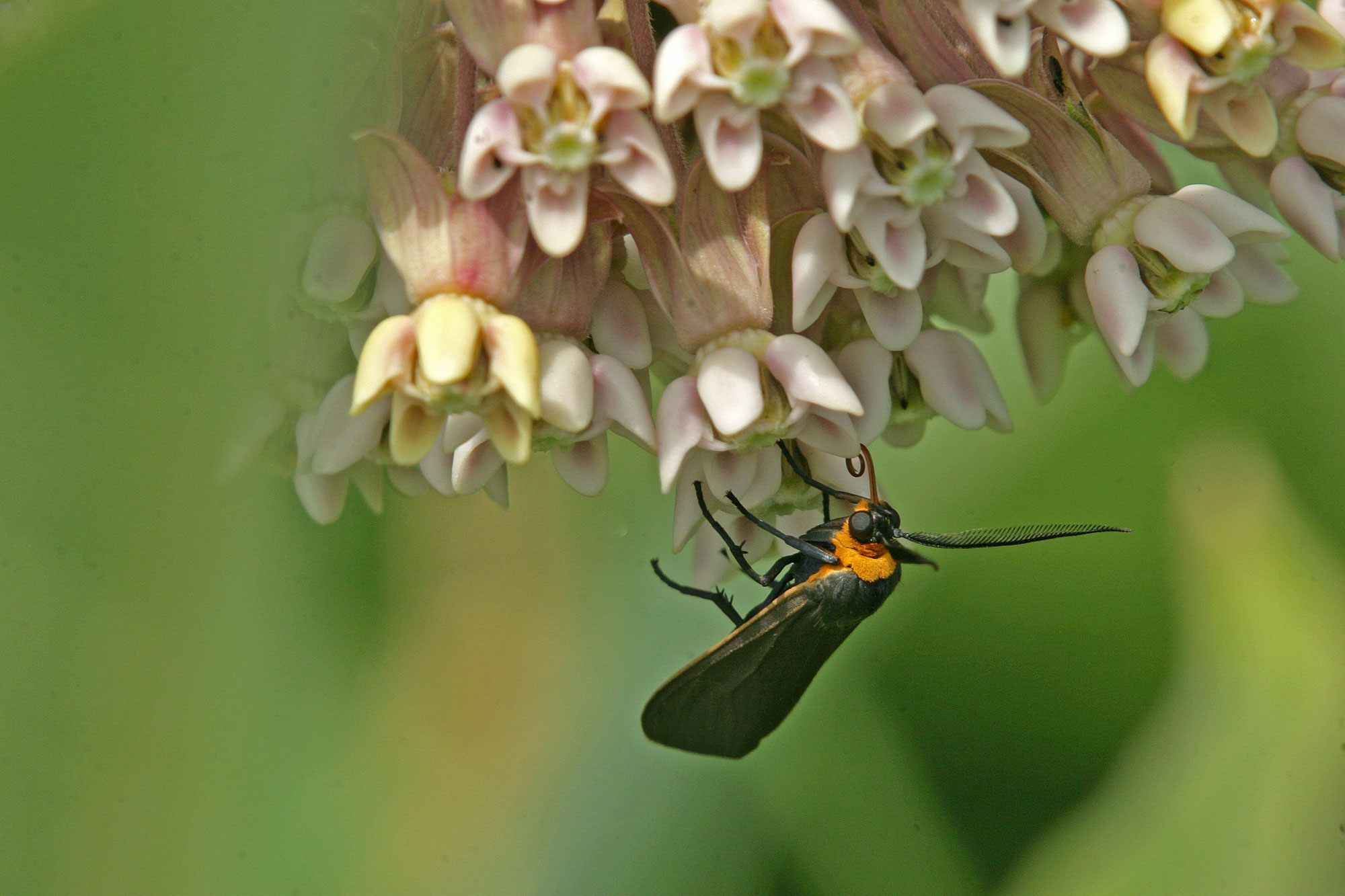 Yellow-collared scape moths are named for their appearance. Their wings are narrow and black, sometimes appearing iridescent in the sunlight. Their name is derived from the yellow or, more commonly, orangish-yellow collar between its head and wing, according to the Missouri Department of Conservation.

These are small moths, with a wingspan ranging from just 1 inch to 1½ inches. Because of their narrow wings, they can sometimes be mistaken for a lightning bug or even a wasp.

The caterpillars are covered in long hairs. They appear to be black or dark brown in color with thin yellow or orange stripes on their back and sides.

Adults eat nectar from a variety of flowers, particularly milkweed and those in the sunflower family, while the caterpillars feed on grasses, sedges and lichens. They can be found throughout much of the United States and Canada, although they are more common in eastern areas. 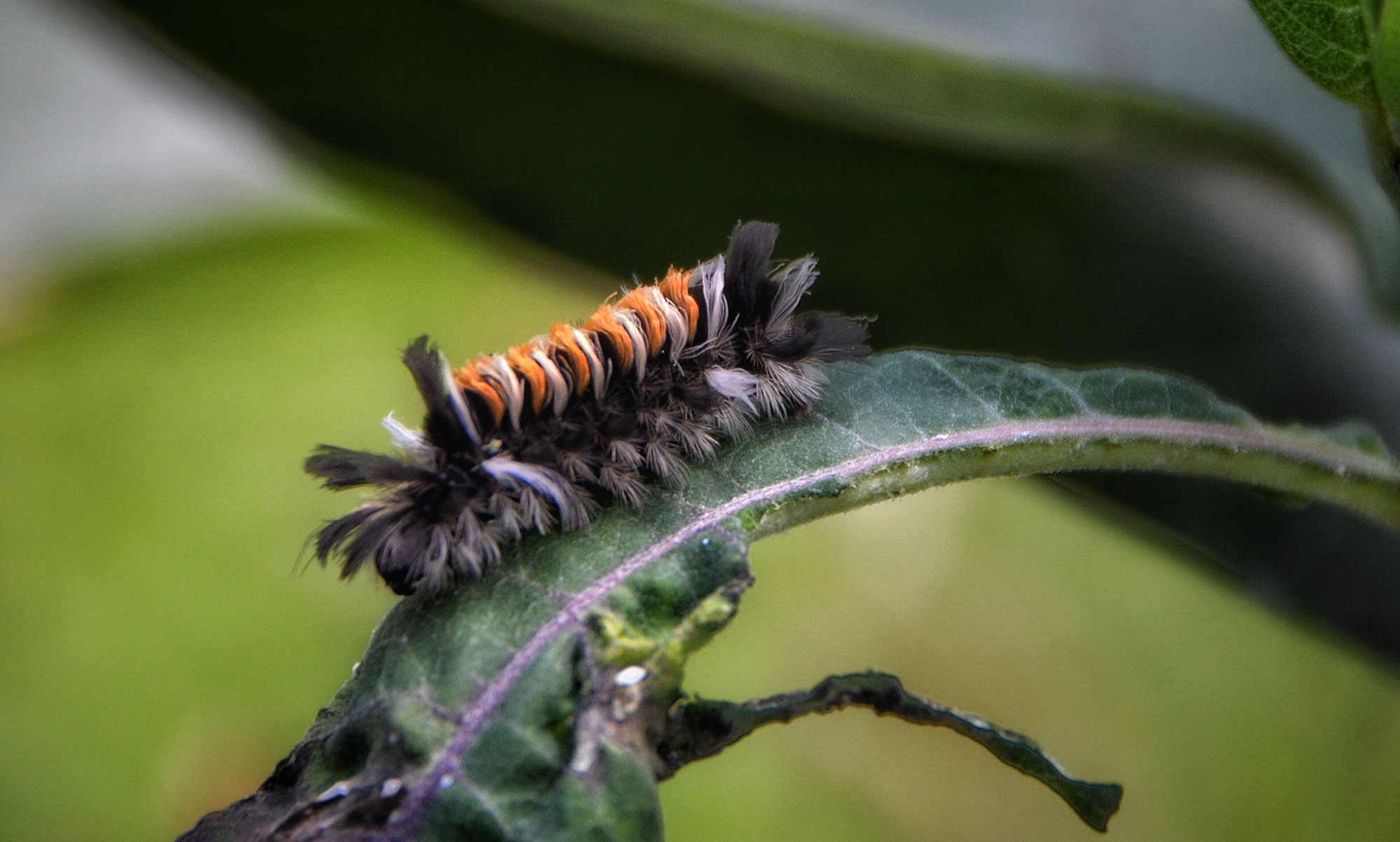 The milkweed tussock moth is rather unremarkable in its adult stage, a small gray or grayish brown moth with wings mostly absent of any markings. It’s fairly small as well, with a wingspan between 1½ and 1¾ inches.

In its larval stage, the milkweed tussock caterpillars grow to be eye-catching and imposing looking. They start as small yellowish caterpillars and slowly grow, developing bunches of tufted hair in black, orange and white, according to the Michigan State University Extension. The black, orange and white colorings lend themselves to the secondary name for the species: milkweed tiger moths.

Like the more well-known and celebrated monarch butterflies, milkweed tussock caterpillars feed exclusively on milkweed plants. Often groups of the caterpillars will feed on a plant, eating all the leafy vegetation. These moths can be found wherever milkweed grows, but are most common in the eastern United States and Canada. 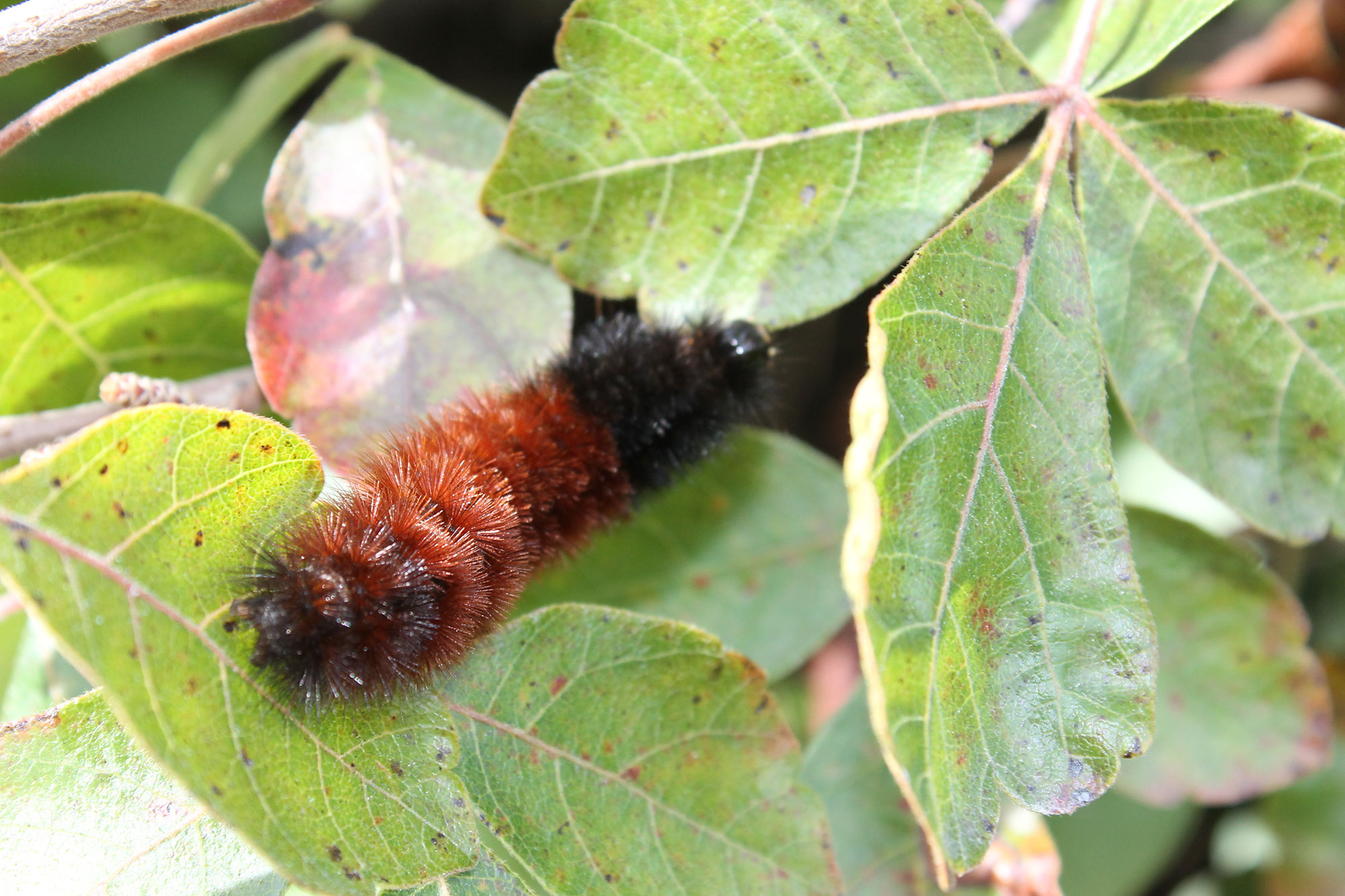 This is another moth that’s unremarkable in its adult stage: a yellow, orangish-yellow or tan moth often colored with faint lines and small, black spots. These moths are more recognized in their larval stage, when they are known as woolly bear caterpillars, according to the Missouri Department of Conservation.

The caterpillars, also known as woolly worms or banded woolly bears, start as small, mostly black caterpillars. As they grow, they become more reddish-brown and less black, with the black usually concentrated on both the front and back ends of the caterpillars. When disturbed, these caterpillars will role themselves into a ball.

While the adult moths do not eat, the caterpillars feast on a variety of plants, including grasses, clovers, sunflowers and maple and elm trees. They are found throughout the United States and southern Canada, and because the caterpillars are often seen in fall they are considered to be a sign of winter to come. According to an old wives’ tale, you can tell how long winter will be by how long the reddish-brown band is on the caterpillar. There is no truth to the tale, however.

Lead image courtesy of a hummingbird clearwing moth via Shutterstock