What's got you sneezing? Blame ragweed, not goldenrod 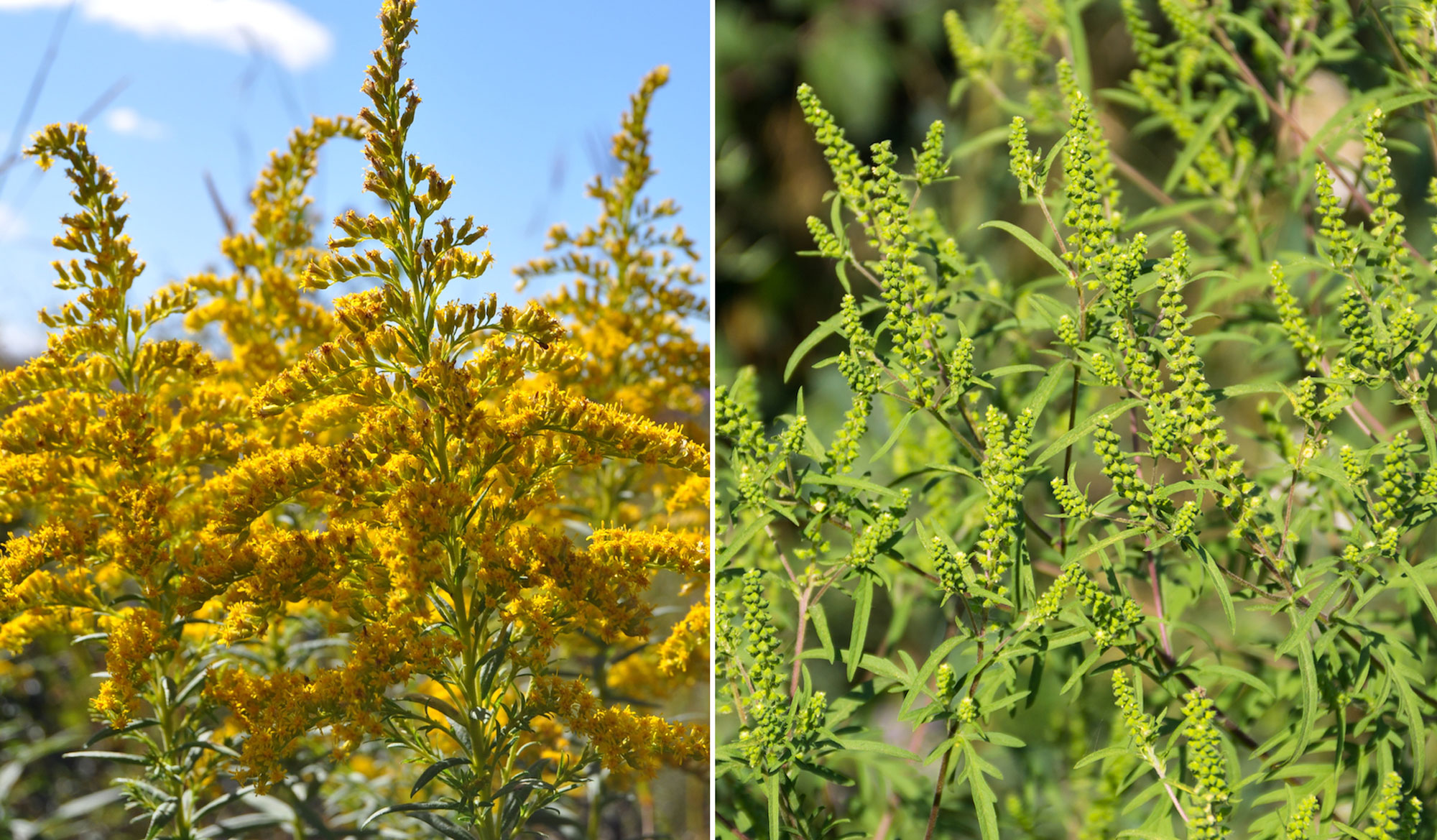 Goldenrod (left) and ragweed. (Photo on left by Glenn P. Knoblock and right via Shutterstock)

There's something in the air, and it might be making you sniffle and sneeze. Plenty of us suffer from seasonal allergies, and at this time of year there's usually one culprit: ragweed.

Ragweed is a common cause of seasonal allergies in late summer because that is when the plants begin to release their pollen into the air, according to the Asthma and Allergy Foundation of America. For the approximately 15% of Americans who are allergic to ragweed pollen, this can be an especially miserable period because it can cause itchy and puffy eyes; an itchy nose and throat; a stuffy or runny nose; sneezing; and mucous in the throat caused by postnasal drip.

While ragweed is the source of misery for many people, an innocent plant — goldenrod — is often wrongly blamed. Both ragweed and goldenrod belong to the Asteraceae family, and 20 species of ragweed and more than 75 species of goldenrod are native to the United States, according to the Clemson Cooperative Extension.

The misdirected blame goldenrod gets for seasonal allergies, also known as hay fever, at this time of year is partly because both bloom at the same time — right about this time every year, the Clemson extension reports. Goldenrod and ragweed also both frequently grow in the open fields and roadside ditches. But that's about where the similarities end.

Although both plants typically bloom from late July into September, the ragweed species common in Illinois — giant ragweed and common ragweed — produce green, non-showy flowers, according to the University of Illinois Extension. On the other hand, goldenrod typically has showy yellow flowers.

The two plants are also pollinated differently. Ragweed, which does not have nectar in its flowers, relies on wind for pollination, which is what makes it so tough on people who are allergic. Wind can carry ragweed pollen miles away from its plant of origin, the Clemson extension reports, and one ragweed plant can produce more than 1 billion grains of pollen. It's enough to make you sneeze just thinking about it.

Goldenrod, on the other hand, is pollinated by insects, which visit for its nectar. Pollen from goldenrod plants is heavier and stickier than that of ragweed and cannot be carried by the wind. Instead, pollinating insects like bees, beetles, butterflies and wasps visit the plants and aid in pollination.

About 75% of Americans who are allergic to plants that produce pollen are allergic to ragweed, according to the University of Florida Extension. For these hay fever sufferers, being able to identify ragweed is important so they can remove it from their yards before it begins releasing its pollen to the wind. Because ragweed does not produce colorful, showy flowers, it's easiest to identify by its stems and leave. The plants typically produce rough and hairy branching stems that are purplish in color. The leaves are smooth and divided into lobed portions.

The best way to control ragweed plants is to either mow or remove them with a hoe earlier in the summer, before the plants have bloomed, the Illinois extension advises. The plants are shallowly rooted and are not difficult to remove by hand.