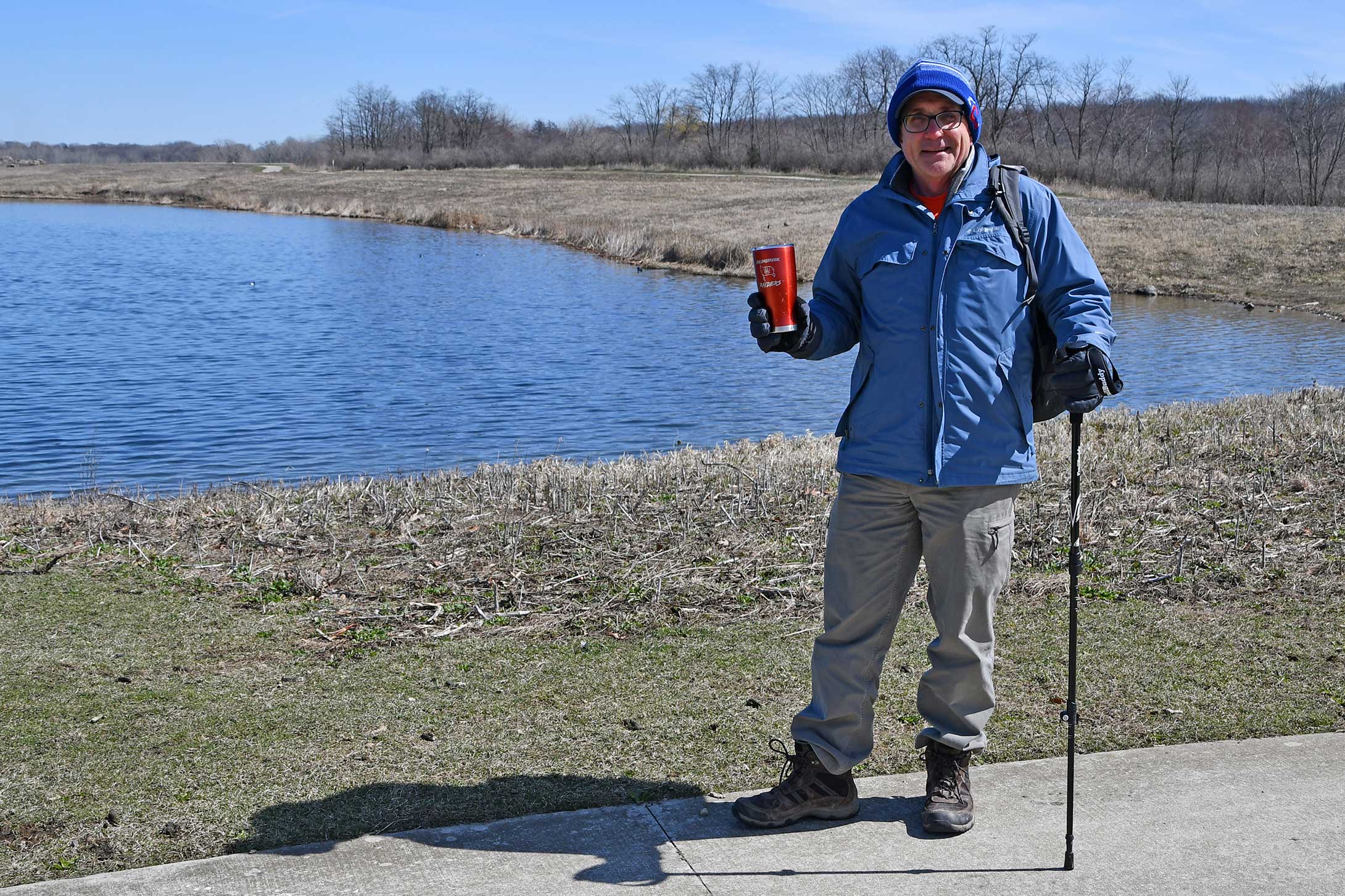 Sixty-two-year-old Bolingbrook resident Mike Slowik has thrown down the gauntlet for those who are attempting the Spring Ninety-fiver Challenge.

Slowik walked all 95 miles by March 20, only 20 days into the four-month challenge. The challenge was created to celebrate the Forest Preserve District’s 95th anniversary this year and it runs through June 30.

When interviewed post-challenge at Whalon Lake recently, Slowik said he was surprised to be the first to finish.

But it isn’t surprising once you hear about his history with fitness. He once biked 4,000 miles from Bolingbrook to Alaska. And when the pandemic hit, he said he had nowhere to go, so he “did the Forrest Gump thing” and lost 22 pounds by walking 3,314.6 miles from March 2020 to February 2021.

That’s why this year’s Ninety-fiver Challenge was a piece of cake for him, and he could easily rack up the miles quickly. For instance, on March 5, Slowik trekked 15.27 miles on the Wauponsee Glacial Trail, according to the Runkeeper phone app Slowik used, and all participants are encouraged to use to track their mileage.

“There are some surprisingly really cool trails in Will County,” he said. “It’s amazing.”

"His submission was so great because you could see he set goals for himself to finish the challenge," she said. "He went above and beyond to track his miles using percentages left of the 95 miles until he met his goal of 100%. My favorite part of his submission was how he learned about new trails to walk and hike in Will County."

On each outing, Slowik made sure he was prepared. Most important was his mug of coffee, which he said is the fuel that keeps him going.

“Life doesn’t exist without coffee,” he joked. “When I’m out on the trail, enjoying a good cup of coffee adds so much to the enjoyment and the experience. And it helps warm you up when first starting out on a chilly morning as well as giving you a nice energy boost!”

He also uses a walking stick, something his wife Diane bought for him as a present, and he carries a medical kit, a spare phone charger, water and wears proper attire for the weather. Even with the bit of gear he carries, hiking is one of the best activities because it’s “dirt cheap,” he said. “You don’t need a lot of money to do this.”

When he submitted his mileage, Slowik thanked the District for organizing the program.

“Thanks for doing this,” he wrote. “It was great! I hike in many forest preserves throughout northeastern Illinois and ours here in Will County are some of the best! This challenge gave me motivation to get out and visit our trails and (preserves), some of which I didn’t know existed. This was lots of fun – keep up the great work!”

Slowik, the ninth of 12 children, said his parents instilled a love of nature into him and his siblings, and that's how he has coped with the stress of working in Information Technology all these years.

“When I’m out there walking, you know what I’m listening to? Nothing. I just turn it all off and I hear the birds.”

And don't forget, if you want to be like Mike, there is still plenty of time to join the Spring Ninety-fiver Challenge. Simply record your running, walking or biking miles on Forest Preserve trails and upload them to receive a small wallet with a zippered pouch to commemorate your accomplishment. An online form is available for submissions as well as a downloadable paper submission log.