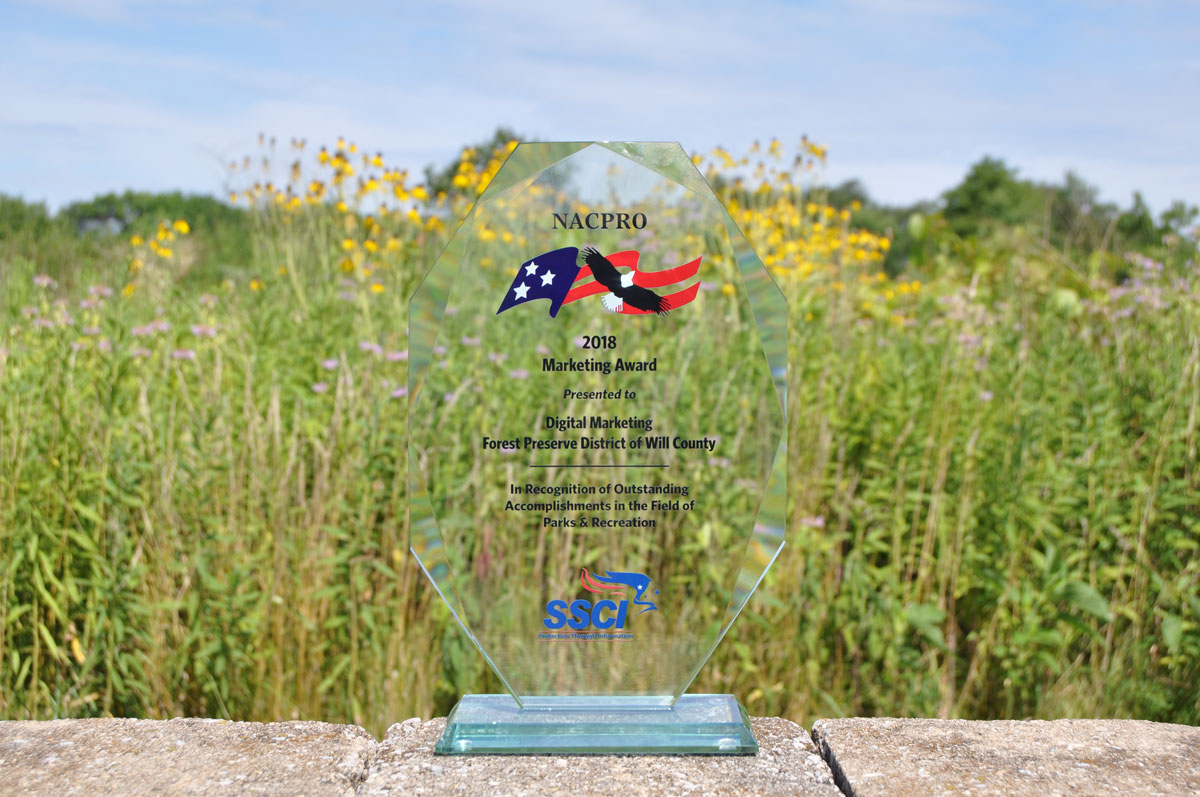 The Forest Preserve District’s digital marketing efforts have been honored with an Award of Excellence from the National Association of County Park and Recreation Officials.

“The association recognized the tremendous achievements of our organization in developing and growing our following across a number of social media platforms, our newsletter and website,” Schultz said. “They also acknowledged the quality and breadth of the material produced and promoted.”

The award signifies peer recognition for a job well done, he added. “The achievement goes well beyond just the Forest Preserve District of Will County and truly adds to the conservation conversation throughout our region.”

In the past two years, the District’s Facebook account has skyrocketed from 5,000 followers in 2016 to 40,000 today for the main page and from 14,000 to 68,000 for all of the pages managed by the District. The Forest Preserve's main Facebook page has more followers than any other forest preserve district in the state.

The numbers increased dramatically on the Forest Preserve's other social media platforms during a similar time period. The District's Twitter account increased from 1,700 followers to 9,600, and Instagram grew from 400 to 9,700.

Videos produced by the District's marketing and communications department were viewed 2.5 million times from March 2016 to February 2018. Video topics included a woodcock’s mating waddle, a dog decked out in a GoPro camera romping around in a dog park, aerial views of preserves and underwater footage of fish at preserve lakes.

Also during this time period, the District created: a weekly digital version of its newsletter, The Citizen; an email blast called The Weekly Five; a Will County Wildlife Facebook group for nature photos; Today's Bird, a separate Twitter account dedicated to the birds of Will County; a Preserve the Moment photo contest; a series of 360-degree photos that have been viewed more than a million times; and a new and improved website that is easier to use and compatible with mobile devices.

“In our work to increase public engagement, we strive to create an appreciation for the Forest Preserve, its mission and, ultimately, the importance of open space,” said Laura Kiran, director of marketing and communications. “The success of the District’s digital marketing efforts plays a critical role in fully realizing this end goal.”

Digital marketing accomplishments were a team effort. Staff and volunteers throughout the District provide story ideas, photos, video and educational content that are shared across all platforms.

“While it’s true that we have a talented marketing staff, our success really hinges on the collaboration that exists among the District’s departments,” Kiran said. “We couldn’t have achieved as much as we have without the support and expertise of our colleagues throughout the Forest Preserve.”

The bottom line is that the effort is working and people are noticing and appreciating all the District has to offer, she added.

“It’s exciting to see our public engage with our content,” Kiran said. “For us, that’s a win. And we hope along the way they have a greater understanding of the Forest Preserve’s purpose.”