From Human History to Natural History

When the Forest Preserve District of Will County accepted a donation of the Vermont Cemetery from the National Land Institute in 1998, it was a prized acquisition. This small, one-acre parcel could be the only piece of land in the county that had not been disturbed by farming, grazing or development. As a consequence, it held a treasure trove of native plants that would have been familiar to pioneers who first settled in the area.

Records show that the original land patent for the cemetery dates to 1843. The original owner transferred the deed to 11 neighbors in 1848.

Prior to 1961, the cemetery lay neglected except for occasional burning and cleanup by the adjoining landowner, Harley J. Schoger. Over the years the cemetery had suffered the theft of gravestones, vandalism and other abuses.

That all changed when Dr. Robert Betz, a biochemistry professor at Northern Illinois University, and volunteer assistants began managing the special one-acre plot in 1961. According to a 2007 article in Chicago Wilderness Magazine, published with his death in that year, Betz "became one of the first to recognize the extent of the Midwest's surviving original prairie ecosystems . . . (and) was known as 'Mr. Prairie' because of his efforts to save 44 'cemetery prairies' throughout the Midwest." 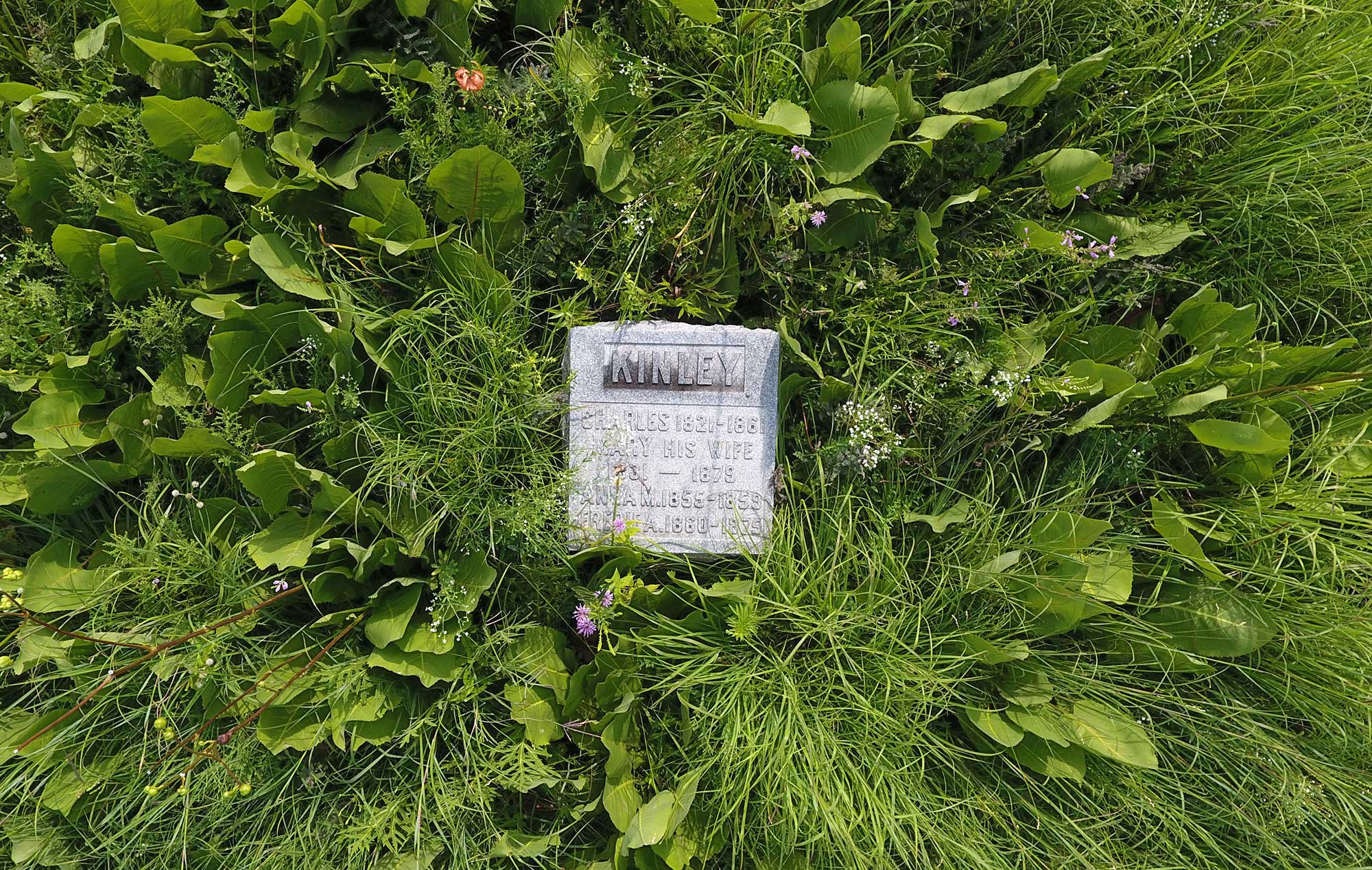 Protecting the cemetery became easier in 1970 when volunteers donated funds to construct a six-foot- high chain-link fence around the cemetery to stop trespass, vandalism, theft of gravestones, trampling and digging of plants. This original enclosure has since been replaced with wrought iron fencing.

A plant survey conducted by the Illinois Natural Areas Inventory identified 70 native species of plants at Vermont Cemetery, 10 percent of all of Illinois' Grade A dry-mesic species. Included are the federally threatened and State-threatened Mead's milkweed and the State-threatened Hill's thistle.

Vermont Cemetery was dedicated as a state nature preserve in 1999. The Forest Preserve acquired an additional 24.4 acres around the preserve to serve as buffer to this unique property. Improvements to the site have included an overlook of the historic cemetery prairie, accompanied by limestone seating.

While the Forest Preserve's interest in the property was because of the native flora, two local residents were interested in the bodies that are interred there. In a 2011 interview with the Forest Preserve, Will County residents Joyce Koretke and John Hafenrichter discussed having relatives buried at the Vermont Cemetery: Koretke’s great-great grandfather and Hafenrichter’s relatives, who married into the same family, are among those buried there. Many of the gravestones that remain are made of sandstone, and the inscriptions have been worn away by time. But a few of the surviving memorials were made of marble, and their inscriptions are still readable today.

One of these marble headstones was of John Book, the great-great-grandfather of Koretke. The cost of his grave marker suggests the family was wealthier than those having the humble sandstone markers that surround his.

Hafenrichter, who passed away since the Forest Preserve’s interview with him, spent years looking into local Naperville history and uncovered answers to questions that time has obscured. According to his research, John Book arrived in the area about 1847. He was not among the first settlers — that distinction went to John Naper, who put down roots in 1831 — but Book established a working farm that led to a good degree of family prosperity.

Hafenrichter speculates that the name Vermont Cemetery, which dates to the 19th century, was the designated resting place for settlers and laborers who originated from Vermont. Many of those buried in the Vermont Cemetery, Hafenrichter said, were laborers, some likely itinerant workers who moved from farm to farm as work became available. They were remembered with the sandstone markers. Hafenrichter's research has revealed that the original pioneers to the area, dating from Naper's arrival in 1831, settled in four primary groups, according to national origin. Each group had its own church, which was ministered to by the same preacher who made the rounds from congregation to congregation. 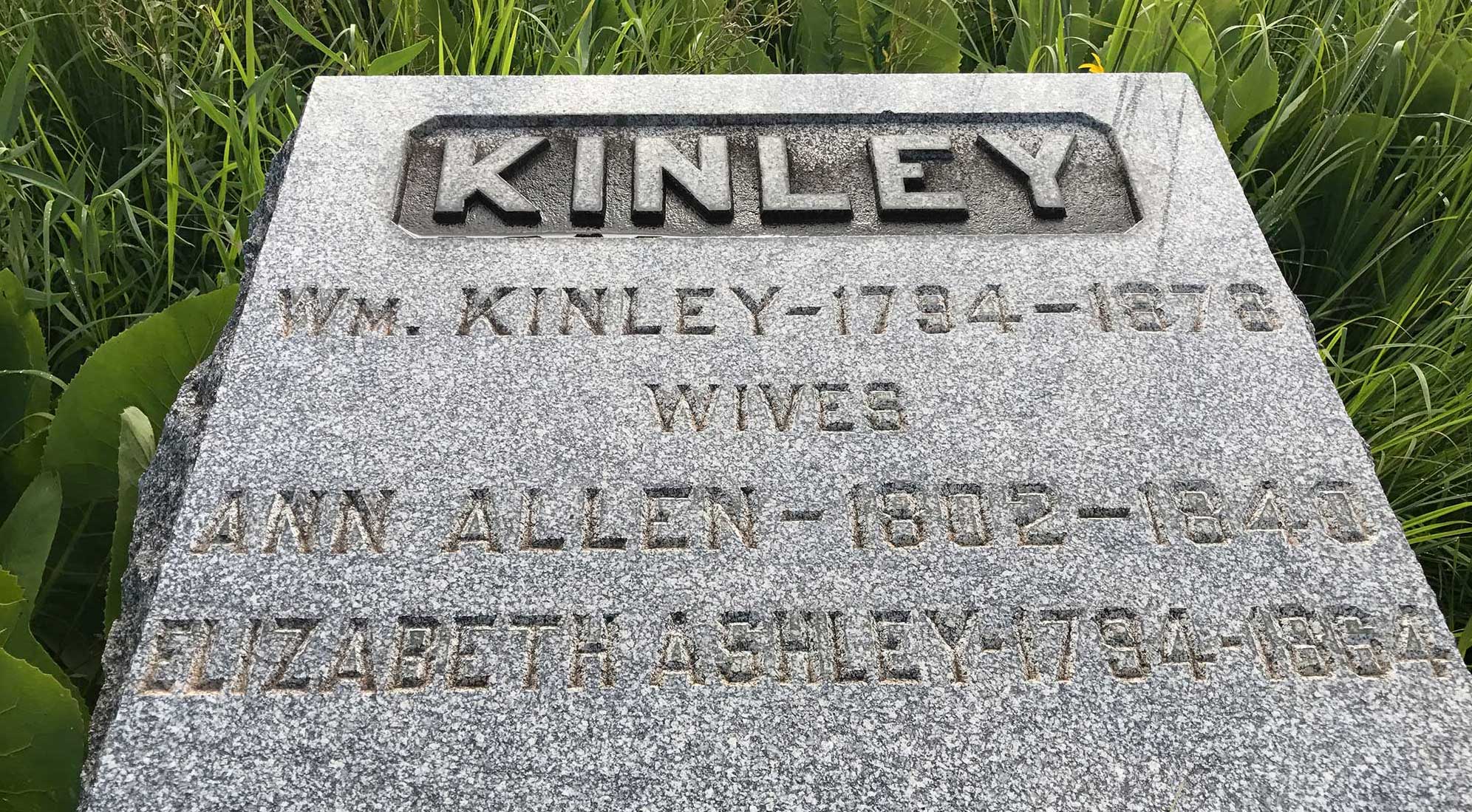 The bodies lying in the Vermont Cemetery, Hafenrichter found, were of the Wheatland Congregation. These were largely immigrants from Germany, and a few of the legible grave markers contain Biblical passages in German.

Joyce Koretke said that her great-great grandfather was born in Germany in 1803 and died in 1873. Lying beside him is his second wife, Margaret, who died in 1886.

There might still be grave markers buried beneath the topsoil. The property all around the cemetery has been farmed for 150 years, and the dirt and dust kicked up from year after year of farming would settle over the headstones lying flat on the ground, depositing layers of soil over them.

In fact, this can be observed today. The Vermont Cemetery parcel is elevated 12 to 18 inches above the surrounding farm field, illustrating the top soil that has been lost through wind and water erosion over the last century and a half.

But if any additional graves have been buried beneath the soil, they will likely continue to be lost to time. With the designation as a nature preserve, the Vermont Cemetery is now forever protected from disturbance.

However, this very protection assures that those whose remains are buried at the Vermont Cemetery will be safeguarded in perpetuity. If they were to arise today, they would be astonished at how the Naperville that they knew had changed to a 21st-century city. But they would recognize the array of plants that surround them. Through the natural world, this would tie their era to our own.