Uncovering the mystery of Kirtland's snakes

Not much is known about them, but researchers are using one Will County preserve to change that

The Kirtland's snake is shy and secretive, and, as a result, not a lot is known about it. A group of researchers is working hard to change that. They're developing a better understanding of this small but beautiful snake that is widely scattered in small enough numbers to put it on Illinois' threatened species list.

These non-venomous snakes that primarily feed on earthworms and slugs are notoriously hard to find, but one preserve in Will County is a hotbed of activity for Kirtland's. That preserve — which we're not disclosing in order to protect this rare species — is serving as a summer laboratory for folks from the Illinois Natural History Survey.

A recent petition to place this species on the endangered species list was denied by the U.S. Fish and Wildlife Service because of insufficient data.

The goal right now is to spend two years tracking Kirtland's snakes to learn as much about them as possible.

"We’re hoping to gain more demographic data on them," said Jaclyn Adams, a herpetology technician at the Illinois Natural History Survey. "We can look and make sure they’re reproducing, if the females are gravid, so we can see if this population is reproducing and can sustain itself." 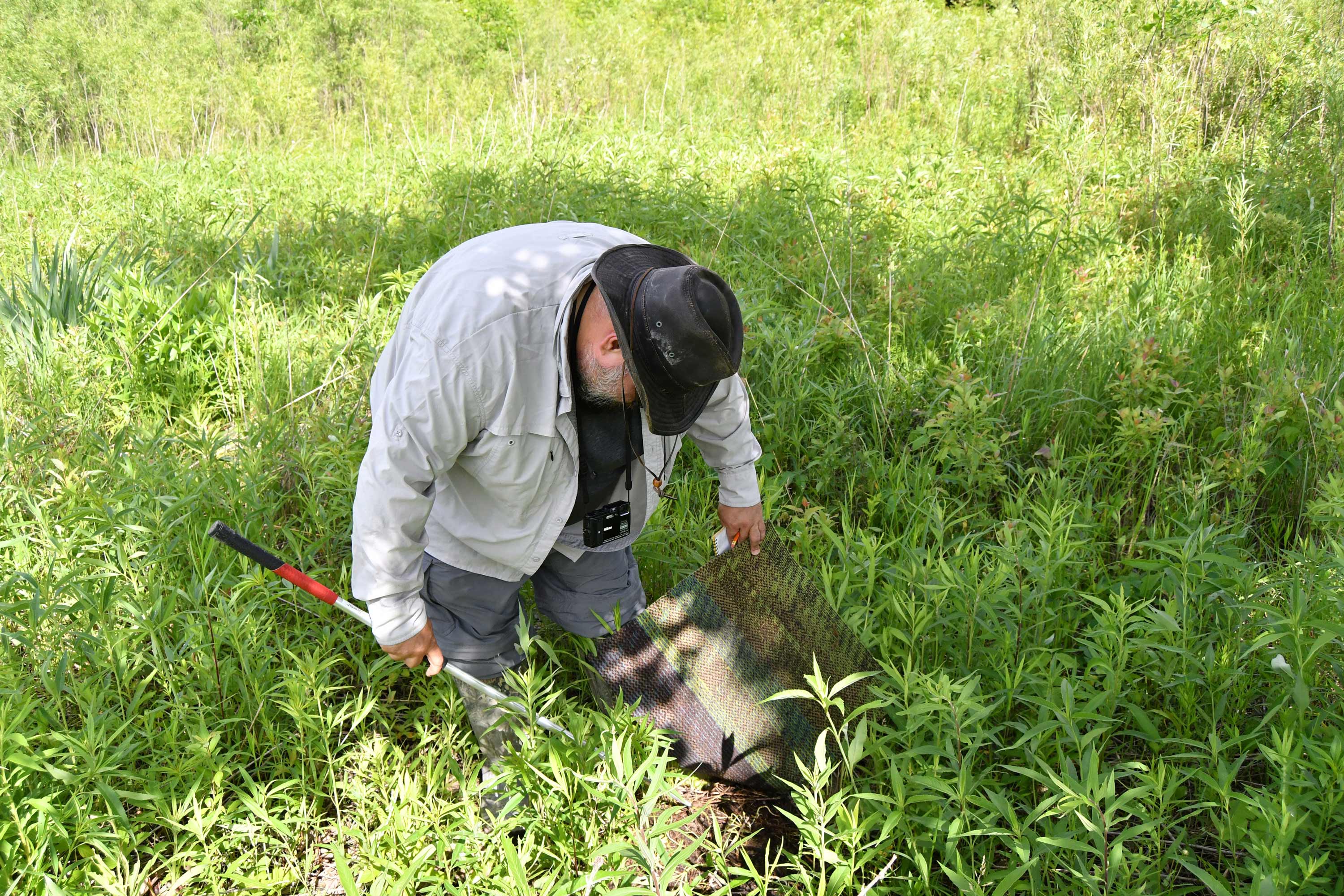 Michael Dreslik, an assistant research scientist at the Illinois Natural History Survey​, checks under one of the mats for the presence of a Kirtland's snake.

The site in Will County is only one of three being studied; the other two are in Sangamon and De Witt counties in central Illinois.

Adams said the Will County site is the best spot for the snakes in the entire state. 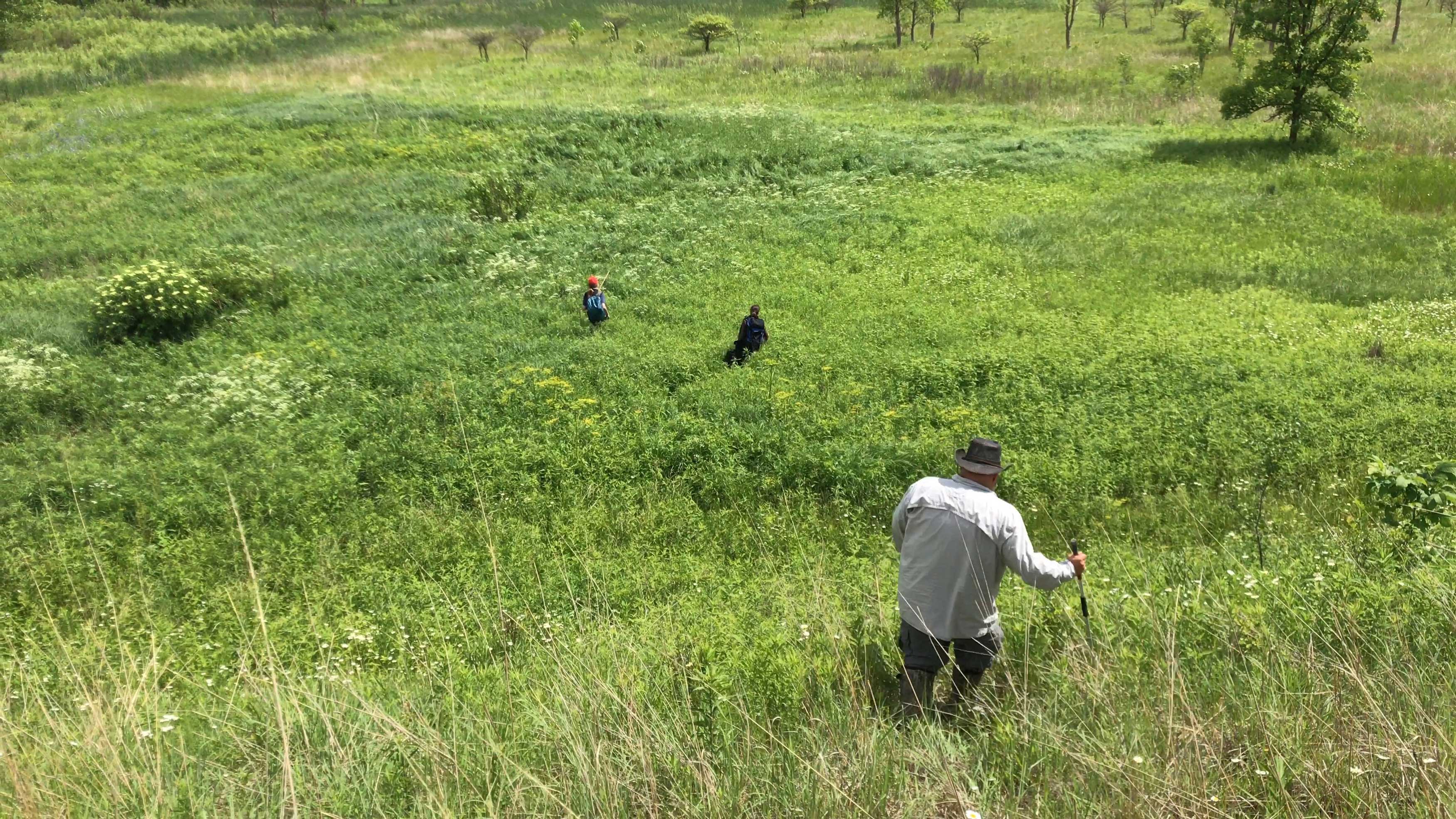 This site, which we are not disclosing to protect the snakes, is considered one of the best spots for Kirtland's in the state.

Timing can be everything.

"We try to time it when it rains," Dreslik said. "Kirtland's snakes come to the surface and are more active when it rains and it's more cloudy,"

The team descended on the preserve on a cool, partly cloudy day armed with the tools of their trade: hooked rods, scales, PIT (passive integrated transponder) tags, a tag reader and data sheets to record their findings.

Walking through a prairie of waist-high grasses, the team methodically worked the first segment of the preserve where mats had been placed 5 meters apart and marked with flags. The Will County location has a significant number of crayfish burrows, and some of those mats had been placed over them.

"(Kirtland's) spend a lot of time down in crayfish burrows, which is why this site is really great," Adams said.

In all, 200 mats are on the ground, each with a unique letter and number combination. One by one, the mats were lifted and checked.

As Adams lifted up one mat, a snake made a quick escape, shooting off into the grass. Based on its speed, she knew it wasn't the species she was looking for.

"Luckily the target species really doesn't move very much when you lift up the board," Adams said. "I've only ever had one move when I've lifted it up."

When they come across a snake other than a Kirtland's, they note where the species was found. The extensive data collection doesn't begin until they find the target species. 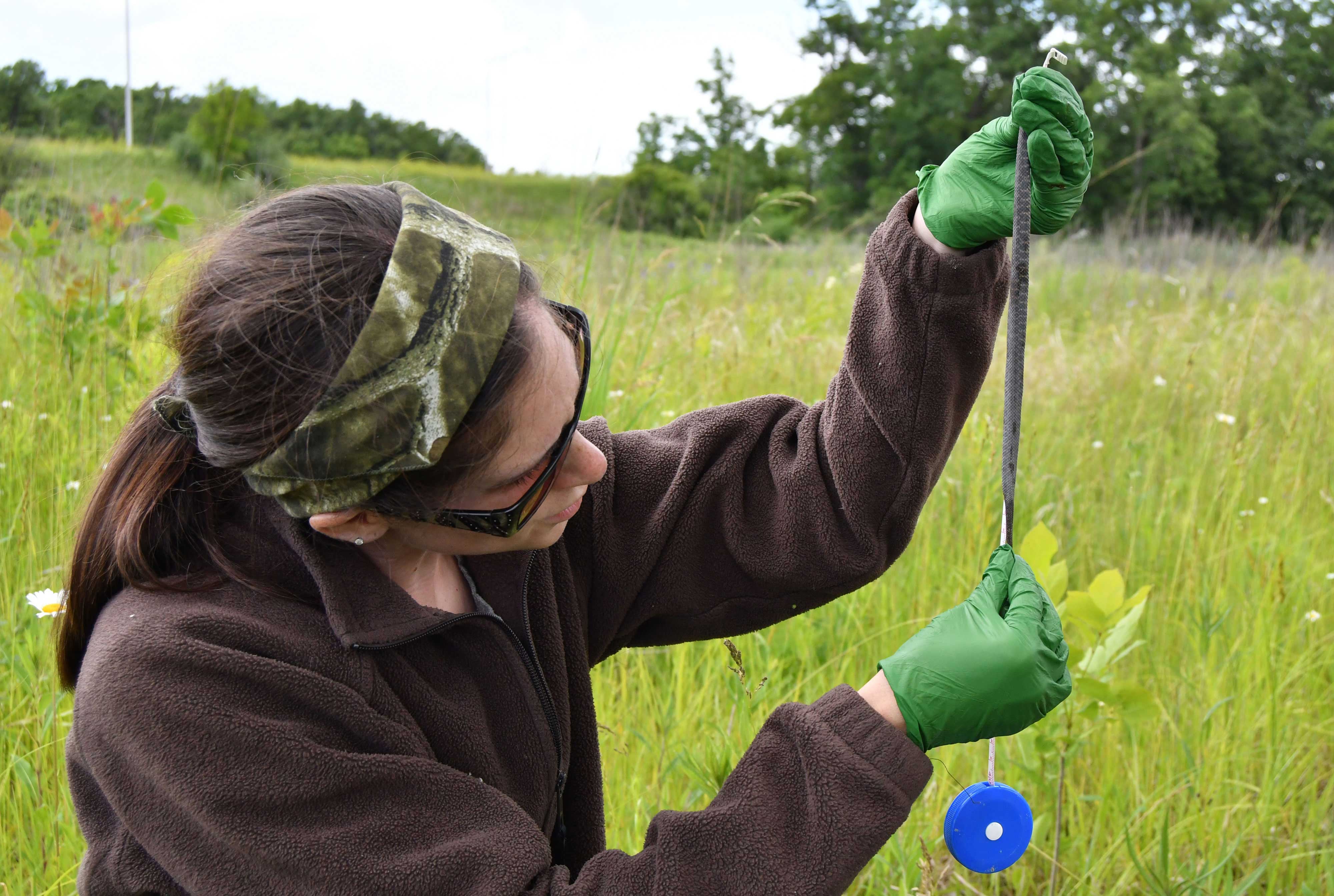 Data is collected on each Kirtland's found.

Once a Kirtland's snake is found and retrieved, it often exhibits one of the species' trademark behaviors. When they feel threatened, Kirtland's snakes will transform from their normal tube-like bodies to being completely flat and significantly wider than normal.

Adams carefully placed it in a bag so it could be taken back to a shady spot under a tree. That's where the real work began in a makeshift laboratory. 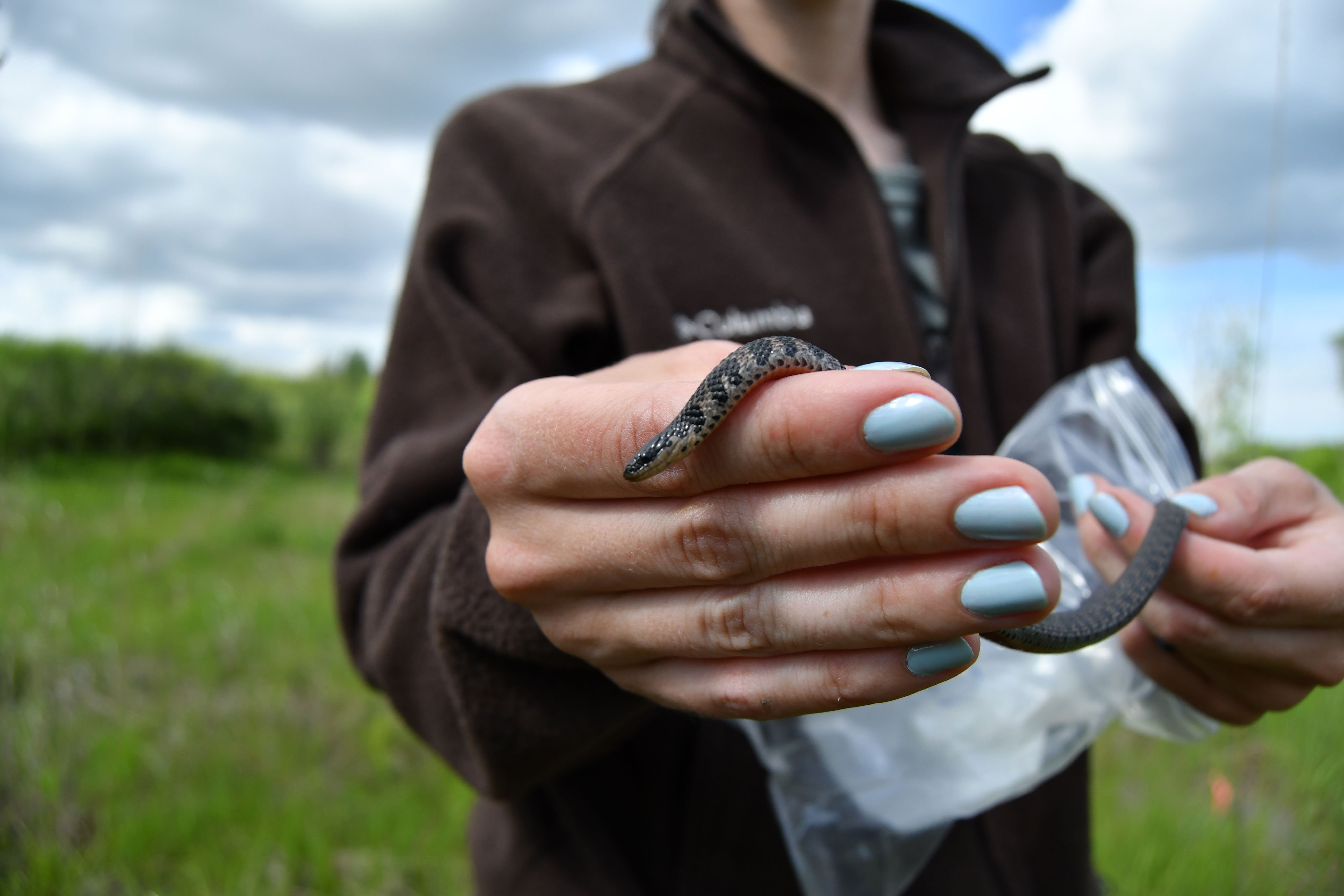 One of the Kirtland's snakes that was found during the survey.

The snake was scanned to see if it had previously been implanted with a PIT tag, which allows the researchers to track that specific snake. If no PIT tag was present, one was carefully inserted between the skin and body cavity. It's length, weight and sex also was recorded.

"We also feel them to see if they have food, and if it's a female, if it's gravid," Adams said.

Snakes also were swabbed and tested for any fungal diseases.

In all, nine Kirtland's snakes were located on two site visits. The team also found 82 other snakes. 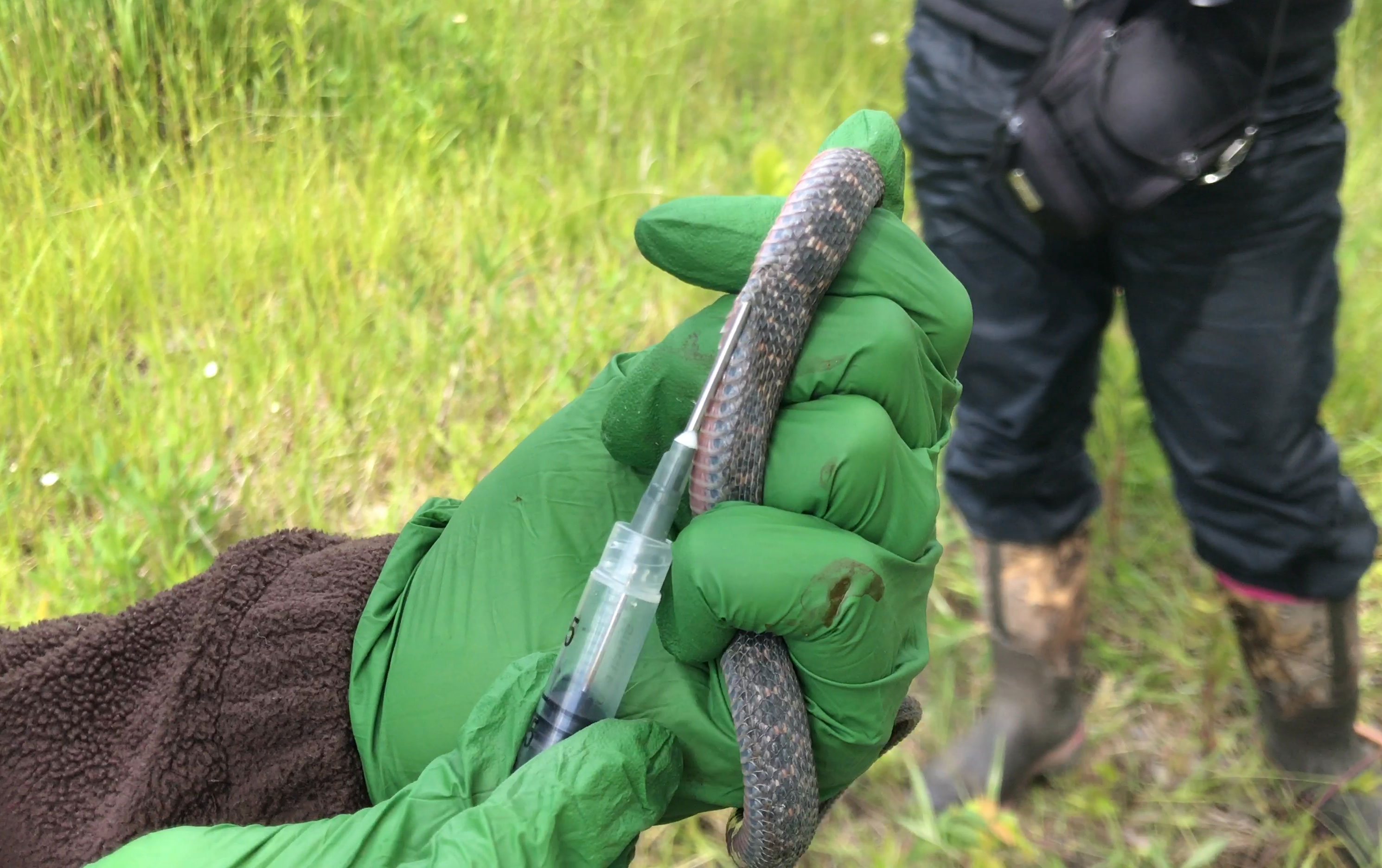 The snake is tagged so if it is found in the future, data can be collected and a history can be established for this particular Kirtland's. 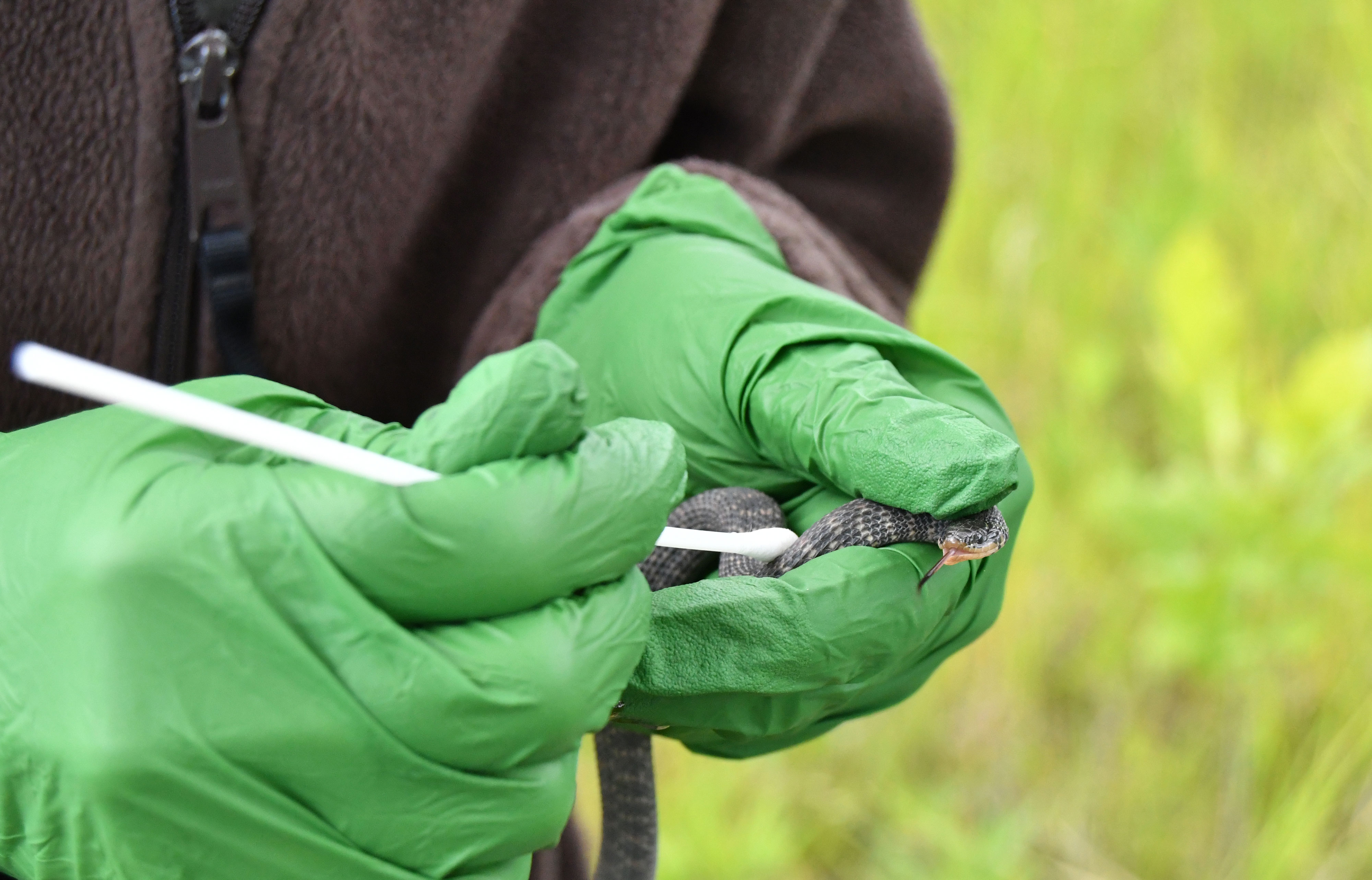 The snake is swabbed so it can be tested for any fungal infections.

Dreslik is taking a wait-and-see approach, as the Illinois Natural History Survey is only in the first year of a two-year study, which could extend to three years if funding becomes available.

"It will be two years of collecting the data and then we’ll see where we’re at," he said.

All the information will be used to put together a population viability analysis.

Even without the hard data complete, it's clear Kirtland's snakes face an uphill battle.

“They’re only found in general in a few states in the Midwest," Adams said. "They’re not really a widespread species. They’re a wet prairie species, and a lot of prairie is gone.

"Their habitat has really been destroyed."

Note: This initiative is part of a larger joint project funded by the Illinois Department of Natural Resources through State Wildlife Grants. Others involved in this effort include Dr. John Crawford with the National Great Rivers Research and Education Center, as well as Dr. Christopher A. Phillips and Andrew R. Kuhns from the Illinois Natural History Survey.