Blanding's turtles released into wild after being raised in captivity

Thirty-seven Blanding’s turtles raised in captivity by the Forest Preserve District of Will County are now swimming freely in the wild.

The turtles were transported from an indoor Will County forest preserve site to an undisclosed location in DuPage County. During the release a trio of turtle wranglers wearing chest-high waders braved the muck of a soupy marsh to set the turtles gently into the water so they could paddle away to freedom.

“We just slowly place each individual turtle out and spread them out some so they’re not concentrated or too close,” said Dan Thompson, an ecologist for the Forest Preserve District of DuPage County, who coordinated the release.

The batch of Blanding’s turtles was the first one raised by the Forest Preserve District of Will County, which joined a regional Blanding’s turtle recovery program in 2017 to help save the state-endangered species. The turtle program was spearheaded by the Forest Preserve District of DuPage County and it is overseen by the Illinois Department of Natural Resources.

Before their release, the turtles were first microchipped and the marginal scutes, or bony plates, near the edge of the turtles’ shells were notched with files to make sure each turtle is logged into the program and can be identified later. 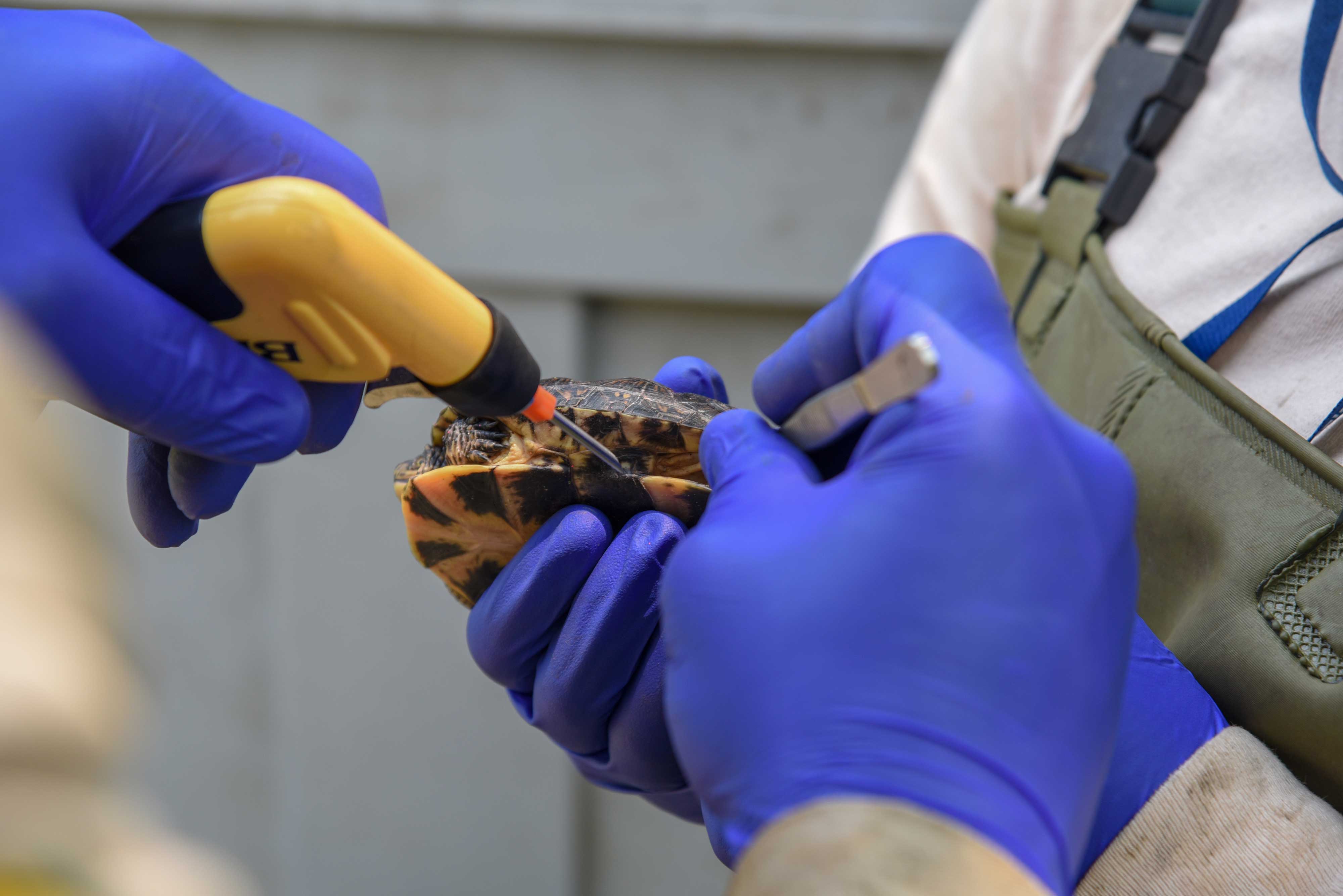 A microchip is implanted in each turtle prior to being released. (Photo by Chris Cheng) 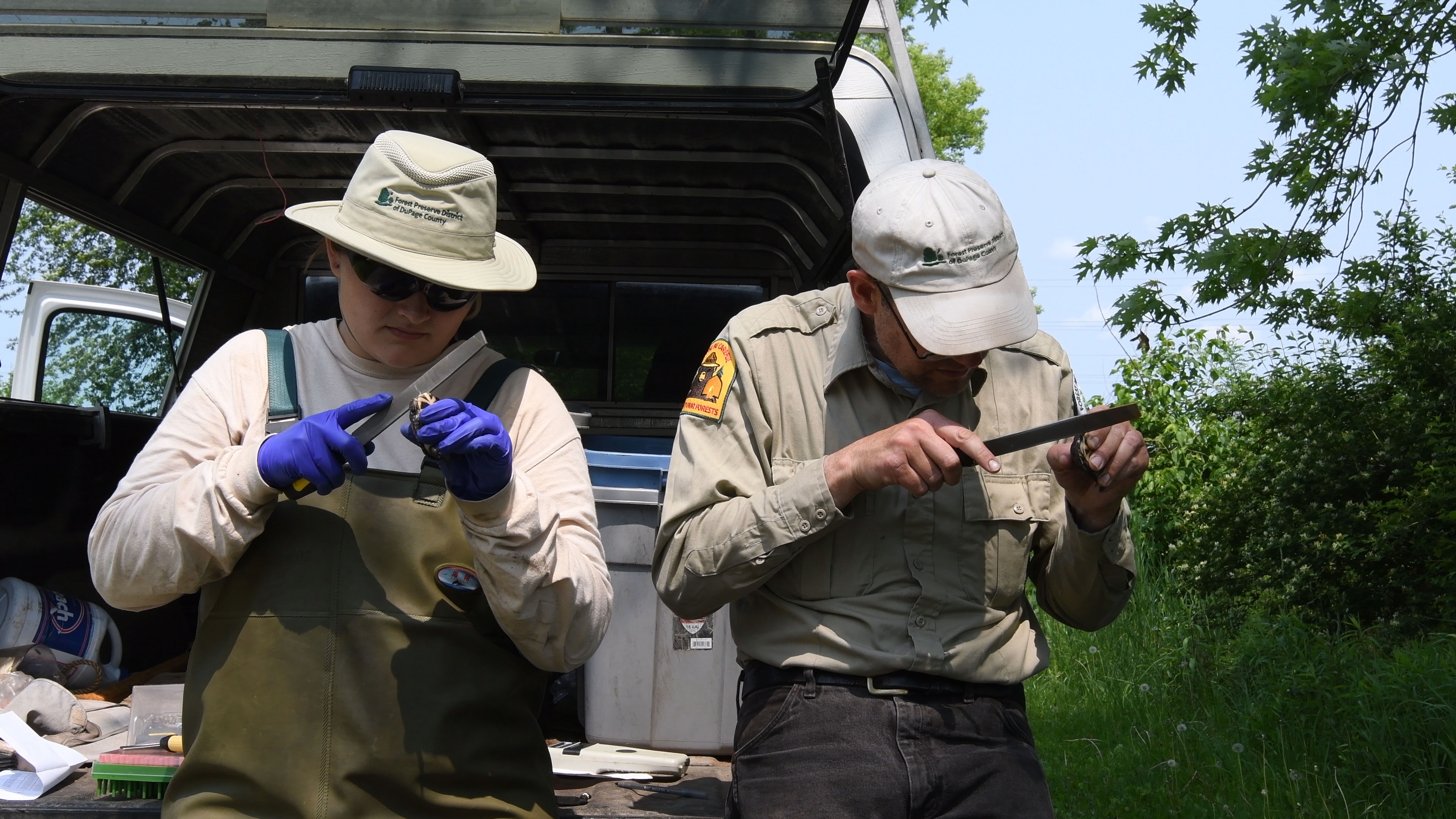 Both the microchips and the notching will help identify turtles during annual trapping efforts that are designed see if the species is rebounding. The notches also might save the turtles’ lives because the shell markings will make the turtles less desirable to poachers, Thompson said.

The microchips correspond with the painted number on each turtle’s back, which will fade with time. And photos are taken of the underside of each turtle, which is called the plasteron, because that too can help ID individuals. 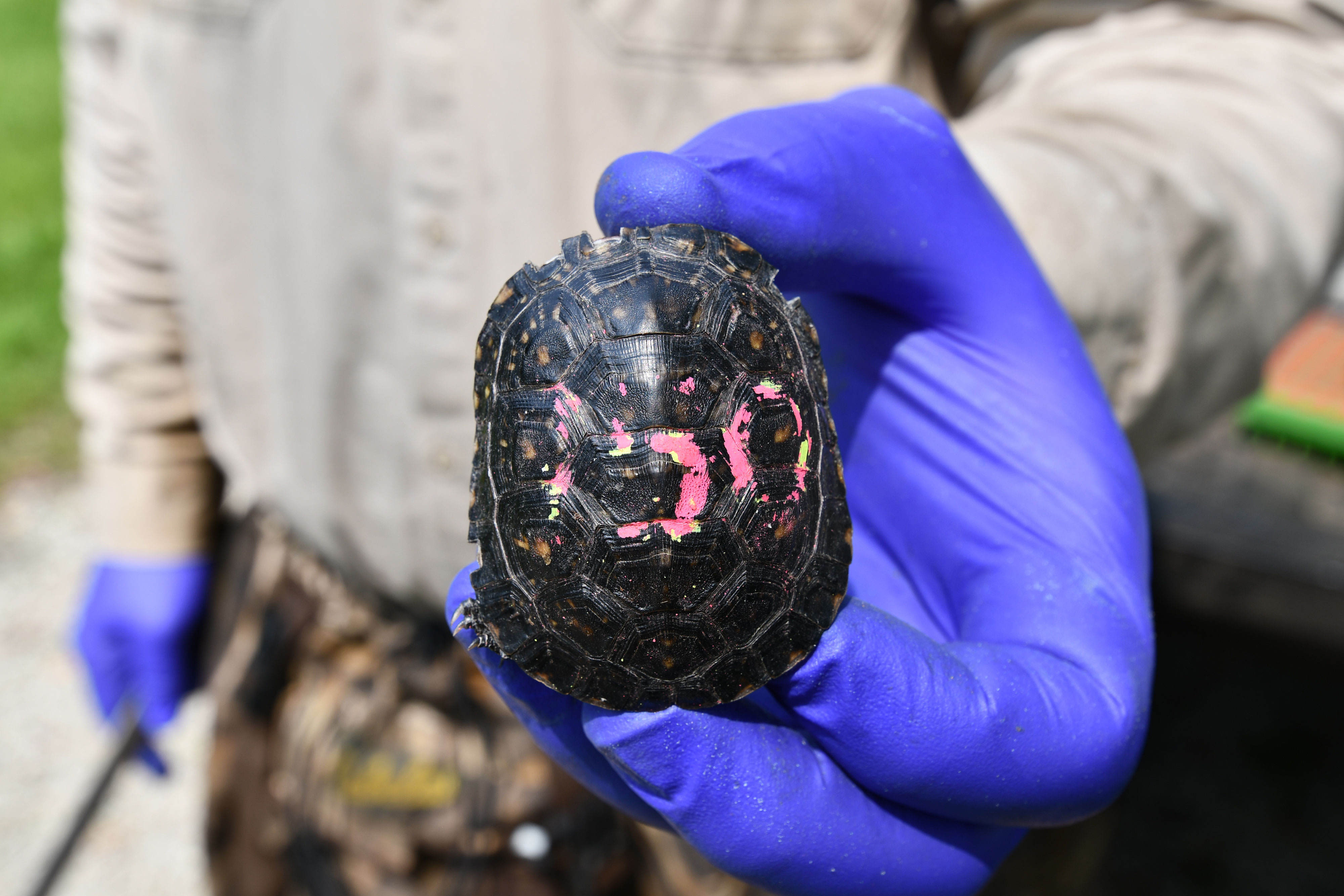 This turtle was microchipped and had a notch filed in its marginal scutes. (Photo by Chad Merda)

The program is designed to increase the odds that the species will survive. Releasing larger turtles, rather than hatchlings, gives the creatures a fighting chance and it is hoped their numbers will increase. A large percentage of the turtles perish as eggs or as newborns and many more don’t survive until age 1.

Blanding’s turtles are in trouble because they need a larger habitat to survive, they lay fewer eggs than other turtle species, their habitat continues to decline, poachers nab them, cars hit them, and predators feast on eggs and newborn turtles. 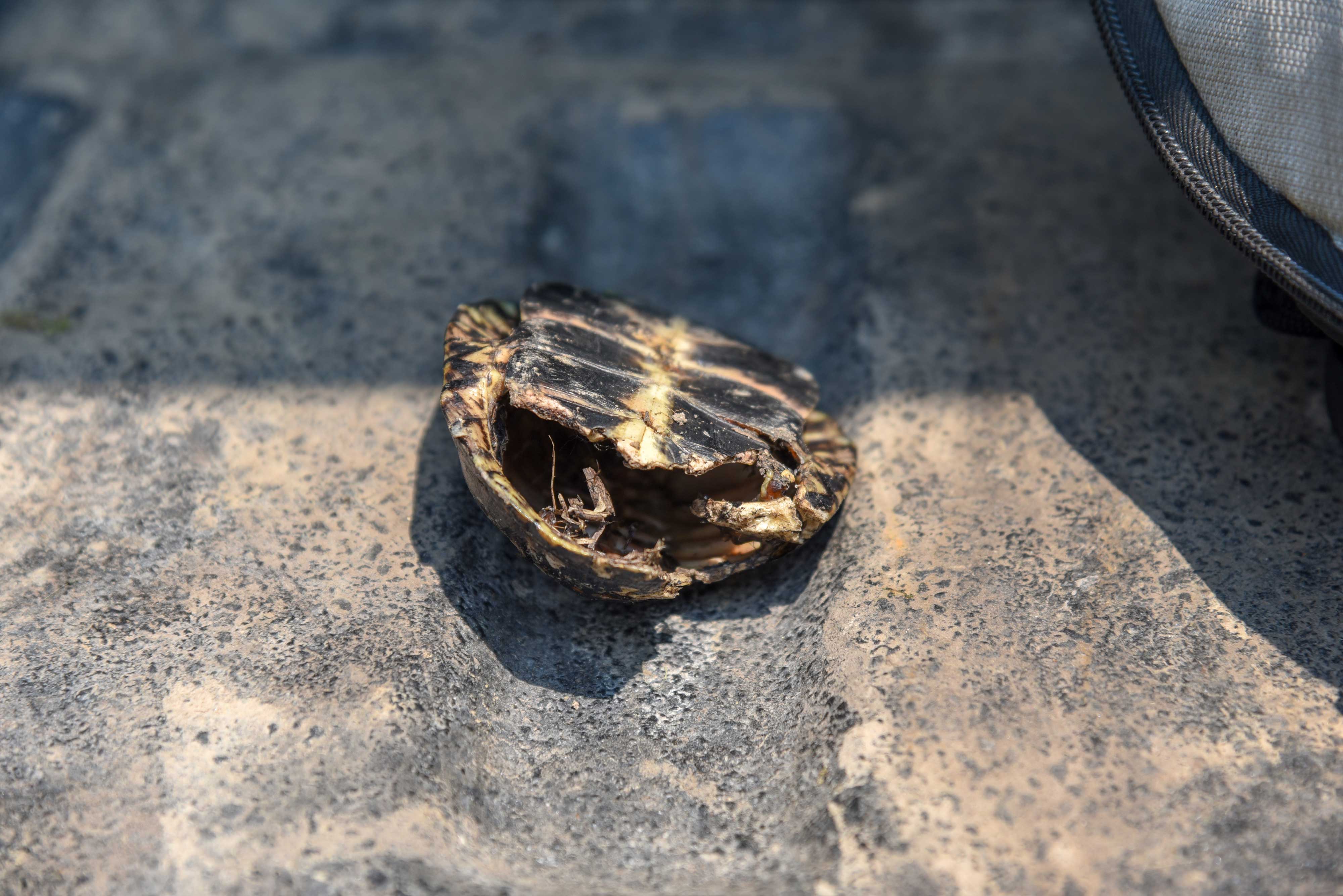 This empty shell was found on top of a muskrat den. (Photo by Chris Cheng)

Just prior to the release, Joshua Frushour, a natural resource technician from the Forest Preserve District of DuPage County, said he found an empty Blanding’s turtle shell on top of a muskrat den. It was a stark reminder of why the turtles are struggling. They are easy prey for carnivorous species.

“It’s the real life danger of being in the marsh,” Frushour said. “It’s not an easy life.” 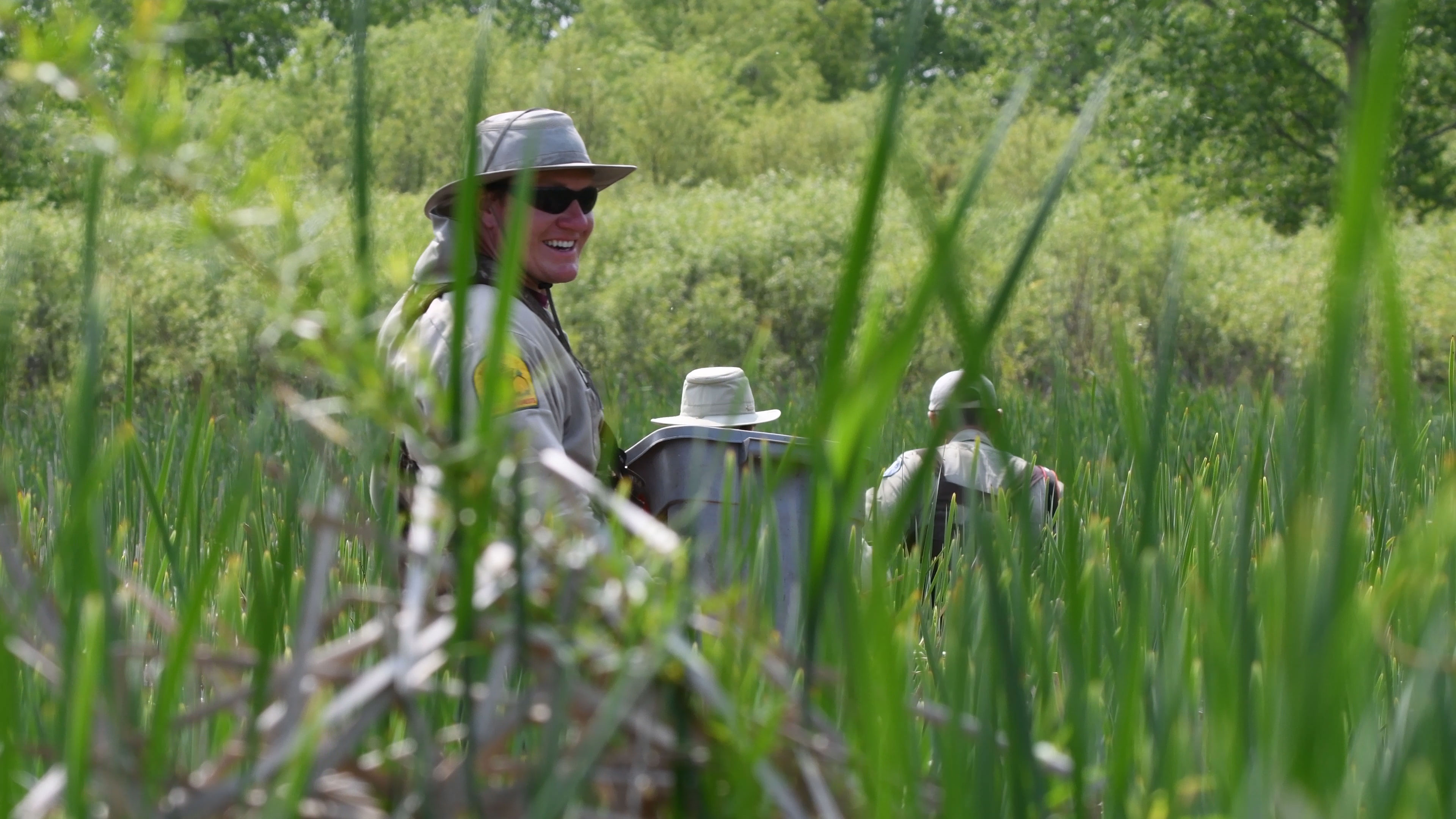 The turtles raised in captivity by the Forest Preserve District of Will County were carried out in bins and released in a DuPage County forest preserve. (Photo by Chris Cheng)

Since 1999, the Forest Preserve District of DuPage County has released thousands of turtles into the wild. The recovery program also is underway at Illinois zoos, universities and other northern Illinois forest preserves districts. All of the agencies are working together to raise hatchlings that can be released into natural areas.

Females of egg-bearing age are outfitted with transmitters that help researchers find them when they are ready to lay their eggs. “They mate in the wild and nest in captivity,” Frushour said.

Usually, the females are easy to find with the radio transmitter.

“But they do move around and throw us curveballs sometimes,” Thompson said. 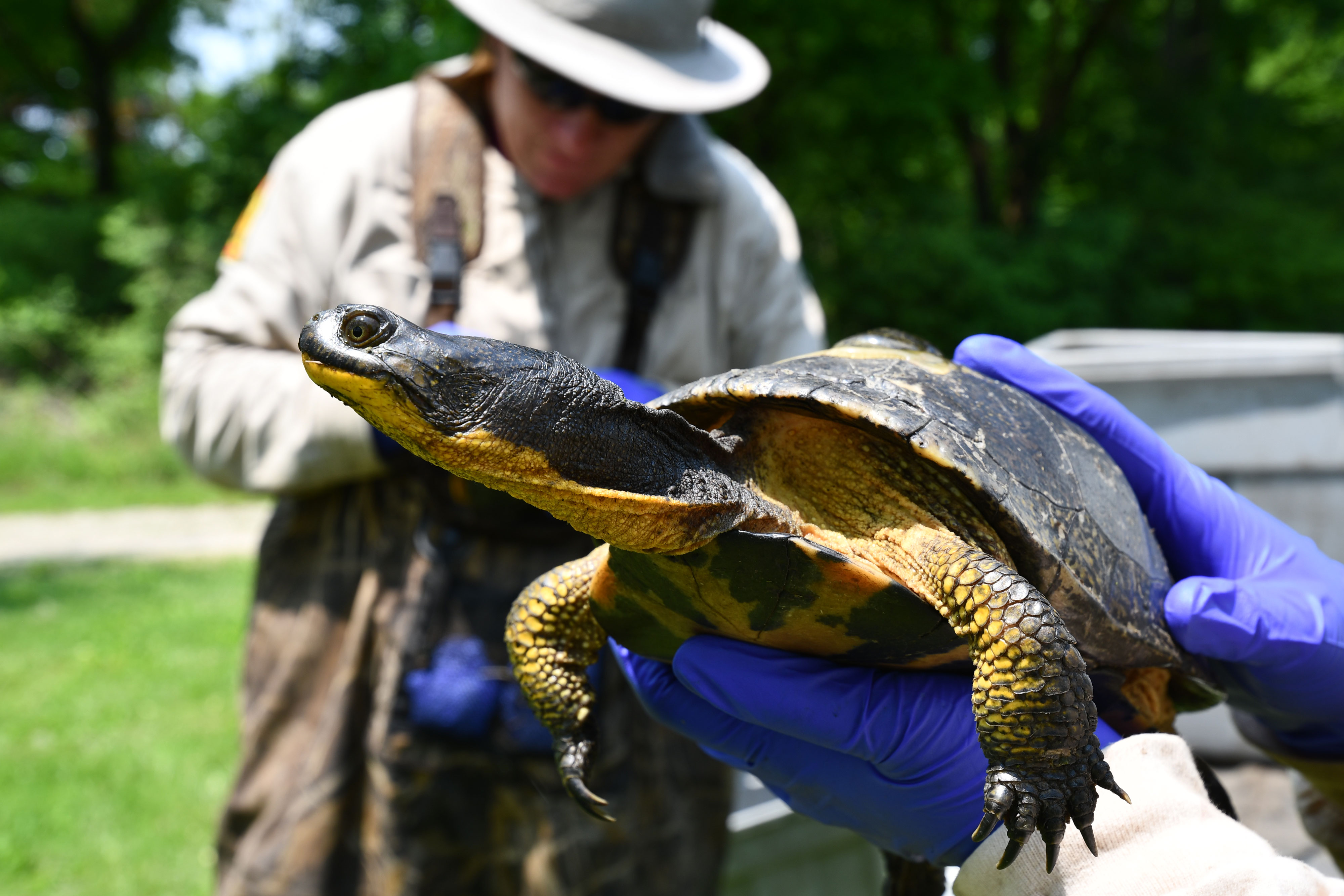 This Blanding's turtle, named Rachel, has produced hatchlings for the program. She is outfitted with a radio transmitter to make it easier for ecologists to find her. (Photo by Chad Merda)

Blanding’s turtles can live to age 60 and some make it to 80. “The older they get, the more prolific (the females) are and their eggs are of a higher quality,” Thompson said.

On turtle release day, Frushour had encountered Rachel, a veteran turtle the group was happy to see because of her success producing hatchlings for the program. “She’s like a great-great-grandma,” said Kathy Lech, a stewardship technician from the Forest Preserve District of DuPage County who was helping microchip and notch the turtles.

Turtles released into the wild do fine because there is no parental care after turtle eggs hatch.

“Even if they’ve been in captivity for two years, their native instincts are pretty intact,” Thompson said.

Frushour said his work with the turtles has been very fulfilling.

“I enjoy it a lot because I feel you’re helping to reestablish a species,” he said. “You get to build a connection with the turtles. Dan allows us to name new turtles if we find them. So I just found a new turtle and I’m naming it after my mom, Rhonda. It’s pretty cool.”

The whole point of raising hatchlings, microchipping and notching the turtles, and releasing them into the wild is to give the species a boost, Frushour said.

“The more genetic diversity, the better.” 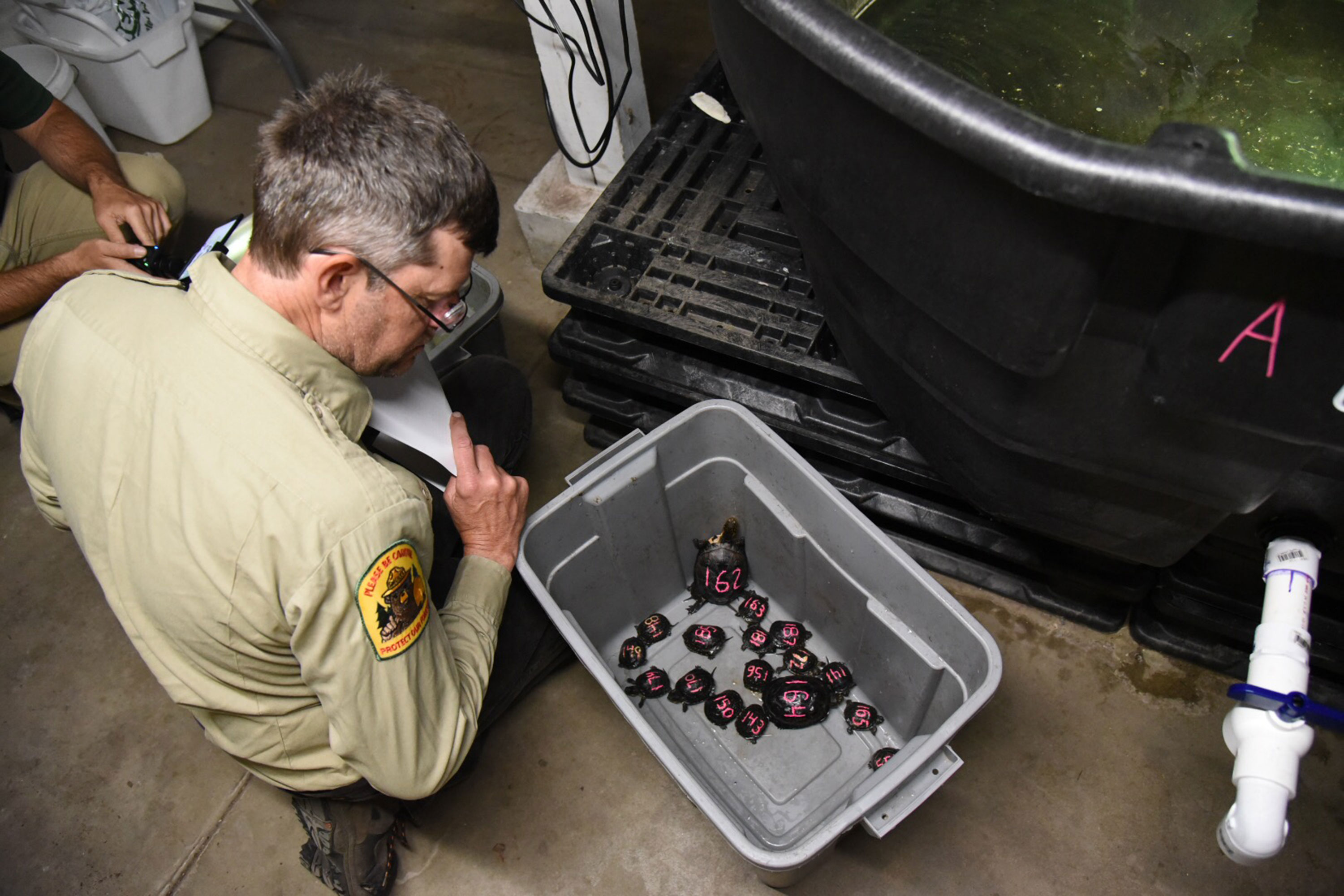 Dan Thompson, an ecologist for the Forest Preserve District of DuPage County, inventoried the turtles when it was time to pick them up in Will County. (Photo by Chris Cheng)

“We took regular measurements and checked their growth to see if any of turtles were plateauing or losing weight,” he said. “Basically, we were tracking their development and what they ate.”

Food was an issue for some of the turtles.

“They’re surprisingly particular,” he said of the Will County crop of Blanding’s turtles. “Some liked thawed frozen fish and shrimp. They loved salmon and crayfish. We keyed in on what they liked. We tried to get them on prepared turtle diets too, and we found they grow quickest when we could get that in their diet, but not all of them accepted it.” 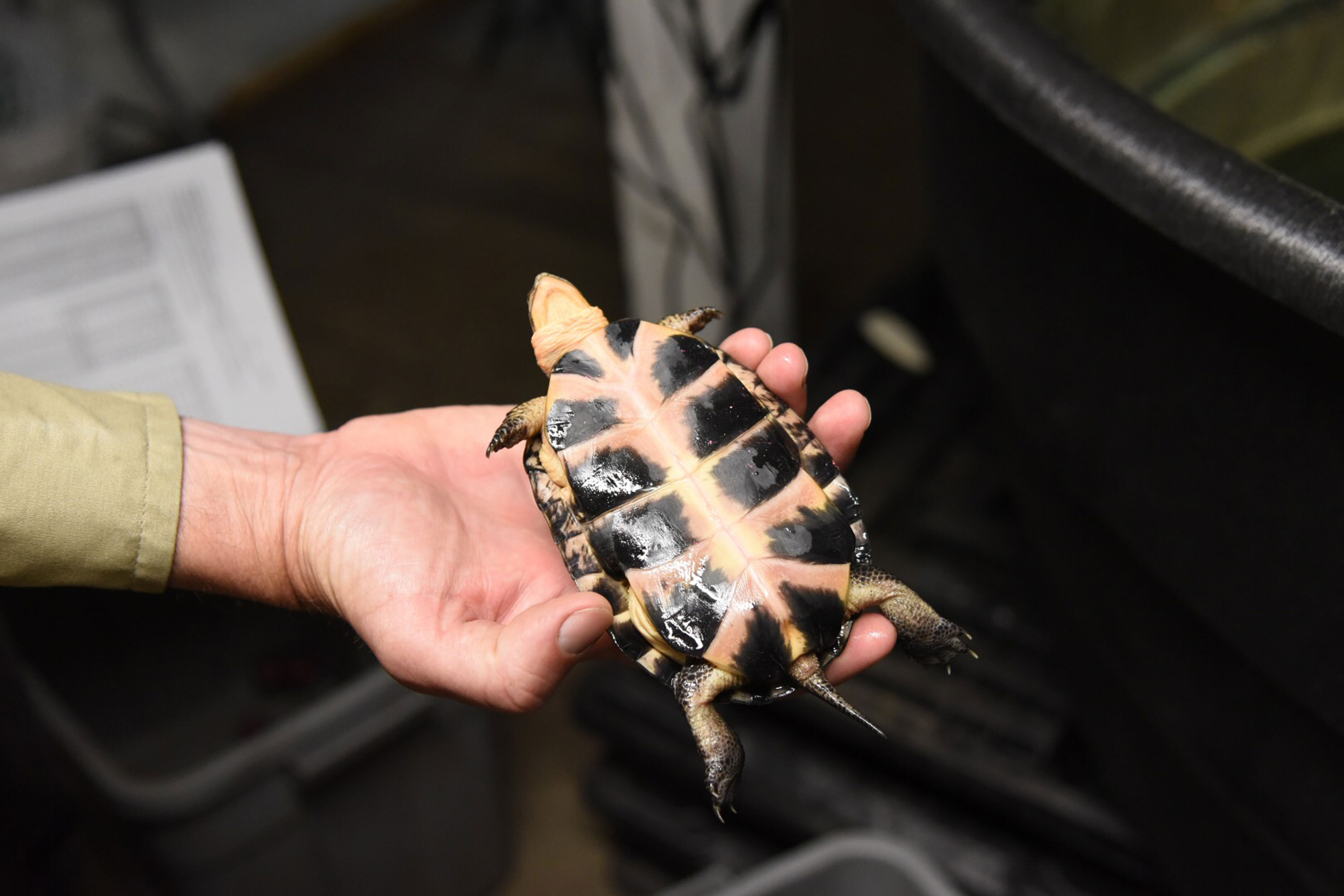 Some grew so fast that they were released early. But the bulk of the turtle batch was set loose in the marsh on release day.

“We hope we did enough for as many of them as possible,” Gutmann said of the hatchling program. “It has been a learning experience. We’re going to review our data and share what we learned and hopefully get together with DuPage County and some of the other partners and see what worked best.”

The Forest Preserve District of Will County continues to receive hatchlings in late summer or early fall for release the following year.

In addition to the Blanding’s turtle hatchling program, an educational component also has been established at the Forest Preserve District of Will County’s Isle a la Cache Museum in Romeoville. A turtle display tank was installed at the museum in 2017 and live Blanding’s turtles that shouldn’t breed due to genetic anomalies are on display for educational purposes.