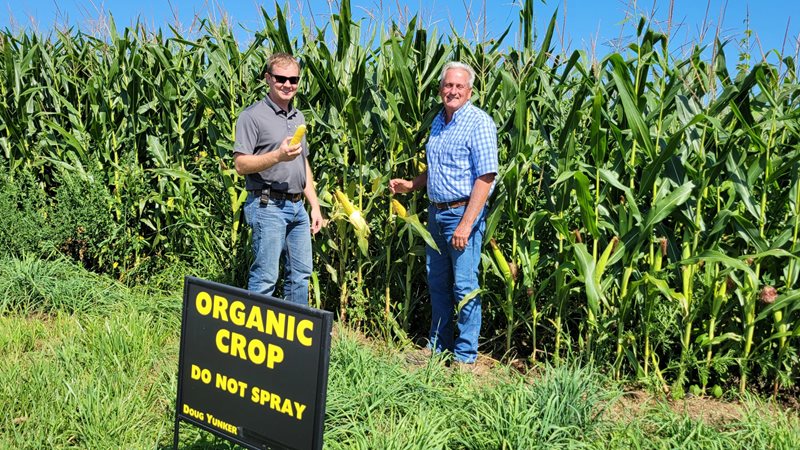 For the first time in the history of its farm license program, the Forest Preserve District is going organic.

The Forest Preserve’s Board of Commissioners approved the organic farm license on August 12, and it was awarded to Manhattan Township-based Yunker Farms LLC.

The farm is operated by Mark Yunker and his son Doug Yunker, third- and fourth-generation farmers. The Yunker family has been farming in the region for more than 100 years and they currently have around 2,000 acres where they grow corn, soybeans, wheat and hay.

The Yunkers have a six-year license for the Forest Preserve land, longer than a typical agricultural license, because it will take the family three years to have the acreage certified as organic.

During those first three years, no pesticides or herbicides can be used on the land, organic seeds must be planted, and cover crops must be used to prevent the growth of weeds. Winter wheat, rye and clover are planted as cover crops on the organic acreage.

There has to be something planted on the land throughout the entire year, Doug said. “Previous to us being certified organic, we hadn’t really done much with cover crops.”

The Forest Preserve District has 3,059 acres in its farm license program. Farming keeps invasive species and woody vegetation off the land until the District has the funds to restore it. Acreage that is farmed using organic methods will make the transition even smoother, said Ralph Schultz, the Forest Preserve’s executive director.

“As we move to restore those lands, we want those soils to be as healthy as they can be,” he said.

In the coming years, the Forest Preserve will work to transition more of its farmland to certified organic acreage according to National Organic Program standards, said Andrew Hawkins, the District's director of conservation programs.

"The goal is to have approximately 20 percent of the Forest Preserve's current agricultural fields in the transition process from row crop to becoming certified organic by the year 2030," Hawkins said.

"We were very impressed with the Yunkers, and I'm looking forward to this partnership," Blackburn said. "This program creates a diversity of crops in the Forest Preserve's agricultural lease program and it offers land equity for different types of farmers."

Wave of the future

The Yunker family’s willingness to try new farming techniques goes back decades. In the 1970s, when Mark joined the family business, he convinced his father to try no-till farming. At first his dad was resistant, but eventually he agreed to give it a try. Yunker Farms uses the method to this day because it prevents erosion and requires less labor and fuel for the same yields.

When Doug graduated from the University of Illinois in 2014 and came home with ideas about using organic techniques to farm some of the family’s land, Mark said he had to sit and think about it.

At his dad's urging, Doug started small, with only 40 acres going organic. But the Yunkers have slowly increased the certified organic portion of their business to 400 acres this year. And now they will be adding the Forest Preserve District’s 147 acres at Jackson Creek Preserve, which is near Mark’s home.

Doug, who is documenting his new farming techniques on the Yunker Farms YouTube page, said he’s hoping as he and his dad work more with organic fields, they will be able to use less chemicals on their non-organic acreage.

“I think it’s a good learning curve," Doug said. "It’s a way to reduce the weed pressure and the use of fertilizer and pesticides.”

The end result is healthy soil with thriving worms and microbes, the Yunkers said.

“We have to live here on this planet, and we have to try to make this Earth last as long as we can,” Mark said as he stood near a combine parked in an organic farm field near his home. “Because it’s not just for us, it’s for our grandchildren. It’s the wave of the future.”

Adding the first organic farm license is just one of several steps that have been taken in recent years to shift the District’s farm program from conventional practices to regenerative practices, Schultz said. The changes improve the soil structure, reduce erosion, increase the diversity of organisms in the soil biome, improve water quality and provide habitat for pollinators and other wildlife in buffer areas.

The organic farm license seems like a natural progression of the program, Schultz said.

“We anticipate that both our farmer and the Forest Preserve will be successful in the effort and that we can include this option on more of our farm acreage in the future.”

The number of agricultural acres will shrink through the years as more land is restored with native plant species or developed with picnic shelters, trails and other amenities. Farming continues on the remainder to keep the land as free of invasive species as possible.

Grants have been obtained and partnerships formed with a wide variety of agencies to help pay for and maintain the restoration work. Also, revenue generated by the farm leases is recycled back into the land natural resource management program.

“Ultimately, the goal is to restore around 50 acres a year, so eventually we will have restored everything,” Schultz said.