The art of beekeeping

In a roundabout sort of way, Mike Rusnak’s love of wild mushrooms eventually led him to an even greater passion – bees and beekeeping.

He loved hunting for wild mushrooms so he figured he would plant an apple orchard and, if the apple trees died, at least he would get some morels for his efforts. To plant the apple trees, though, he needed honeybees to help pollinate the apples. In the end, deer ate all of his apple trees, but in the ensuing time he became hooked on the bees.

“It’s just a really peaceful endeavor,” he said of the bees and beekeeping. “It’s relaxing.”

He has been beekeeping for more than 15 years now and, at one point, he had about 100 hives. Today, though, he has 50 hives spread across seven locations in four Illinois counties, including Will County at the Plum Creek Nature Center, where he serves as the resident beekeeper and holds educational programs throughout the year.

(Click and drag your mouse to explore all angles of the beehive. Note: 360-degree experience may not work on all browsers)

For Rusnak, beekeeping remains just a hobby – he has a full-time job apart from the bees – but he does hope to be able to devote more time to it once he retires. In the meantime, he’d like to keep his hive count right around 50, which requires several hours a week to maintain.

He estimates spending about 15 minutes per week per hive, although he said he doesn’t have to visit all the hives every week. Instead, he averages a visit to each hive about every 10 days.

As with many things in life, the efforts you put into beekeeping have a direct effect on the outcome, Rusnak explained.

“The more you put into it, the more you’re going to get out of it,” he said. 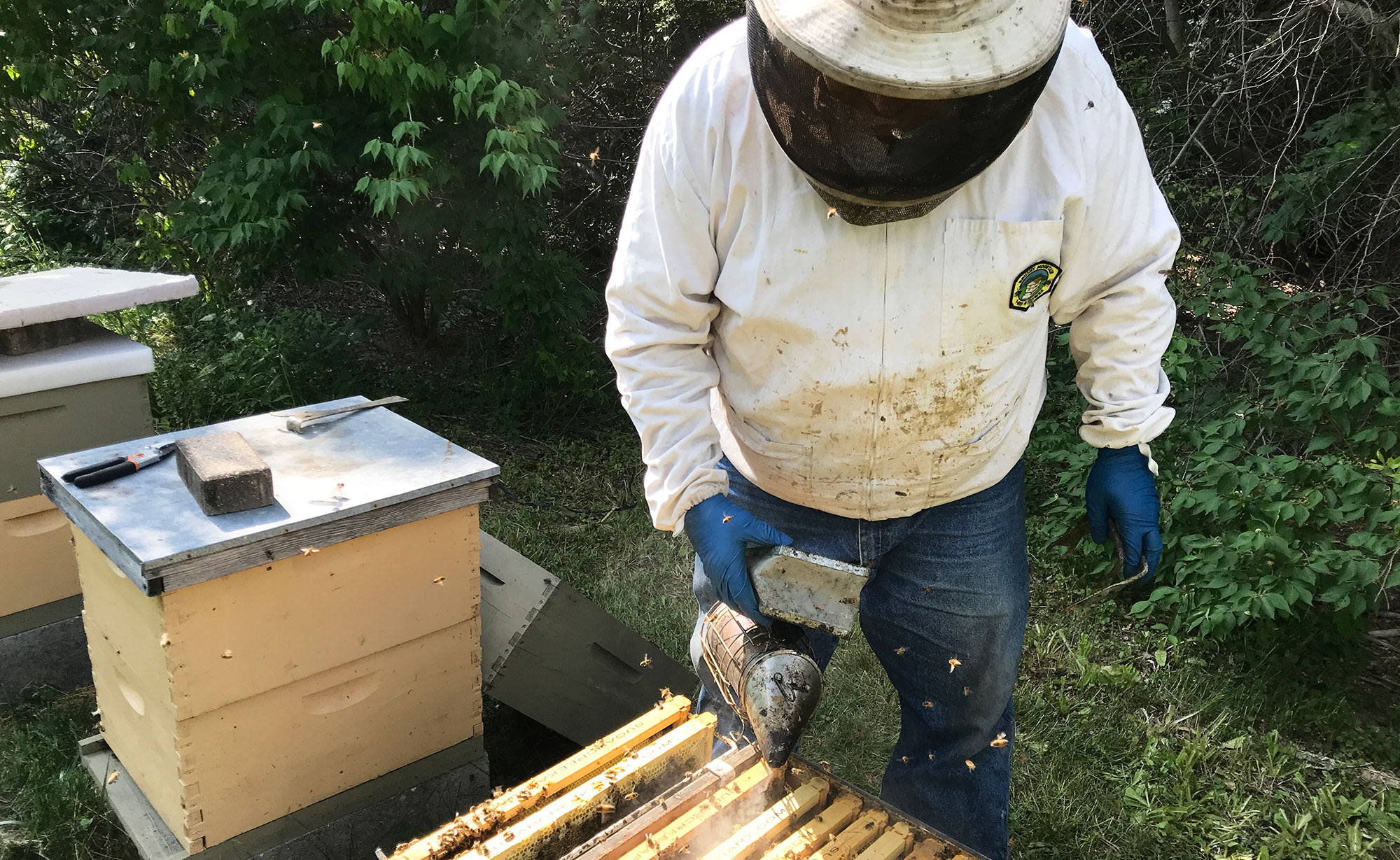 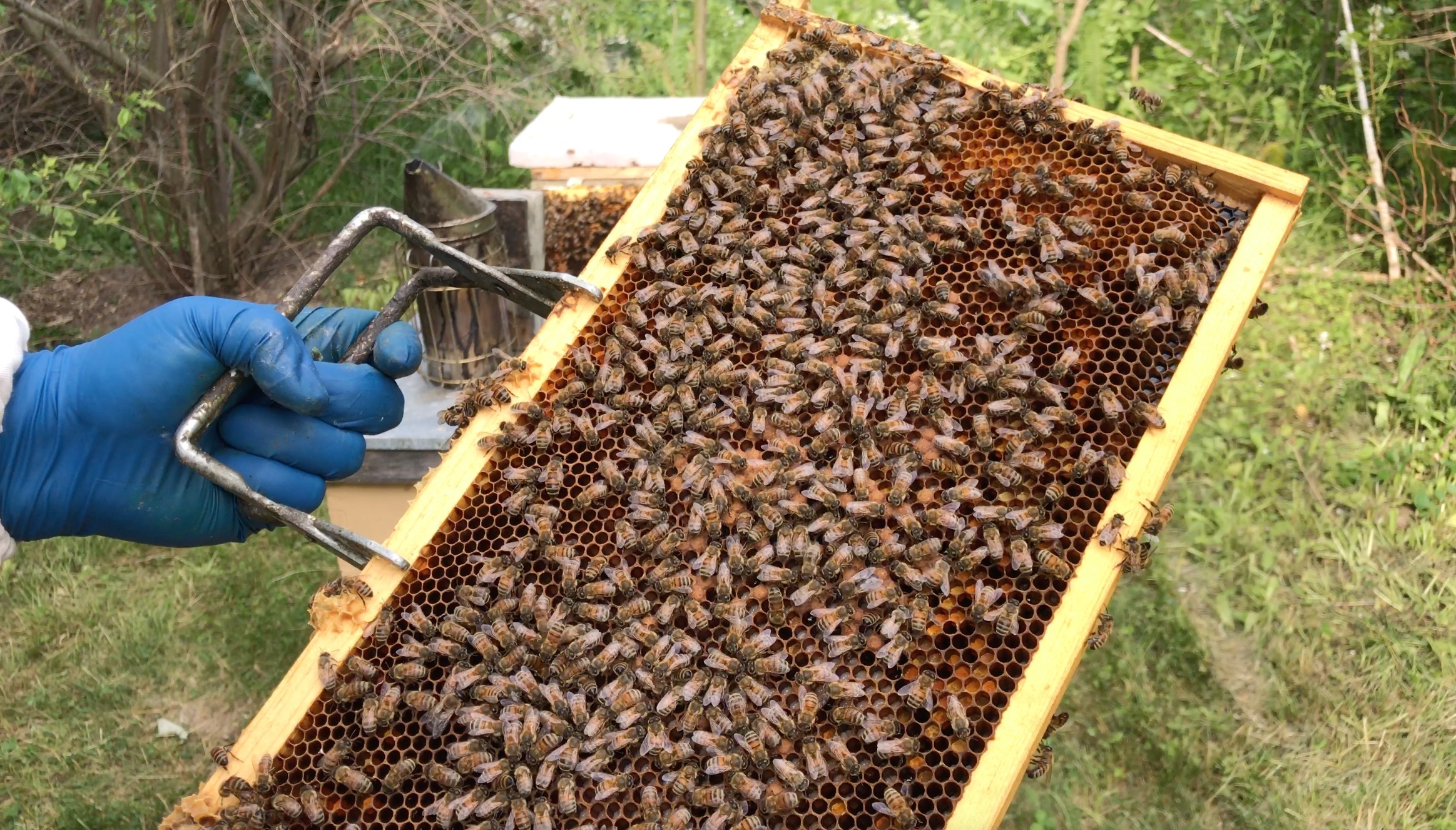 And what you get out of beekeeping is in large part measured by how much honey you yield each season. Rusnak said the average yield in Illinois is about 48 pounds of honey per hive, although he has heard of beekeepers who get as much as 200 pounds or even 300 pounds of honey per hive. To achieve that kind of output, you have to be a very experienced beekeeper and spend quite a bit of time with your hives, he said.

For his part, Rusnak hopes to get about 5,000 pounds in all this year, averaging about 100 pounds per hive. Harvesting the honey is one of the more time-consuming parts of beekeeping. “It’s a lot of work,” he said. In fact, he is taking a week of vacation from his full-time job the second week in August to devote to harvesting.

QUIZ: HOW MUCH BEE BRAINPOWER DO YOU HAVE?

Beekeepers process their honey in different ways, depending on their preferences and the preferences of their customers. Rusnak filters most of his honey twice, first through a 600-micron filter that removes large bits and pieces in the honey. The second filtering is done by heating the honey to 109 degrees and then pouring it through a very fine, 200-micron filter that removes nearly all the bits and pieces and even much of the pollen from the honey. A small amount of the honey Rusnak filters just once, through the larger filter, because some people prefer the more pure, untreated product.

Raw honey and local honey are all the rage right now, and Rusnak said those words have different meanings to different people. Raw honey is typically defined as honey that is not heated, processed or pasteurized. Because Rusnak warms his honey to run it through the second filter, his is not raw. But all the honey he harvests is local to his own hives, because he never mixes it with honey from other beekeepers.

Rusnak said he sells some of his honey to other beekeepers, but the vast majority is sold at Plum Creek Nature Center, where you can get a 12-ounce honey bear for $7.99. 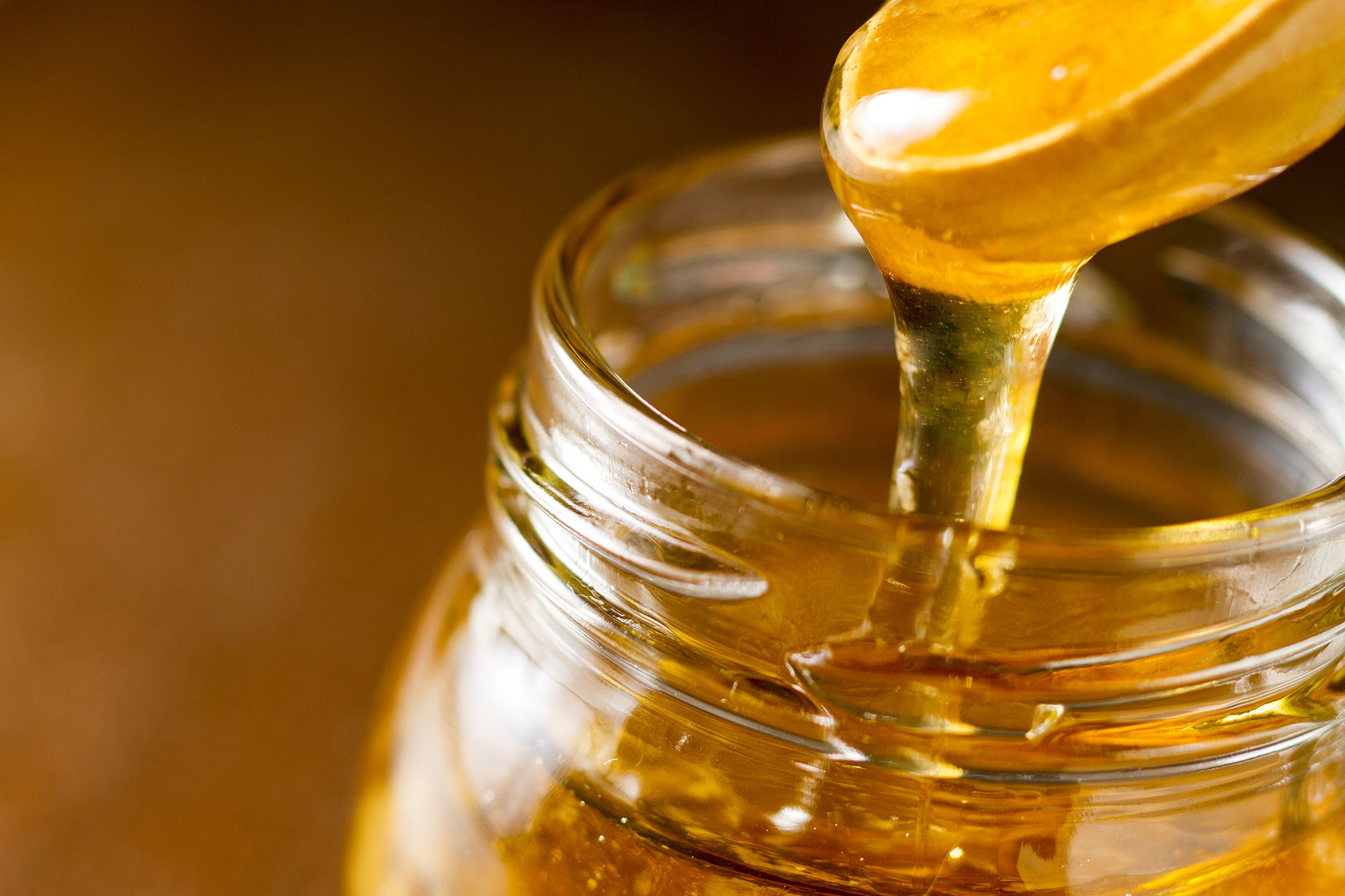 Bees – and honey too – are having a bit of a moment of late, with a lot of attention regarding the importance of bees to our food supply. Many of the foods we eat every day are dependent on honeybees for pollination, including cucumbers, watermelon, apples, peaches, cherries and many nuts, Rusnak said.

One of the primary threats to the bee population is the varroa mite, he explained. The mites must be controlled in the hives, which is one of the main tasks of beekeeping and hive maintenance. Controlling the mite has become easier with the use of oxalic acid, but Rusnak said it’s one of his most important tasks because the mite can take out entire hives if it is left unchecked.

With the growing popularity of beekeeping, particularly in large cities, Rusnak has some words of advice for anyone who’s thinking about giving beekeeping a try. First off, summer is not the time to start. Instead, spend these warm months reading about beekeeping – he recommends Bee Culture and the American Bee Journal  – and join a local beekeeping club. Rusnak belongs to many beekeeping groups, including the Will County Beekeepers Association, and visits many more on his travels across the country. He said beekeepers are very welcoming and eager to learn about other beekeepers’ experiences.

Rusnak emphasized that getting educated about the skills involved in beekeeping is very important, and anyone interested in starting a hive would do well to take a class. In fact, Rusnak teaches a six-week course at Plum Creek Nature Center in the winter months, which is a good time to learn about the craft in anticipation of spring.

He said new beekeepers should be prepared to spend about $1,000 to get started, but that shouldn’t be a deterrent to those who are interested. Rusnak said he finds beekeeping to be a worthwhile venture and also enjoys the camaraderie of others interested in the craft.

“Every day I learn something new about beekeeping and bees,” he added. 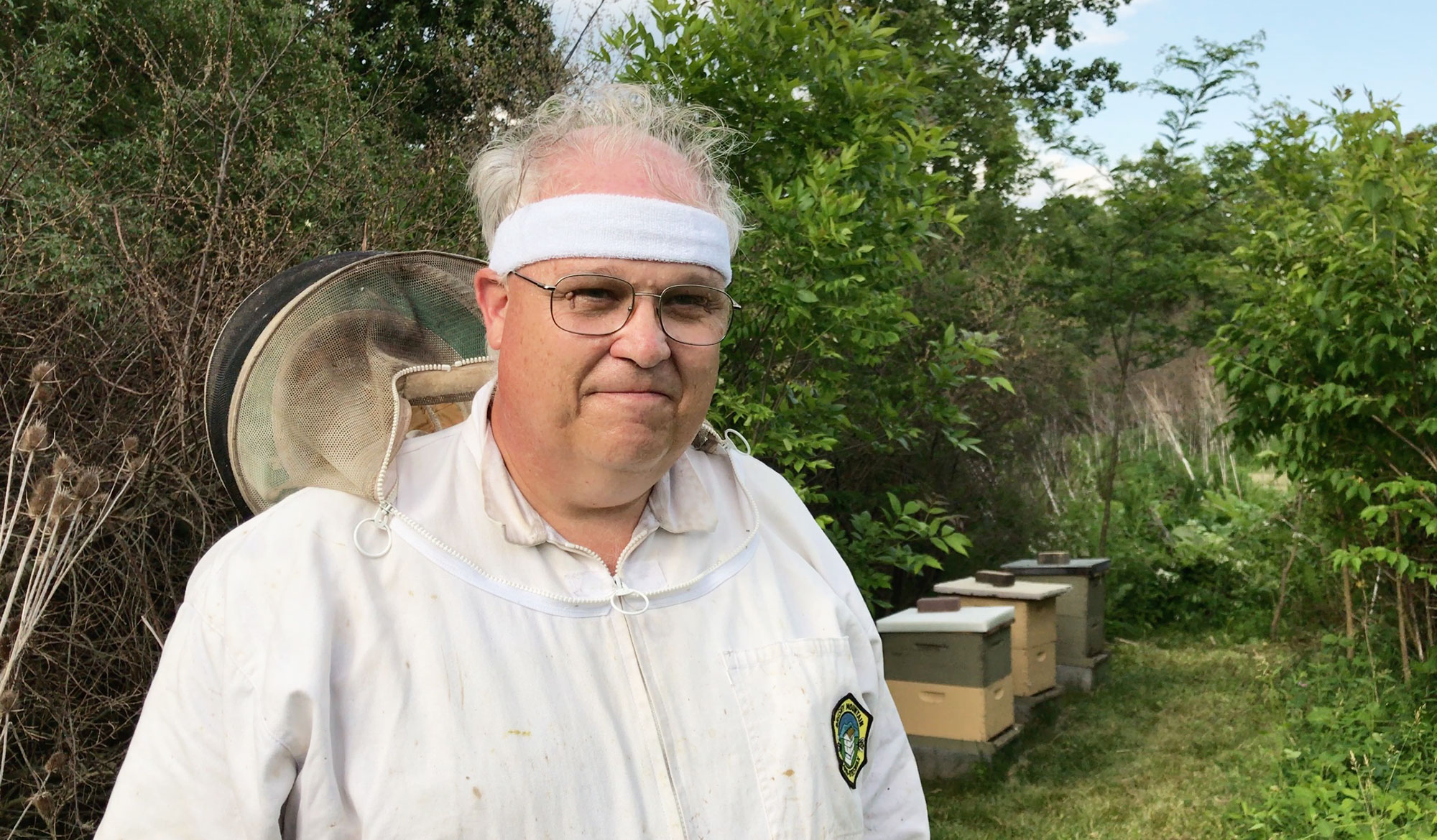